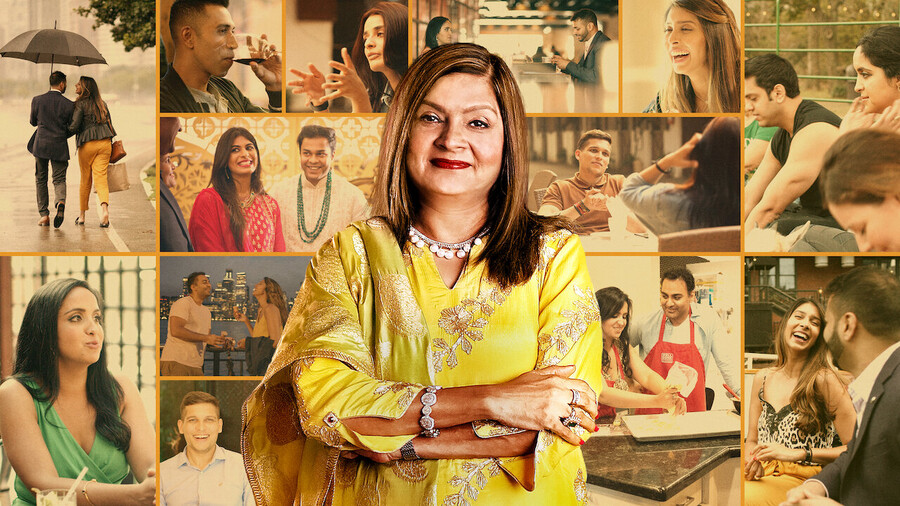 My cousin’s family is the richest family I’ve ever come in contact with in India. During one Ganesh Chaturthi, I spent an evening in their massive marble-floored apartment in Bombay, sitting at the feet of the biggest idol of a gold-leaf Ganesh I’d ever seen outside of a temple. My cousin’s family boasted about their son’s “love-cum-arranged” engagement to an extremely wealthy, pale-skinned Jain girl who grew up across the street. They had okayed the relationship, and their son courted her until they decided to get engaged. This was their idea of liberalism. Indian Matchmaking, Netflix’s latest viral reality series, reminded me of this protestation of progress. The show follows Sima Taparia, a high-end matchmaker based in Mumbai who sets up South Asians in the United States and India—that’s the extent of the show’s purview of diaspora—with potential spouses, while also lecturing them about being “flexible” and having to compromise in order to have a successful marriage.

Indian Matchmaking combines luscious scenery, glancing attention to its subjects, and an off-kilter soundtrack with the surface-level, life-makeover styling of Queer Eye and the gawk factor of Married at First Sight. The show supposedly offers an alternative to modern loneliness, giving a broad audience a chance to revel in the muck during a pandemic as we navigate a new reality wherein we’re dating new people, getting married, and breaking up with masks on. To Netflix’s average viewer, the show portrays arranged marriages as a fantastical, funny tradition to which privileged subjects choose to subscribe—for the duration of the show, at least. But to people whose lives are marked by the patriarchal violence of the “marriage market,” whose worth is determined by their identities and ages and bodies and potential to reproduce, this show uncovers a deep-rooted bigotry that’s not only familiar but also accepted as a way of life, yet does little to examine or counter it.

To dismiss arranged marriages as a system designed to straitjacket people is a “short-sighted, elitist explanation,” says Dr. Jaskiran Mathur, a sociology professor at St. Francis College. “Besides maintaining caste, class, linguistic, and religious endogamy, arranged marriages are a way to bring couples together in a social scenario where people are unlikely to have the opportunity to meet or choose partners. It’s a pre-global, market-capitalism solution that is constantly innovating, but has not yet relinquished its space to OkCupid and Tinder.” Ankita Bansal, a dark-skinned and beautiful woman who’s repeatedly derided for her looks and frame onscreen, calls it “manual Tinder” but with “families” in a conversation with her friends. Matchmaking is analogous to dating apps in that it replicates the checklist people often use in finding a partner—height appears to be a commonality—and through filters, dealbreakers, and preconceived judgments, both forms of finding a partner reduce the human experience to an algorithm.

Whether it’s through paper printouts or swiping screens, capitalism and love go hand in hand—money is inherently part of both equations, since a matchmaker gets paid in the same way dating apps do. Apparently, wanting a slim, tall, and “fair” woman is “wanting it all,” if we are to follow the show’s lead. In this way, Indian Matchmaking reveals all the isms associated with arranged marriages—colorism, casteism, sizeism, ableism, and classism—without criticizing any of it. By presenting the most troubling aspects of Indian culture in the light-entertainment styling of a cutesy reality show, Indian Matchmaking falls short of the expectations of a diaspora that has to respond to growing Hindutva in the homeland and contend with its increasingly right-wing sensibilities. With priests “face reading” and giving advice based on Vedic horoscopes, and not a Muslim in sight, the specter of Brahmanical fascism is very much present and unquestioned, reminding us that those at the top of a caste system are not just tyrants of the past, but that they continue to benefit in the present and control people’s futures—or their expectations of what their futures should hold.

Indian Matchmaking turns an oppressive institution into superficial fun by focusing on high-end Hindu and Sikh clients whose stations in life will largely protect them from the uglier aspects of marriage—people who can outsource, hire, and live off of family money or a high-paying job. (The number of blurred-out servants casually ordered around in the background of some of these households reifies the notion that classism, in this setting, is indeed a given.) It introduces several subjects to life coaches, as if an afternoon in an air-conditioned office is a substitute for therapy and work. But that is the lie of capitalism embedded in every matchmaking attempt: That with enough money and a tiny bit of time, the human spirit can be reduced to a body to evaluate, that you can solve all your problems and find the right way to live. Every episode is ripe with bigotry, with Taparia even telling a divorced woman she has to be sensible about her limited options because it’s a “fact of life” that it’s more difficult to pair a single mother with a new partner.

That’s not to say the show is insensible of these considerations. It brings them up, repeatedly, as food for thought, like it highlights coded words such as “similar background” or “community” (for caste), “good family,” (for traditional, no divorces, no dating, no feminism, lots of money), and “flexibility” and “compromise” (for a woman unquestioningly subservient to the rules of man and mother). We see the most oppressive aspects of arranged marriage through Akshay Jakhete, a man who knows nothing about what he wants in a partner except that she “be like his mother,” a woman now reviled for insisting her future daughter-in-law follow her rules and demands, for manipulating her son by showing him her blood-pressure readings, and for adhering to customs that many a desi would love to leave in the past. Of course, my revulsion for matchmaking is tempered by my privileges as a “suitable” person who also wouldn’t be forced into an arranged marriage.

The specter of Brahmanical fascism is very much present and unquestioned, reminding us that those at the top of a caste system are not just tyrants of the past.

“Biodata,” a sheet of paper with my statistics on it, could possibly do well if I leave off a bunch of other information. Even if it’s your auntie handing out your biodata, marriage is a historically financial, transactional, strategic relationship, and class is hardly left out of the conversation. Like all things under the patriarchy, arranged marriages don’t present equal choices—often it’s the woman who has to contend with “aging out,” pleasing her in-laws, never owning her own life, and worrying about her dowry (a topic entirely skirted by the series). It’s a common sight to see a desi bride cry at her departure from her family’s home—and why she cries is tacit common knowledge. Marriage is a maturation of physical, emotional, and sexual labor. The show doesn’t set its subjects up for success, so it is no accident that no matches lasted.

Aparna Shewakramani, the show’s model minority, is positioned immediately as someone the audience should hate: She’s a straight-buttoned lawyer who hates her job and seemingly lives in fear that she hasn’t lived the “right way,” and most egregiously, she’s “picky” about who she ends up with. It becomes easy to hate people, especially women, who won’t get out of their own way. We meet Pradhyuman Maloo, a snooty, rich, light-skinned Bombay boy who can’t keep up with his own pretensions as he mispronounces “amuse-bouche” while serving nitrogen-fired fox nuts to impress the cameras. He’s so preoccupied with image and possession that his closet has a fingerprint lock and handles emblazoned with photos of himself. Introduced immediately to these alienating characters, we’re balanced out by Nadia Jagessar, a Guyanese American woman who seems overly eager to like the frankly scornful and inadequate men she meets.

This rotating cast of characters can hook any audience: Why would Aparna agree to be on this show? How gauche can Pradhyuman get? Will Nadia ever be treated well by a future partner? These questions abound in the viewer’s mind and remain unresolved, as Indian Matchmaking never spends enough time or pays enough attention to its subjects to ever find a way to wrap up their arcs—which perhaps is the show’s main failing, its inability to go deeper and stay longer. “It feels designed to binge-watch. Each episode ends with a cliffhanger and then it quickly autoplays,” says Meenasarani Murugan, who teaches in the Department of Communications and Media Studies at Fordham University. She anticipated that the “Hindu high-caste/heteronormative nonsense” would bother her, but she was also disturbed by the show’s structure. “Why do they keep bringing in new people and not really completing their stories?” Murugan added.

Threads are left hanging. Multiple stories are forgotten. New subjects—increasingly more likable and more mistreated by the matchmaking process—are thrown in until confusion abounds. Taparia, an unkind, unthinking, and glib matchmaker, casts herself as a do-gooder to whom God has given the task of taking matches made in heaven and making them “successful on Earth.” Taparia fails at being a guide for the viewer, through her repeated, alienating insistence that her work is “very hard,” her despair that people are less “flexible” these days, her seemingly untempered appreciation of the status quo as she bandies about colorist, fatphobic, sexist, and oppressive judgments about subjects—saying Ankita wasn’t “photogenic,” with photogenic meaning skinny and pale. More subtle is Taparia’s code-switching—“fairness” comes up a lot more when she’s in the homeland than when she’s abroad. It is hard to believe she really wants to improve the lives of people she appears to scorn so much.

Instead of leveraging matchmaking into an opportunity to critically engage with how patriarchy and the caste system continue to impact marriage in South Asia and its diaspora, the show instead chooses to offer no commentary about the many issues it points to. Matchmaking, at its heart, is an exercise in eugenics: By searching for a “girl” who’s taller than 5’3,” pale-skinned, and educated enough to speak English but not too much English, it becomes clear that both the matchmaker and family are looking for an incubator rather than an equal partner. With unexamined, failed intracommunal (if not arranged) marriages looming in the past of three characters, and subjects who seem incapable of carrying on a conversation, much less an entire lifetime with a stranger, the show doesn’t seem to make an argument for this pattern of partner-procuring. It reproduces intimacy in rom-com-esque moments as Pradhyuman arranges a first date at a horse stable—posturing after Western capitalism—like “something out of a movie.” It shows us lavish interiors of houses most of us will never visit, much less inhabit, reminding us how relationships can be transactional. Maybe it is showing us a hollowness, a rot at the center of capitalism’s influence on Indian culture. Maybe it is trying to tell us more than many of us are hearing. But maybe it’s just reality television, and we’re seeing our own baggage reflected back at us.

Read this Next: (Un)happily Ever After? 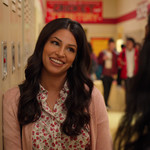 by Sanjna N. Singh
These stereotypical depictions ignore, to their detriment, the fact that many arranged marriages are consensual.