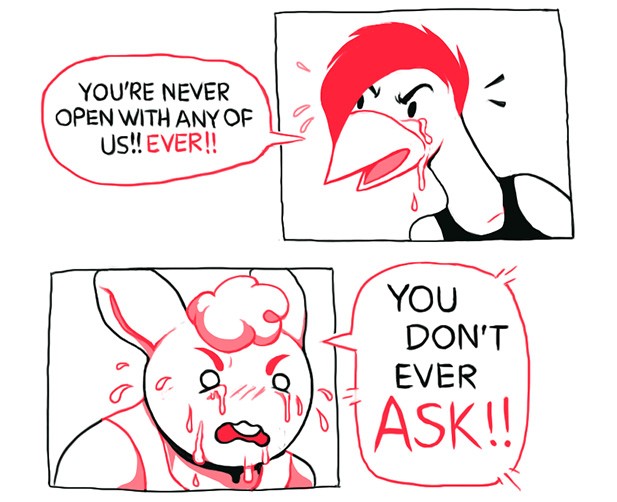 As much as being queer is exciting, there are many hardships that come along with everyday life. Roommates can be difficult. Lovers can be awful. Casual dating in a small community can become awkward fast, because everyone seems to know each other. When one person hurts, everyone shares their pain, and an entire network of friends and partners are affected.

Web comic Little Teeth explores these complicated queer dynamics. Written by J Bearhat and illustrated by Rory Frances, the comic series, published by literary website Hazlitt, stars a group of queer and trans anthropomorphic animals living together in a progressive city. The cast includes a young queer fox girl who serves as a big sister to her friends, a wolf boy dealing with a string of bad boyfriends, and a plump reptile named Swampboy who has a tendency to show up randomly and entertain himself at others’ expenses. Every character stands out from one another, and no two animals feel alike.

Little Teeth began in September 2015 and is published on a monthly basis. Each installment (which the creators describe as “parts” that make up “seasons,” rather than the typical way comics are described—as issues) focuses on the highs, lows, and awkward moments that come with dating in the queer community. In the beginning of the most recent part, “Little Teeth Returns Pt. 1,” a group of four nonbinary roommates fight with one another as they watch a gay sitcom on TV. As they stumble through opening up about their problems, they make little progress, and the conversation results in a lot of crying.

While Little Teeth focuses heavily on queer representation, the series certainly isn’t a romanticized look at the queer community. Hang-ups and baggage appear throughout the world, and one wrong move can turn a cute date with a rat boy into an awkward sobbing fest.

“Basically, they have the kind of messy but mutually supportive dynamic a LOT of weirdo poor gay/trans kid houses tend to have,” Bearhat explained in a Tumblr post.

When I sat down with Frances and Bearhat for an interview on the eve of the publication of “Little Teeth Returns Pt. 2,” they explained the motivation behind their world in a bit more detail. Instead of drawing directly from their life experiences, Bearhat told me, they wrote Little Teeth’s world in the style of the indie pop band Los Campesinos!—creating stories that sound plausible without necessarily being autobiographical.

“Early on I was like, oh, I want to write specifically about ‘hurt’ within queer communities and the way people can hurt each other,” Bearhat said. “Not necessarily in a malicious way, but very much so where it’s just like, people bring their own hang-ups and damages and stuff into their interactions. But because it’s just such a tightly knit community, that stuff just kind of travels all over.” 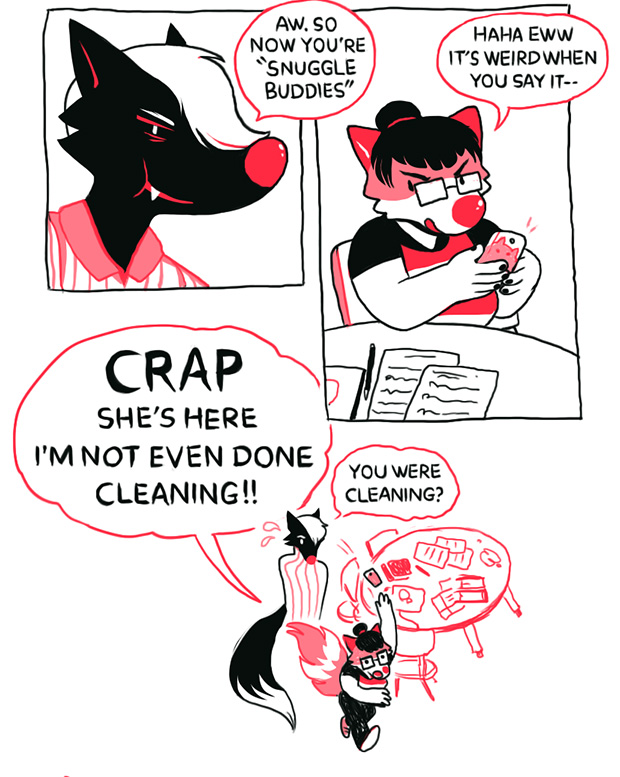 Since queer people face so much bigotry in our society, it’s tempting to push back against that by portraying queer life as a wholly positive experience. For many young queer and trans people, their friends and lovers are the only family they have. Presenting one’s queer community as a caring, loving, and selfless place can help cushion the hardships that come with being marginalized. But, as Bearhat and Frances’s comic reveals, many people in the queer community hurt one another—and that hurt takes on a life of its own.

Take Little Teeth’s fox girl story arc. During the first season, a queer wolf boy repeatedly relies on a fox girl for advice on relationships and dating. However, early on, Bearhat and Frances reveal that the fox is hardly a mature character: she ignores her girlfriend’s texts, remains inconsiderate of other people’s feelings, and inevitably chooses to break up with her partner at her first rave. For this very reason, readers remained divided on her actions during the first season’s finale.

“Her whole arc is like when someone places more importance on you than you’re necessarily willing to reciprocate,” Frances said. “But it can be really difficult to break that to someone, so it’s like, the easier thing is to just completely dash their image in their head that they have of you—like, you can’t be someone’s big sister.”

To that extent, Little Teeth is very realistic. Just as in everyday life, there’s no antagonist proper in the series. Despite the inconsiderate—and occasionally awful—things that each character does, no single person is responsible for all the conflicts that emerge within the world. Not even Swampboy.

“We didn’t really want any one character to be the one who’s the source of all problems, because that’s just not really how it works in the real world, either,” Frances explained. “We want the decisions that the characters make to make sense, even if you really don’t agree with them.”

As Little Teeth’s writer, Bearhat feels this is extremely important—not just from a storytelling perspective, but as a member of the queer and trans community, too.

“I try to make it so that you can relate to both characters, and that it kind of depends on where you’re at in your life right now and which one’s side you come down upon,” Bearhat said. 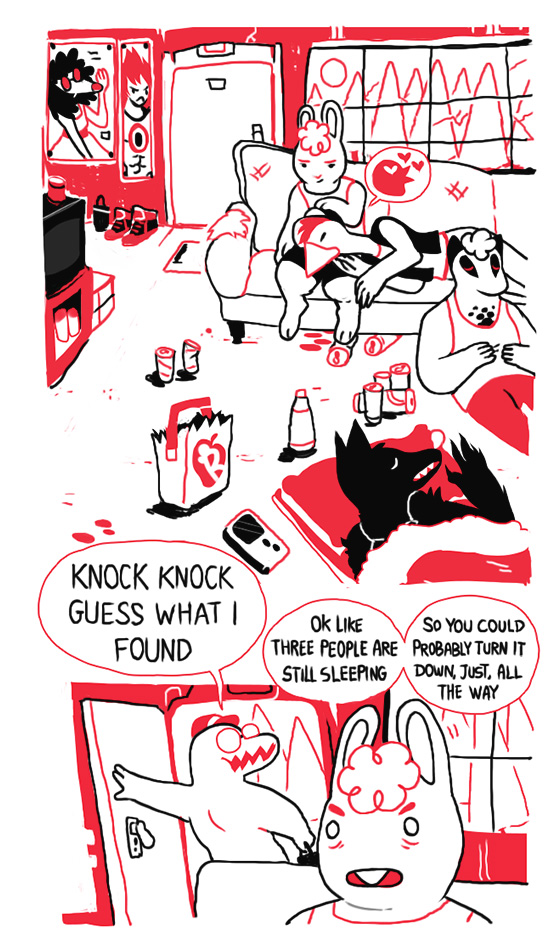 As a queer trans woman, Little Teeth appealed to me on my first read for this very reason. After all, I’ve experienced pain firsthand in the community. When I first began transitioning, I became close with many trans women who were older than me. I couldn’t have transitioned without them. They were like mothers and sisters to me, and they watched out for me as I took my first steps into a new life. But not every sisterhood lasts. Sometimes the people you trust—the people you love deeply and who are family to you—end up hurting you. Whether it’s because they didn’t know how to be mothers and sisters, or because they didn’t care enough to help you at all, it doesn’t matter. You end up suffering all the same.

But pain is a part of life, and there’s certainly no escaping it in the queer community. Frances and Bearhat not only understand that, but they want to start a conversation about that pain. Don’t run from it, they argue. Feel it. Talk about it. And, in the case of Little Teeth, create art from it.

“Little Teeth to me is part of this mantra of like—‘I want negative gay representation!’” Bearhat explained. “Which is to say, I want representation of gay and trans people that isn’t necessarily about how heroic they are, but is about just how messy they are. Just like how hard it is being a queer person interacting in a world full of mostly straight people and then other messy queer people.”

It really can be a difficult life to live as a queer and trans person. But by writing so realistically about queer communities in North America, Little Teeth is being open about the ways in which we interact with one another. It’s not just being honest, it’s being compassionate. And it’s finally giving each and every one of us the chance to talk about our problems as queer folks and heal our wounds.

So as Bearhat and Frances continue working on Little Teeth Returns, it seems nuanced queer and trans representation is here to stay. Let’s hope more stories about the conflicts and struggles of living in the queer community come to the forefront, now that their series has opened the door.