Intergenerational Resistance“This isn't any worse, it's just your turn.” 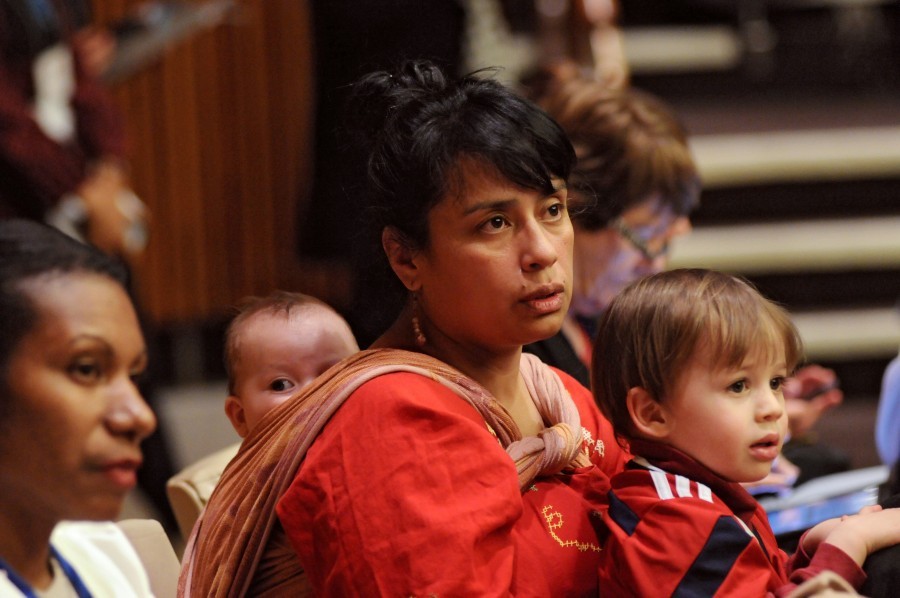 Intergenerational Dialogue hosted by UN Women during the 59th Commission on the Status of Women, 13 March 2015. Photo: UN Women/Susan Markisz

My grandmother turned 75 this weekend. I wished her a happy birthday over the phone as she sat in her kitchen in Miami, the rest of my family scream-talking in the background. As is the case with grandmothers, the conversation turned back to me very quickly. She had heard I’d been going to protests over the past few years and asked if I was still doing so. I told her yes, bracing myself for the speech I’d heard my mother deliver with increasing frequency lately about safety and precautionary measures.

Instead, I got a chuckle and an unexpected glimpse into a shared history I didn’t know existed. “You’re going to be a marcher too, then,” she said, more an acknowledgment than a question.

I have never heard my grandmother utter the word politics, but that day she told the story of the first time she marched. She was a student at the Universidad Nacional Autonoma de Nicaragua (la UNAN), the country’s first university to gain autonomy from the government which, up until that point, had total jurisdiction over professors, curriculum, and budget. The university gained this independence in 1958, 22 years into the Somoza regime that saw a dictator profiting at the expense of the rest of the country. After the clearly rigged elections in 1947, and with the nearby Cuban revolution paving the way, the political tide began to turn. La UNAN became the epicenter of dissent and the beginning of organized student protest. Less than a year in, however, a protest in 1959 drew the attention of the national guard who promptly entered the campus, opening fire on four students. My grandmother recalls how she stood next to one of them, still remembers how she fell under the weight of him. Over the phone though, she mentions this only in passing, a casual memory. You have to understand, my mother explained later, that this was only the first of many bodies. The spark was lit that day but the Somoza regime wouldn’t be overthrown until 1979, after 43 years in power.

For many, these past few days signal a first: the first time they have feared for their country, the first time they have doubted the sanctity of their government. But for others, the signs are a little more familiar. “I’m 75,” my grandmother shrugged, calm and utterly unfazed. “I’ve seen worse. The thing to remember is this: if you believe in what you have to say, then you must find a way to say it. This isn’t any worse, it’s just your turn.”

Resistance has a history and a lineage that predates the United States, and that certainly predates Donald Trump. My grandmother may not use the word feminism in her daily speech, but she understands its meaning instinctively. She may not discuss the dictatorship she fled from in the language of colonialism, but she lived it. We joke about the stories we’ve all heard before: back in my day… But back in their day our parents and grandparents were twenty-somethings too. They were protesters and feminists and dissenters, too. If we look around us and don’t know what to do, we are forgetting that we already have the blueprints: immigrants who have done this all before. Resistance is not a genetic trait or a predisposition, it is a practice, and we have so much to learn.

I join Bitch Media as Director of Community in hopes of creating a space that validates and supports us but which also challenges. How much space can our feminism hold when we make it accessible, inclusive, and intergenerational, with a memory that does not forget or erase but builds instead a collective and multifaceted history? What methods of resistance can we uncover if we stop using immigrants as talking points for “the economy” or “national security” and actually place value in their lived experiences? As we come to terms with the anti-Muslim, anti-immigrant fear mongering being officially espoused by the White House it helps me to remember that resistance existed long before the United States did, that it will continue to exist after this administration is long over, and that my resistance looks a little bit like a 5-foot tall brown woman with an accent who I think I’ll call more often.