Bikini Kill Bassist Kathi Wilcox: "We Really Didn’t Think Anyone Was going to Hear What We Were Doing" | Bitch Media

Bikini Kill Bassist Kathi Wilcox: “We Really Didn’t Think Anyone Was going to Hear What We Were Doing” 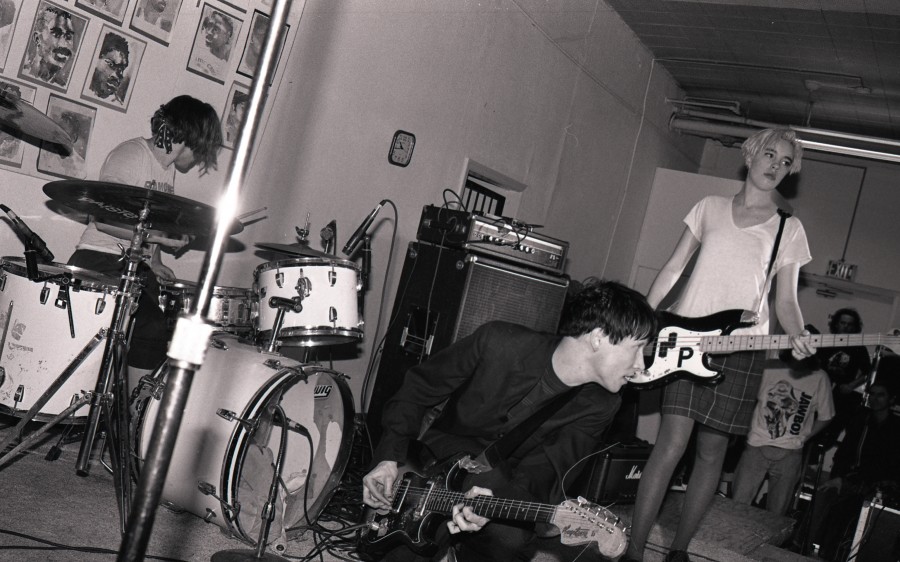 Bikini Kill playing a show in Washington, DC in 1991. Photo by Brad Sigal.

In 1991, Olympia punk band Bikini Kill recorded a demo tape. Much to their surprise, the tape is still reaching fans two decades later.

The now legendary band is reissuing their demo tape Revolution Girl Style Now this September, including three previously unreleased songs that they cut from the tape due to space. Bikini Kill members Kathi Wilcox, Kathleen Hanna, Tobi Vail, and Billy Karren formed their own record label in 2012 specifically to reissue their old records. The lo-fi dynamic of the band’s grungy sound comes through clearly on this album—it’s more fuzzy and “dirge-like” than the fast, pounding rhythms that became riot grrrl anthems for generations of listeners. I talked with bassist Kathi Wilcox, who currently performs in The Julie Ruin with Kathleen Hanna, about what it’s like to listen to the album she helped make when she was just learning how to play a chord.

I just read an interview with you and Kathleen Hanna in Rolling Stone and you talked about how when you heard these unreleased songs again after so long, you started laughing.

What was funny to me is that I had forgotten those songs. “Ocean Song,” I didn’t laugh because it’s a heavy song. But “Playground”—I just laughed at the part when we stopped playing and then suddenly Kathleen says, “Is somedbody talking? I don’t hear anything!” I was like, “Oh my God! I totally forgot about that part in that song!” It’s so funny, she sounds like a little kid! And then there’s the whole crazy drum solo breakdown, it’s so heavy, it sounds like the Melvins. I’m like, “Why did we think this was a normal song to have?” It has six different parts and it’s so long, we didn’t even finish it because the tape runs out and we’re still playing. It just brought me back to what it was like to be in that band, where we really didn’t think anyone was going to hear what we were doing. We were just doing it to entertain ourselves.

How does it feel to be releasing to the great wide world these songs that you originally cut off a demo tape? I mean, these are songs that didn’t even make the first cut.

The reason they didn’t make the first cut—I can’t say definitively that we cut them because we didn’t like them, but I think we cut them because they didn’t fit on the tape. There was a physical limit to what we could include on the tape, it was only 15 minutes per side or something. So my recollection is that we went through what would fit well on each side. Playground is like four minutes long and we were immediately like, “That’s just too long, we can’t fit it on there.” Also, it took us a while to get our sound together. When we first started playing, we were playing really slow and kind of grungy, dirgey songs. Once we switched around and I was playing bass and Kathleen was singing, everything sped up a lot. I think on some level maybe we decided that was how our band was going to sound, so we decided to not put those earlier songwriting efforts on because we knew that ultimately our sound would be much different.

That reminds me of how so much of the sound of this music was shaped by the physical limitations and cost involved. Now there’s a punk aesthetic and people spend money to make their music sound more lo-fi or DIY. But your sound was shaped by how much you could fit on one cassette tape and the equipment you had available.

Yeah, as well as shaped by our actual ability to play. I mean, Tobi had been in a band that had toured, in Go Team. Kathleen and Bill had been in bands that had toured. But I had nothing. I mean, literally, I played piano and I’d never played bass or guitar before that band started. It took a while for everyone to get up to speed to be able to play together. Bill didn’t join the band for months, so it was just the three of us muddling through. Kathleen played bass on those three unreleased songs, she wrote them on bass and she didn’t really know how to play bass either, that much. It was almost like Rock Camp for Girls, we were just figuring it out as we went along. It took a little while to figure out how to play together and what we wanted to sound like.

How does it feel making music now after so much experience and time under your belt versus then when you were just starting out?

I’m more comfortable with it now. I wouldn’t say I’m hugely better. Kim Gordon has said this in interviews, too: She doesn’t really want to get better. I feel that way, too. I feel comfortable with my ability as a bass player and I don’t really want to get better, to learn how to play flat bass or play crazy runs or something like that. I feel comfortable playing in front of people, but when we first started Bikini Kill, I had never played in front of people. Some people are born to be on a stage—Kathleen is that way, I would say—but that is totally not me. I wouldn’t say I was shy, but my drive is not to stand on stage and have people look at me. When we first started, I would stand with my back to the audience. I wouldn’t even look at the audience, I would just stare at Tobi and be like, “Okay, we’re going to get through this show.” Now I’m used to people looking at me, but it took years.

When you listen to these tracks, it’s got to take you into such a timewarp, to a time when you were 21, 22. If you could give yourself some advice at that age, what would you say? What would you tell Kathi who recorded this album?

I would probably tell my younger self that a lot of people are going to be paying attention. Not to put pressure on myself, but to take the time to value what you do. While it’s good to be off-hand about stuff, it’s good to be very considered and honor what you’re doing, to take it seriously in a way. When I was young, I didn’t take it that seriously because I honestly didn’t think anybody would hear it. I thought we’d made a demo cassette and maybe do one tour and that would be it. I never thought we were going to make an actual record or do more than one tour. I would say to myself, “Consider that this might be longer than a year. Think about how you do this because people are going to be talking about this for 25 years.” Of course, that would be a really heavy thing to dump on a 20-year-old. 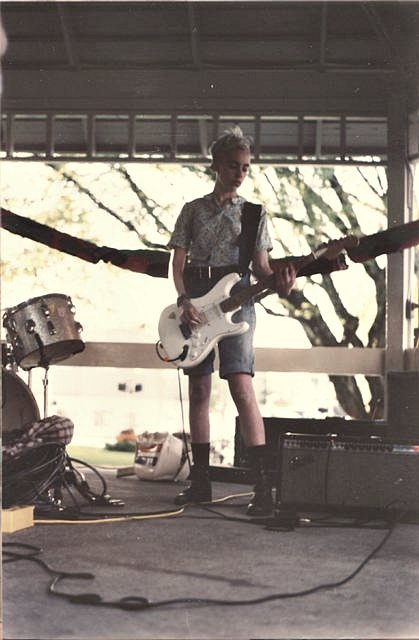 Yeah, right? We didn’t really take the recordings that seriously because we were a live band. I always considered us a live band. If you wanted to find out what we were all about, you had to come to the show. The record is a pretty thin approximation of what going to a Bikini Kill show back then was like. So we didn’t put a lot of studio craft or whatever into the record, which I don’t know if we should have, but we should have thought a little bit more about how the record would sound—in hindsight.

Reflecting on that, is making music still fun for you? Or do you feel too much pressure of, like, the whole world is watching and we have to say something important about feminism and politics!

It’s so much more fun than it was in that band. Not to take anything away from that band, but just for me personally, the experience of making music with the people in the Julie Ruin is more fun because we’re older and we know what we’re doing. We were under so much stress in that band that it was really tough. Even though the shows were really great, the recording process was not all that fun. And sometimes even the shows weren’t that fun, either. Man, what a bummer interview. But, I mean, for me personally, it’s much easier for me to make music now. I literally didn’t even know that you had to tune a bass when I started that band.

Making it up while you go along is great and all, but it’s also nice to feel like you know what you’re doing and how to do it well.

Especially if you have to play with other people! And they’re like, “What are you playing? That string is not an E or an A, what are you doing?” You have to get together and all be on the same playing field. I just know a lot more now.