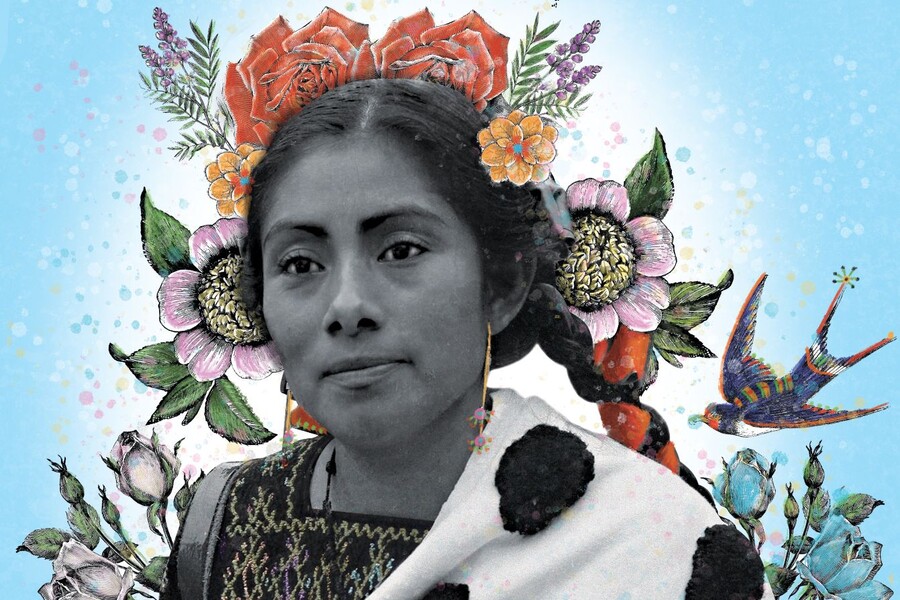 On July 8, 2021, the violence began again. Thousands of women and children from the highlands of Chiapas, Mexico, were displaced from their homes in Esperanza and Acteal. Many became lost and disoriented as they fled the Narco paramilitary groups that were advancing into the region as they attempted to take control of Pantelhó, a town in Chiapas. A week prior, Indigenous land defender Simón Pedro Pérez López had been gunned down and killed as he was walking to a local market with his son. Pérez López had been the president of Las Abejas de Acteal, an autonomous pacifist group of Tzotzil Maya. This isn’t the first time the group has been caught in the crossfire of violence coalescing around their community. In 1994, the Zapatista Army of National Liberation started an uprising against the Mexican government in an attempt to retake Indigenous land. In 1997, paramilitaries entered Acteal and killed 45 people. Guadalupe Vazquéz Luna, a.k.a. Lupita, was there; at the age of 10, she survived the massacre that took her father, mother, sisters, grandmother, and uncle. Nine members of her family were killed that day. And she was there on July 8, when the Narco paramilitaries entered Acteal once again, displacing thousands.

Las Abejas de Acteal came together in 1992, using nonviolent means to defend Indigenous life from exactly this kind of violence. Among the group’s founding principles were women’s rights and equal access to land ownership; other priorities included anti-neoliberalism and asserting their right to ancestral land and resources. When the group was founded, there were about 200 members from eight communities. “Abejas” translates into English as “bees”—pollinators that are essential to our ecosystems, armed with one sharp sting they only employ when absolutely necessary, as it spells death for the creatures themselves. The nonviolent resistance of the Abejas de Acteal stands in contrast to their neighbors, the Zapatistas—also an autonomous Indigenous group, but one that has famously used violence in their fight for land and autonomy from the Mexican government. Its namesake, Emiliano Zapata, died in 1919, but his legacy remains as recognizable as his wide-brimmed sombrero and handlebar mustache. His is the image of rebellion and the quest for freedom has had staying power now for more than a century.

But men aren’t the only ones leading the Indigenous resistance, a fact at the center of Monica Robles Wise’s latest documentary, Lupita. Released in 2020, the documentary follows the young, radiant Tsotzil Maya woman and single mother who survived the 1997 massacre and has since become a spokesperson and leader for her people. “This is a woman [who] can tell the story of 500 years of repression of Indigenous peoples,” Robles Wise tells Bitch. There’s something powerful in a name that carries the force of a movement. Like Zapata and Zapatismo, the title of the film—a single, simple name—feels like an assertion: Here is an iconic woman who is as much the face and voice of her community as any man could be. In Spanish the ‘ita’ is diminutive, an address that connotes tenderness and intimacy, an expression of cariño. And it reflects what kind of leader Lupita is: one who isn’t afraid to get close. The 20-minute film moves from scenes of Lupita speaking to an audience of hundreds at the Zapata Caracoles to those that capture her life at home, braiding her hair or asking her son about his homework. In the fight, these moments seem to say there is also care, there is also softness. In the face of violence, it is perhaps this softness that is the hardest won.

It’s no secret that in Mexico, machismo permeates daily life: Pride in powerful masculinity prompts men to open doors for women, but entitlement coupled with the idea that men are inherently superior to women is lethal, evidenced in the epidemic of femicide that has plagued the country for decades. Indigenous communities that proclaim their women are at the fore of their movements often fall short too. Robles Wise describes it as a hypocrisy between what is claimed and what is practiced: “That whole, like, ‘oh, we’re feminists, but we don’t let our women speak their minds.’” Communities call themselves feminist, but men still wield power over women. “This happens in all the Indigenous communities I work in,” Robles Wise says. “The women lead the community, they take care of the family, they’re, like, kind of on a pedestal. They’re on all their logos, but at the end of the day, they don’t have the last say.” She saw and filmed this part of the story during the three years she spent with Lupita in Acteal, but this footage didn’t make it into the final cut.

Given the film’s brief run time, Robles Wise had to leave out some of what she learned from Lupita—like how Lupita had gotten kicked out of the community at one point for speaking her mind too openly. The film only hints at it: “Despite our advances on the path of resistance,” says Lupita in a voiceover as she is riding in the back of a truck, “it has been very hard for a woman to hold this position in the organization. I was, I am, and I will continue to be exposed for saying what I think, what I believe, and what I know. I knew it would be like this from the beginning. But it’s a risk I took.” This particular line is delivered in Spanish, but Lupita also speaks in Tzotzil throughout the film—sometimes to address the crowds that come to see her speak, and sometimes at home, talking with her family.

As a Columbian American, Wise Robles knows what it’s like to be between two worlds. “I also grew up between cultures, never quite fitting in,” she says. The stories she tells through her films tend to look at feminist, LGBTQ, and Indigenous narratives. She recently directed and shot a short film for the Guardian about Mexican women who kicked out the cartels, and her current project, Niñas, is a documentary about the 15 girls who survived a fire in a state-run shelter and the abuses of power that occurred there. With the backing of an International Women Media Foundation fellowship, Wise Robles decided to go to Mexico, hoping to document Maria de Jesus Patricio Martinez, commonly called Marichuy, the first Indigenous woman to run for the country’s presidency. That project didn’t take, and when Wise Robles heard Lupita speak during a public tour of the Zapatista Caracoles, she knew she had found her story. But in Acteal, Wise Robles was clearly an outsider. She was aware of it when she began working on the film in 2017; each subsequent year, when the local governing body would change, she had  to earn the trust of those who were new to power and didn’t know her yet. She worked with a local filmmaker, Eduardo “Lalo” Gutierrez, who shot about half the film. His lifelong friendship with Lupita was the only reason she agreed to be filmed at home.

The title of the film—a single, simple name—feels like an assertion: Here is an iconic woman who is as much the face and voice of her community as any man could be.

Wise Robles often works this way, handing cameras over to those whose stories she tells. The idea, she says, was to make the film with Lupita as opposed to about her—something that wasn’t clear to Lupita and her community at the outset of the project. “It’s about women and justice and having our voices heard,” says Wise Robles. She also says it was important to tell that story to an international audience, a goal she’s achieved. The documentary was an official selection for Ambulante 2020, Sheffield Doc/Fest, and the Bermuda International Film Festival. It was featured on a Doc NYC shorts program and Women’s Voices Now Film Collection named it the Best Social Change film of 2020. In an interview with Bitch, Wise Robles says another goal for the film was to make people care more about what this Indigenous community has gone through. In a world where Indigenous history, struggles, resilience, and joy are largely erased or invisible, that’s a worthy aim. But Wise Robles also wanted Lupita to see herself in the film. She described the moment when Lupita watched the final film for the first time. After it had finished airing, Lupita got up to address the crowd and the first thing she told them was Esto no me representa a mi—“This doesn’t represent me.” “I’m like, holy shit,” remembers Wise Robles. But Lupita went on: porque es la historia de tantas otras sobrevivientes: “Because it is the story of so many other survivors.”

Wise Robles notes that, with the current advance of Narco paramilitaries into the region, it’s become a no man’s land: Two hundred people have tried to take refuge in Acteal, whose population normally numbers about 40. “I don’t see an end to this because I think they just want this territory,” she says. “It makes me so mad.” The filmmaker connects what’s happening in Acteal to the international drug consumption that increased during the pandemic, which has in turn fueled the Narcos’s attempted expansion into new territories. The film ends with a scene of Lupita speaking before a crowd of several hundred people in Oventic, her last appearance during the 2017 tour of Zapatista Caracoles as a part of Marichuy’s presidential run. “We don’t want to fall into the government’s game that tries to silence us. We want to make this visible. As big as we can make it,” she says. In this, it seems the vision of the two women, filmmaker and activist, converge. “It’s not just Acteal now,” Lupita tells the crowd, “it’s the whole world. Acteal isn’t even the home of the community who lives here, but a home for everyone. A space to meditate, to think about the reality we are living in.”

Read this Next: Leap of Faith 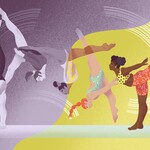 by Helen Li
A new generation of gymnasts rethinks the expectations—and rejects the abuses—that previous ones endured. 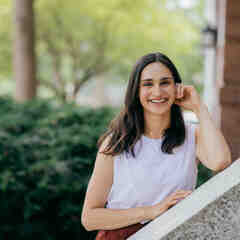