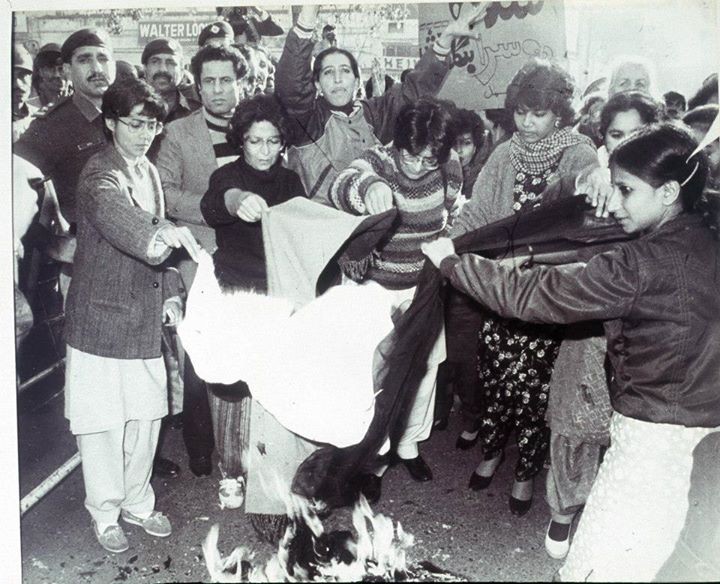 Aqdas Aftab is the 2017 Global Feminism fellow at Bitch Media

I recently re-read Sara Suleri’s memoir, Meatless Days, and much like the first time I read it, I was caught up in Suleri’s contradictory description of women in the Global South. She begins the book by declaring, “Leaving Pakistan was, of course, tantamount to giving up the company of women.” Later, while teaching Third World Literature in New Haven, Suleri is questioned by a student about why she fails to include enough women writers in her course. And despite images of her sister and mother and grandmother flashing before her, her geographical location in the West compels her to answer: “Because there are no women in the third world.”

How are there no women in the third world? Do we not exist at all, or does the white Western gaze refuse to acknowledge our existence?

Of course, women everywhere have always found ways to resist patriarchy. Yet the category of “woman” still, too often, fails to include the women whose company Suleri describes in intimate detail when she paints her life in Lahore—women who may not overtly rebel, but who nonetheless negotiate gendered expectations daily. In the current moment, “woman” is defined by a certain strain of feminism that has become mainstreamed internationally. This popular brand of feminism privileges gender over other identities such as race, class, and caste, universalizes the experiences of white women, and assumes that feminism needs to spread in only one direction— from the west to the rest. In this mainstream brand of globalized feminism, women in the Global South do not exist. Their everyday resistances in workplaces, in busy marketplaces, in kitchens, and in bedrooms, do not matter. Their political movements are not recognized because they do not—often very intentionally—uphold this Western feminism.

In the Western imagination, what matters about women in the Global South is our oppression only when it is convenient to the Western gaze. Western representations of women in the Global South take on many faces but have the same goal: rob the black or brown woman’s agency by portraying her as a victim; steal her voice so she cannot resist the white gaze; transform her into a sexual fetish so that white men can jerk off to the fantasy of colonial rescue. Stereotypes about Black and brown women’s oppression and fetishization date back to 18th and 19th century colonial art, when such images were used to justify colonial missions. More recently, media representations that contrast the feminism of the West with the patriarchy of the Global South have also been used to justify the war in Afghanistan, in addition to catalyzing the white savior complex and exploitative voluntourism. From 19th-century Orientalist paintings like The Snake Charmer to the 1985 National Geographic cover photo The Afghan Girl, Western representations of “othered” women fetishize their exploitation. These stereotypes of black and brown women who need rescuing by white saviors are also found in contemporary bestsellers like Half the Sky, and they continue to circulate through big- and small-screen offerings like Zero Dark Thirty and Homeland, in which liberated white women are contrasted with oppressed, brown (usually Muslim) women.

While such portrayals are not always untrue, they are terrifyingly incomplete. These portrayals ignore the lived realities of women in the Global South, and their acts of negotiating, fighting, and surviving. Suleri’s memoir is set during the 1980s, when Pakistan was under the military dictatorship of General Zia-ul-Haq. Zia’s despotic, decade-long rule hardened misogyny in the public arena, mostly by introducing violently unjust laws around rape, sex, and women’s legal testimony. One of the many feminist responses to this regime was political organization, with groups such as the Women’s Action Forum forming to oppose the imposition of misogynistic laws.  The Women’s Action Forum led the iconic February 1983 demonstration in Lahore, which included a burning of dupattas (a piece of cloth traditionally worn by women in South Asia over the chest) to symbolize demands for gender and sexual freedom. Even though this fierce resistance against the violent military regime was inspirational for later generations of feminists, such movements have largely been ignored by Western feminism and the Pakistani state.

While women on the streets of Lahore were being tear-gassed by police during their protests, there were also countless women carrying out daily resistances in seemingly mundane arenas. Unlike overtly political marches, their daily resistances cannot be found in historical sources because historical “evidence” cannot capture the mundane and the everyday; their memories, their bodies, and their stories serve as the archives of their resistance. However, such women remain invisibilized in the global imagination because neither their skin, nor their language, nor their everyday negotiations resemble the kind of feminism that is read as “real” feminism.

They remain invisibilized because western imperialism is wedded to the stereotype of the voiceless, passive third-world woman so that the white savior complex can continue to thrive. They remain invisibilized so that more and more people in America can feel basic emotions like pity when they read simplified, filtered accounts of women in the Global South. And they remain invisibilized because the political right in Pakistan argues that feminism is a “western import,” and hence must be kept out of the country, while elite “liberals” in urban Pakistan continue to position Western feminism as the only kind of feminism to aspire to. While these forces—the political right in Pakistan and western liberalism—seem like polar opposites, they espouse the same rhetoric: Pakistani women do not have an inherent place in feminism.

It is, of course, dangerous to romanticize all movements led by women in the Global South. Like Suleri, I too grew up in the company of women. I witnessed fiercely feminist teachers and aunties, and I saw women-led conservative groups sustain patriarchy. I heard powerful, elite women promote ethnic and sectarian violence. But these groups of women also need to be seen so that the differences within cultures can be acknowledged, so that colonial feminism can stop homogenizing all women in a politicized region into one lump. Unless we understand how different women in the Global South actively dismantle and uphold patriarchy, popular Western feminism will continue to rely on imperialism rather than alliances.

While Suleri focuses exclusively on cisgender women in her memoir, it is also important to trouble her cisnormative category of “woman.” Even Suleri’s feminism—which differs starkly from colonial or corporate feminism—cannot include the experiences of all the folks in the Global South who are marginalized by patriarchy. When I read books like Meatless Days, I yearn for a feminism expansive enough to recognize the lived experiences of the Khwaja Sira people (a trans community in South Asia) and how they challenge the limitations of Western queer and trans movements. I want a feminism that can make celebratory space for my mother’s interventions in living-room discussions, patiently countering sexist remarks made by uncles. I want a feminism that resists racism, militarization, casteism, capitalism, and imperialism just as much as it fights patriarchy.

My blog series in the upcoming weeks will reflect on how global feminism needs to continue complicating itself. I will be writing about the white heteropatriarchal gaze, colonial feminism, and the invisibility of many intersectional movements in the Global South. More critique, more celebration, and more feminist anger to come.