In Favor of Straight White Viewers, “Queer Eye” Lives in the Middle Ground 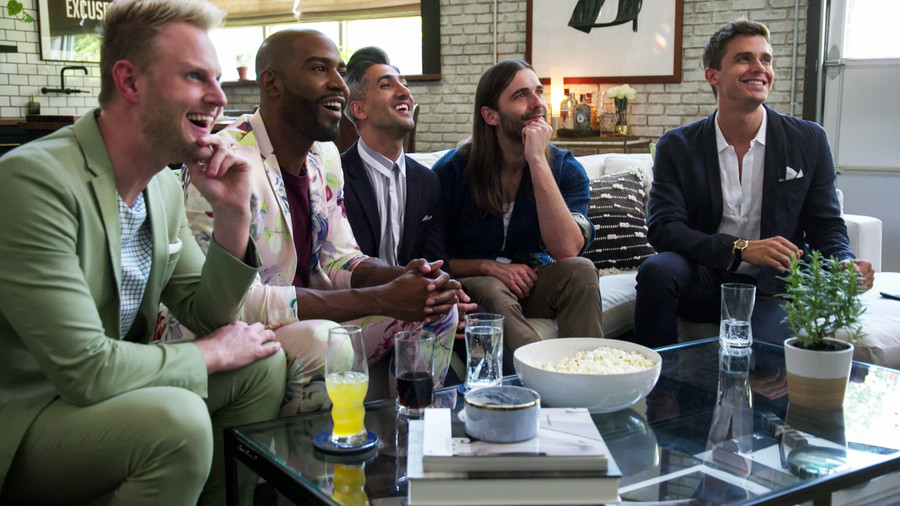 When I watched the first season of Netflix’s Queer Eye reboot with my primarily queer women friends, I expected to feel as excited as the straight women I’d previously talked to about the show. They couldn’t stop gushing about the beauty of it all. They talked about crying, feeling so moved, and being thrilled about gay people being so accepted onscreen, but as my friends and I watched, we started to feel like we were missing a key piece of the puzzle. I was deeply aware that Queer Eye divorces its understanding of queerness from any real politics, but it was still painful to watch the Fab Five lovingly embrace a Trump supporter and a cop before turning their attention to a queer woman. Why didn’t Queer Eye feature a queer or trans woman of color “hero,” a title bestowed on all of the show’s guests, before showing love to someone who voted for Trump and forcing Karamo Brown, the only Black host, to find a “middle ground” on police brutality?

“I wanted to stop after the first episode, but [I] watched all of Season 1 out of FOMO. [I] never [watched again],” says Reneice, a queer person of color and writer. “Jonathan [Van Ness’s] constant appropriation of AAVE makes me livid. The episode where they send Karamo to find middle ground with that Trump supporter is harmful, and the scene where they get fake pulled over is just plain traumatic.” It’s not unheard of for queer-centered media to appeal to gay men but not to lesbians or queer women. Stereotypes abound, media has catered to these groups in such different ways, refusing to advertise to queer women due to the idea that queer women don’t or can’t shop, and when we see a gay bar, we can assume that nine times out of 10, it’s a bar for gay men.

In general, I’ve accepted that Queer Eye wasn’t created with me or other queer women of color in mind. But the show still matters because it has such a significant impact on pop culture: the straight women in my life buzz over which members of the Fab Five they love the most (and seem generally offended when I say I just don’t love the show the way they do), and it’s hard to deny the impact the show has had on how straight viewers understand the LGBTQ community (which is its goal). But what does it mean if a show that seeks to shape how queer people are viewed and understood at doesn’t hit the same mark for queer women?

“I really do love it, and continue to watch each season, but it can feel a little limiting,” says Kirbey, a college student and queer woman. “Is this what straight people are going to think our whole community is like? The Fab Five doesn’t have any women-identifying people. I am really glad that it gets more and more people okay with that feeling of discomfort that comes with social change, [like] when [a hero] is really pushing against their advice because their masculinity is so engrained. It’s going to be uncomfortable before we see direct change.”

“I think a lot of people want to use this show as a passive, accessible ‘remedy’ for the Trump administration,” Victoria, a healthcare administrator and queer POC tells Bitch. “This show definitely upholds so many neoliberal standards of what equality should look like. We have the Fab Five visit a white woman wearing a Blue Lives Matter shirt, a man who owned a MAGA cap, and finally there is an episode with a Latina woman in Season 4. As a Latinx, I was super intrigued to watch this episode [but] it all stinks of respectability politics.”

In some ways, it’s not surprising that Queer Eye has a different relationship with queer women than it does with men, gay or straight. Queer Eye is a reboot of Bravo’s 2003 hit Queer Eye for the Straight Guy, a show in which gay men use their finesse to fix up—or “make better,” to use the show’s vocabulary—straight men.  Ted Allen (Antoni Porowski’s counterpart), Carson Kressley (counterpart to Tan France), Jai Rodriguez (Karamo Brown), Thom Filicia (Bobby Berk) and Kyan Douglas (Jonathan Van Ness) were the original Fab Five, and the world was much different when Queer Eye for the Straight Guy debuted. The New York Times deemed 2003 a “new phase for gay books.” Media was newly devoting time and space to the gay-marriage conversation—something now seen as a misstep by many queer people, and, in 2004, George W. Bush said of gay marriage, “Our nation must defend the sanctity of marriage.” 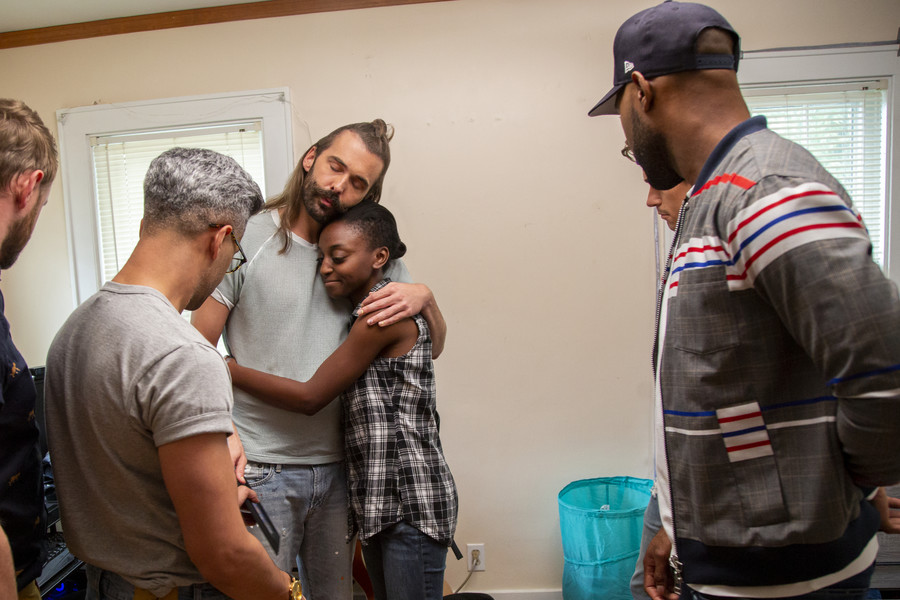 Lawrence v. Texas had just ended sodomy laws, and the first gay network, LOGO, launched; Queer Eye followed Queer As Folk (2000 to 2005), with The L Word debuting in 2004, just a year after Queer Eye. Queer narratives were carving their way into the mainstream in the midst of a great deal of political and personal turmoil over what the United States was supposed to do with gay people, and this surely impacted the media that of that time. To many, especially those with the sort of privilege that gives them access to things like publishing and television, assimilation seemed to be key to gaining rights. Even as late as 2012, Simon Doonan’s Gay Men Don’t Get Fat was heralded by mainstream publications and actors despite its aggressive reliance on stereotypes and fat-shaming to drive sales and.

In the early 2000s, makeover shows leaned more toward cruelty than helping people take better care of themselves. On TLC’s What Not To Wear, a person’s family members, friends, and coworkers essentially stalked them, judging their fashion and begging Stacy London and Clinton Kelly to help their loved one update their wardrobe. How Do I Look employed a similar approach. But Extreme Makeover “fixed” people in a more aggressive way, using plastic surgery as the launching point to overhaul their entire lives. But even the rebooted Queer Eye has been critiqued for its makeover angle because, well, it’s a makeover show, and our appearances and our fashion choices are embedded in our identities.

In Season 4, Latina participant Deanna Munoz shares that she’s been doing her own hair and makeup the same since childhood, but she wants to be seen as a businesswoman and treated with more respect. “It felt like stylistically, they tried to take away some of her cultural markers for the sake of professionalism, which equals white to be honest,” says Victoria about this episode. “Her perspective is important, but [on the show] the spotlight on Americanized or half-white Latinxs always takes precedent over brown people who are fully immersed in their own culture while living in America, which is far more difficult to navigate.”

Though the original Queer Eye was “nothing short of groundbreaking,” according to journalist Jude Dry’s March 2018 piece for IndieWire, is it still a necessary show in 2019? It took until Season 3’s “Black Girl Magic” episode for us to see a Black lesbian featured, leading some to ask, what would Queer Eye look like if queer women were a part of the Fab Five? In a time where gay men largely dominate queer spaces, digital and in real life, it’s hard not to wonder where queer women are supposed to find ourselves as the focal point of really anything mainstream other than porn, where we get a healthy dose of fetishism.

Bing, a blogger, educator, and gender nonconforming lesbian, points out that an all-woman Queer Eye wouldn’t succeed—and historically, it hasn’t. The more woman-oriented 2005 Queer Eye for the Straight Girl lasted one season, and it only included one lesbian alongside three gay men. “The sheer fact that a female equivalent would not prosper is an underlying factor [in my complicated feelings for Queer Eye] for sure. After all, BFF portrayals of gay men have shown to be easily consumed by large audiences, like in the case of Will & Grace. At the same time, however, queer women and lesbian media struggles with being labeled as ‘scandalous’ or ‘erotic’ and is relegated to subscription-only channels. I can’t help but see the series as [showcasing] the capacity of gay males (and one nonbinary person) [to share] their inherent superior knowledge/skills.”

It’s notable that, at times, the hosts seem more radical than the shows want them to be. Following the infamous police brutality episode in which the Fab Five is pulled over as a “joke” and Brown, the only Black host, is forced out of the car, France almost quit, and Van Ness coming out as nonbinary and genderqueer suggests that there is room for a more expanded understanding of queerness within the structure of the show. It’s worth considering what a Queer Eye that completely removed straight audiences from its focus and instead spoke to its own community would look like, and provide, and what we lose when we seek to be palatable. “I feel like it’s mostly catering to straight, cis people,” Rebecca, a disabled queer writer, tells Bitch. “Queer and disabled communities intersect, and the recent episode about a disabled man hurt a lot of disabled fans, LGBTQ or otherwise. I was considering watching the show this season because I enjoy Van Ness’s work and Twitter, but after that, I can’t.”

Bria, a photographer and BIPOC, has similarly mixed feelings. “I used to love the show, but mostly because it was a show that me, my mom, and sister could all sit down and watch together. But even then, I felt [that] the show was trying a bit too hard to be ‘woke’ and it came off as fake and pandering. I had a lot of hope for the show, but I was kind of disappointed with how they treated heavy topics. Sometimes I would finish the show with an annoyed sigh, and other times I’d cry because some episodes seemed genuine, like they actually made a change in the person’s life.”

What would Queer Eye look like if it prioritized the members of our community who so deeply need that care rather than seeking to prove, as it attempted in 2003, that gay people are normal, nonthreatening people? “It’s a feel good, ha-ha time for many people, free from the very real divides and differences within the larger queer community, and our society as a whole,” Bing explains. “It’s beginner’s exposure to queer people as genuinely good human beings, feel-good entertainment for the fans, and an opportunity to do so much more.”

Queer Eye has done tangible good, raising money for a queer Black woman who was abandoned due to her queerness and continuing conversations about mental health and self-care, even if that comes through cooking expensive foods and buying expensive couches. But the show still largely feels like a quick salve for a deep, deep wound that’s only getting deeper as Trump actively seeks to legalize the firing of LGBTQ employees, especially trans workers; LGBTQ Republican groups garner support for a second Trump presidency; and our culture continues to, at its very best, only accept very strict definitions and portrayals of queerness.

Read this Next: Reality Check 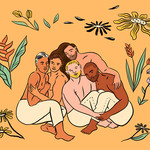 by Li Sian Goh
Narratives outside of those constructed and aired by Netflix suggest much more meaningful interactions took place during filming.