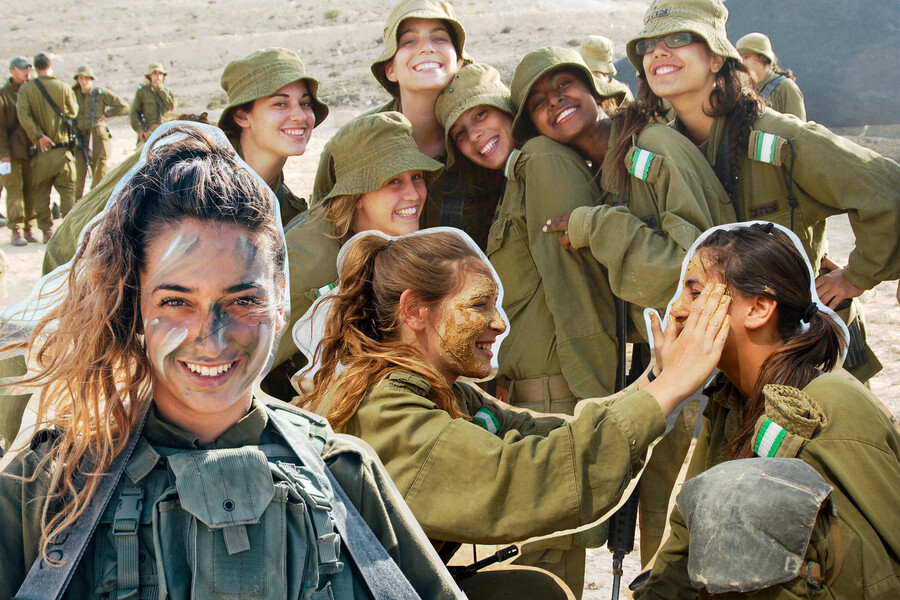 “People always ask me what it’s like being a male combat soldier,” a man in uniform says, rolling up his sleeves. Picking up a rifle, he adds, “I tell them, it’s just like being any other combat soldier.” Later, a man doing a pull-up appears onscreen and says in a saccharine tone, “I’m just as strong as the girls.” Cut to inspirational music washing over images of people shooting military-style firearms and doing push-ups. The Israel Defense Forces (IDF) released its “Not Just ‘Female’ Soldiers” video on International Women’s Day, a mere few months before the military’s most recent extended attack on Palestine. The less-than-two-minute self-congratulatory clip is typical of IDF propaganda and its embrace of gender equality as critical to the country’s larger mission.

Over the past 20 years, Israel has changed its policies and lifted restrictions on women serving in combat roles. While only a very small percentage of women are currently on the frontline, imagery of women has become increasingly prominent in the marketing of a military in which service is a mandatory requirement for all genders. Over that same time period, there has been a proliferation of “strong, independent woman” rhetoric that nearly every corporate institution has appropriated. While the IDF may not be pushing a product per se, they’re using that same rhetoric to sell a vision of militarized egalitarianism. It’s par for the course: As feminism has become more mainstream, so too have manipulative institutional portrayals of women.

The IDF, however, doesn’t really need big-budget PR for recruitment purposes. Therefore, their gendered advertising is seemingly created solely to sanitize the violence they inflict on Palestinians. TikTok star and pro-Israeli militant Natalia Fadeev, who has received a fair amount of attention lately as the IDF works to combat a newly fervent pro-Palestine movement, is one such example of this propaganda. In one of her latest TikToks, she shows off her bottom, clad in an IDF military uniform. Other videos include her shooting rifles (“her toys”), flaunting her “thick thighs,” and generally praising the Israeli military to the tune of pop songs. “Do I look like I could harm innocent civilians?” she asks in one popular clip that exploits the notion that women are less violent than men. The key words here are “look like”: Could *I*, a hot young woman, cause violence? *wink!* While the institution doesn’t create or publicly endorse TikToks like these—though, a similar “stunning looking” TikToker, Yael Deri, was featured on the IDF’s official TikTok—their promotion of seductive nationalism surely doesn’t hurt. Fadeev is one of many IDF online stars, and her large following is just the tip of the iceberg when it comes to Israel’s penchant for putting a feminine face (whether “sexy” or “strong”—or in Fadeev’s case, sexy and strong) on its violent operation.

In 2007, IDF soldiers including actor Gal Gadot posed for Maxim, a magazine “catering to the modern man.” The subheading of the article posed this pertinent question: “They’re drop-dead gorgeous and can take apart an Uzi in seconds. Are the women of the Israeli Defense Forces the world’s sexiest soldiers?” At first glance, this glamorization of war may seem like a fault of the early-2000s American media ecosystem, but it was also a calculated move on the part of Israel’s Foreign and Tourism ministries. The Jewish Post reported that the strategy of the photo spread “was in fact, a government sponsored push to evoke a sexier depiction of Israel to American males in New York.” David Saranga, Consul for Media and Public Affairs at the Israeli Consulate General in New York, told the paper at the time, “Israel is viewed as a very macho society. We want to show that we are a normal society like others.” National propaganda for global consumption doesn’t really work if it only comes straight from the source, so it helps that the Western press has historically helped to paint an aesthetically pleasing and palatable picture of Israel with women as the centerpiece.

In 2018, far-right media personality Katie Hopkins asked numerous women in the IDF why they were so beautiful. “How are you all so pretty?” she gushed. (“Must be the lack of political correctness, feminism, and entitlement mentality,” one YouTube commenter guessed). This kind of coverage isn’t confined to conservative spheres. In 2017, beloved late-night host Conan O’Brien “trained” with women in the IDF to “see if [he] was fit for the Israeli army.” The audience laughed as he comically struggled to keep up. In 2013, Business Insider published a piece entitled “Beautiful and Deadly: Meet the Women Warfighters of Israel,” and in 2016, VICE printed a photo series of “The Defiant Femininity of Israel’s Female Soldiers” in soft, dreamy lighting. It’s not a secret that U.S. coverage of the region is skewed toward pro-Israel sentiments—which is no doubt connected to the billions of dollars that are funneled to Israel from the U.S. government. But this kind of reverent coverage of the implied gender equality of their military serves to obscure what their military is actually doing.

The trope of “hypermasculine” militarism employing “femininity” to both recruit for and normalize warfare is certainly not a new idea nor is it unique to Israel: It was prominent in the First and Second World Wars, in marketing the U.S. Navy, in the British Army, and so on. A new animated U.S. Army recruitment campaign follows the story of corporal Emma Malonelord, who was “raised by two inspiring mothers.” She goes on to operate the nation’s missile defense systems and “maybe shatter some stereotypes along the way.” Using empowerment rhetoric such as “smashing the glass ceiling” of combat marks a strategic about-face from the “heroine of the home front” marketing of the early 20th century, but it’s ultimately just a rebranding that serves the same purpose. The question of women’s full integration into a sphere in need of internal reform has been interogated on many different levels of critical feminist analysis. In the IDF, and militaries across the world, women face a culture that breeds rampant sexism and sexual harassment, and plenty of soldiers want to reclaim this space to have an equal opportunity to “defend their country.” But the question here isn’t whether women should be in combat, but whether womanhood should be employed to improve a military’s image.

Similarly, some may argue that it’s wrong to criticize individual female soldiers for posing in bikinis or suggestively dancing in TikTok videos. Is it not an aim of feminism for people to reclaim their bodily autonomy and sexuality? As our society’s acceptance of women taking control of their bodies grows, this does not mean criticism is off-limits—especially when that ethos is used to promote and market the international military-industrial complex. Having more women involved in a violent military operation doesn’t stop it from being a violent military operation. And this holds true for basically any context. Imagine: If Palantir were to suddenly hire a woman to be their CEO, the company might get some good press, but they would still build software to help ICE deport migrants. Women politicians still commit crimes against humanity, women police still brutalize protestors, and women billionaires probably still won’t pay their taxes.

The question here isn’t whether women should be in combat, but whether womanhood should be employed to improve a military’s image.

After all, as bell hooks reminds us in Feminism and Militarism: A Comment, “imperialism and not patriarchy is the core foundation of militarism.” Questions surrounding representations of marginalized genders or sexual orientations in the military distract from the larger issue at hand: the countless harms of the pervasive nationalistic militarism in Israel, in the United States, and around the world. The case of the IDF—whether through the institution itself or individuals embodying its vision—is, however, one of the most glaringly obvious examples that a “pro-women” attitude can be nothing but an advertising ploy. The IDF’s various forms of purplewashing are exceptionally appalling because they’re used to erase their vicious occupation and continued displacement and systematic oppression of Palestinians. There’s no such thing as a gender-equal glorification of state-sanctioned violence, and giving militarized violence a pretty and capable face doesn’t make it any better—it just makes it easier, for some, to stomach. Of course, there are TikToks that competently bring all of this to light in less than 45 seconds. As @philipsonicare said in a video back in May of the IDF’s making themselves “more palatable to men in America”: “Yeah, don’t fall for it. They’ve been doing this for decades. Down with settler colonialism and free Palestine.”

Read this Next: #FreeBritney 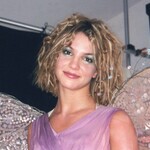 by Samantha Chavarria
The history of forced sterilization of disabled communities has been hidden for too long, but stories like Britney Spears’ allow us the opportunity to educate and liberate. 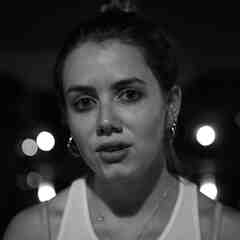