Issa Rae Points Out A Problem With the TV Industry: It's Very White | Bitch Media 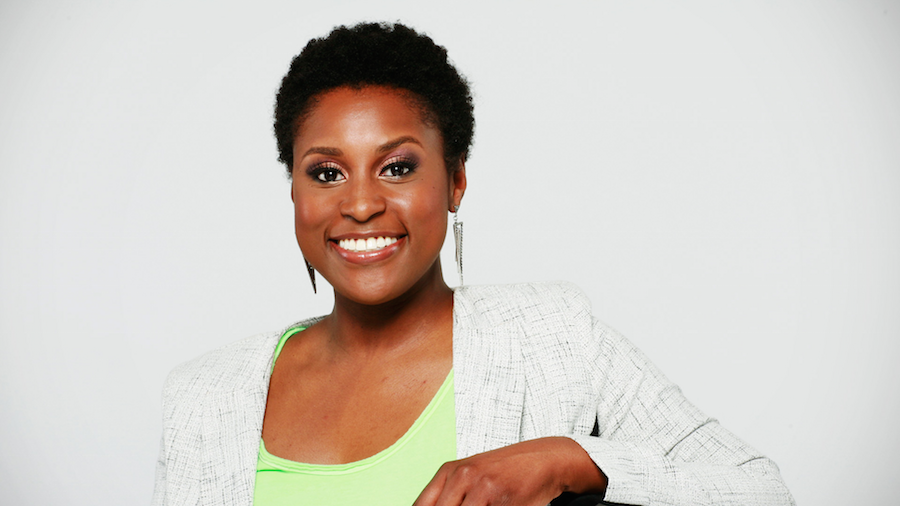 Issa Rae, the thirty-year-old writer, director, and star of hit webseries The Misadventures of Awkward Black Girl, has found that while she has millions of fans, TV executives are still wary of giving her creative control. In a new profile by New York Times writer Jenna Wortham, Rae doesn’t hold back about the rough, often unforgiving transition from YouTube sensation to Hollywood screenwriter and director.

Rae created The Misadventures of Awkward Black Girl in 2011 and the show quickly became a sensation. The series’ 24 episodes have been viewed more than 25 million times. Two years ago, HBO hired Rae to write a pilot for a show starring her that would be called Insecure. But since then, the show hasn’t become a reality. Unfortunately, Rae found that her creative vision was being purposefully dismissed. She explains to the NYT, “They wanted to make it as broad as possible, broadly niche, but I was like: ‘No, that’s not what this is about.’”

The Misadventures of Awkward Black Girl resonates with viewers precisely because it’s coming from a personal, authentic perspective that we don’t see enough of in pop culture. Despite Insecure having backing from comedian Larry Wilmore, HBO wasn’t too keen on Rae’s vision for the show. After the pilot script was approved in December 2014, Rae came up with a list of writers who were mostly young women of color. HBO rejected her list. According to a spokeswoman quoted in the profile, “The network wants people who have experience.” Does “experience” mean hiring a group of white writers?

Awkward Black Girl stars Rae as J, a smart yet socially awkward black woman stuck in a dead-end job with an eccentric cast of coworkers and a clueless, tone-deaf boss. Fans latched onto the show because Rae explored an otherwise ignored part of black life. J is “awkward and Black,” but that’s not the whole of her identity. Racial identity and navigating life as a non-stereotypical Black woman certainly provide the foundation for the show. But it’s similar to shows like ABC’s Black-ish and Fresh Off The Boat, where the characters are not hollow props utilized to teach racial tolerance or glorify exoticism. In other words, J is not pigeonholed by her Blackness. She’s relatable due to the same exploration of universal, everyday topics such as dating and office drama—the same fodder of prime-time shows, just centering on a Black woman instead of an all-white cast. J’s humor and wit soften the rather jarring instances of macro and microaggressions. In her recent bestselling memoir The Misadventures of Awkward Black Girl, Rae confesses to feeling uncomfortable while watching the movie Precious. The discomfort wasn’t due to disliking the film, but because the title character, an educationally-stunted and abused teeanger, seemed to feed into Hollywood’s record of poor and/or non-existent portrayals of Black women. She wonders, “Is that what it takes to create a sympathetic black female character?”

In a piece for Flavorwire, writer Pilot Viruet points out that audiences are hungry for shows with diverse casts. But the TV industry producers and executives who act as gatekeepers are woefully disconnected from the realities of their markets. She says:

“Some critics, culture writers, and network executives seem baffled by these new, diverse shows’—and particularly ratings juggernaut Empire’s—success: Who knew that they would perform so well? Who knew that white viewers would occasionally watch and enjoy programs with diverse casts? Who knew that minority audiences seek out minority narratives?”

The Old Guard can’t seem to fathom that diversity is good for ratings, despite the empirical evidence. They seem to be warming up to the idea with reluctance, as though casting people of color in lead roles is a passing fad. Earlier this year, Shadow and Act broke down casting in TV pilots and new series by race. For the 2015/2016 season, TV networks commissioned 73 pilots and series with Black actors in starring, lead, and/or supporting roles. ABC was at the head of the pack with 14 projects that feature Black actors in starring/lead/supporting roles, while NBC had 13. Although the optimist would claim that this is positive proof of the industry’s progressive changes, it’s worth noting that pilots are a starting point—the networks only choose a few pilots to air and then winnow those down to the shows who get a full first season. For Rae, the numbers are a double-edged sword. In her NYT profile, Rae’s response to the report is one of skepticism. The numbers don’t mean permanent change, but rather indicative of the industry wanting to jump on the next hot cultural zeitgeist. She says, “‘It still feels like we need to be in charge to prioritize storylines. Behind the scenes, it can be very white.”

With HBO pushing back against Rae to hire only writers with “experience,” it’s worth noting how different her experience is than a white writer, director, and actress making a show about 20-something identity. Lena Dunham may have had Judd Apatow fighting in her corner, but she wasn’t an established director before the launch of Girls. If Dunham’s slim resume was considered credible enough to warrant her own HBO show, why is Rae, who had the support of Wilmore, a veteran in television writing and noted for having a hand in prominent shows such as In Living Color, The Fresh Prince of Bel-Air, The Bernie Mac Show, and Sister, Sister, not given the same benefit of the doubt? Girls has never been a show that can pull in huge numbers. Earlier this year, Deadline reported that the show had hit an all-time low in ratings. One can’t help but think of the advice given by many black parents to their young children and echoed in Scandal by Rowan Pope: You have to be twice as good as them to get half of what they have. In an interview with Ebony, the creator of Black-ish, Kenya Barris, addressed the uneven playing field for Black television writers, noting that:

“The hard part about it now is that there are not a lot of Black shows. So it’s harder for Black writers to get into those circles, because they don’t have the friendship bonds and the friendship circles, and people aren’t necessarily comfortable. They don’t know us, so they’re not comfortable hiring us and being in a room full with people 14, 15 hours a day that they don’t know. A lot of times, they haven’t necessarily had Black friends. So it’s harder and harder for Black writers to get into the business.”

All this points to how characters seen on film and television are too often direct reflections of the people in charge of TV networks, not the audiences. In the final part of the Times profile, Rae goes out to lunch with Prentice Penny, a black showrunner who has worked on Scrubs, Brooklyn Nine-Nine, and the short-lived Happy Endings. He champions Rae and says to her, “I want you to win. If you win, another Issa wins. And another, and another.” We need talented creatives like Issa Rae, who will continue to break glass ceilings and prove that diversity is more than a fickle trend.