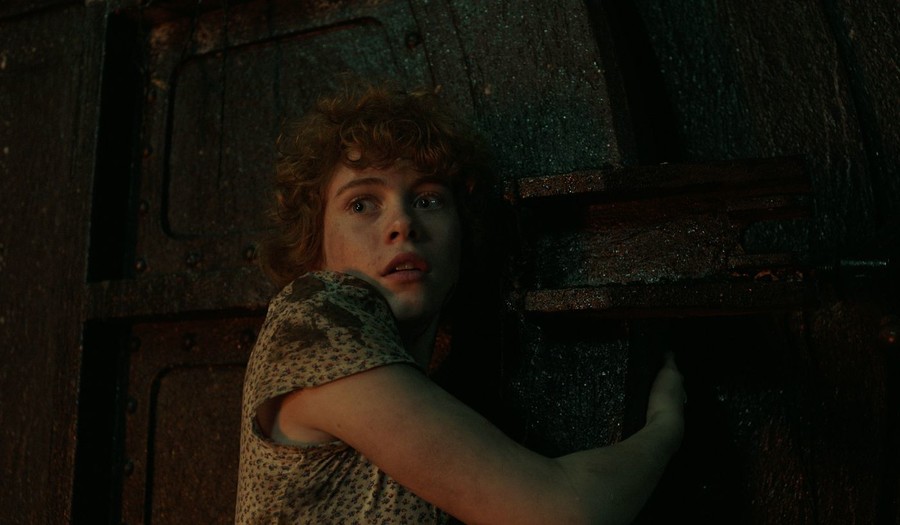 Sophia Lillis as Beverly in It Chapter One (Photo credit: Warner Bros.)

When I was growing up, there was nothing more horrifying than the thought of having visible period stains. It was bad enough that I was bleeding on a monthly basis; I certainly didn’t need my classmates to know about it. Children can be cruel, and gossip about our ever-changing bodies traveled across classrooms. Once, one of my classmates left a small puddle of blood on her chair when she stood up; the entire school knew about her mishap by lunch. The shame surrounding menstruation is so ingrained that, even as an adult, I sometimes fear others knowing that I have my period. When I started to menstruate at the age of 10, my mother and I never discussed this new development. Instead, she handed me a kit she’d ordered from Kotex or Always that included a little booklet that explained what was happening to my body.

At school, we had a “family living” class wherein students were separated by gender and put in different classrooms to talk about puberty. These experiences taught me that periods were private matters that shouldn’t be discussed, especially in mixed company. Pop culture has long both mirrored and perpetuated this stigma by rarely showing characters who openly discuss menstruation. Half the population—including cis women, nonbinary individuals, and trans men—bleed on a semi-regular basis, but you’d never know that from TV shows and movies. In 2017, Bodyform, a U.K.–based hygiene company, conducted a global survey about periods in pop culture.

Thirty-seven percent of participants said they have never seen periods mentioned on television, in movies, or in the pages of books. Pop culture’s failure to normalize periods also reinforces the shame felt by tweens and teens. Fifty-six percent of Bodyform’s respondents said they would rather be bullied than talk to their parents about their periods. When pop culture does broach menstruation, it’s often with euphemisms like “Aunt Flo,” “Shark Week,” or “TOM” (time of the month), which only further the idea that we can’t and shouldn’t talk openly about periods. But there’s one genre that has never shied away from depicting menstruation: horror.

Horror audiences traditionally skew male, and for cis men, menstruation still remains a foreign concept. Not understanding something feeds that fear, creating ripe content for horror narratives. Horror’s tradition of using menstruation as a source of scares carries on in IT: Chapter Two, the latest adaptation of Stephen King’s 1986 novel. Now an adult, Beverly Marsh (Jessica Chastain), returns to Derry, Maine, to confront Pennywise (Bill Skarsgård), the sadistic clown who has haunted her group of childhood friends, affectionately known as the Losers Club, for decades. Pennywise brings the fears of the Losers Club to life: Hypochondriac Eddie (Jack Dylan Grazer) is terrified of illness and disease, so Pennywise presents as a leper. Bill (Jaeden Martell) feels guilty about the death of his younger brother George, so he’s plagued by the constant presence of the little boy in the yellow raincoat.

Beverly’s fear is far more personal: She’s afraid of transitioning from childhood to adulthood, a shift marked by the arrival of her period. In one scene, we see young Beverly (Sophia Lillis) standing in the drugstore as an overwhelming number of tampon and pad options rise before her. She doesn’t have a mother, so there’s no female figure to help her navigate this new body, which men, including the store’s leering pharmacist, are starting to notice. Worse still, she has no safe haven: Her friends can retreat to the safety of their homes when terrorized by Pennywise, but more horror lurks in Beverly’s home. Her father views her changing body as an invitation; she’s no longer daddy’s little girl but a woman he can terrorize sexually.

In the book, Pennywise adopts the form of Beverly’s father, but in the movie, his sexual desire for her is far more insidious because he’s not possessed. IT Chapter One had a lot less blood than the average horror movie, except for the scene in which Beverly hears whispering voices from the bathroom sink, intensifying into cries for help from far below, in the sewers of Derry. As Beverly leans over the sink to hear them, blood begins gushing from the bowels of the bathroom. In the original novel as well as the 1990 miniseries, the blood merely stains the sink and vanity mirror. Under the direction of Andy Muschetti, IT Chapter One features a volcanic eruption of blood that coats the entire bathroom, including Beverly herself. It’s not just a steady stream; it’s a deluge. No adult can see that Beverly is covered head to toe in blood—only the other members of the Losers Club can.

Seeing Beverly crouched in the corner of a bathroom covered in blood is reminiscent of another classic King novel: Carrie, which opens with the naked 16-year-old Carrie White starting her period in the gym showers, eventually crouching tearfully in a tiled as her classmates hurl tampons and pads at her, yelling “Plug it up!” over and over again. The 1974 novel was King’s debut, and when the film adaptation premiered in the fall of 1976, it marked the first time menstruation was openly depicted onscreen—and not just shown, but made terrifyingly iconic. Carrie’s (Sissy Spacek) confusion (she has no idea what menstruation is) and the humiliation she experiences as the hands of her tampon-throwing peers combine to unleash the full force of her telekinesis. Her period becomes the catalyst for Carrie going from an awkward teenage girl to a terrifying, vengeful aberration.

Like Carrie, the 2000 cult Canadian horror film Ginger Snaps also uses menstruation as a horror catalyst, this time in a werewolf tale about a pair of teenage sisters, Brigitte (Emily Perkins) and Ginger (Katharine Isabelle). Ginger’s aggressive physical transformation begins when she’s bitten by a pack of creatures who pick up the scent of her first period. Soon, she’s terrorizing her community as her panicked sister tries desperately to find a cure. Ginger Snaps doubles down on the idea that menstruation can turn a teen girl into a dangerous other who needs to be harnessed or domesticated for her own good and that of those around her. If you’re unable to tame the wild beast, you need to kill it for the safety of others. While Ginger is infected through a traditional werewolf bite, she can pass her “infection” on to her partners through sex. Again, the underlying message is that girls who have reached puberty are dangerous creatures and boys should beware of their monstrosity.

Carrie, IT, Ginger Snaps, and other horror films use menstruation as a symbolic stand-in for the overall horrors of puberty for all children, but especially those who will become women.

Carrie, IT, Ginger Snaps, and other horror films use menstruation as a symbolic stand-in for the overall horrors of puberty for all children, but especially those who will become women. Our patriarchal society looks at girls through their relationship to the men in their lives, including our fathers and husbands, so girls are punished for tempting boys and men. The idea of a girl growing up and becoming her own person is terrifying to many of the men who dominate our culture. Puberty, then, is an intrinsically rich topic for a horror film. IT offers an interesting juxtaposition to other horror films that include storylines about periods: Beverly and her male friends are the only ones able to see the blood that coats her bathroom. Rather than shy away from it, the boys all jump in and help her clean, no questions asked. They don’t shame her, make her feel embarrassed, or leave her to handle the stains on her alone. They’re in this horror together, and they need each other to survive Pennywise and puberty.

IT Chapter Two brings the story full circle when Beverly and the rest of the Losers return to Derry to confront Pennywise for the last time. In the 27 years that have passed since they’ve been together, Beverly has left her abusive father and married Tom (Will Beinbrink), another abuser.  When Mike (Isaiah Mustafa) calls Beverly, requesting she return to Derry, her husband hits her, believing she is having an affair with Mike. Throwing her on the bed, he uses his belt as a weapon and begins striking her. Tom demands Beverly do with him what she plans to do with Mike, her body merely a tool to assuage his own jealousy. She narrowly escapes as he begins to climb on top of the bed, and on top of her, presumably to rape her.

Once in Derry, the Losers are confronted by their childhood fears as Pennywise’s reign of terror continues. In one climactic scene, adult Beverly is trapped in a bathroom stall, blood gushing in with no means of escape. As she struggles against the tide of blood, her father and the creepy pharmacist from her youth attempt to break into the stall. While IT Chapter One looked at the terror of youth—and, in Beverly’s case, the terror that comes with becoming a woman—IT Chapter Two examines the other side. She’s trapped, drenched in the metaphorical blood of her womanhood. Here, among the rising tide of pubescent youth, Beverly is forced to fight back against the men who reduced her body to a sexual plaything. While young Beverly had the help of the Losers Club to clean up the mess in her home bathroom, adult Beverly is on her own. But instead of being the damsel in distress who needs the aid of her male companions, she saves one of them from Pennywise’s clutches.

As for me, after getting a copper IUD, I’ve discovered that, true to its side-effect warnings, my periods are heavier. On more than one occasion, they’ve brought to mind another Stephen King reference, this time, the flooded hallway from the film adaptation of The Shining. As more women take the helm of horror movies as writers, directors, and producers, I would love to see films that explore menstruation from a more positive point of view. We don’t all have to be Carrie White or Ginger Fitzgerald, our periods ominous precursors to acts of violence. We could be a bit more like Beverly, whose period allows her to find sanctuary among her friends.

Read this Next: Loud, Proud, and Bleeding 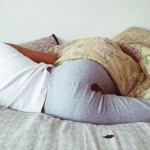 by Erynn Porter
Menstrual products are seen as a luxury rather than a necessity.

Jill Grunenwald is an INTJ Slytherin Scorpio Xennial writer and fat acceptance activist. She blogs about body liberation at The Year of the Phoenix and is the author of two memoirs, Running With a Police Escort: Tales from the Back of the Pack (Skyhorse, 2017) and Reading Behind Bars: A True Story of Literature, Law, and Life as a Prison Librarian (Skyhorse, 2019). She lives and works in Cleveland. You can follow her on Twitter and Instagram.