It's Not "Just Words" | Bitch Media 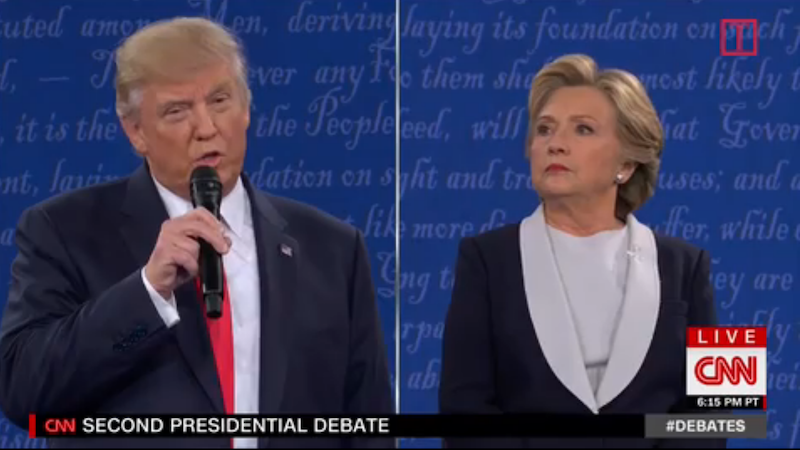 In last night’s debate, Donald Trump dismissed the seriousness of his comment about grabbing women “by the pussy” by saying, “It’s just words, folks.”

The presidential debate last night started out with moderator Anderson Cooper naming Donald Trump for what he is: someone who bragged to friends about committing sexual assault.

The 2005 tape of him saying he’s able to kiss and grab women with impunity because he’s famous certainly shows him bragging about sexual assault, but it struck me how surprising it felt to hear those words onstage from the mouth of a news anchor. It shouldn’t be such a shock to hear Trump’s actions described factually. But it was. During this entire presidential campaign, news agencies striving to be “objective” about Trump have instead given him a pass. Instead of describing Trump’s ideas as “bigoted” and “racist,” news organizations have called him merely opinionated and “controversial.”  For the past year, Trump has been spreading hatred of immigrants and Muslims. But he’s just been “fiery” and “plainspoken.”

He has consistently stirred up fear and hatred about immigrant groups and people of color and is still considered appropriate for featuring as a respected thought leader. “Trump is running one of the most bigoted presidential campaigns, but news networks have spent the last 10 months treating him like just an unfiltered, tough-talking conservative,” noted Carlos Maza in a video for media watchdog group Media Matters way back in May. “Since day one, Trump’s campaign has been defined by racial and religious bigotry.”

It seems like commentators finally decided he crossed a line when he uttered a word—pussy—that’s considered obscene by the FCC. Just a month before election day, it feels like maybe mainstream media has caught up to those of us who have been naming Trump for what he is for months. He’s someone who openly brags about his misogyny and racism. He’s a harasser. He’s an abuser.

Those were the attributes on full display during last night’s debate. It was hard to watch the entire 90-minute discussion without dissolving into a mixture of sadness and fury. During the course of the debate, numerous viewers noted how he kept creeping up behind Hillary Clinton, looming behind her in what looked like an attempt to physically intimidate her as she answered questions. He often lurked right behind her like a sniffling shadow even as she turned away to face the audience. It’s not just his celebrity that he uses to gain power over women. In his body language, he says, “I could overpower you.”

And then, of course, there are his words.

Trump responded to the question about sexual assault by dismissing his comment as “locker-room talk.” But that kind of downplaying of violent language and grotesque jokes sustains a culture in which women face rampant sexual assault. Then he pivoted—after a distracting diatribe about ISIS—to say he has great respect for women. He repeated that phrase over and over. After Cooper asked the question about sexual assault, Trump said some version of the line “I have respect for women” three times in a row, before adding, “And women have great respect for me.” When asked for another response to the tape bragging about sexual assault a few minutes later in the debate, Trump tried another angle: turning the issue back around on Hillary Clinton. He noted that Bill Clinton was “abusive to women” and that “Hillary Clinton attacked those same women and attacked them viciously.” He says Hillary Clinton laughed at a 12-year-old rape survivor.

Fact-checkers quickly debunked that, saying it’s entirely untrue that Clinton laughed at a rape survivor. But the idea was already out there, on national TV. That’s what Trump was aiming for—not accuracy, but a way to deflect attention away from himself and cast Clinton as the true villain.

Trump’s display during the debate was the definition of gaslighting, an abusive tactic that’s a hallmark of harassers. Here’s the three-point plan for dismissing accusations of harassment:

Trump’s behavior during the debate and during his entire campaign—and the lack of media naming it as harassment, abuse, and bigotry—is upsetting because it’s not just rhetoric. We all have dealt with men like Donald Trump in our own lives. Usually, they’re not given podiums and national air time, but often they’re in positions of power. We know guys who gaslight us, intimidate us physically, and grab our bodies without consent. And we recognize those behaviors in Trump. Seeing him pace, creeping behind Clinton and calling her a liar, is like watching a deeply troubling stage play of experiences many women endure during our regular lives. As reporter Catherine Pearson wrote this morning:

“Watching Clinton―a woman who has, for years, prioritized policies that promote fair pay and reproductive rights―stand up to Trump does not undo the pain his words have caused. But it served as a rallying cry for every woman who has ever felt her body threatened by a man who would try and claim it through words, touch, or legislation. It laid bare that, for better or worse, this presidential election has become a referendum on what America really thinks about women and how they should be treated.”

Words have power. Words can influence people. Words can sway elections. They dictate policy, relations, and how the rest of the world sees the U.S. as a whole. Donald Trump They aren't just words. A person doesn't spew that much vitrolic nonsense if they don't beleive it even just a little bit. A person with principles and morals wouldn't be caught dead saying such things. It is a slap in the face of intelligent people everywhere to stand on a stage and try to say 'it's just words'. For anyone out there that might be thinking "Oh, it's just words, it'll turn out alright...", it won't be. Go register, and go vote. Because it won't be alright and they aren't just words. You know who was one of the best speakers of his time, able to connect with the people in a way not at all unlike how Trump has? Hitler. I think we can all agree that in his case, it wasn't just words either. Go vote, go vote, go vote, don't count on everyone else to take care of it for you.