J. Cole’s Ego Is the Real Reason He Called Out Noname | Bitch Media 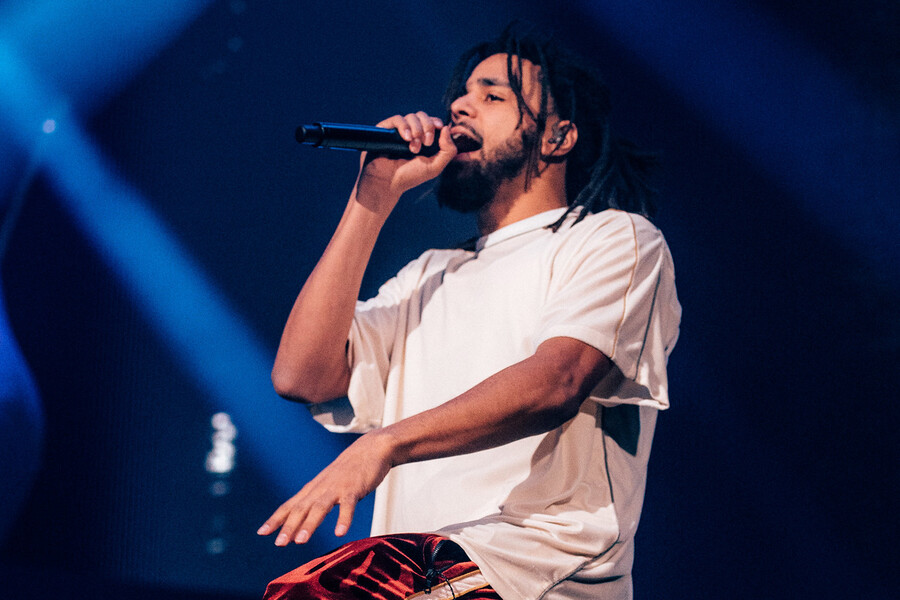 J. Cole is an egomaniac. That’s one of the only conclusions that can be drawn from his decision to slickly address Noname on “Snow on tha Bluff,” a surprise track he released on June 17. Cole’s also a genius rapper who has the prescient ability to use his talent on the mic to speak to the moment, especially when said moment involves rampant police brutality and broader racial discrimination, and he does so in a way that we can feel. We felt him in 2014 when he released “Be Free,” a single with artwork that featured a photo of Lesley McSpadden, Mike Brown, Jr.’s mother, looking grief-stricken and distraught after her son’s death at the hands of Ferguson police officer Darren Wilson. Cole repeating “All we wanna do is break the chains off/ All we wanna do is be free” and rapping that “That there ain’t no gun they make that can kill my soul,” sat in our chests, a reminder not only of his rapping prowess, but also of his ability to translate our immovable pain and lingering trauma into song.

In many ways, we’ve come to expect Cole to speak to the range of issues that plague Black Americans, whether it’s voicing dissatisfaction with the tenure of Obama’s presidency (“A man can dream can’t he?/ No disrespect, but in terms of change, I haven’t seen any/ Maybe he had good intentions, but was stifled by the system, and was sad to learn he couldn’t bring any,” he rapped on Late Show with David Letterman in 2014) or skillfully crafting “Change,” a stand out track from his 2016 album, 4 Your Eyez Only, to detail the fictional shooting of a 22-year-old boy named James and call for an end to intraracial violence (though, notably, the song did little to address the relationship between poverty and crime). So, of course, Cole’s voice was both expected and welcomed amid an uprising in the United States, fueled by the quick succession of murders of Black people—George Floyd in Minneapolis; Breonna Taylor in Louisville, Kentucky; and Ahmaud Arbery near Brunswick, Georgia—at the hands of vigilantes and police officers.

We know Cole’s lyrics have a tendency to tap into our collective rage, and he often backs up his rhymes with direct action, taking to the streets in his hometown of Fayetteville, North Carolina. Somehow though, “Snow on the Bluff,” couldn’t just address these broader issues, even as legislators begin grappling with police violence in tangible ways that could usher in true social change, including the possibility of demilitarizing and defunding police forces across the United States. Rather, Cole’s ego got in the way, leading him to direct his energy instead toward 28-year-old Chicago rapper and poet Noname rather than continuing—and possibly, furthering—the conversation about the longer, more transformative fight underway.

“My IQ is average, there’s a young lady out there, she way smarter than me/ I scrolled through her timeline in these wild times, and I started to read/ She mad at these crackers, she mad at these capitalists, mad at these murder police/ She mad at my [n-word], she mad at our ignorance, she wear her heart on her sleeve/ She mad at the celebrities, lowkey I be thinkin’ she talkin’ ‘bout me.” Many people quickly deduced that Cole was addressing Noname, given that she’d recently tweeted (and then deleted), “Poor Black folks all over the country are putting their bodies on the line to protest for our collective safety and y’all favorite top selling rappers not even willing to put a tweet up. [N-words] whole discographies be about Black plight and they nowhere to be found.”

Rather than overlooking this criticism, given that he’s been vocal about police brutality throughout his discography and has protested alongside activists and organizers, Cole took Noname’s criticism to heart, as if she were directly addressing him—rather than hip hop as a whole. It became an affront to his very existence, a way of passing judgment on him and other Black men in rap rather than a way of holding them accountable for inaction in a time of heightened racial tension. “How you gon’ lead, when you attackin’ the very same [n-words] that really do need the shit that you sayin’?/ Instead of conveying you holier, come help get us up to speed,” Cole rapped on “Snow on tha Bluff.” “Shit, it’s a reason it took like 200 years for our ancestors just to get freed/ These shackles be lockin’ the mental way more than the physical/ I look at freedom like trees, can’t grow a forest like overnight/ Hit the ghetto and slowly start plantin’ your seeds/ Fuck is the point of you preaching your message to those that already believe what you believe?”

Those who’ve been enmeshed in online feminist discourse, especially feminist discourse among Black people, are likely familiar with Cole’s directive: Though feminist theory is more readily available than it’s ever been, with scholars readily sharing their syllabi and publications offering up a proliferation of reading lists for budding feminists, there’s still a built-in undercurrent of expectation that Black women will teach what they’ve learned, even if their students—in this case, Black men—aren’t wholly invested in shifting their worldview as well. Black feminists, many of whom aren’t born with this knowledge and perspective, consciously seek out, read, and absorb critical texts and frameworks, and then do the hard work of incorporating it in their lives, effectively shifting their worldview and their approach to building community and seeking justice. And then, it’s on them to teach it to everyone else, especially Black men like Cole who aren’t at all interested doing that same level of interrogative work.

Anything less than making it as easy as possible for Black men is treated as traitorous. How dare you educate yourself and then not share that information when someone, who has chosen not to read what you have, challenges your perspective? Noname’s own journey toward better educating herself is instructive in this regard: After being called out online for expressing support for Black people participating in and benefitting from capitalism, Noname began reading books designed to further her own perspective about racism, classism, and other social ills. In 2019, after tweeting about Kali Akuno and Ajamu Nangwaya’s 2017 book, Jackson Rising: The Struggle for Economic Democracy and Black Self-determination in Jackson, Mississippi, and garnering some interest about what she was reading and what she was learning, Noname even created a book club.

She could’ve allowed ego to overrule her logic and doubled down on her wayward stance; instead, she not only read herself into unlearning, but she then created a space for others to embark on a similar journey together. It’s an alternative response and approach than the one Cole proposes in his song and subsequent Twitter thread. Even after engaging with criticism, he still ultimately put the onus on Noname to teach him. After encouraging people to follow Noname on Twitter, he then tweeted, “I love and honor her as a leader in these times. She has done and is doing the reading and the listening and the learning on the path that she truly believes is the correct one for our people. Meanwhile a n-word like me just be rapping. I haven’t done a lot of reading and I don’t feel well equipped as a leader in these times. But I do a lot of thinking. And I appreciate her and others like her because they challenge my beliefs and I feel that in these times that’s important. We may not agree with each other but we gotta be gentle with each other.”

Holding people, including Black celebrities, accountable for their inaction or misguided action isn’t, as Cole declares it, an attack or an attempt to create undue separation between Black men and Black women. It’s not an ungentle or harsh approach. Instead, it’s a push for better because Black feminists understand—in ways that some others don’t—that a single person can’t be free. We must all collectively have freedom or none of us are free; that call for community, for a shared vision, for a pathway forward that considers and pushes toward liberation for all, requires accountability. Otherwise, we will simply replicate the very systems we seek to dismantle, only this time, it will only be a patriarchal, homophobic, transphobic, and classist world order we must contend with.

For many cisgender, heterosexual Black men, J. Cole included, ego gets in the way of reimagining our current world because it first requires them to admit that they’ve been complicit.

For many cisgender, heterosexual Black men, Cole included, ego gets in the way of reimagining our current world because it first requires them to admit that they’ve been complicit in benefitting from systems that oppresses Black women and murders Black trans women. Holding themselves accountable forces them to do the difficult work of realizing that they’ve been socialized into beliefs that are harmful and going on the never-ending journey of unlearning those beliefs and adopting new ones. Holding themselves accountable would put them in the difficult position of holding other Black men accountable for their harm—calling out their homophobia, their transphobia, their understanding of women as objects to be conquered, their allegiance to a way of life that only benefits them and doesn’t contribute in any substantive way to a more equitable world.

So, instead of embarking on that journey for themselves, these men put the onus on those who’ve already done the work to educate them, and when we educate them, to do it nicely enough to cradle their ego, and to give them the space and grace to grow, and to never bring up their indiscretions, even when said missteps are harmful. Aren’t we tired of seeing this same script unfold, over and over again, online and in our real lives? Aren’t we tired of watching Black men flinch at the mere suggestion that their beliefs are sexist, homophobic, or transphobic? There might be light at the end of the tunnel: At the end of the track, Cole raps, “But damn, why I feel faker than Snow on Tha Bluff?/ Well, maybe ‘cause deep down I know I ain’t doing enough.” Acknowledging what he hasn’t done might be a step in the right direction, but demanding that those who’ve done this work must teach it takes him two steps back. No matter his reasoning or his—desperate?—quest to be educated, the message of his song—stop killing us, help us make sense of the senseless, let us be free—has been overshadowed by petty barbs driven, solely and wholly, by his ego.