“Jackass” Made Me the Trans Woman I Am | Bitch Media

“Jackass” Made Me the Trans Woman I Am 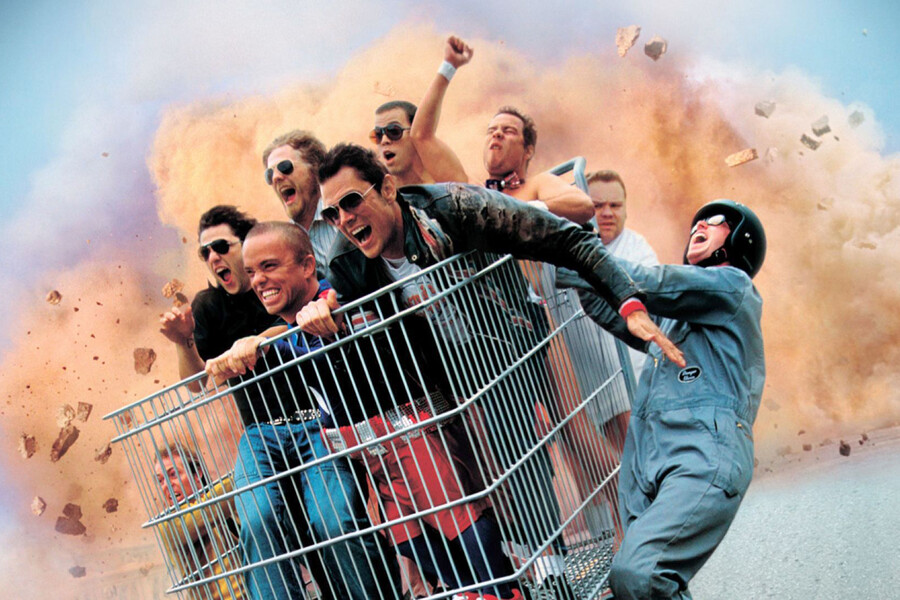 There were four of us sitting in a 1996 Toyota Tercel. Two in the front, two in the back. It was the dead of winter in the Yukon in 2002, and a snowplow had gathered all the snow in the parking lot into a single mountain in the middle, all jagged chunks of hard packed snow and gravel. We looked at each other through the thick, dank weed smoke and asked a single question: Ready? With unanimous agreement, the driver stomped the gas pedal to the floor and drove as fast as he could directly at the snowbank.

We were just four among the throngs of people introduced to Jackass in October 2000, when the gonzo collection of pranks, stunts, and hidden-camera shenanigans set viewership records for MTV. An absurdist take on shows like Candid Camera and America’s Funniest Home Videos, the Jackass crew, led by ringmaster Johnny Knoxville, took the prospect of debasement in the pursuit of attention and threw it into a ball pit full of anacondas. Filling your underwear with bees? Getting smashed in the dick by a sledgehammer pendulum? Filming the bystander reactions to a hearse driver who can’t keep a casket from repeatedly falling into the street? All this and more made Jackass a glorious celebration of intentionally stupid and frequently injurious behavior.

For me and my friends—all of us (at the time) straight, white guys—Jackass perfectly reflected our senseless desire for irreverent disaster. At a time when reality TV was still nascent, Jackass was a hurricane, airing for three seasons between 2000 and 2002 before leaving the network amid efforts to stem the tide of would-be copycats and being reborn as a series of films. The core cast of Johnny Knoxville, Chris Pontius, Steve-O, Jason “Wee-Man” Acuña, Ehren McGhehey, Dave England, Preston Lacy, Bam Margera, and Ryan Dunn (who passed away in 2011) have stood more or less stalwart next to each other for two decades, through hair-clipper sneak attacks, repeated concussions, animal bites, and beyond. Watching those early episodes as an awkward 17-year-old on my second attempt to graduate high school, I was immediately struck by the interactions among Jackass’s congregation of heterosexual men.

I knew, for instance, that many of them came to Jackass from the realm of skateboarding, but I saw little of the bullying bravado I’d witnessed at my local skate park, where constant cries to “be a man” and “grow some balls” were attached to urgent pushes to grind rails and drop into empty concrete bowls. By all outward appearances, I was a young man among other young men, but, internally, I struggled with that identity. Despite being told repeatedly I needed to learn to be one, I never quite felt like a man. I yearned for the thrill of skating, the adrenaline rush of silicone wheels taken to pavement and the freedom of catching air, but I recoiled at the aggressive nature with which my peers pushed themselves toward an image of masculinity.

The Jackass guys were so at home in their masculinity, but when they shoved and slapped and goaded each other, it felt playful rather than angry. They worked together to outdo one another in painful slapstick, eager to see how far the others could go. Hearing Knoxville’s unmistakable laugh ringing out over the concrete as he ran from, or more often to, danger underscored that the danger itself wasn’t the point—but rather the thrill of it all. The desire to be more aggressively masculine than the guy standing next to you doesn’t mean anything when the man standing next to you is also being shot in the balls with a paintball gun.

As I tried to find my place in the skate park, it seemed that my masculinity was measured in the prospective inches of my genitalia. And as I grew to understand my body as one I felt disconnected from, I developed anxiety around not being classically manly enough. I just wanted to learn to kickflip down some stairs; balls didn’t seem to be necessary to do that. Jackass, by contrast, seemed to make an enemy of balls: Along with dicks, they were under constant threat of of attack in scenes like “Muscle stimulator,” in which the core cast all affixed the titular electrified nodes to their crotches and alternated between cringing in pain and laughing hysterically as they electrocuted their junk.

“Jackass” flipped “no homo” on its head like a runaway golf cart.

In other words, there was a notable lack of language around dicks being the core of a man’s strength. No one yells “be a man” as Ehren McGhehey, wearing a mouse costume, strives to crawl through a minefield of Victor traps in a desperate attempt to get a novelty bit of cheese. Instead, Jackass cuts to cast members propping each other up as they contort with laughter at the sight of their friend giving everything of himself in an earnest quest to achieve greatness.

In the late 1990s, the phrase “no homo” was suddenly ubiquitous, coined by insecure men to signify affection for one another without questioning their precious heterosexuality. Jackass flipped “no homo” on its head like a runaway golf cart: Knoxville and crew were often half- or fully naked in the course of turning each other’s dicks into puppets or attaching baby alligators to one another’s nipples. By the time the second Jackass film premiered in 2006, the boys were bona fide gay icons and Knoxville was tapped by outlaw filmmaker and Jackass fan John Waters to play the lead in 2004’s A Dirty Shame. By the third film, the cast was posing in front of a giant rainbow (a nod to the logo for Knoxville’s production company, Dickhouse Productions) and Steve-O was telling Vanity Fair that the crew “always thought it was funny to force a heterosexual MTV generation to deal with all of our thongs and homoerotic humor. In many ways, all our gay humor has been a humanitarian attack against homophobia.”

The opening night of the first Jackass movie, in October 2002, my friends and I saw it twice in a row, sneaking beers into the empty soda cups we bought at the concession stand. You never would’ve thought that the show you watched on MTV where a grown man sits in an alley wearing a protective cup while children hit croquet balls at his dick would turn into a two-hour piece of film. But here we were. That first movie is a perfect piece of outsider art, a collection of skits that run the gamut from the classic reckless prank (“Rent-a-Car Crash-Up Derby”) to the let’s-tease-a-dangerous-animal experiment (“Alligator Nipple Bite”) to the celebrity cameo (“Off-Road Tattoo,” featuring Henry Rollins). In one perfect piece of comedy (“Department Store Boxing”), Knoxville attempts to take on former heavyweight champ Butterbean in a busy department store. After goading Knoxville to land just one punch, Butterbean proceeds to pummel him to the point of concussion. Ever the master of expert timing, when Knoxville is examined by an on-staff medic, he somberly inquires “Is Butterbean okay?”

Jackass taught me that my worth was not in “being a man,” nor in seeking to be strong in the classically masculine mind. Jackass’s unofficial theme song—Roger Alan Wade’s “If You’re Gonna Be Dumb, You Gotta Be Tough”—might say it best: “When you get knocked down / you gotta get back up.” It’s not strength that matters, but fortitude and resilience and the ability to laugh in the presence of abject danger. The newly released Jackass Forever is the fourth mainline film in the Jackass cinematic universe, and reunites Knoxville, Steve-O, and the gang (with the exception of Margera, who is largely absent after being fired for breaking a sobriety clause) while introducing a new generation of jackasses whose bodies can withstand a bit more battering than their now-middle-aged mentors. In the 20 years since those back-to-back viewings of the first film, I’ve found my own strength, pushing myself past the limits I was afraid of and coming out as a trans woman.

The pop-culture world has also changed: In the years since Jackass made the scene, both the appetite and the outlets for the show’s gleeful public chicanery have increased dramatically. With the advent of YouTube, TikTok, Instagram, and influencer culture, anyone with a dream and a death wish can now spin pranks into wealth, fame, and brand sponsorships. But what Jackass has—what makes it “forever”—is genuine heart. With every rigged-together slingshot that launches one of them into a pool of raw sewage, there’s care and support amid the absurdity. The dick-punches never punch down. Jackass is only here to show us how far Knoxville and company are willing to push themselves and each other for their laughs and for ours. Jackass happens with us, not at us.

Back on that late night in the Tercel in the Yukon, the four of us hollered together as the car careened forward into the mountain of compressed snow. Jolted from our seats in the ensuing crash, we laughed until we cried and we slumped over to recover with our faces pressed against the seats. We were fine. We survived. And we knew what it felt like to crash and to walk away.