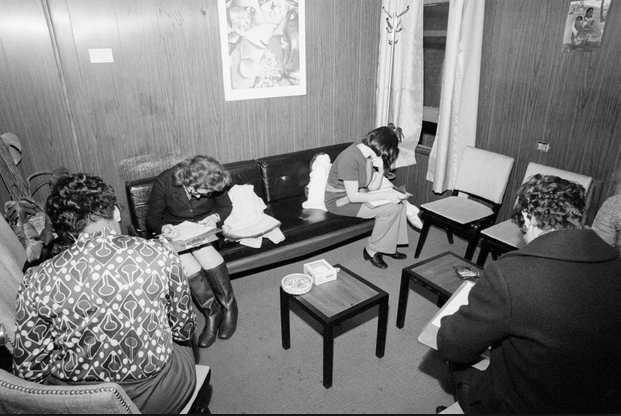 With the recent success of Hulu’s original series The Handmaid’s Tale—which won four of the five Emmy awards for which it was nominated—the future of reproduction is becoming a hot topic in media. Along with Black Mirror, the appeal of dark dystopian TV shows feels depressingly right for a time in which almost everything seems majorly fucked. The landscape of reproductive rights has always been a bit bleak, since women’s decisions have largely been imposed by the will of men, but it’s chilling to realize that the ominous worlds created in both The Handmaid’s Tale and Black Mirror represent a future that might not be far off. Perhaps looking at the origins of the reproductive-justice movement is a good place to start envisioning new ways to respond to a supposedly “pro-life” Republican government whose only interest in human life ends with the legislation of people’s bodies.

Elizabeth Moss, who won Emmys for both the role of Handmaid’s Offred and her part in producing the series, recently announced her next project: the upcoming Simon Curtis film Call Jane, which details the work of the real-life Jane Collective. The collective, established on Chicago’s South side in 1969, was a group of women who in pre-Roe v. Wade America helped make abortion more accessible for women in Chicago and elsewhere in the midwest. It was entirely underground, operated largely out of the apartments and houses of its members. At first, Jane was a network through which to find abortion services, but members—women with regular day jobs, housewives, and more—later trained to be able to perform safe abortions themselves.

In a time before abortions were legal or safe, the Jane collective took matters into their own hands, as women before them had always done: In its lifespan, Jane performed 11,000 abortions with no fatalities, charged for the service on a sliding scale, and checked up on the patients after their abortions. Things came to a halt only when the police raided their facilities and took the women into custody. The trial, however, was dropped when abortion was finally legalized by the Supreme Court in 1973.

In “Call Jane,” Moss will play a married woman who becomes pregnant and calls on the Jane Collective for help. The screenplay was written by Hayley Schore, in collaboration with Roshan Sethi, a medical resident who worked with Schore on the CBS medical drama Code Black. With so many men taking it upon themselves to write (inaccurately and awfully) women’s history into film, TV, and books, it’s a sigh of relief knowing the screenplay is in the hands of two people with a desire to get medical history correct.

In fact, abortion—and the Jane collective in particular—seems to be a hot topic in the film and TV industry. Amazon recently acquired the screenplay for This is Jane, a film based on Laura Kaplan’s 1995 book The Story of Jane: The Legendary Underground Abortion Service. This might be in response to Hulu’s great success with The Handmaid’s Tale, and it would be the perfect opportunity for Amazon to compete with Hulu to wrangle in a feminist audience. (Indeed, given the fact that the film is being produced entirely by men, it’s probably fair to assume Amazon’s interest is fueled more by competition than by a genuine interest in abortion history.)

There’s also the indie (and probably better) option for Jane’s story, Ask for Jane, written and directed by Rachel Carey, which tells the stories of several women who received services from Jane in the ’70s. Judith Arcana, a former collective member, will serve as a consulting producer for the film, so already it’s looking like this will be the film to see, rather than Amazon’s.

As an abortion doula who lives and works in Chicago, I have a deep affinity for both abortion access and my city (in my unbiased opinion, the best city in the world). Naturally, I’m hoping these upcoming films will accurately represent Jane’s influence and impact on Chicago. When it comes to the subject of forced pregnancies and childbirth, onscreen representation tends to be dominated by mostly white narratives: The white characters in Children of Men placed the responsibility of being the last pregnant person on a black woman; Mad Max: Fury Road’s harem of babymaking hotties were the catalyst for action. Meanwhile, the people most likely to targeted by measures for fertility control—ads for family planning, warnings about abortion, unauthorized sterilization procedures—have historically been black and brown women.

Although the history of Jane is rooted in Hyde Park, a largely black community on Chicago’ South side, Call Jane’s casting of Moss in the lead role points to the true-to-life race divide in the collective’s reach. At Jane’s inception, the collective was mostly white, middle-class members: Their reckoning with race didn’t occur until a Black woman, known as Lois, came for an abortion and laid things straight out: “You guys are the white angels that are going to save everybody and where are the black women at?” Soon after, Lois joined the collective and counseled the Black women who came to Jane for their services.

Lois understood that counseling for a Black working-class woman seeking an abortion was much more complex than it was a white middle-class woman: “We were trying to, one, deal with being Black women; two, deal with prejudice; three, deal with the structure, being single parents and staying alive. That was our struggle.” Lois’s friends also cautioned her about being apart of Jane if the collective ever got found out by authorities: As a Black woman, the repercussions for her would be much more severe than for her white partners. Will the upcoming films, both big-budget (Amazon) and indie (Ask for Jane, Call Jane) properly address the intersecting complexities of abortion access to non-white women of color, or keep to a safe and neatly packaged white, middle-class narrative?

The Jane Collective began because access to safe abortions were difficult for all women, and these days, with abortion legalized, access is afforded mostly to higher-income neighborhoods and industrialized cities. Since 1976, the Hyde Act has blocked federal funding for abortion services, with these narrow exceptions: when continuing the pregnancy will endanger the woman’s life, or when the pregnancy results from rape or incest. Medicaid cannot cover abortion even when a woman’s health is at risk and her doctor recommends she get an abortion. The Hyde Act is an example of legislation that targets working-class women disproportionately than middle and upper-class women. When revisiting the past and envisioning the future (however scary as that task might seem), it’s important to center not only the women who started the movements, but the women who are most at the crosshairs of reproductive danger.