Smoke SignalBuilding the Past, the Present, and the Afrofuture 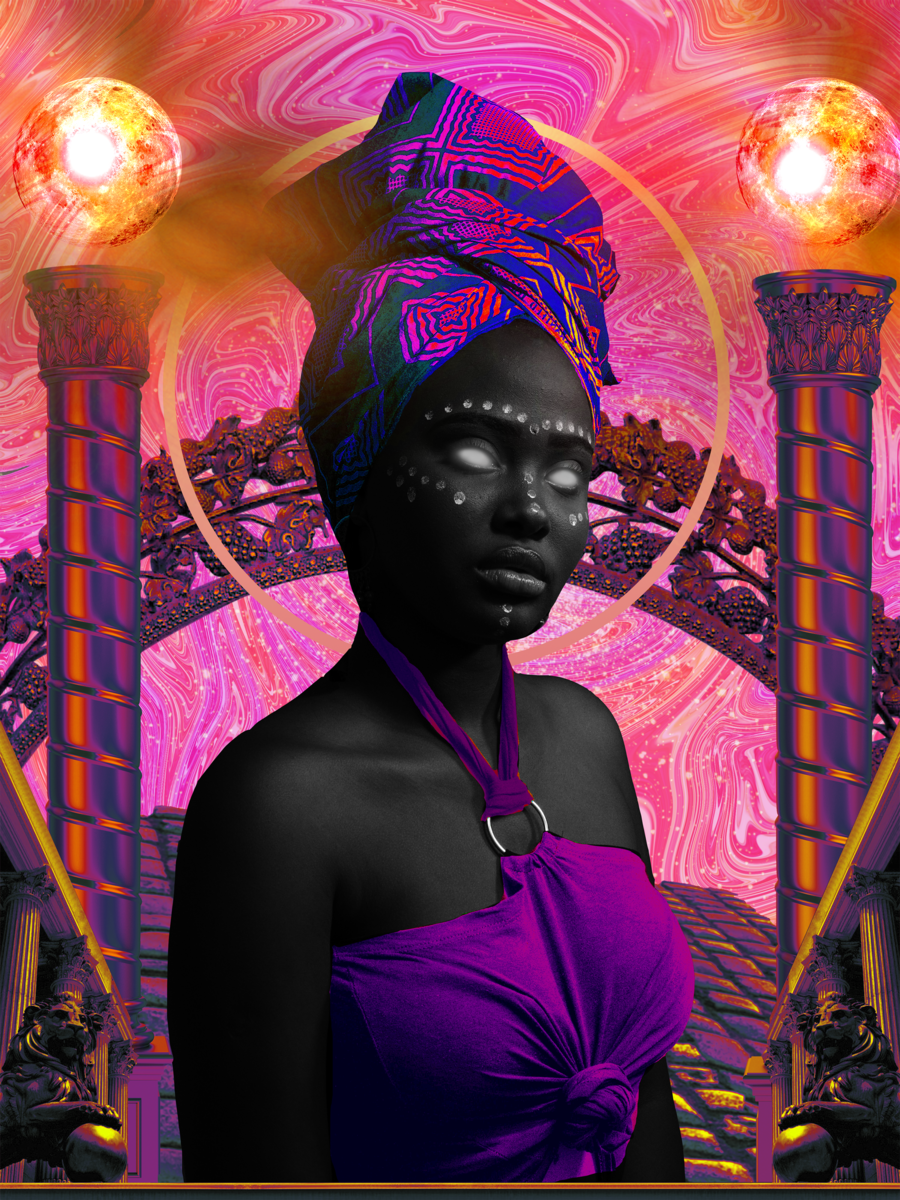 The future feels deeply uncertain, especially for Black folks and other marginalized communities. It seems fitting, then, that both Octavia Butler’s 1993 novel Parable of the Sower and Janelle Monáe’s 2018 “emotion picture” Dirty Computer—two of the most meaningful pieces of Afrofuturist art—open with smoke. In Parable of the Sower, forest fires and other environmental catastrophes cause smoke to engulf the fictional town of Robledo, California; in Dirty Computer, Monáe and other Black captives are swallowed by smoke as white medics experiment on them. In both worlds, smoke functions as a visual representation of societal distress: The two protagonists, who are both Black women, are living in a hazy and unclear reality that might lead to them being harmed. And though both texts are fictional, the conditions respectively chronicled in Parable of the Sower and Dirty Computer offer scenarios that are startlingly close to their audience’s current reality.

With global concerns such as poverty, homelessness, and climate change on the rise, we’re increasingly regressing—socially, culturally, politically—and entering dark times with an unclear future. With this as our current reality, it can be difficult to imagine any sort of positive outcome, particularly for those of us in marginalized communities. This is perhaps why so many Black artists are now turning to Afrofuturism to reimagine what our future could look like. The term “Afrofuturism” was first coined in white author Mark Dery’s 1994 essay “Black to the Future,” though Black scholars have since claimed and expanded on the idea. At that time, Dery defined Afrofuturism as “speculative fiction that treats African American themes and addresses African American concerns in the context of 20th-century technoculture.” More recently, in a 2015 op-ed in the Guardian, Northwestern University journalism professor Steven W. Thrasher further defines Afrofuturism as the “reimagining [of] science and the future from a Black perspective,” which more accurately captures the goals of the genre today as it reenvisions the overall future of Blackness rather than strictly focusing on its connection to technology and science fiction.

From the beginning, Black women have been leading voices in Afrofuturism: In the ’90s, creatives ranging from Butler to speculative fiction author Nalo Hopkinson to innovative musician and producer Missy Elliott used their art to reimagine the future while radically centering the needs and perspectives of Black communities. After being a producer, Elliott transitioned to being a recording artist. In her early career as a hybrid singer-rapper, Elliott explored a Black futuristic aesthetic through her music videos, including 1997’s “Sock It 2 Me” and 1999’s “She’s a B**ch,” with visuals of Black people jetting off into space and exploring different galaxies. On the other hand, Butler and Hopkinson used science fiction in 1979’s Kindred and 2003’s The Salt Roads, respectively, to explore the impact of institutionalized racism on future generations of Black people who have the capacity to break the limits of linear time, reconnect with their ancestors, and rediscover their culture.

Throughout such works, female Afrofuturist artists are radically using their personal narratives to explore the most pressing issues affecting the Black community—and the world— today. While most Afrofuturist work is not directly autobiographical, many Afrofuturists include important aspects of their personal histories or identities in their art: For example, Jane 57821, the protagonist in the Dirty Computer “emotion picture,” is a queer Black woman who’s fighting to maintain her individualism within an oppressive white power structure, just as Monáe has fought to do as a Black artist in a white-run music industry. Weaving personal narratives into the art itself appears within the very fabric of womanist Afrofuturist art: Parable of the Sower, for example, is written in the form of Lauren’s diary entries, while Dirty Computer highlights various memories of Jane 57821, played by Monáe. Butler became perhaps the most celebrated voice of Afrofuturism with the release of Parable of the Sower, which follows Lauren Olamina, a 15-year-old Black teen girl.

Rather than reimagining our future, today’s Afrofuturist art blurs the lines between present and future, fact and fiction, and fantasy and reality, presenting a way for Black creatives to model collective resistance for anyone who has ever been deemed “other.”

The novel begins in 2024 and proceeds to illustrate the impact of myriad catastrophic conditions: Climate change has created a huge depletion of natural resources, homelessness and poverty have drastically increased, and there’s a huge wealth disparity that’s continuing to widen, with wealthier families like the Olaminas living in gated communities while the majority of their neighbors sleep on the streets. Parable of the Sower embodies the precision of Afrofuturism, offering a frighteningly accurate read of the “future” we’re now living in. This tradition continues through modern works, including Get Out, Black Panther, and Monáe’s music, which tend to focus on some of our most pressing social issues, such as those centered on class and the consequences of mass surveillance.

While Get Out offers Black audiences a chance to reflect on the role of whiteness in altering our view of our own identity, Black Panther gives viewers an exaggerated version of the critical relationship between the African diaspora and technology, and Dirty Computer imagines a world where Black people have more control over our manipulative and exploitative U.S. government. Their social and political relevance helps explain each of these works’ wide appeal, both to the communities that they’re directly addressing and audiences at large. While many of these problems have historically been viewed as “Black” issues, our culture has devolved to the point that these are almost universal concerns. Therefore, rather than reimagining our future, today’s Afrofuturist art blurs the lines between present and future, fact and fiction, and fantasy and reality, presenting a way for Black creatives to model collective resistance for anyone who has ever been deemed “other.” Since 2003, Monáe’s audio and visual albums have focused on the intersections of race, gender, and sexuality, but Dirty Computer might be her most prolific work.

In the film, Monáe depicts a dystopian realm where the government treats Black people as “dirty computers,” rounding them up, wiping their memories, and then brainwashing them until they become mindless servants. Dirty Computer comments on governmental abuses of power toward marginalized communities and the detrimental effects that increased surveillance has on Black people. At the movie’s end, Monáe and her costars, including Gabrielle Union and Jayson Aaron, use the same methods that kept them hostage to overthrow their oppressors and escape captivity. In this way, Monáe calls upon the tradition of Black resistance under an oppressive white regime and reminds her marginalized listeners that we can survive seemingly hopeless abuses of power just as we have been doing for centuries. As Monáe’s work makes clear, Afrofuturism will continue to be a relevant and pioneering genre for ages to come, and Black women will continue holding the mantle of using art to reimagine Black futures.

Read this Next: Listening to Janelle Monáe