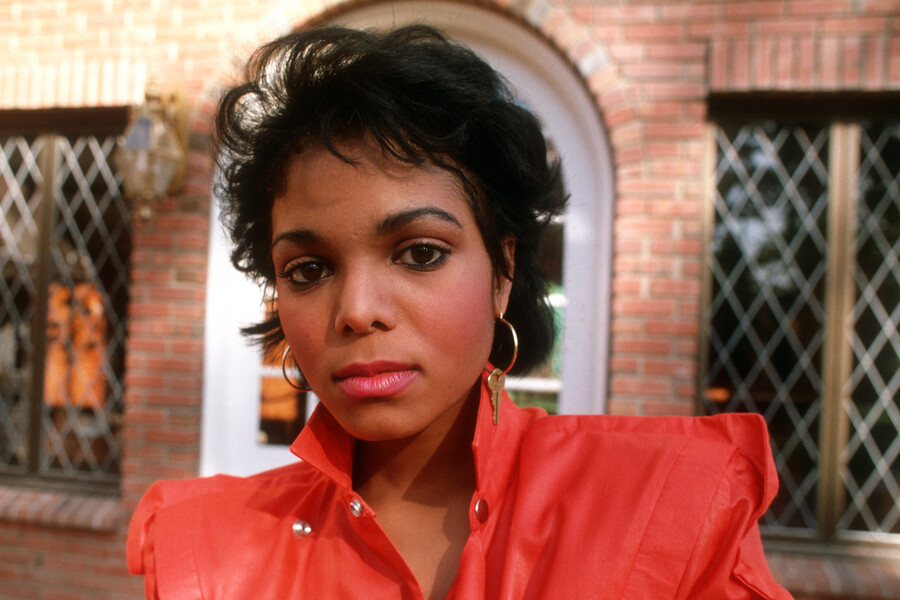 Who is Janet Jackson? We’ve wanted to know the “real” Jackson for years. Over the course of her decades-long television, film, and recording career, the superstar has blazed a path true to her own singular vision. The famous last name may have opened doors, but once Jackson claimed her autonomy, she solidified her creative and cultural power. Premiering on Lifetime and A+E at the end of January, JANET JACKSON. attempts to demystify the pop icon’s private and public persona. Released in celebration of the 40th anniversary of her self-titled debut album, the four-hour documentary promises an “intimate, honest and unfiltered look at her untold story.” Four sleekly produced episodes cover notable milestones and controversies, including her secret marriage to James DeBarge at the age of 18, the recording of her breakthrough album Control (1986), the start of the 1990 Rhythm Nation tour, the 1993 black-and-white Rolling Stone cover, the contentious 2004 Super Bowl Halftime show, and her induction into the Rock & Roll Hall of Fame in 2019. Family members, such as sister Rebbie and brother Tito, provide commentary to supplement Jackson’s interview answers. Archival footage, home movie clips, and photos capture Jackson’s rise from Michael’s little sister to international titan. Jackson allows herself to be vulnerable, sometimes crying on camera. However, there are some things that Jackson—who executive produced the documentary—simply won’t unpack fully. Viewers are always kept at an arm’s length. For all its attempts at unabashed honesty, JANET JACKSON. is deceptively guarded: Jackson still seeks shelter in an unknowable self, hidden from even her closest family and friends.

Pop culture’s most revered heroines often have an easily digestible origin story. For Janet Jackson, the beginning of her narrative is always traced back to her late father and former manager Joseph “Joe” Jackson. The Jackson family mythology, relayed by the media as a mix of the elusive American Dream and the triumph of Black excellence, can’t be separated from Joe’s initiative. At the start of the documentary, we learn that the film crew began following Jackson in 2017 and spent five years with her. The opening scene shows Jackson in the back of an SUV, traveling the streets of her hometown, Gary, Indiana. Shots of her modest childhood home emphasize the family’s rags-to-riches tale. Early on, it’s clear that Joe’s influence looms over Jackson’s identity as a daughter and entertainer. Jackson’s loyalty is unwavering, and she repeatedly praises her father, who died in June 2018. He’s a “goodhearted guy” who “went through a lot,” she says. And while Jackson says that her mother Katherine Jackson saw her children’s talent, the series depicts Joe as the key to their success.

To the outside world, Joe was both a savvy businessman and an imposing tyrant who mentally and physically abused his children. A 2003 ITV documentary with British journalist Martin Bashier (whom the BBC said had used “deceitful” tactics to obtain an infamous 1995 interview with Princess Diana) was seen as definitive proof for many fans, wherein Michael said that Joe would hit him with a belt as well as “cords, whatever was around.” After Michael’s death, Joe denied these allegations in 2009 on Larry King. In 2021, members of the Jackson family said Bashier’s incendiary film contributed to the cause of Michael’s death. Janet Jackson addresses these claims in the 2022 documentary and justifies Joe’s actions. “Discipline without love is tyranny…and tyrants they were not,” Jackson firmly says about her parents. Joe’s disciplinary parenting style is framed as a blessing learned in hindsight, but there are instances when Jackson allows herself to be less forgiving. When she talks about performing with her brothers in Las Vegas at the age of seven, there’s a moment that seems to imply that she never had a choice: “I don’t ever remember being asked. I just remember being put in it.” By the time she was 16, Jackson began to build a solid acting resume. She had recurring roles on Good Times, Diff’rent Strokes, and Fame. She’d been thinking about enrolling in college to study business law, but Joe’s belief in her musical destiny stopped her. For Jackson, the family business was not a matter of convenience but a mandatory obligation.

The documentary wants to establish a narrative that celebrates Jackson’s inherent resilience—particularly in the context of familial and romantic relationships with men. Jackson avoids assigning any blame or judgment that would label her a victim. The topic of control isn’t limited to an artistic era, and her fight for independence is an anchoring theme: freedom from her father, ex-husbands, and long-term boyfriends. Jackson’s 1984 elopement with R&B singer James DeBarge, which was annulled after a year in November 1985, is discussed briefly. Love wasn’t enough to salvage the marriage; the pair separated after Jackson discovered he was abusing drugs. Jackson also shares that DeBarge left her alone in their hotel room for three hours on their wedding day. Later, she talks about roaming the streets at night to search for her absent husband and fighting with him when she tried to flush his pills down the toilet. Jackson is careful not to villainize her ex: “I saw the good in him as well, and I just wanted that to take precedence as opposed to this ugliness because I knew that he needed help. But I wasn’t the help that he needed.” Jackson’s first marriage wouldn’t be the last time she’d push forward in spite of a man’s emotional baggage.

Her seminal 1986 album Control was as much a new chapter as it was a personal manifesto. Jackson’s first two studio albums, her 1982 self-titled debut and 1984’s Dream Street, had been handled by Joe, from the finished material to the final cover. Control was a defiant claim of total autonomy; Jackson fired her father and hired A&M executive John McClain as her manager. McClain introduced her to songwriting and production duo Jimmy Jam and Terry Lewis, who were members of Morris Day and The Time and had previously toured with Prince. Through this collaboration, Jackson finally found her voice: The album marked the first time she earned songwriting and production credits. Chart-topping hits—“Nasty,” “What Have You Done for Me Lately,” and “The Pleasure Principle”—were accompanied by videos that enjoyed heavy rotation on MTV. The album took Jackson out of her famous brothers’ shadow and made her a star in her own right.

Control then led to 1989’s socially conscious Rhythm Nation 1814 and showcased Jackson’s ability to write about heavy socio-political issues. In the 1990s, Jackson’s career continued climbing to dizzying heights, with the release of 1993’s Janet, her film debut in John Singleton’s Poetic Justice alongside 2Pac, and 1997’s The Velvet Rope. This rich period of artistic discovery and boundary-pushing innovation coincided with her marriage to her second husband, director René Elizondo Jr. Unlike DeBarge, Jackson’s relationship with Elizondo is portrayed as a tense battle between inhabiting the role of an equal partner and the role of a muse. The documentary portrays him as a supportive witness to her genius and instrumental to pivotal moments in her career. He is the man who encouraged Jackson to embrace her sexuality (the 1993 Rolling Stone cover features a topless Jackson with her breasts covered by the hands of Elizondo) but also became another male authority figure who wanted to control her public image. Elizondo’s creative direction sometimes had damaging consequences, which didn’t get past the closest people in Jackson’s life. Wayne Scot Lukas, Jackson’s friend and former stylist in the ‘90s and early 2000s, noted the amount of control Elizondo had over the singer. In one behind-the-scenes video clip, Elizondo says, “I’m an extension of Janet.” And although she refrains from going too deep into her ex-husband’s flaws, Jackson says that he would criticize her weight, which triggered her history of emotional eating rooted in childhood insecurities. The blurred lines between professional and marital partnership were further strained by Elizondo’s addiction to painkillers. In 1999, the couple separated; they divorced in 2000. During the divorce process, Elizondo filed a $10 million lawsuit against Jackson and later settled for an undisclosed sum. Despite this rollercoaster of a marriage, Jackson doesn’t dwell on the negative. Again, the documentary frames the fallout of another marriage as a testament to her underlying strength. The filmmakers, including Jackson herself, know that we want more of the singer’s interiority, but the storytelling is limited by its predetermined narrative arc.

The film clings to a neat resolution that the overarching story can’t quite fulfill.

Some of the biggest controversies of Jackson’s career are approached with similar hesitation. When discussing her brother, Jackson refutes all allegations of child sexual abuse. She recalls the discomfort she experienced when filming the video for Scream, a duet she recorded with Michael for his 1995 album HIStory: Past, Present and Future, Book I. What Jackson thought could have been a bonding moment turned into an unspoken competition orchestrated by Michael’s record label, which “blocked” her from knowing when he was on set. “I wanted it to feel like old times between he and I, and it didn’t,” she explains. The conversation about the Super Bowl XXXVIII halftime show is met with a parallel artificiality. When compared to the in-depth coverage by the New York Times documentary Malfunction: The Dressing Down of Janet Jackson (2021), we’re still left wondering how the singer felt about the racist and misogynistic backlash that followed. The Times documentary, which explains the context of the culture wars of the ‘90s and the rise of conservatives’ push for “family values,” provides insight that JANET JACKSON. avoids. The 2022 documentary doesn’t grapple with the underlying misogynoir that propelled right-wing outrage or the role of former CBS chairman Les Moonves, who later resigned from the company in 2018 after multiple allegations of sexual harassment. Justin Timberlake is handled with kid gloves and absolved of accountability for his actions. In a short video, Jackson explains that they’ve long since patched things up and are friends, but it’s an unsatisfying conclusion to a monumental career low. Last year, Timberlake, who headlined the 2018 Super Bowl LII halftime show, issued a formal apology to Jackson and Britney Spears on Instagram. For many fans of both singers, Timberlake’s statement was too little, too late and spoke to the unyielding sexism of the music industry and patriarchy overall.

Lifetime’s documentary ends with Jackson’s 2019 induction into the Rock & Roll Hall of Fame. It’s a crowning jewel in the icon’s long standing list of achievements. The recognition almost seems to function as the industry’s olive branch, a way to rectify past slights. But the film clings to a neat resolution that the overarching story can’t quite fulfill. At this point, Jackson’s cultural and artistic contributions are not up for debate. As echoed by various celebrity friends and associates, she’s the blueprint for female pop stars, especially Black women. The docuseries doesn’t need to convince us of her impact, but it should be able to show us a side of Jackson that can’t be found in a Behind the Music episode. Ultimately, JANET JACKSON. provides a chronological overview of the star’s breathtaking journey that advocates the benefits of forgiveness, no matter how severe the battle scars.

Read this Next: Stripping Point 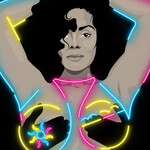 by Vanessa Willoughby
Janet Jackson was punished for 9/16 of one second of nudity, while Justin Timberlake rose from her post–Super Bowl ashes.