Jeff Sessions is a Wolf in Sheep’s Clothing | Bitch Media

Jeff Sessions is a Wolf in Sheep’s Clothing 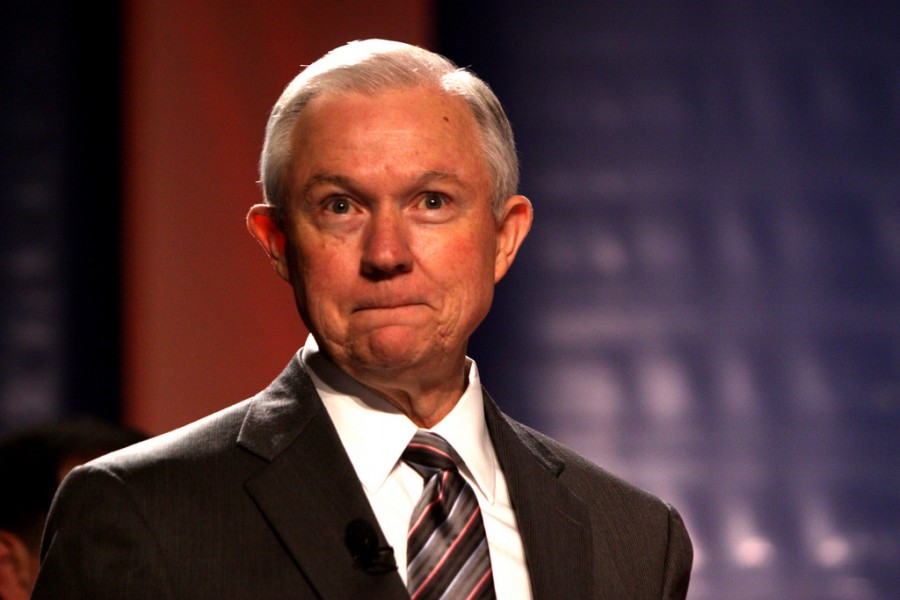 “He looks like a nice grandpa,” I thought while watching Jeff Sessions’s confirmation hearing early Tuesday morning. That was before I noticed he actually brought a crowd of his own young granddaughters in matching blue dresses and white hair ribbons sitting on his lap and the laps of his family members.

During the first day of his confirmation hearing to serve as attorney general, Sessions’s strategy was to approach every question with a nice voice and a smile, praise for his questioners, careful phrasing, and a conveniently foggy memory.

But Jeff Sessions is not a nice grandpa.

In 1986, Jeff Sessions was deemed too racist to be a federal judge because his former colleagues reported that he regularly used the N-word, referred to a Black male prosecutor as “boy,” and called the NAACP and ACLU “un-American.” He prosecuted civil rights activists for voting fraud. One of those civil rights activists recently said, “Sessions has not changed. Have you ever known a leopard to change his spots? I haven’t…. Sessions is still a racist.” And of course there’s his joke about how he liked the KKK until he found out they smoked marijuana. But no one is too racist for Donald Trump.

Yesterday, a nine-page letter written by Coretta Scott King opposing Sessions’s 1986 federal nomination was made public for the first time. “Mr. Sessions has used the awesome powers of his office in a shabby attempt to intimidate and frighten elderly Black voters. For this reprehensible conduct, he should not be rewarded with a federal judgeship,” she wrote. “I believe his confirmation would have a devastating effect on not only the judicial system in Alabama, but also on the progress we have made toward fulfilling my husband’s dream.” This letter was not even entered into the congressional record by then–Judiciary Committee Chair Strom Thurmond. Today, sitting Sen. Cory Booker and Reps. John Lewis and Cedric Richmond testified against the nomination of Sessions, making sure the Black community’s record of resistance against Sessions will not be further erased.

Sessions has voted against every immigration bill that created a pathway to citizenship since 1997, but yesterday, he wouldn’t say what should happen to the 800,000 dreamers who have applied for Deferred Action for Childhood Arrivals (DACA). Sessions was endorsed by Operation Rescue, an anti-choice group that has advocated for the execution of abortion providers, but yesterday, he wouldn’t disavow their endorsement of him. When asked about voter ID laws, freedom of the press, and more, Sessions answered again and again that he hasn’t studied that legislation—and then didn’t respond further. And yesterday, Sessions stood behind his statements that Roe v. Wade is “colossally erroneous” and violates the constitution.

While Democratic senators were trying to get to the truth of Sessions’s record (thank you, Sens. Al Franken and Richard Blumenthal!) and numerous protesters were led out of the hearing room (including one who laughed when Senator Richard Shelby said Sessions has a record of treating all people equally under the law), Session’s Republican colleagues pitched self-aggrandizing softball questions that revealed their foregone conclusion that their pal Jeff would soon be attorney general. Most of those questions went down like this:

REPUBLICAN: Senator Sessions, you and I worked together on legislation to address issue X in the past; how do you feel about issue X now?

SESSIONS: Issue X is very important and the work you’ve done to address it is working very well!

REPUBLICAN: Thank you. I look forward to working with you on issue X when you’re attorney general.

SESSIONS: I would be honored to work with you on that.

Sessions is not a flawless performer, and every once in a while, questions did seem to shake his disguise, if only slightly. When asked if he’d ever chanted “Lock her up,” Sessions quickly answered, “No, I did not,” and then a beat later, cheerfully added, “I don’t think!” Sessions either doesn’t know if he chanted “Lock her up” about Secretary Hillary Clinton, or he knows he did but doesn’t know if there’s proof. Good catch, Jeff.

This revisionist history-making was Sessions’s main defense yesterday. Senator Patrick Leahy asked Sessions about his opposition to the 2009 Matthew Shepard and James Bird Hate Crimes Prevention Act, which extended protections to LGBT individuals, women, and individuals with disabilities. “You said at a hearing that you’re not sure women or people of different sexual orientations face that kind of discrimination. And then you said, ‘I just don’t see it.’ Do you still believe that women and LGBT individuals do not face the kind of hate crimes that the hate crime legislation was passed to prevent?”

“Having discussed that issue at some length, that does not sound like something I said or intended to say,” Sessions replied.

Toward the end of a long day (the hearing went on for more than eight hours), a constituent from Sessions’s home state of Alabama called C-SPAN to talk about Sessions and his record; “He’s a wolf in sheep’s clothing,” she said. Later, she quoted Maya Angelou: When someone shows you who they are, believe them; the first time.