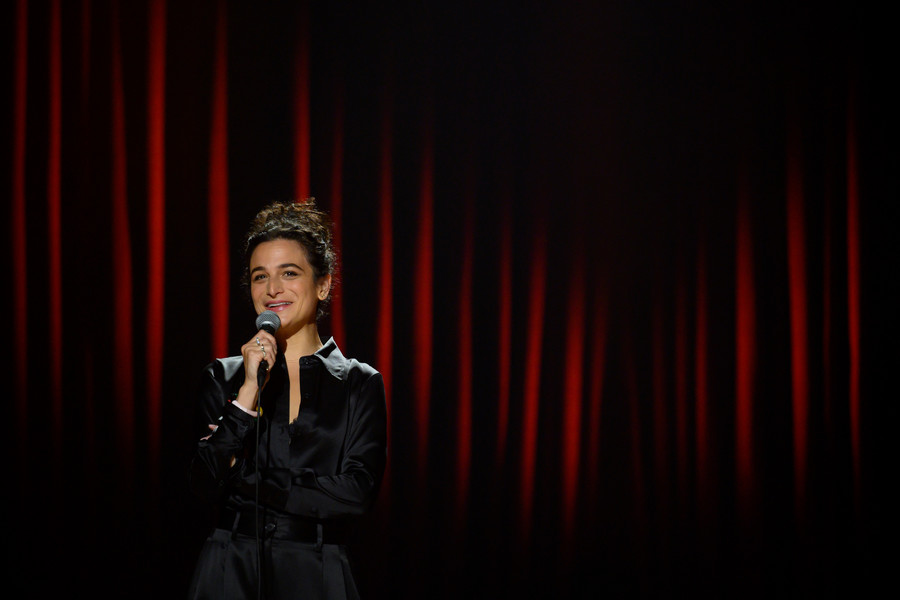 Within the first few minutes of her new Netflix special, Stage Fright, Jenny Slate looks into the audience: “Super sad that the patriarchy ruined the planet,” she says, her voice dropping. She’s clad in a black silky jumpsuit getup, a cross between my grandmother’s favorite nightgown and 1990s Julia Roberts. “That’s not how I wanted to start [the show], but that is how everything will end.” She laughs a smile that takes up her whole face, and the audience relaxes into their seats for what’s about to be an emotional, dark, hilarious, Jewish, self-aware, and intimate hourlong experience.

Stage Fright is not your average comedy special. Surpassing the expectations for Netflix’s extremely popular format, it ties together a stand-up performance at New York City’s Gramercy Theater with footage shot at her childhood home in Milton, Massachusetts. Interviews with her parents, siblings, and grandmothers are intercut with old home-movie footage, making the offstage parts of Stage Fright feel like a particularly well-composed Bat Mitzvah montage. Slate invites us into the most intimate parts of her life and, in turn, sets the model of what vulnerability looks and feels like as a stand-up comedian.

The special’s title is a reference to Slate’s own experience as a comedian with a condition that seems antithetical to comedy. As the camera rolls a few hours before she takes the stage at the Gramercy, she has tears in her eyes. “[I]t’s not fake humility,” she says. “I’ve tried to get hypnotized for it. It ruins my day, it fucks my body up, I get crazy diarrhea.” The terror of facing an audience is one that many of us can relate to; I quite literally shat myself waiting in the wings of a dance performance in middle school. And Stage Fright’s narrative arc is about the very human ways of overcoming fear, and not only of the stage and an audience that you don’t yet trust. This is about Slate’s fear of ghosts, of waking up her mother, of growing up, of herself, of men, of being alone. At its core, Stage Fright is a distillation of how we live with and confront fear, and the lifelong process—and joy—of overcoming it.

“My name is Jenny Slate, and if you’re looking at me from any angle, you will notice that I am a Jewish woman,” she opens. Self-aware, honest, and healthily self-deprecating, Slate reveals to us that as a young girl, she was very stuck-up in Jewish spaces about her resemblance to Anne Frank. On the surface it might seem odd to feel proud of looking like the most well-known victim of the Nazi regime in World War II, but Slate’s description of storming around with her head high because of her Anne Frank-ness is actually a poignant reflection of Jewish American comedy as a mode of expression for categorically—and sometimes painfully—Jewish experiences. And Stage Fright fits right into a history of Jewish women comics, from Fanny Brice to Gilda Radner to the fictional Midge Maisel, who revolted against the expectation of the “modest woman” through satirical, often sexually explicit comedy.

As American Jewish History Professor Joyce Antler writes in “The Gift of Jewish Women’s Comedy,” “What we learn from the tradition of Jewish female comedy is that laughter can critique and even disrupt the social order. Nothing was sacred to these Jewish women comics—everything could be mocked—but by and large they stood proudly within a Jewish tradition that offered comfort, familiarity, and guidance.” In a throughline that includes the likes of Sophie Tucker, Woody Allen, Jerry Seinfeld, Eric Andre, and Sarah Silverman, comedy has long been a space for the Jewish American voice that manifests from a history of Jewish discomfort, displacement, and diaspora, as well as a way to navigate the non-belonging of being pulled between two worlds—heightened particularly for Jews of color. Comedy became a way to both familiarize non-Jews with Jewish culture, quirks, and language, and to create a sense of belonging and solidarity within secular (and often liberal) Jewish communities.

Laughing at common—even derogatory—Jewish stereotypes, at our noses and our bubbes, at feeling superior because you look like Anne Frank, is part of what makes Stage Fright so pure. Slate is funny because of her blatant Jewishness, not in spite of it. The 37-year-old comedian is best known for her roles on TV shows like Parks and Recreation and Saturday Night Live; her voice acting in Big Mouth, Zootopia, and more; and the 2014 feature film Obvious Child, in which she plays Donna Stern, a young stand-up comedian who gets an abortion after a one-night stand results in pregnancy. The role was a revolutionary one, demystifying the standard healthcare procedure and facing the piercing flourescents in order for us to feel more comfortable with the actually-not-that-scary process of having an abortion in a state with relatively easy access.

Slate is jumpy and giggly onstage, possessing a personality that is “like, proing-doing, who cares, everybody poops in their pants,” which she attributes to being named “Jenny” instead of “Susan,” because Susan would walk into any room kicking down the door and never trips over her own feet. Even as she’s saying this, I get the feeling she has come to love being the Jenny type. One of the fears Slate addresses in Stage Fright involves literal ghosts. The house Slate grew up in was haunted. And not in a typically “spooky”way, with noisy floorboards and sinister gusts of wind. Hers was a Paranormal Activity kind of home, the “scariest fucking place in the world,” as Slate says. “The kind of house where my mom looks in the mirror and sees someone else’s face…[or] you walk out of the laundry room in the middle of the day and there’s a young boy in short pants with blood on his abdomen being like ‘Did I miss the picnic, Nanny? Have they served the ice cream?’”

Sitting with her father on a sofa, she tells him he disclosed too much about the ghosts to his children, instilling in Slate a constant fear of what translucent figure could be hiding around the corner of the stairs or creeping behind the kitchen counter. She sees her jumpy, Jenny-like personality as a result of that anxiety, wondering, “What would I be like if I grew up in a house without ghosts?” What she’s also asking is: “Who would I be if I wasn’t plagued by fear?” The trip to Milton offers a look at teenage Jenny Slate—anxious, awkward, unbearably horny—as well. She rifles through a box in her old bedroom that’s full of things that made her angry.  “I’m so pissed about bullshit as a young woman,” she says, shuffling through pieces of paper: names of boys, anxieties about the future, frustrations at school and with friends.

Her memories of the time seem not unlike what Missy, her nerdy, overalled Big Mouth character, might experience. She notes that “ripe pits and a huge bush” propelled her into the icky flesh of puberty, where she discovered she got turned on by everything—and then discovered that women’s sexuality is silenced from the start. Like Missy, Slate tears open this taboo, pointing out that all young people can experience uncomfortable sexual desire for strange things when their bodies begin to change. Stage Fright makes clear that these excruciating parts of adolescent life didn’t evaporate for Slate, but instead morphed.

Stage Fright fits right into a history of Jewish women comics, from Fanny Brice to Gilda Radner to the fictional Midge Maisel, who revolted against the expectation of the “modest woman” through satirical, often sexually explicit comedy.

Slate’s trip back to her childhood home isn’t, as it turns out, just a visit. She recently got divorced, and has since moved back into her old room with the Angry Box and the walls sticky with remnants of tape that once held up posters of Leonardo DiCaprio. She’s candid about the difficulties of separating from a long-term partner, moving back to her parents’ home, and beginning to date again right as the #MeToo movement kicked off in 2017. She, like so many of us, is scared. This time not of ghosts, but of the violence so often inflicted upon women by powerful men, or any man for that matter. She describes getting angry and defensive at even a simple offering because there is always a lingering feeling of unease, even when they are nice—What are you gonna to do me? What have you done to other women? How can you possibly be good when so many of you are bad?—are entwined with equally relatable jokes about freaking out after going on a date with a new guy who is nice. The anxiety of living in a body we know can be exploited, the feeling of constant alertness to danger, is yet another fear confronted.

The pressure to have “everything figured out” is especially harsh for women—just ask Emma Watson, whose recent one-off statement that, at almost 30, she was a “self-partnered” woman nearly exploded the internet and became the focus of an interview in which her partnership status was, and I can’t stress this enough, of minimal importance. Slate says that moving back to her parents house was her lowest point. One night, she jokes, she was lying in her childhood bed, full of fear about the future and alert to social judgment; she turned her head to the side, ready to “pass away,” and she saw the moon, full and juicy. Instead of dying in her parent’s house, she took out her vibrator, “electrocuted her clit,” and kept on living. She literally over-came.

In contrast to the theme of fear, however, is joy: We watch Slate twirl around her Nana Connie’s tidy closet, trying on a pink dress with wing sleeves while her grandmother watches admiringly; we see footage from a long-ago family Hanukkah, the evening prayers seldom heard on TV echoing through a fuzzy camera. These moments of tenderness are a reminder that even amidst the chaos of today, there is joy, and thus power, in the ones you love, in your moments of faith or embarrassment, in your community, in your sexuality. There are too many reasons women, and in this case Jewish women, have been indefinitely fearful of this structured world that is so often unkind to and dangerous for us. Slate demonstrates how small victories found in the seemingly trivial occurrences helps push herself from one day to the next.

“Goodnight, friends,” she says, leaving the stage; as the credits roll, we watch her dance around her home to the actual sound of a record playing jukebox in the corner, curls springing out of her lazy attempt at a bun that I know too well. “Friends” actually feels like an accurate description of what we have become over the last hour. Though it’s obviously done for the camera, this post-show dancing moment captures the essence of Slate’s special: To be a raw, vulnerable Jewish woman is still hard—but is also still worth it.

Read this Next: Laughing Through Pain