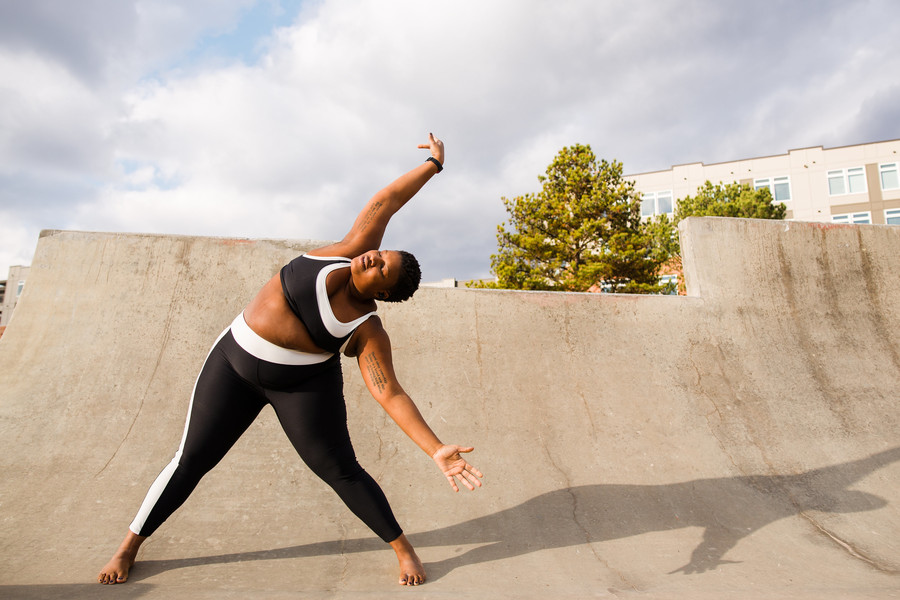 Wellness is an industry: Like designer brands or imported cars, wellness™ has a market exemplified by the Peloton ad that was endlessly critiqued this winter, and the likes of the entirety of Goop: Its ideal consumer is thin, female, white, rich, and seeking social validation through culturally approved signifiers of wealth and health. This limited ideal audience only becomes further narrowed by geographical factors. In plain speak: As an industry, by prioritizing the aforementioned bodies, wellness deprioritizes Black people’s bodies, especially big Black people’s bodies; and while racial hostility is undeniably present across the country, this toxicity is uniquely concentrated in the American South.

From the rapid expansion of Goop to the continued twisting of radical self-care language for profit, wellness as a brand is about acquisition, status, and performance. Perhaps that suits its audience of well-to-do women with seemingly nary a care in the world, who flit from engagement to engagement in a haze of kombucha and oat milk. But my life is that of a Black woman, specifically a big Black woman, who lives in the South, and according to the industry I don’t exist. None of us exist. And yet, we are not alone. Despite our lack of presence in wellness-oriented ads (with the rare exception), and how little we’re seen as the audience of wellness products and the wellness lifestyle, we’re here. All across the South, Black women of all shapes and sizes are unfurling their yoga mats, taking a cleansing breath in, and exhaling a calm, centered fuck that shit.

Research on the benefits of yoga, and other mindfulness practices like meditation, is incontrovertible. Its health benefits include reducing stress, lowering blood pressure, and ameliorating chronic pain. These benefits show no significant variation in impact across gender, racial or socioeconomic lines—and yet public perception is that yoga, meditation, and similar practices are exclusively the domain of thin, white, affluent women (despite these practices not originating from white women). In a 2017 study out of Loyola University, African American women were asked to identify barriers that prevented them from exploring yoga and mindfulness of yoga and mindfulness, and top of the list were access to convenient classes and the existence of such classes and opportunities within the African American community.

Jessamyn Stanley—a proponent of yoga for all bodies—is one of the main women challenging the whiteness and thinness of wellness culture by helping to redefine the narrative around Black bodies, fat bodies, and bodies of all kinds with her radically inclusive yoga practice. The Durham, North Carolina-based instructor has amassed a following of nearly 400,000 on Instagram and has a wildly successful virtual yoga studio called The Underbelly, where women get free and take charge of their bodies. “The whole purpose,” she tells Bitch, “is to connect to your divinity. I am celestial. I am something so much bigger.” And that connection to the celestial is exactly what Southern women of color are seeking. If you’re thinking North Carolina seems like an odd place for a full-figured queer Black woman espousing the benefits of yoga and mindfulness to set up shop, you’re not alone. “I don’t really feel that connected to the yoga community here,” Stanley explains. “[It’s] wealth centered and very white.”

The surge in Black women taking to wellness is a response to the ever present racial tension and strain of being a Black woman in predominantly isolating and othering white spaces.

Too, the publications that seek to delve into the benefits of yoga and mindfulness, like LA Yoga, Yoga Journal, and Yoga magazine, act as gatekeepers. In a 2019 article for Women of Color Healing Retreats, Nadine Olu writes, “Publications don’t represent Black women, because in a capitalistic society, their target audience is white people. This form of systemic oppression erases the healing of Black people, which then affects the entire Black community.” It’s not enough that the physical spaces themselves are exclusive; the stories and narratives around who practices mindfulness are, too. “When Black women are represented in white publications about yoga, it becomes a spectacle, almost as if the publication wants an award for finally seeing Black women,” writes Olu. “Black women are tired of being docile and underrepresented.”

When Black women push against this oppression with their literal bodies and chose to take to mindfulness spaces, they face intense backlash. This winter, between uproar over the plus-size workout gear on the plus-size Nike mannequin, Little Mix’s Leigh Anne-Pinnock body positive swimsuit campaign, Rihanna’s Savage X Fenty inclusive lingerie line, and Lizzo’s assed-out twerk and Instagram photos, the discourse around body positivity, wellness, and Blackness exploded. The fact that Lizzo’s body positivity is seen as an indiscretion by conservatives, speaks to a society where big, Black bodies are explicitly regulated. Like Stanley, who also frequently poses nude on her social media account, Lizzo makes statements about who is allowed to be free, well, and in a state of self-acceptance. In May, we gain Nicole Byer’s Fat Girl’s Guide to Being #Brave and Not a Dejected, Melancholy, Down-in-the-Dumps Weeping Fat Girl in a Bikini, which will further expand this discourse surrounding Black women’s bodies and what they are and aren’t “allowed” to do.

Ownership, sensuality, mental and physical wellness are all linked concepts, and they are intentionally positioned as beyond the scope of our existence. The negative commentary surrounding Black women’s bodies, especially when these bodies aren’t thin, hearkens back to who is allowed to access true nirvana within oneself and who isn’t. It’s disappointing that a practice that originated from people of color would be twisted into gatekeeping people of color. “Right now, in the wellness industry, who is allowed to be well?” Stanley asks. “If we only see one kind of person [as] ‘well’ or ‘healthy,’ anyone who doesn’t fall into that category, isn’t allowed to feel that way. Representation opens the doorway; [it] creates a space for people to understand that your physical body is not standing in the way. Wellness looks different for everyone. If you can see more versions of what wellness looks like, you can enjoy wellness right now.”

But what happens when you turn to spaces that are supposed to be built for healing, only to find yourself an outsider? Downward dog is vulnerable enough without feeling like everyone in the room is judging you. Stanley’s advice is to find a different space. “Yoga is a solitary practice. You don’t need to be so tuned in to a local community. Studio culture is so intense that it becomes negative.” She continues by suggesting, “If you are of the belief that you need to find a community outside of your home, then you underestimate the power within [you]. The biggest tip for solidifying a practice—solo practices that can be done without any other human beings.”

For so many women of color that migrate to the South for better opportunities, cheaper living, and connection to history, slower pace and tranquility seem like an easy path. But, instead, some of us find isolation, othering, and exclusion. As Octavia Raheem, Atlanta-based practitioner and owner of Sacred Chill West + O+M, says, “Yoga reveals.” In spaces where so many women of color are seeking answers, validation, and agency, that revelation is key to healing; for so many that find themselves singled out and the “only” in majority white spaces, the need for community is ever present. Many seek a physical space to commune with others and find solidarity. From 2014 to 2019, more than 20 Black yoga practitioners encouraged Black femmes not only to get active, but also to find inner peace and stillness. But the 3 to 5.6 percent surge in Black women involved in wellness and a regular practice is a response to the ever present racial tension and strain of being a Black woman in predominantly isolating and othering white spaces.

The longing for solidarity that Stanley highlights is indicative of how deep the pain of exclusion goes, and how necessary a wellness revolution is. The more Black women and femmes gravitate toward wellness practices, the more diverse collections of wellness and meditative offerings pop up in Southern cities and create competition with the more exclusive studios. The number of Black yoga studios has almost doubled in states like North Carolina, but the need for more than just classes and meditating remains. D.C.-based instructor Brandon Copeland’s Trap Yoga classes work to dispel the myth of the yoga “lifestyle”: The expensive yoga pants, limiting diets and veganism, natural products, and pricey memberships. That lifestyle is inaccessible for folks of color and marginalized individuals.

“The way the practice has aided me, when it’s not fetishizing and exoticizing me, keeping me down, that’s where the healing begins,” Stanley. Stanley’s private at-home practice encourages us to move past and avoid the white supremacist, heteronormative spaces that oppress us. “It’s important to be reminded we have access [to] something bigger than the self, [bigger] than what the media shows us,” she says. It can be difficult to find wellness spaces owned by Black women, but digital spaces often provide what brick and mortar spaces don’t. Sites like Black Girl In Om, started in 2014 by Lauren Ash, are doing the work to create inclusive spaces that center around Black healing, no matter what your body looks like or where you fall on the gender/sexuality spectrum. We have the capacity to take ownership of our own healing, and Stanley agrees that the web is a great place to start. “In an age of terror and chaos,” she says. “it is imperative that we retreat into practice.” A practice that should be free—and one that should be open to all.

Read this Next: In Yoga, Carving Out Safe Spaces for Women of Color 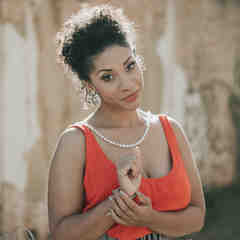 Khalisa Rae is a native of North Carolina and is a graduate of the Queens University MFA program. Her recent work has been seen in Glass Poetry, Brave Voices, Hellebore,  Honey & Lime, Tishman Review, the Obsidian, Anchor Magazine, New Shoots Anthology, Red Press, Roses Lit, among others. She was a finalist in the Furious Flower Gwendolyn Brooks Poetry Prize and a winner of the Fem Lit Magazine Contest, White Stag Publishing Contest. She is a poetry staff editor for Kissing Dynamite and Carve Magazine. Her forthcoming collection, Ghost in a Black Girls Throat is forthcoming from Red Hen Press in 2021. She is also the newest writer for B*tch Media and Out/Body Magazine.