Dolezal 2.0The Audacity of Cosplaying as Black 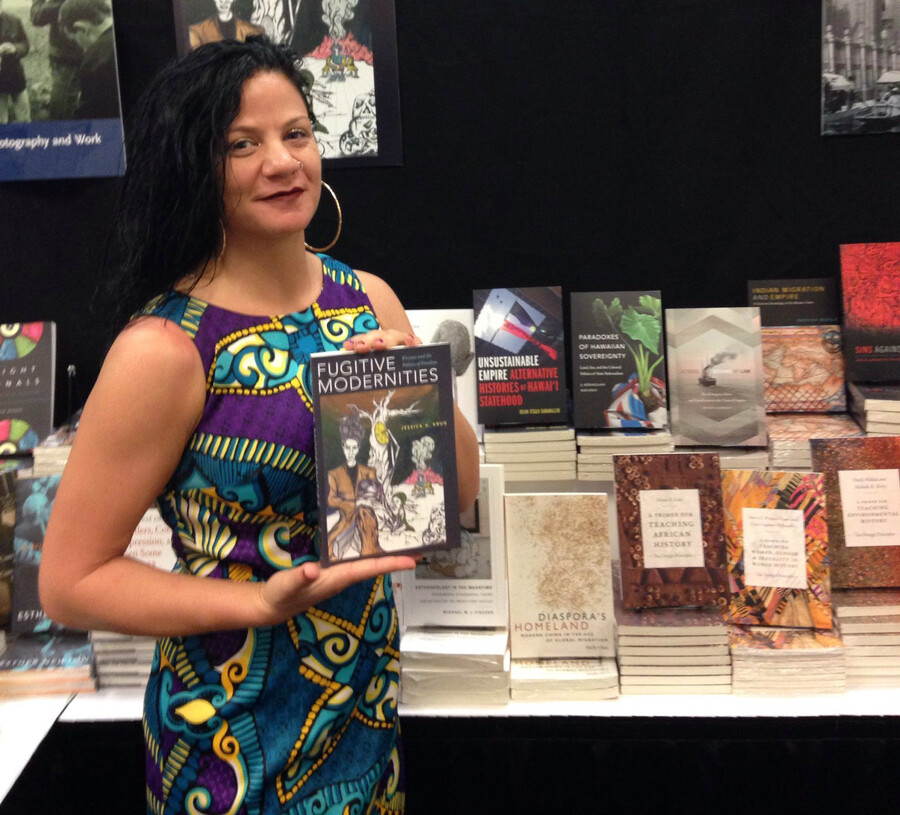 Jessica A. Krug, an associate professor of history at George Washington University, recently revealed that she is a white woman pretending to be Afro Latinx. (Photo credit: Twitter/DukeUPress)

Jessica A. Krug, a tenured history professor at George Washington University with a specialty in “politics, ideas, and cultural practices in Africa and the African Diaspora,” has been pretending to be an Afro Latinx woman for years. But we’ve learned this week that she’s actually a white woman. This isn’t beyond the norm, as a plethora of white professors are embedded in Black and African American studies departments across universities. Though it’s undoubtedly weird—and arguably a scourge on the discipline itself—that there are still students learning Black studies from white professors, it’s an experience so standard that there’s even an offshoot, critical whiteness studies, in which scholars of all ethnic backgrounds research white supremacy itself. While white professors teaching Black studies might be concerning for some, a white professor pretending to be an Afro Latinx woman—with all of the complexities that encompasses—is just downright strange, almost as if it’s a twisted subplot on HBO’s Lovecraft Country.

But that’s the upside down we’ve been in since Krug confessed in a September 3 Medium post that she’d built her entire career on a lie. “To an escalating degree over my adult life, I have eschewed my lived experience as a white Jewish child in suburban Kansas City under various assumed identities within a Blackness that I had no right to claim: first North African Blackness, then U.S.-rooted Blackness, then Caribbean-rooted Bronx Blackness,” she wrote. “People have fought together with me and have fought for me, and my continued appropriation of a Black Caribbean identity is not only, in the starkest terms, wrong—unethical, immoral, anti-Black, colonial—but it means that every step I’ve taken has gaslighted those whom I love.” Krug continued, musing about how she believes childhood trauma paired with mental health issues likely contributed to her decision to create and adopt a long-term alter ego, apply to be a Ronald E. McNair scholar at Portland State University, and help lead research in a field that we now know she has no lived connection to.

“That I claimed belonging with living people and ancestors to whom and for whom my being is always a threat at best and a death sentence at worst,” she wrote. “I am not a culture vulture. I am a culture leech.” Krug, who adopted the moniker Jess La Bombera, wasn’t only satisfied with becoming a tenured professor, publishing a book through a major academic trade press, and being regarded as an expert in African American studies. She also had to become a gatekeeper of Blackness—a moral pillar who determined who was working on behalf of Black people and who needed to be held accountable for not doing enough. “She consistently trashed women of color and questioned their scholarship,” political anthropologist Yarimar Bonilla, who teaches at Hunter College and the Graduate Center at the City University of New York, tweeted. “She even described my colleague Marisa Fuentes as a ‘slave catcher’ in the introduction to her book. Kind of amazing how white supremacy means she even thought she was better at being a person of color than we were.”

Everything about Krug’s behavior—from her defensiveness and the calculated theft of opportunities from actual Black scholars to her inherent feeling of superiority—screams of whiteness. Her near immediate pivoting to victimhood—everything is in my control, but nothing is—also echoes the whiteness that has allowed white people to colonize lands and then claim to be oppressed within the very nations they pillaged. And through it all, Krug was able to maintain this façade because there’s an unspoken rule that proclaiming Blackness makes it so. Though some Black people questioned if she was in fact Black—as some have shared on social media following her reveal—to question any Black person’s claim to Blackness is to reinforce white supremacy and destabilize the Black American project, wherein we’re connected through the trans-atlantic slave trade and have a shared culture born from that lineage-shifting trauma. To question any person’s claim to Blackness—even if said person has lighter-skin—is to police their identity and question their lineage, calling the very project itself into question.

If you say you’re Black and there appears to be even a modicum of legitimacy to that claim, then you’re Black, and Black people will defend your right to Blackness even to other Black people who suspect your claim is dubious. That’s how these deceptions are born and how they thrive, flying in the face of all other evidence. There’s a long history of white people passing as light-skinned Black people in the 19th century, as journalist Rachel L. Swarns details in a 2015 article for the New York Times. “White men and women driven by love, ambition or other circumstances sometimes leapt across the racial chasm, defying state laws and social conventions designed to keep blacks and whites apart,” Swarns wrote, before detailing a number of different white people, including James Todd, Reverend Louis Fenwick, and Carrie Plant, who were “part-time Black” in order to escape persecution for being in interracial relationships or living in predominantly Black communities.

“Ironically, state laws designed to indelibly label people of African ancestry helped to make this kind of passing possible,” Swarns notes. “The laws defined racial identity by blood, not appearance.” Krug might be a beneficiary of this history, but she’s living it out at the expense of Black people, many of whom face an uphill battle in academia. Colorism—a system that privileges lighter-skinned people and other features that signify a proximity to whiteness at the expense of darker-skinned people—becomes a useful weapon for white women who choose to cosplay as Black. Gatekeepers trust light-skinned people to be stewards of their own stories and of Blackness at-large, leaving little room for those darker than them to question their right to Blackness. These conversations devolve quickly from rightful questioning to being perceived as untrusting and envious. White women who’ve studied Blackness enough to emulate it know this and manipulate it—using colorism, through its impact on darker-skinned people, to shield themselves from legitimate inquiry.

Everything about Jessica Krug’s behavior—from her defensiveness and the calculated theft of opportunities from actual Black scholars to her inherent feeling of superiority—screams of whiteness.

When white women, including Rachel Dolezal, adopt Blackness—donning it as an identity and a costume—there’s always an adopting of the trauma, but never of the triumph. It’s a joy to be Black, but somehow these women only connect to the most pathologized parts of the experience: having drug-addicted parents, being bombarded with hate mail, being passed over for opportunities. They insist on using Blackness to excuse their individual failures. “In my Afro Latinx history class, Jessica Krug discussed dynamics of white scholars engaged in Black studies,” Lena Haime, a student at George Washington University tweeted. “She really had the audacity [to] pull up an image of the white woman who won an award over her, illustrating how black scholars are often overlooked in the academy.” For Krug, it was being passed over for academic appointments and awards; for Dolezal, it was being allegedly harassed and sent death threats for working within a local NAACP chapter—none of which has been actually proven.

By leaning into the marginalization baked into the Black experience, particularly in the United States, these women have been able to shield themselves from legitimate criticism. Krug’s continued reference to her mental health also allows her to deflect criticism, a common experience that we’ve seen other people lean on to excuse their harmful behaviors. Mental disorders are difficult to navigate, but racism isn’t a symptom of mental illness; it’s simply racism. Despite these myriad excuses, we know how this ends because we’ve witnessed its conclusion before. In some circles, Krug will be demonized, as she should be, and she will become somewhat of a social pariah. She’ll likely lose her tenured professorship and her allies within academia and outside of it who made that possible. And then, she’ll miraculously see some illusion of the light: Isn’t it possible that she’s just transracial? And if she’s simply changing races, shouldn’t be allowed to take control of her story?

Pretty soon, Kruger will be on the morning show circuit, which she will leverage into a book deal and a documentary—raking in money from the deception itself. It sounds like the best version of being “canceled,” as she declared herself in her Medium post. As Krug rebrands herself—this time as a white woman victimized by a system that racializes people—what becomes of the people she’s harmed? Are they suddenly collateral damage in her quest to declare her right to be Black until it no longer suits her? There are people whose trust she gained, who defended her, and who bought into her lie. How can Krug atone in any meaningful way without recentering herself? She can’t, and she also won’t simply go away because the audacity of whiteness won’t allow her ego to do that either. The burden can only be carried insofar as it benefitted her, and when it became too heavy, finally weighing on her moral center or career goals, it became easy to shed the very Blackness she once cloaked herself in as a form of repelling armor. That, to be clear, is the whitest part of it all.

Read this Next: Black Women Can Barely Make the News, But Rachel Dolezal Gets National Media 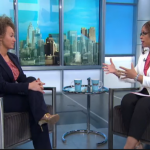 by Evette Dionne
Melissa Harris-Perry and Rachel Dolezal talking on MSNBC this Tuesday. It is impossible to escape the media storm around the...