A Square Peg at the Roundtable | Bitch Media 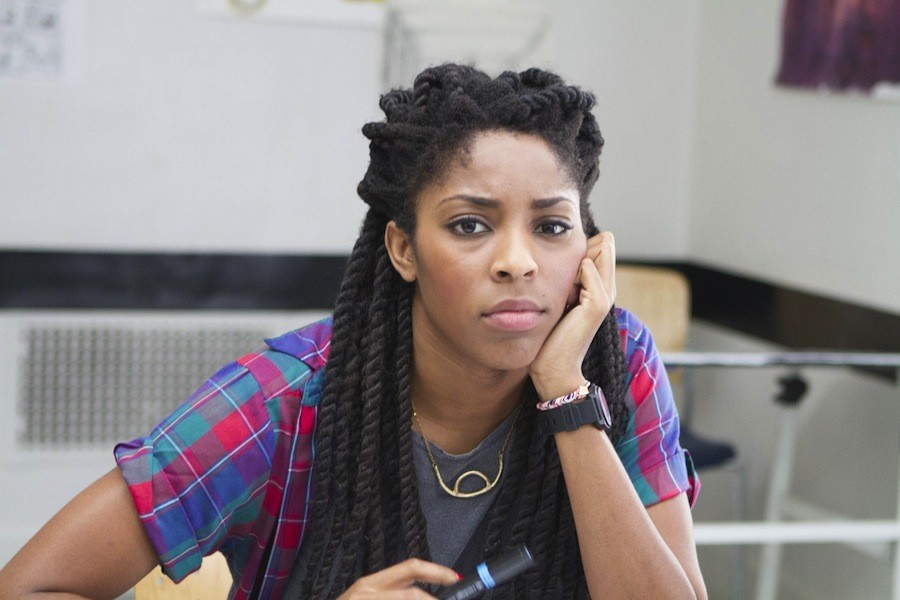 There are some experiences that non-Black, non-LGBTQ women of color—even the ones who identify as feminists—just don’t understand. This fact became excruciatingly apparent at a recent elite Hollywood dinner during Sundance when a Black woman, once again, had to remind her peers what radical feminism actually looks like.

During a fancy dinner featuring a predominantly white, all-women cadre of producers, directors, and entertainers, comedian, former Daily Show correspondent, and all-around dope Black girl Jessica Williams spoke up for racially and sexually diverse women to Salma Hayek and Shirley MacLaine. The conversation was described as a “heated debate” by the Los Angeles Times and many, many other organizations that covered the ordeal took a similar tone. These kinds of descriptions minimize the tensions that Black women, trans, cis, queer, and heterosexual, often face with more privileged women when discussing the uniquely gendered and racialized experiences they encounter in public spaces.

According to the L.A. Times, the conversation stemmed from Hayek’s and MacLaine’s warnings not to become victims of the Trump administration.

“I don’t want to be hired because I’m a girl,” Hayek said after comparing the upcoming political environment to war. “I want them to see I’m fabulous. Don’t give me a job because I’m a girl. It’s condescending.”

In an effort to open up the discussion for women at the table who shared multiple marginalized identities across race, gender, and sex, Williams then suggested that Black and LGBTQ women have a different set of burdens to bear.

“My question is: What if you are a person of color, or a transgender person who—just from how you look—you already are in a conflict?” Williams asked.

Both Hayek and MacLaine responded by suggesting that Williams look “inside” to figure out who she is without being Black or woman. This, they suggested, was the answer to her question.

In response, Williams stood her ground and asserted that the “victim” label is patronizing and ignores her experiences.

“I also feel like the word ‘victim’—I feel like it has bothered me,” Williams replied to Hayek and MacLaine. “When I talk about feminism, sometimes I feel like being a Black woman is cast aside. I always feel like I’m warring with my womanhood and wanting the world to be better, and with my Blackness—which is the opposite of whiteness.”

At this point, several of the women at the table attempted to mediate the conversation, but when Williams explained again that women of color (namely Black women) and queer women face further marginalization, Hayek became condescending and dismissive.

“Baby, I’m Mexican and Arab. I’m from another generation, baby, when this was not even a possibility,” Hayek said. “My generation, they said, ‘Go back to Mexico. You’ll never be anything other than a maid in this country.’ By the head​s ​of studios! There was no movement,” she continued. “Latino women were not even anywhere near where you guys are. I was the first one. I’m 50 years old. So I understand.”

To which Williams responded quietly, “You don’t understand.”

It isn’t lost on me that Jessica Williams, a young Black woman who has long used her platform to advocate for queer rights and the visibility of Black women in entertainment, was the person at the table willing to bring this up. Black women are frequently and unfairly made to be the voices of reason in liberal, predominantly white spaces, a role shaped both by our experiential knowledge from moving through the heteropatriarchal world and by the relative privilege many white women have in feminist praxis.

The fact is: Williams is right. Hayek doesn’t understand. Her responses are an example of non-Black women of color de-centering the concerns and experiences of women who are more marginalized than them. They begin to display the same isolationist politics they seek to dismantle.

Even as a woman of color who has had a long and successful career in Hollywood, Hayek doesn’t understand Williams’s (and many other Black women’s) experiences with misogynoir, a term that describes the specific ways racist and sexist oppression combine to harm Black women. Likewise, she doesn’t understand that when those women are also trans, their life expectancies, access to state-based or private medical care, and chances of living their lives without constant threat of criminalization and hyper-surveillance are severely diminished.

These consequences of systemic racism and state-sanctioned patriarchy have actual effects on these women. This holds true even for women who are famous or well-respected in their fields. So, “becoming a victim” isn’t really a choice.

To subsume Williams’s calls for recognition of the uniquely gendered and racialized circumstances facing Black and queer women is an act of erasure. Terms like “victim” have long been used against Black women to delegitimize these women’s calls for redress and justice. This erasure cloaks the impacts of patriarchy and misogynoir by implying that Black women somehow choose to obsess over harm against them. And the implications are vast, since Black women’s actual victimization often goes unrecognized on a mass scale.

For Hayek and MacLaine to use this language further proves Williams’s core point that if we, as women, are to work together on gender justice, we must be clear on the fact that gender does not work in singularity. Not only that, but any form of solidarity politics that asks Black women—trans or cis, queer or straight— to draw their personhood from only parts of themselves is not solidarity at all.

Many Black women find themselves in this unwanted position, forced to say “No, actually…” in a room full of non-Black or non-queer feminists whose positionality both protects and prevents them from understanding the oppressive conditions facing people who don’t look or love like them.

Sadly, the increased visibility of “popular” feminists is only making that worse and points to what feminist scholar Joy James terms “cultural feminism.” This type of feminism is popular because it doesn’t require systemic or institutional change. It doesn’t even dislodge many of the existing structures that affect Black and queer women. Instead, cultural feminists work within the status quo, seeing men as the inherent threat to women’s rights and parity rather than interrogating the systemic problems that affect different women in various ways.

This mainstreamed version of feminism (sometimes called “white feminism”) is helmed by women like Lena Dunham and Amy Schumer, both of whom have vociferously called for parity with white men but who continue to ignore the concerns of racial minorities and the work Black women are already doing to ensure justice for all marginalized people.

This is the hypocrisy of cultural feminism: It simultaneously benefits from Black women’s intellectual and emotional labor while asking those very Black women to whitewash their political concerns in the name of solidarity.

But it’s more than “white feminism.” Rapper M.I.A. is a woman of color who has skated over critical importance of the Black Lives Matter movement in the United States and used her platform to criticize Beyonce’s Black Power–inspired Super Bowl performance last year.

Even after missing Bey’s iconic performance, M.I.A. believed she didn’t miss anything, telling the Evening Standard, “It’s interesting that in America the problem you’re allowed to talk about is Black Lives Matter. It’s not a new thing to me—it’s what Lauryn Hill was saying in the 1990s, or Public Enemy in the 1980s,” she said. “Is Beyoncé or Kendrick Lamar going to say Muslim Lives Matter? Or Syrian Lives Matter? Or this kid in Pakistan matters? That’s a more interesting question.”

It’s only a more interesting question if you don’t see the historical significance of Black people, especially Black women, being centered in issues of social justice and racial redress.

Far too often, when Black women speak up on the specific ways that feminism must be expanded to center those most marginalized, it is the cultural feminists, like Hayek and MacLaine, who push back, seeking colorblind solutions and minimizing the unique circumstances facing Black and queer women.

In their critique of Williams’s personal commitment to being simultaneously woman and Black, Hayek and MacLaine were missing the precise goal of feminist work: to ensure all women are treated like actual, complete people. Not parts of people, but whole people.

Whole people who are women and whose gender, sex, and race have equal influence on their social and political lives. They are women who know that the erasure of parts of their identities means necessary and self-inflicted unfreedom. These women know that asking anyone to acknowledge only a fraction of her experiences with oppression in the name of solidarity is working backwards.

By speaking up, Williams was attempting to save these women from their own ignorance to the intersections of race and sexuality. Williams sought to push these women’s feminist knowledge toward a more just place, a place where race, gender, and sexuality aren’t in conflict but instead are critical in the work we do to secure women’s rights on a global scale.

That Black women continue to be thrust into these positions as unwilling teachers cast in unwanted teachable moments proves that we have much further to go to ensure that our feminism includes us all.