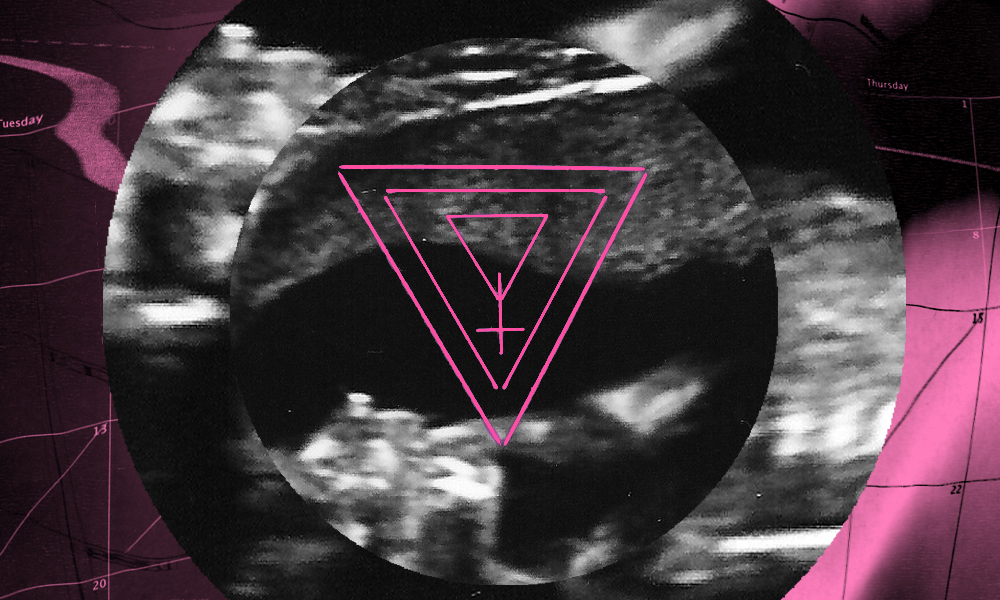 When Mary Doe went to an abortion clinic in St. Louis in 2015, she came with a letter explaining that, as an adherent to the principles of the Satanic Temple, her religious beliefs include body inviolability and making health decisions based on the best scientific understanding, and that it was against her religious beliefs to be forced to abide by Missouri’s restrictive abortion laws. Despite her religious objection, Doe was forced to wait the state-mandated 72 hours before receiving abortion care. The Satanic Temple has filed both state and federal lawsuits against Missouri on behalf of Doe, arguing that Missouri’s restrictive abortion law violate Doe’s right to free exercise of religion, and the lawsuits have been ongoing since.

In Missouri, abortion clinics are required to offer patients seeking abortion care the opportunity to hear a fetal heartbeat. Because an ultrasound is the only means to hear a fetal heartbeat at an early stage of pregnancy, abortion clinics in Missouri had been interpreting this mandate to mean that an ultrasound was required for every patient seeking abortion care. Earlier this month during oral arguments, Missouri’s Solicitor General D. John Sauer told the court that ultrasounds are not legally required prerequisites for receiving an abortion; instead the person seeking an abortion must only be asked if they would like to hear the fetal heartbeat.

What’s the potential impact of the solicitor general’s statement that ultrasounds don’t have to be conducted unless the patient wants to hear the fetal heartbeat?

What the solicitor general clarified is that women can be sitting in an office prior to their examination and be asked if they would like to to hear the fetal heartbeat, and if they say no and they also decline the ultrasound, then in theory the ultrasound never has to happen to begin with and women won’t have to be on an examination table being forced to answer that question, which can be very difficult, especially in a vulnerable position. It frees up clinics to change the way that they undergo the process with women and provide a little more dignity to the experience in that they can make medical decisions about whether or not an ultrasound is required rather than a political decision.

Has anything changed in terms of how clinics in Missouri are operating since the solicitor general’s statement?

Understandably, the clinics are really uncomfortable with talking to activists or the press because they’re really just trying to get their job done. There are only three clinics in Missouri—there used to be only be one. I did call and ask them if they believed, or if their interpretation was, that the ultrasounds are mandatory right before we made this announcement, and they all confirmed that was their belief. One of the justices brought up the fact that—given the contentious relationship between the state and these clinics—they would understandably do everything in their power to meet these guidelines or risk being shut down.

What’s next in the case?

Right now we are waiting to hear back from the Missouri Supreme Court, and we don’t know when that’s going to happen. It could be any day now, it could be months from now, and once we do hear back, it’s going to be bumped back down to a lower court if the Supreme Court says that our case has merit or standing…and then we’re going to be able to argue our case on the merit. Up until now the state has been arguing that we don’t even have a case, that we don’t have a legitimate constitutional claim, therefore we can’t even move forward with our arguments.

Are there other states that the Satanic Temple is looking into for legislative action to protect reproductive rights?

In theory, the exemption form that Mary Doe used to request to be exempted from the mandated waiting period and receiving informed consent materials can be used in any state. The only hang-up that we have in terms of pursuing that is legal fees. What we’re doing in Missouri is not pro bono. We’re not receiving pro-bono legal help, so it’s very expensive, and I think that that’s actually a really interesting problem for us to have. It means that organizations like ours, or independent women who feel isolated or like these laws impose some form of harm upon them, really don’t have the resources or the means to challenge these laws, and that’s hugely problematic. Otherwise we could probably get a lot more done in terms of overturning or challenging a lot of this unjust legislation. It really comes down to resources.

Last time we spoke, you mentioned that the Satanic Temple might be looking into fetal burial laws in Texas. Is that still on the horizon for potential legal action?

Our argument is that requiring fetal internment or burial of any kind is the enforcement of religious ceremony. It’s not a secular thing. The disposal of fetal tissue is medical, but the requirement for it to be considered a burial and paid for as such is the imposition of religious opinion. It’s certainly something we’re considering, but it comes down to, again, access to resources and support from the legal community.

What’s the best way for someone who wants to support the Satanic Temple’s work on reproductive rights to get involved?

They can visit religiousreproductiverights.com. There’s a way to donate money and there are also things for sale and all of that helps support our legal funds. 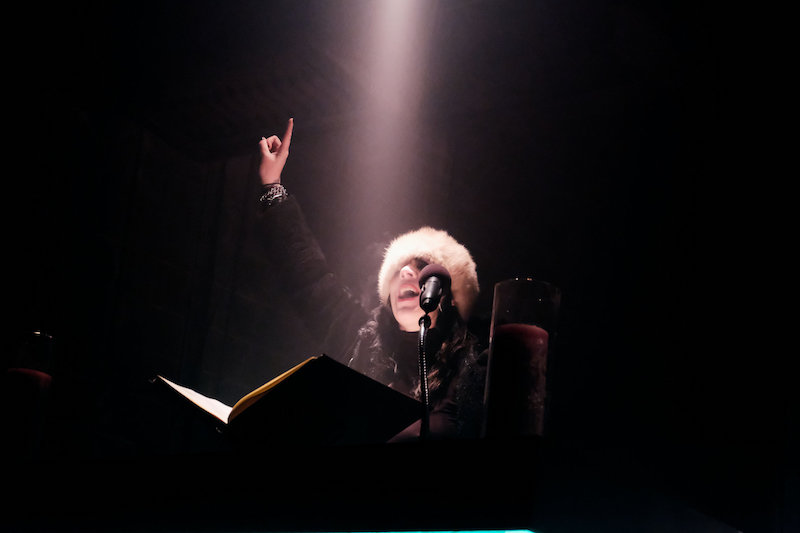 I’m always so struck by the way that your work blends art and activism. Can you tell me about the ritual you recently performed? What spurred it, and what did you want to accomplish through it?

I’ve been performing Satanic rituals, or participating in rituals, long before I joined the Satanic Temple. In the last few years, I have created rituals with the Satanic Temple as a way to support our community and bring people together. What I’ve seen as a result of that is people reaching out saying, “We have some type of injustice or theocratic mandate in my city, or my town or my school, and we’d like someone to come and perform a Satanic ritual to please help.” I think that as the Satanic Temple has grown, what we’ve seen is people are falling into the trap of relying on the institution of the Satanic Temple to do the work for them. I think that’s a dangerous trap because we are all, for the most part, capable of organizing and disrupting and finding ways of communicating with our community about these injustices with or without the support of an organization such as the Satanic Temple. I really wanted to do a ritual performance that brings people together not under the banner of the Satanic Temple and creates an environment and an experience that empowers people to go out into the world and to take action, organize, and innovate in their own forms of protest and resistance.

One reason why I use ritual is that it’s been an enduring element of the human experience since basically the beginning of written human history or prior to that. It’s an incredibly powerful tool as a way of transferring power to people and also communicating to a larger society that we interact with. In this case, we really wanted to reinvent and reimagine the aesthetics of a Satanic ritual in a way that’s contemporary and design driven as a way to tease out the aesthetic qualities that people are attracted to when it comes to messaging and also use visual elements that are evocative of representations of oppression.

I believe that performance art is incredibly powerful at communicating to groups of people where the written word often falls short. Theater has been used for hundreds of years as a form of communication and critique, and ultimately, I would love to do these kinds of performances in places like the South, where the theocratic mandates have particular power and feel particularly oppressive to people.

What projects are you working on next?

In addition to performance, I’m editing a film that I worked on last year about a woman’s experience in waiting for an abortion, and that’s an installation piece that hopefully we’ll have some locations for that to be shown within the next few months. The goal is for the film to be in public spaces where people have to confront the reality of the burden of mandated waiting periods and how unethical and ineffective they are, in the context where they are going about their daily life and experiencing what a woman experiences in a sense. Editing a 24-hour film has been quite an experience, so the next step and probably my main focus is to find the right venues and spaces that are willing to host the film.

Since Trump’s election, I’ve noticed so many people feel called to activism and not just activism, but creative protest and creative action. I wonder if you’re seeing the same thing in terms of energy within the Satanic Temple and what you make of what feels like a tremendous desire to creatively disrupt oppressive policies.

The people that I’ve been working with and my own work has been taking a creative approach to activism before Trump, even before the election cycle began. I do feel like there was a little bit of disinterest or a lack of urgency that I was stressing at the time, and that has certainly reversed. We essentially have a regime that’s promoting theocratic policies and other forms of injustice that was looming over us for quite some time, and we got too comfortable and unwilling to address it.

There are people who are really interested in being involved and engaged. We’ve seen an influx of protest and other forms of action, and I think ultimately it is going to require people to take that energy and passion and then really focus. n any kind of creative political action the question needs to be: What’s the goal? And that’s something that we’ve been bad at defining and creating actions [around]. If we start thinking more goal-oriented and very specific and working our way back to say: What’s the most effective means of getting an issue on the front-page of the newspaper so that we talk about it, or forcing a politician to respond to an unjust policy that they supported or getting somebody fired who is behaving unethically? These are all pretty obtainable goals, but they do require us to think creatively, especially when you’re a group of people who have very little power or access to resources. I do start to see that shift in people considering the ways that they can impact change most effectively given the circumstances. I think it’s both on the rise and requires a little bit more work and fine-tuning from our community.

This interview has been edited and condensed for clarity