Photo of Halliday by DA Photography

Years ago, Joe Kelly noticed a Maidenform ad reading “Inner beauty only goes so far” on the side of a city bus, and was hor­­ri­fied to imagine one of his young daughters as the subject of it. As one of the founders, with wife Nancy Gruver, of New Moon: The Maga­zine for Girls and Their Dreams, an award-winning, youth-edited publication, Kelly was well aware that the relationships between girls and their fathers hold an importance that’s too often dismissed or overlooked. With other fathers in mind, he ­founded (and is currently the president of) Dads & Daughters, a national nonprofit devoted to forging stronger, healthier relationships between fathers and daughters and to combating the cultural and media messages that are destructive to girls’ ­self-esteem and autonomy. He is also the author of the 2002 book Dads & Daughters: How to Inspire, Understand, and Support Your Daughter When She’s Growing Up So Fast.

Ayun Halliday took a loopier route to parenting guruhood as the irrepressible creator of long-running kidcentric ­chronicle The East Village Inky and author of the childrearing memoir The Big Rumpus: A Mother’s Tale from the Trenches. Given that her parenting career is still in the training-pants, tooth-fairy, and why-is-Barbie-so-bad? stage, she seemed like the perfect person to bend this dad’s ear.

Ayun Halliday: Knowing that much of Dads & Daughters’ activism is centered around talking back to advertisers about their messages to girls, I’m interested in knowing what sort of ads you find most objectionable these days, and why. Do you pick your battles, or is your writing hand about to fall off?

Joe Kelly: Sadly, we find tons of marketing efforts objectionable, and our members send us many more examples we don’t see directly on our own. We do pick our battles, trying to judge which ones we have the best chances of winning—especially given our unusual platform of being (mostly) fathers speaking to (mostly) other fathers—the ceos—and asking them to put their daughters’ faces in the picture. We do it this way for two reasons: One, we like winning, and two, winning shows other people that their voices can count, and that the individual measures they take on their own can also bring change.

In addition to helping carry out the girl editors’ bidding at New Moon, you delved into music, literature, television, and film aimed at teen girls so that you’d have a nuanced awareness of what your daughters were into, as well as a place of authority from which to criticize it should the need arise. Did you find you liked any of it on its own merits, not just because it put forth a positive message or role model?

Gosh, yes. However, it’s important to understand that our daughters had somewhat unusual tastes in media during their youth. For example, the media they were most passionate about during their early adolescence were the books of Jane Austen. They discovered her on their own. And they loved listening to classical music—most likely a result of their being avid ballet students for many years.

Was there anything that just grated on your last nerve? Was there a slang expression you’d have stricken from the lexicon if you were king (and your daughters didn’t factor into the equation)?

“Slut.” It sticks in my craw because of its meanness and because it is, in the real world of kids, a word against which you can’t defend yourself once it is hurled. Plus, it’s a glaring example of the double standard regarding the sexual behavior of boys vs. girls. I haven’t heard it applied as good-natured teasing or as a reclaiming of the word (à la “bitch”), but that may very well be the function of my age and gender.

A friend of mine enjoys going to the movies with her 14-year-old son. He usually picks what they’ll see, and even if Mother thought the film was terrible, she tries to accentuate the positive when discussing it with him, in the hope that he’ll continue to welcome her on these outings. The whole family has a keen sense of social responsibility, so nobody holds back on pointing out sexist or racist portrayals or situations. Where do you stand on muzzling your aesthetic objections?

What we tried (and succeeded, I think) to do with our daughters was just to discuss. Sometimes the topic of discussion came around to sexist portrayals, sometimes aesthetic reactions/opinions—usually a wide range of all of the above. I don’t think it’s necessary or terribly organic to try and divvy up all the subject areas. Just bring your own sensitivity/aesthetic to the discussion, and listen to your child’s opinions as respectfully as you want her to listen to yours.

Your daughters are now in their 20s. Are there challenges you didn’t expect in being the father of adult women?

The challenge I didn’t expect was how caught up I still get in how they are feeling about themselves. In some odd, unconscious, and completely unrealistic way, I wanted some part of my parenting to be “over,” because it’s hard work and emotionally taxing. Recently I realized how silly that expectation was, and have pulled it out of the closet and, I hope, thrown it out the window.

I should mention a phenomenon that many involved fathers experience but few discuss: We truly grieve losing our central place in our daughters’ lives. So, as a daughter, when you feel like Dad (who encouraged you to be independent and take risks in the past) is in hovering/smothering mode, you might consider whether he’s grieving—and perhaps even suggest that you two talk about it openly together. It often relieves a lot of the tension that can build up during that time of life. Our website has tips for adult daughters on improving their relationships with their dads.

Are there other topics on which you feel ready to pass the torch to the father of a 10-year-old girl?

I don’t see this as an either-me-or-them, pass-the-torch question. Many younger fathers are more willing than fathers of my generation to talk openly about all of their fathering experiences. Meanwhile, I have the honor of hearing many powerful fathering stories from men of all ages, and having a platform from which to share them with others. Sure, it’s been more than two decades since breastfeeding was an issue with my own kids, but there are still things I’m learning about how it affects a father’s/stepfather’s parenting—and I learn this from fathers and step­fathers of all ages.

To learn more about Joe Kelly’s work with Dads & Daughters, visit http://www.dadsanddaughters.org. Ayun Halliday’s books, including the brand-new Job Hopper: The Checkered Career of a Down-Market Dilettante, can be found at fine independent bookstores, or at http://www.ayunhalliday.com.

This article was published in Masculinity Issue #28 | Spring 2005 Subscribe » 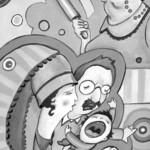