All Victims Can Be Perpetrators 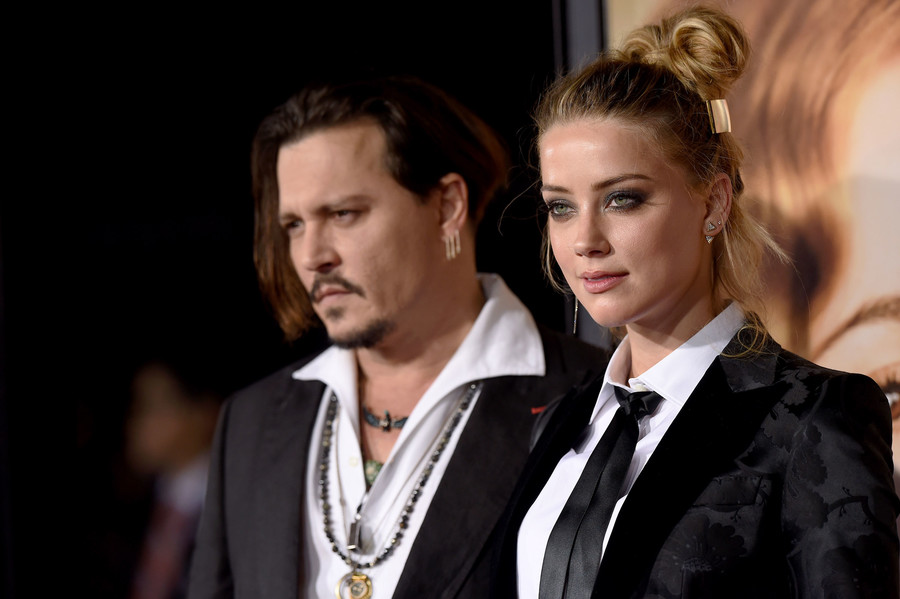 Johnny Depp, left, and Amber Heard arrive at the premiere of The Danish Girl on November 21, 2015 in Westwood, California. (Photo credit: Axelle/Bauer-Griffin/FilmMagic/Getty Images)

In a 2015 audio recording recently obtained by The Daily Mail, Amber Heard allegedly admits to physically abusing her then-husband Johnny Depp. In 2016, Heard filed for divorce from Depp and claimed he’d physically assaulted her multiple times throughout their 18-month marriage. That same year, after Heard wrote a Washington Post op-ed about purposely being outspoken about domestic abuse, Depp filed a $50 million dollar defamation lawsuit against her that claimed, in part, that she was the abuser in their relationship. (Heard had previously filed more than 300 pages of documents detailing Depp’s pattern of abuse in their relationship.)

In the leaked recording, however, Depp seemingly admits that each inflicted physical abuse on the other. “I left last night. Honestly, I swear to you, because I just couldn’t take the idea of more physicality, more physical abuse on each other,” Depp says. “Because had we continued it, it would have gotten fucking bad. And baby, I told you this once. I’m scared to death, we are a fucking crime scene right now.” Elsewhere in the recording, Depp admits to pushing Heard; Heard also confirms that she hit Depp, but insists it was a “slap” instead of a “punch,” which Depp vehemently denies. Heard also warns Depp, “I can’t promise you I won’t get physical again. God I fucking sometimes get so mad I lose it.”

The recording also includes a passing reference to Depp losing the tip of his finger in Australia one month into their marriage. Depp claimed that Heard “went berserk” when he asked her to sign a prenup, throwing a vodka bottle at him, which shattered on a marble countertop and ripped off the tip of his finger. However, in the same recording, Heard says that Depp cut off his own finger during an argument because he was “drunk and high on ecstasy.” While there is no video evidence of either Heard or Depp’s claims, in 2016, TMZ leaked a video of Depp smashing bottles and screaming obscenities at Heard.

To onlookers, the whole thing might seem like a whirlwind of conflicting accusations; people seem compelled to take sides that are informed by their own perspectives and biases, discrediting one narrative completely in favor of the other. But it’s critical to resist that societal instinct to minimize, demonize, or disregard either of these accounts. Each of us knows someone who has been directly impacted by sexual or domestic violence. When we give into the urge to see abuse as a binary—one abuser, one victim— we make our communities, our families, and our loved ones less safe. We send the message that we won’t listen to their stories, empathize with their pain, and meet their needs. In this way, Depp and Heard’s case can help us examine the ways we cling to myths of “the perfect victim” and “the typical abuser” to the detriment of all abuse survivors. By accepting that perpetrators of abuse are often victims as well, we can better understand and address the dynamics of interpersonal violence.

After the Daily Mail published the recording, some Twitter users began circulating the hashtag #JusticeForJohnnyDepp to bring much-needed attention to the fact that men can be victims of intimate-partner violence (IPV), though it’s rarely recognized. They’re right: According to the Centers for Disease Control and Prevention, about one in three men experience sexual violence, physical violence, and/or stalking by an intimate partner during their lifetime. A 2011 study in the Journal of Forensic and Legal Medicine found that among 535 cases of male victims of IPV, about 64 percent were married to female perpetrators. This isn’t an issue that affects only cishet men, either: According to a review published in 2015 by the Williams Institute, 26.9 percent of gay men will experience IPV in their lifetimes. And research published in 2010 by Scotland’s LGBT Domestic Abuse Project showed horrifying levels of domestic abuse against transgender people, with 73 percent reporting they had experienced transphobic emotional abuse from a partner.

Stigma prevents many male survivors of domestic abuse from coming forward because they think they won’t be believed or that people will assume they “did something to deserve it.” Hitting, kicking, punching, or emotionally and verbally abusing men is generally considered a lesser offense if it’s retaliation for something generally considered scumbag behavior, such as cheating. There’s a huge difference between defending yourself and instigating violence, but when it comes to male survivors we often can’t recognize the line between them. Unfortunately, shortly after #JusticeForJohnnyDepp began trending, it was quickly infiltrated by people using it to brand Heard a “sociopath” and a liar, expressing their conviction that the audio was definitive proof that Depp had not abused her.

Others attempted to use the Depp-Heard example to proclaim that the #MeToo movement is ineffective and morally bankrupt, full of liars and opportunists. As Roslyn Talusan wrote in a recent article for Wear Your Voice, “#JusticeForJohnnyDepp was a misinformation campaign designed to provoke intense reactions and guilt people into supporting him at the expense of Heard.” The audio does reveal Depp to likely be a victim of domestic violence, but that in no way negates Heard’s claim that her ex-husband abused her. The evidence is overwhelming, and ignoring this is willful ignorance. Heard’s lawyer, Roberta Kaplan, expressed as much in a statement to USA Today. “It’s a myth to say, as Mr. Depp apparently is implying, that if Ms. Heard slapped him, then she can’t also be a victim. That is just not true.”

Believing survivors requires us all to hold space for both Heard and Depp, listening to and supporting them both while holding them both accountable. And as Talusan points out, it also means being mindful of all the dynamics, like the “power imbalance within a relationship—for example, the one between a beloved 52-year old cishet male actor and his 29-year old bisexual wife.” In a culture that often seems incapable of nuance, there’s a persistent need to see victims and perpetrators through an unrealistically narrow lens before acknowledging the harm itself. Cisgender women are held to an impossible standard in cases of domestic violence and rape, tasked with proving their own lifelong perfection before the violation of their bodies or spirits can be accepted as valid. (Though transgender women, especially BIPOC transgender women, are held to the same standard as cisgender women in rape and assault cases, they’re almost never seen as “perfect victims” because our society sees their identities as inherently contradictory to any conceptualization of victimhood.)

The questions and charges are all too familiar: Why was she wearing that dress? She smiled at him, he probably thought he liked her. She was flirting with other guys, of course he screamed at her. How much was she drinking? Why did she go there alone? They were married, what was he supposed to think? She takes antidepressants, so she’s a crazy liar who invents things in her mind. Normal human fallibilities and behaviors are wielded against survivors even within their own families and friend circles, at their jobs, and in the courts—if they ever decide to press charges. And though by now most of us recognize that it’s a cruel farce to put a survivor through intense interrogations and attempts to defame their character, it can be difficult to maintain that same perspective when these same victims (again, many of whom are cisgender women) are revealed to be perpetrators as well.

Acknowledging duality and complexity requires us to admit that we, too, might be capable of inflicting abuse on others—and to recognize that we may have already done so.

Our society has not yet accepted that women can inflict horrible wounds and still be horribly wounded themselves. What’s more, after the #MeToo movement exposed the predation of many powerful men, many gleefully take these opportunities to discredit anti-rape and anti-domestic violence movements to their benefit. In 2017, Asia Argento bravely came forward about Harvey Weinstein sexually assaulting her, subsequently becoming a critical voice in the fight against sexual assault. But in 2018, Jimmy Bennett, a former child actor and musician, accused Argento of sexually assaulting him when he was 17 and she was 37. Argento had allegedly paid Bennett $380,000 to buy his silence, an act reminiscent of Weinstein’s own use of settlements and ironclad non-disclosure agreements to silence his victims. In the wake of this revelation, many people struggled to react in a way that felt empathetic to Argento as both a perpetrator and a survivor.

My own coworkers at a sexual-assault prevention nonprofit were conflicted about what kind of statement to release; we all believed Bennett, but even as trained professionals some of us lacked the right words to describe how Argento could simultaneously be a survivor, a member of the #MeToo movement, and an abuser. On and offline, some chose to staunchly defend Argento against the accusations or, alternately, used Bennett’s account of assault to support their belief that #MeToo was a witch hunt led by women lying about their own assaults. Why is it so difficult for so many people to understand that victim and perpetrator are not mutually exclusive categories? Part of it is that our society—including law-enforcement institutions—still clings to an archetype of the perpetrator as a cisgender man who uses physical force to overpower cisgender-women victims. There’s still a hesitation around the notion that perpetrators can any gender and can attack any gender—though trans and nonbinary people experience IPV and sexual violence at higher rates. We still can’t believe that most abusers know their victims, often intimately, or that abusers can be bubbly, kind, successful, and beautiful.

Acknowledging duality and complexity requires us to admit that we, too, might be capable of inflicting abuse on others—and to recognize that we may have already done so. In a 2018 Daily Beast article titled “Asia Argento Blows Up the Myth of the ‘Perfect Victim,’” Danielle Tcholakian writes, “Every time a complication presents itself, you see who hates the #MeToo movement on some level. They pour out of the woodwork, declaring the movement has finally gone too far, or is dead, or both. They don a cloak of neutrality, the protection of the spectator, as opposed to a participant. It was inevitable, they say.” When such complications arise—and they will—advocates for survivors of domestic violence and rape shouldn’t default to defensiveness or confusion, but should instead acknowledge the essential truth at the heart of this movement: We must support survivors and work toward creating a world where violence is eradicated. Cases like Argento’s and Heard’s are co-opted in bad faith in order to shut down conversations about how to create that world, but we can use these cases to reignite, broaden, and deepen such discourse. Acknowledging how complex these issues are doesn’t negate the amazing work of the #MeToo movement; it only continues it.

Read this Next: Chris Brown, Johnny Depp, and the Politics of Ex Abuse