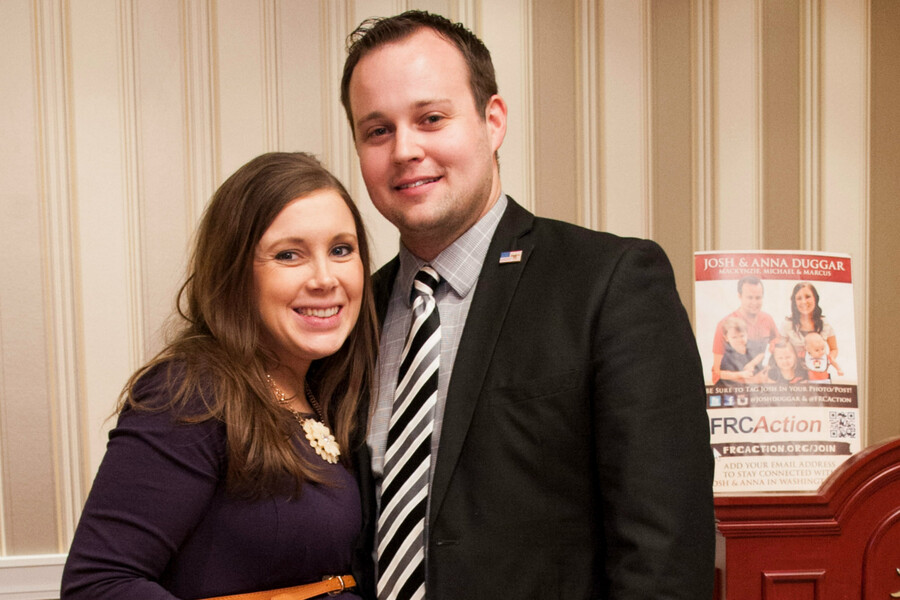 The world is once again rubbernecking the Quiverfull community because of the Duggar family, and I, for one, am tired. Sensational for the notion that people should have as many kids as possible as a way to honor God’s will, the Quiverfull community is a blip in the constellation of religious movements in the United States that have used their teachings and practices to enable and protect abusers. Having grown up in the Quiverfull world, I was excited when I left, hopeful of finding an outside world that brought child molesters to justice and abusers to accountability. My naive hope was not rewarded.

People in positions of authority in every community system protect abusers to maintain the status quo and consolidate power, so the Christian fundamentalists and Quiverfull communities of my youth are cesspools of abuse, no more or less than those uncovered in sports, academia, and the film industry in recent years. However, the Quiverfull community has much more psychological power over its victims because it carefully uses its theological teachings to weave together the ideas of personal worth and submission to authority. In fact, the belief that suffering is part of God’s plan for your spiritual development and personal sanctification is what sets my community of origin apart. If that suffering happens at the hands of those you love and trust, it’s treated as an opportunity to practice Christlike forgiveness rather than as a betrayal.

In 2014, Bill Gothard resigned from the Institutes in Basic Life Principles (IBLP), an organization he founded in 1961, after an internal investigation revealed he’d been accused of sexually harassing and abusing young women for decades. The IBLP became popular among the emerging Christian homeschool movement (born from the Jesus Movement) in the late ’60s and early ’70s, a time when young Christians began divesting from established denominations because they didn’t consider those institutions serious enough about the Bible and faith, and amid the desegregation of Southern private schools in the wake of the Brown v. Board of Education decision. White fundamentalists, interested in isolating their children from worldly influences—code for non-Christians, people of color, and most popular media—flooded IBLP seminars and camps centered around learning how to live according to “biblical” principles.

All these teachings were generated and taught by Gothard, a minister (and single man with no close immediate family) cut from the same Wheaton College cloth that produced evangelist Billy Graham, missionary Nate Saint, and evangelical writer Josh McDowell. IBLP’s “Basic” seminar, Gothard’s most popular course, taught seven principles for living, among them the idea that suffering at the hands of those you love is an opportunity for personal growth and character building. He also developed the Advanced Training Institute (ATI), a homeschool curriculum and accompanying conference and seminar circuit, in 1984, one year before ex-feminist writer Mary Pride’s seminal book The Way Home: Beyond Feminism, Back to Reality—which argued that Christian women who used birth control and pursued careers stunted themselves spiritually by not fulfilling their God-given calling as wives and mothers—unofficially founded the Quiverfull movement. The Way Home and ATI materials went hand in hand, showing up on homeschooling Christian families’ bookshelves across the country.

Enter Jim Bob Duggar, who married Michelle Ruark in 1984 and raised 19 children in the Quiverfull tradition. I’m the child of Jesus Movement converts who wanted to have a big Quiverfull family. They married in the ’80s and homeschooled me and my eight siblings, using ATI materials and similar curricula to teach us object lessons about diligence, patience, and self-control. Gothard’s seminars also became the foundation for the purity-culture movement of the late ’90s and early aughts, when fundamentalist homeschool poster child Josh Harris took the lessons he’d absorbed about the dangers of dating and repackaged them into his bestselling 1997 book, I Kissed Dating Goodbye, and its 2000 sequel, Boy Meets Girl: Say Hello to Courtship. The second book promoted parent-supervised, community-focused courtship as the ideal alternative to dating, a rough reflection of the relationship model practiced by the Duggar family and forced upon thousands of homeschooled teens. Harris eventually recanted, pulling his book from store shelves in 2019—but by then, it had sold more than 1 million copies.

This deep-cut history is essential to understand why Quiverfull escapees, myself included, have mixed feelings in response to the news that Josh Duggar has been charged with possession of child sexual abuse (CSA) materials: sadness over the familiarity of the story, fatigue at the likelihood that nothing will improve for the children he harmed, and empathetic panic for his wife, Anna. She and Josh are victims of an abusive system that facilitated his own reviling actions, and the story that will unfold in the years to come won’t be unique to other Quiverfull escapees. Josh’s pedophilic actions are unforgivable and horrific, but I want to emphasize that this situation is extremely preventable.

In my ex-Quiverfull community, I’d be hard-pressed to find an adult escapee who wasn’t themselves a victim of child abuse, be it sexual, physical, or verbal. In fact, we were raised believing that children are born bad, with active and willfully sinful natures that require beatings (i.e., spankings) in order for them to be trained up in the ways of godliness. This feeds into the aforementioned belief that suffering leads to holiness. Every suffering is a trial—a test of your faith, obedience to God’s will, and willingness to humble yourself before him—to admit wrongdoing, perform grief over your sins, and dedicate yourself to doing better. Because the salvific act of Jesus’s death is taught as leveling the playing field of transgressive acts and considered sufficient for saving both the worst sinners and the least sinful, your sinful act of, say, back talking your mother isn’t perceived as worse than the sin of molesting a child.

That’s the reason you can find ATI worksheets such as these: 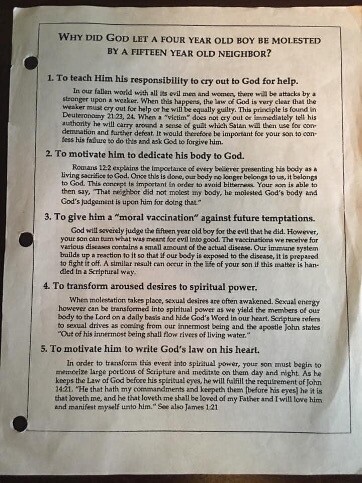 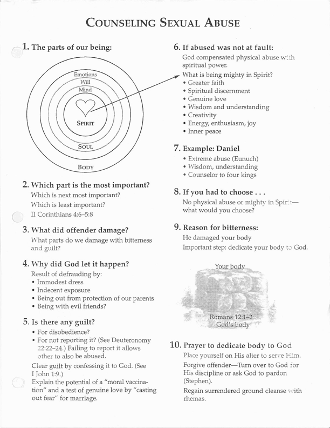 In these worksheets, the focus isn’t on the harmfulness of the abuser’s acts or reassuring the victim that the fault doesn’t lie with them; instead, the victim is taught to produce greater spiritual devotion and moral character through their reactions to the abuse. Rather than enforce boundaries to protect them, leaders often force victims of sexual abuse in churches and communities— many of which are similar to those the Duggars grew up in—to forgive their abuser in a mediated setting. (Author’s note: This blog post explains how the church group I grew up in handled abuse allegations.) To refuse to forgive a predator is to harbor bitterness. To refuse the forgiveness you have been taught God has already extended the abuser is to put your emotional satisfaction above God’s judgment of how sin should be handled.

No matter what happens to Josh Duggar, it won’t be enough to bring real healing to the victims of Quiverfull-enabled child sexual abuse.

Anna Duggar in particular is in an impossible situation. She’s been conditioned to believe her role in life is to raise her children (she and Josh have six, with another on the way) and provide her husband with spiritual, emotional, and practical helper and support to her husband. She can hinder his spiritual development if she’s not sexually available enough, submissive enough, [fill in the blank] enough. Wives in my church were routinely told to make themselves “more available” to their husbands when seeking counseling for abuse or infidelity at the hands of their spouses. Suffering unto holiness—silence, submission, and loyalty—are codes Quiverfull women live by. This overlooks the practical elements of belonging to a community that teaches that debt is sinful, that the husband’s name should be on all financial matters, that sending your children to school abdicates your responsibilities as a Christian parent, and that leaving your abusive husband is akin to turning your back on your church community.

Anna’s story is just one of many narratives of being married to an abusive man without recourse; Josh is receiving obscene levels of attention only because of his reality TV background. Their children are among the thousands of homeschooled kids who don’t have regular interactions with mandatory reporters and are being raised in a system that prioritizes tidying up messes quietly and not disturbing established power structures over the rights of children to grow up in families and communities where they will not be hit or preyed upon. The personal responsibility of everyone in the families, the church, and the wider community to refrain from enabling abusers such as Gothard and Duggar is not lost on me, but the process of extracting oneself from that world is tedious and heartbreaking, requiring an initial acknowledgement that the people you love treated you badly and that you have the right to refuse such treatment without abandoning them or God.

If I was able to get out and rebuild my ethical worldview and sense of self post-Quiverfull, why can’t Anna? I didn’t have seven children, and I was willing to lose everything to walk away. However, it’s hard for Quiverfull escapees and CSA survivors to feel any sense of relief that the law is ostensibly holding Josh accountable, not until children’s rights are taken seriously in the United States, homeschooled children are treated as worthy of protection, and women like Anna are able to access safe systems for help fleeing high-control groups. One predator is arrested and released back to his family on bail. Will his children be safe from him as he awaits trial? When will the predators who molested countless others in these communities be held to account? I cannot say, but no matter what happens to Josh Duggar, it won’t be enough to bring real healing to the victims of Quiverfull-enabled CSA.

Read this Next: Coming Out Doesn’t Excuse Colton Underwood’s Abusive Past 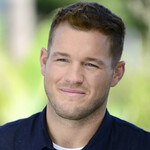 by Gabriela Ramos Tavárez
Accepting this narrative is a disservice to queer folk who are or were closeted and have never abused their partners in the process of finding themselves. 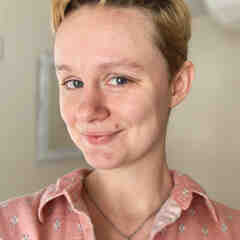 Eve Ettinger is a writer, editor, and educator in southwest Virginia. They are a nonfiction features editor at The Rumpus. Their writing has appeared in the Washington Post, Allure, Autostraddle, The Establishment, Cracked.com, and Cosmopolitan. They have discussed homeschooling reform with outlets like NPR’s All Things Considered, the BBC, and more. You can listen to their podcast, Kitchen Table Cult, which they co-host with Kieryn Darkwater, and follow them on Twitter. They are working on a memoir.