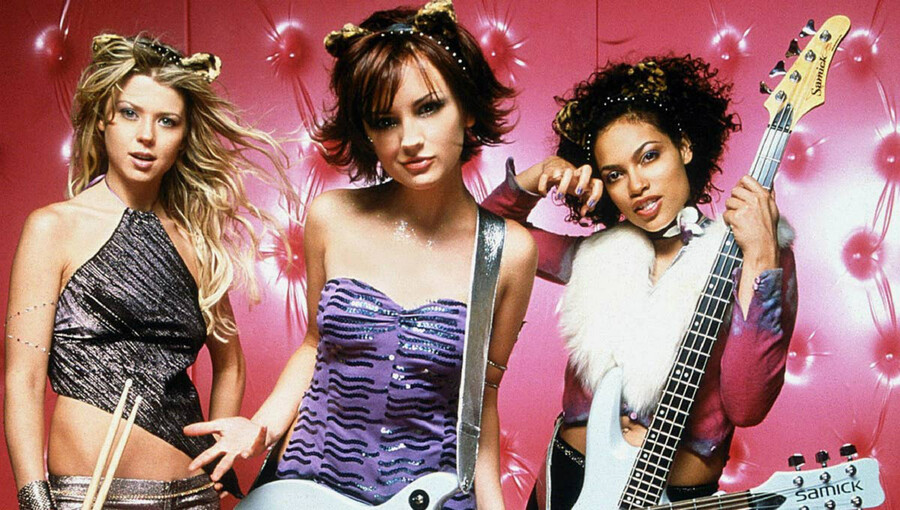 Long before the CW dove into strangely sexy teen soaps, the town of Riverdale was home to Josie and the Pussycats, a cinematic ode to the Archie Comics/Hanna-Barbera cartoon. Featuring singer-guitarist Josie McCoy (Rachael Leigh Cook), drummer Melody Valentine (Tara Reid), and bassist Valerie Brown (Rosario Dawson), the 2001 film depicts an all-girl rock group’s rapid rise to fame. The plot is fantastical; the script is high camp; the set design is excessive; the music is catchy; and the casting is strong. Yet, compared with other girl-power flicks that roared at the box office around that time (Legally Blonde, Charlie’s Angels, The Princess Diaries), Josie and the Pussycats only managed a tepid mew, bringing in a little more than $14 million domestically, far less than its overall production budget. But there’s a prophetic vision folded into the film’s absurdity that’s wildly in sync with our present moment. Josie and the Pussycats is a film that, in satirizing history, became a precursor to our future.

The story is a simple one: Following the sudden plane crash of the world’s most famous boy band, DuJour, a record-label exec named Wyatt Frame (Alan Cumming) chances upon the Pussycats and promises them stardom. Whisked away to NYC, the band meets with MegaRecords CEO Fiona (Parker Posey), who—unbeknownst to them—is conspiring with the U.S. government to hide subliminal messages in pop music. The goal? Brainwash listeners into shopping. Any musicians who discover this diabolical scheme will suffer a fate similar to DuJour: “Ever wonder why so many rock stars die in plane crashes?” “Overdose on drugs!” “We’ve been doing this a long time,” Fiona and Wyatt say to each other at a world government summit.

Does the U.S. government’s investment in brainwashing seem ridiculous at the turn of the 21st century? Sure, but perhaps less so considering that CIA operatives once laced unwitting subjects with LSD in search of the perfect mind-control technique at the cusp of the Cold War. Or considering the highly illegal Counterintelligence Programs known as COINTELPRO that the FBI ran from the ’50s through the ’70s to discredit and destabilize domestic political groups, including feminist organizations, communist parties, antiwar advocates, environmentalists, and the Black Liberation Movement (most recently depicted in Judas and the Black Messiah). In this way, Josie and the Pussycats could be considered a timely forecast to the resurgence of government surveillance programs in a post-9/11 world. Ushered in by the Bush administration, the National Security Administration’s (NSA) terrorist surveillance program granted the state the power to secretly track billions of phone calls by its citizens.

In 2013, this program was replaced by PRISM, which gave both the NSA and FBI unadulterated access to audio and video chats, photos, emails, and documents of most internet-accessing citizens. The U.S. government has never stopped weaponizing deceit in the pursuit of citizen surveillance. But the victims in our story aren’t political agents, radical freedom fighters, or suspected terrorists—they’re fallible teenagers with highly disposable incomes. With consumption as its destination, pop music becomes the vehicle, and the film perfectly satirizes the ’90s, an era marked by economic prosperity, deregulation, and “a consumption extravaganza.” It was the decade that waved goodbye to the Parents Music Resource Center (PMRC), a committee founded in 1985 and spearheaded largely by Tipper Gore, which pushed various regulatory agendas around the marketing and sale of popular music, citing that these products were tempting children into violence, sex, and drugs. The moral panic cried censorship and produced a playlist named the “Filthy 15” with songs they found most objectionable. Contenders included Prince, Madonna, Cyndi Lauper, and Judas Priest.

While Gore and the PMRC spent the ’80s warning against the evils of music, the ’90s packaged musicians as products of politics, selling hollowed ideas of empowerment without the messiness of organizing and collective action. “A hat tip to both power and empowerment that became a hallmark of ’90s-era marketing to women, girl power was a direct product of feminist media and pop culture,” writes Bitch cofounder Andi Zeisler in her 2016 book, We Were Feminists Once: From Riot Grrrl to CoverGirl®, the Buying and Selling of a Political Movement, analyzing what she describes as marketplace feminism. When referencing the explosive popularity of the Spice Girls, Zeisler notes the group marked a departure from the radical roots of the feminist movement. “There were no sharp edges here, no anger, and no analysis—why would there be? The Spice Girls could have been any singing group that was signed and sold,” she writes. The ’90s embrace of girl power was, as Zeisler concludes, “centered on empowerment by way of the market. What girl power meant in a post–riot grrrl world was simply whatever elevated girls as consumers.” The villains of Josie and the Pussycats, Fiona and Wyatt, push this thinking even further: What if pop music could sell absolutely everything?

With authenticity, vulnerability, and trust brandished as tools for consumption, influencer culture has transformed us all into both victims and perpetrators of a neoliberal MegaRecords dystopia.

In the film, the team at MegaRecords sell special-edition cat-ear headphones for the Josie and the Pussycats livestream concert. In addition to providing audio, the cat ears are optimized to brainwash wearers via subliminal messaging. In 2021, we’ve evolved past the need for special headphones that hypnotize us into consumption, opting for hand-held devices that function as digital appendages instead. With our data increasingly monetized and sold (or sold access to, as the debate flows), the advent of the smartphone has been a goldmine for tech companies and advertisers alike. Indeed, the fine tuning of targeted ads on daily-use apps such as Instagram and Facebook has made shopping simple, portable, and only mere clicks away. In the film, musicians act as carriers for consumption, and in the eyes of their newly signed record label, Josie, Melody, and Valerie are merely vessels for profit. In 2021, it’s difficult not to recall either Britney Spears’s conservatorship or Taylor Swift’s battle for control of her masters as modern examples of this larger structural exploitation. As Vanessa Willoughby acutely notes in a recent Bitch piece about Spears, “under the banner of a capitalist, patriarchal society, a woman’s body is both a commodity and a dangerous force that needs to be controlled.”

Yet our present reality continually suggests that talent (or even celebritydom) is no longer a prerequisite to manipulating the masses into purchasing. According to Business Insider, “the influencer marketing industry is on track to be worth up to $15 billion by 2022.” While Josie, Melody, Valerie, Britney, Christina Aguilera, Beyoncé, and other pop stars are famous for their talent, influencers rely on their front-facing personability and likeness to secure sales instead. But make no mistake, the influencer industry is far from a democratizing force. While women make up 77 percent of influencers, they’re earning $108 less per post than their male counterparts. Of that 77 percent, most are overwhelmingly white and thin, perpetuating the inherent fatphobia and racism that runs rampant throughout our capitalist patriarchy.

In the film, brands dominate, each scene littered with product placement, including Coke, Target, McDonalds, Starbucks, Krispy Kreme, Motorola, among others. The omnipresence of these highly recognizable icons is a tongue-in-cheek subversion to the film’s core messaging. Are we ourselves being brainwashed? But in 2021, we have become the brands, having internalized their strategies in curating our digital selves for optimal engagement and reach. With authenticity, vulnerability, and trust brandished as tools for consumption, influencer culture has transformed us all into both victims and perpetrators of a neoliberal MegaRecords dystopia. Josie and the Pussycats is a hiss against America’s greatest virtue: spending (something that George W. Bush urged Americans to do in the aftermath of 9/11). It’s a film that tickles the absurdities of the past and, in doing so, has successfully determined the misfortunes of our future. So, as we look toward the next 20 years, salvaging a world disseminated by state violence, disease, and climate change, perhaps it would be wise to see this high camp box-office flop as a cautionary tale of a world overwhelmed by our collective curiosities: surveillance, globalization, capitalism, consumption. After all, it’s curiosity, they say, that killed the cat.

The Costly Quest for Superhuman Strength

5 Feminist Albums That Got Us Through July