Joy-Ann Reid and the Case for Redemption | Bitch Media 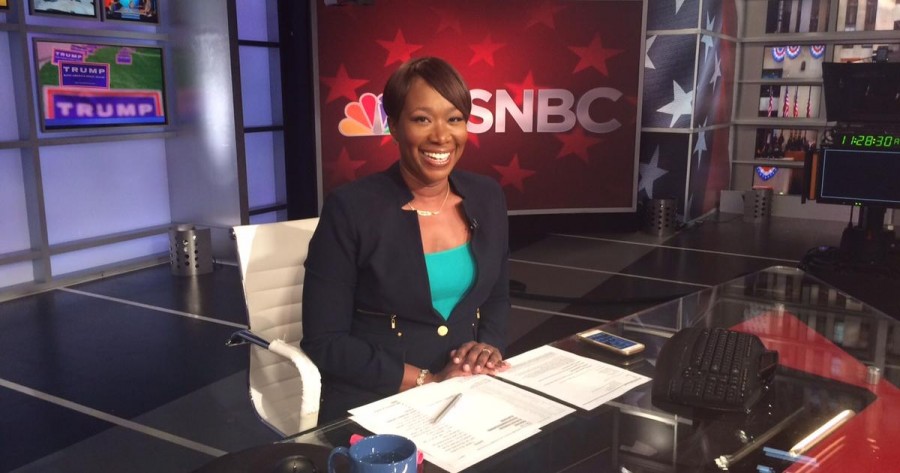 Joy-Ann Reid on the set of AM Joy (Photo credit: MSNBC)

MSNBC host Joy-Ann Reid has made mistakes—and then compounded those mistakes by seemingly lying about them. In November 2017, enterprising sleuth @Jamie_Maz uncovered homophobic blog posts that the then–Florida morning talk radio personality and current AM Joy host wrote about former Florida Governor Charlie Crist between 2007 and 2009, and confronted Reid about them on Twitter. She apologized, saying: “At no time have I intentionally sought to demean or harm the LGBT community, which includes people whom I deeply love. My goal, in my ham-handed way, was to call out potential hypocrisy.” Crist accepted, and the matter seemed to be over.

Until that same sleuth allegedly found more offensive blog posts in April 2018 and again challenged Reid’s position as a progressive media figure. Reid’s posts are terrible: She calls homosexuality “gross,” claims that “most straight people cringe at the sight of two men kissing,” and implies that gay men prey on young boys.

1/x From 2007 to 2009 @joyannreid authored a dozen homophobic posts not only attempting to out Charlie Crist as gay, she attacked & mocked him for being so.

She repeatedly referred to him as "Miss Charlie" and tagged posts about him under "gay politicians." (thread) pic.twitter.com/tRYvJ3lTc8

The subsequent fallout has sparked a lot of awkward questions that are all being addressed at the same time: Do people change? Do we owe people forgiveness? Are some celebrities and cable television hosts held to a higher standard than others? Can Reid be wrong and a victim at the same time? People need to answer for cruel, oppressive, and abusive actions, and the question of whether they should be forgiven and if they’ve genuinely demonstrated a capacity for change should be up to the people they harmed. This standard should apply to everyone, not simply those who can’t hide behind a shield of privilege and powerful friends.

Reid could have moved toward accountability by acknowledging that she wrote the posts, but instead, she fell back on the bizarre “I was hacked” excuse—which did not seem to be true. Reid walked back her claim on the April 28 episode of AM Joy, admitting that experts found no evidence of hacking. “I genuinely do not believe I wrote those hateful things because they are completely alien to me,” she said. “But I can definitely understand based on things I have tweeted and have written in the past why some people don’t believe me.” She also added that she has considerably evolved since the days of her blog, and she cares “deeply about LGBTQ, immigrants, people of color, and other marginalized groups.”

Her mea culpa fell far short for some viewers, but many of her colleagues, including Rachel Maddow, Nicole Wallace, and Ali Velshi, seemed to accept it.

Some journalists feel compelled to close ranks around their own, especially in an era when the president is attacking the press. But that’s a mistake. Being a journalist shouldn’t exempt you from scrutiny by fellow members of the media. We owe it to each other to hold fellow journalists to the same high standards as everyone else or the integrity of our own work gets called into question. Talking about the bad things our friends do is uncomfortable—it’s also necessary.

This isn’t just about the decade-old posts. Reid also has a more recent history of making transphobic comments. For example, she called Ann Coulter a “drag queen” or “dude,” playing on the strangely popular and very transphobic leftist discourse of implying that women they don’t like are “men in dresses.” She also went on a strange gender-essentialist ramble about Chelsea Manning and publicly praised a Gawker piece about “Barack Obama’s Indonesian T*anny Nanny.”

Reid is not the best test case for redemption, but that complexity makes her transgressions all the more important to talk about. Evidence seems to suggest that she still holds some of the ideas she claims are “alien,” and yet it’s also indisputable that Reid is being held to a higher standard than other television hosts who have acted inappropriately.

Society is hungry for scapegoats to assuage our own complicity and guilt, and Joy-Ann Reid would make a good sacrifice.

She’s both very wrong and very caught up in something larger: Society is hungry for scapegoats to assuage our own complicity and guilt, and Reid would make a good sacrifice. The furor over Reid’s homophobic and transphobic comments can’t be divorced from her Black womanhood. Racism and sexism often dictate how we culturally engage with Black women, and there was a certain sense of glee among some of her critics—such as Eric Wemple, who produced a sarcastic takedown for the Washington Post when her misdeeds were uncovered.

From her series of blog posts and recently voiced opinions on members of the trans community to her trying to cover it up, what Reid did was categorically wrong—and she should be held accountable for that. At the same time, it should be possible to talk about cultural double standards. About why a Black woman who said some very bad things appears to be facing more social consequences than a slew of abusive men who have done very bad things. No one deserves a free pass for abusive behavior, so why are some people getting just that?

It’s easy to look to high-profile examples and say things are changing. R. Kelly and Bill Cosby’s rightful reckoning is finally coming. Notorious rapist and acclaimed filmmaker Roman Polanski was just ejected from the Academy of Motion Picture Arts and Sciences, alongside Cosby. But other abusive men who were facing “ruined careers” (a.k.a accountability for their actions) are already quietly rehabilitating themselves. #MeToo has barely begun popularizing itself and yet the revolving door of shitty men is back at work: Tom Brokaw faced sexual harassment allegations, and 60 of his upstanding female colleagues, including progressive darlings like Maddow, leapt to his defense. Jeffrey Tambor got a loving profile in the Hollywood Reporter in the aftermath of sexual harassment allegations from a Transparent costar and his former personal assistant.

It’s hard to escape the idea that we collectively “owe” some public figures assumptions of good faith, redemption, and the belief that their heartfelt apologies are not just atonement but absolution. For others, meanwhile, there is no mercy, and race often plays a role here as well. Look at how Chris Brown became reviled long before #MeToo while Johnny Depp still lands leading roles and receives ardent defenses from J.K. Rowling and Benicio del Toro. Arguably, this unwillingness to address abusive behavior on equal footing is what landed us here in the first place; it’s why white men continue to thrive even as their victims cry out for justice and why being held accountable feels “disproportionate” to some viewers.

The use of “people change” or “I don’t think that anymore” as an excuse to avoid accountability is why it becomes so difficult to have conversations about genuine atonement, because people do change. Many of us probably said or wrote things in 2007 that we do not believe today, and while we likely wouldn’t appreciate being reminded of their existence, that confrontation could be an important moment for us and the world. Yes, we said those things. We should own them. They were wrong, and no one owes us anything in response to our decision to take responsibility for our mistakes. Here’s how we’ve spent the subsequent decade trying to make good on past misdeeds—and how that differentiates us from those who apologize with their hands caught in the cookie jar and very clearly don’t mean it.

When “people change” is simply used as a throwaway comment to dismiss harmful behavior and its consequences, it begins to ring hollow. As little more than an excuse, not a genuine engagement with the way people evolve. It reflects a culture where people demand neat, pat, instantaneous answers to very complicated, difficult discussions that need to unfold over days, weeks, or even longer periods of time. And this is unfortunate, because in a world without the possibility for authentic redemption, there’s little motivation for people to strive toward genuine improvement.

The Self as Specimen