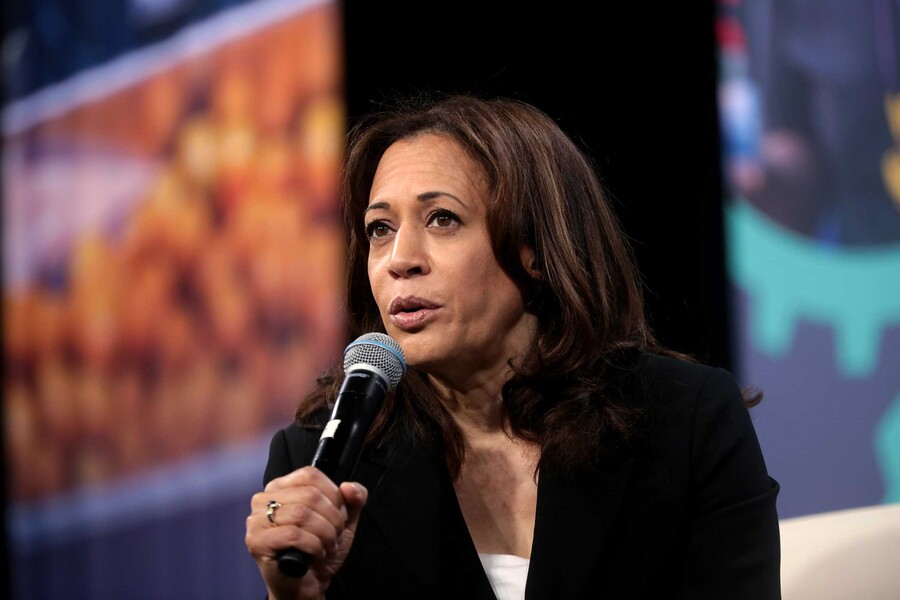 Senator Kamala Harris speaks with attendees at the 2019 National Forum on Wages and Working People hosted by the Center for the American Progress Action Fund and the SEIU at the Enclave in Las Vegas, Nevada. (Photo credit: Flickr/Gage Skidmore/2.0)

As soon as Joe Biden announced on August 11 that Kamala Harris would be his running mate in the 2020 presidential election that’s now less than 75 days away, the knives came out. And in the chaotic swirl that’s followed, pundits and politicos have been spinning in all directions, stabbing every which way in hopes of drawing blood from the first Black and South Asian woman to be nominated to the vice presidency of the United States. She’s a cop. She’s a radical liberal. Or is she a Marxist? She’s Black—but is she Black enough? She’s South Asian—but her Indian family is Tamil Brahmin, so can she truly represent for India?

In the absence of a solid angle of attack, the GOP has returned to the Birther well to suggest that perhaps Harris, born in San Francisco to immigrants, isn’t eligible to run at all. (She is, of course, but that hasn’t stopped Donald Trump from picking up the thread and running with it.) It’s not as though Harris is an unfamiliar name: As one of 2020’s Democratic presidential candidates in a political climate that continues to prioritize volume over accuracy and signal-boost conspiracy even when verifiable facts are right there, we can expect Harris’s groundbreaking significance to only become more muddled and contested between now and November 3. So it’s as good a time as ever to review what we know about the issues and policy Harris stands for—and what her election could mean for the future.

Quote: “I believe that healthcare should be a right, but the reality is that it is still a privilege in this country. We need that to change.”

Policy Positions: Harris’s MCA plan would allow all Americans to buy into Medicare from the jump, with newborns and people without insurance automatically enrolled in the 10-year phase-in. Private insurers who adhere to Medicare’s cost guidelines would be able to offer Medicare, in addition to other coverage.

Harris has been consistently pro-choice, and was endorsed by Planned Parenthood. She will protect reproductive rights and nominate judges that support Roe v. Wade. She supports repealing the Hyde Amendment and has expressed frustration at the historical difficulty of doing so. Harris has spoken about the racial discrepancies in maternal care and mortality, and in 2019 reintroduced the Maternal Care Access and Reducing Emergencies (Maternal CARE) Act in the Senate.

Quote: “Students shouldn’t fear decades of debt just because they want to pursue an education.” “It is completely upside down that we currently have a system where the funding of a school district is based on the tax base of that community.”

Background: Harris’s proposed policy to forgive $20,000 of loan debt only if students who received a Pell Grant run a business for three years in a disadvantaged community was widely criticized for being overly narrow.

Policy Positions: Harris has been critical of the current administration’s push to reroute funding for public schools into private and for-profit charter schools. She supports increasing funding for K-12 schools, with a focus on those with Title I status. She supports boosting teacher pay and fully funding the Individuals with Disabilities Education Act (IDEA).

Quote: “There is no place for prejudice against people who are lesbian, gay, bisexual, or transgender in our country.”

Background: As District Attorney in San Francisco, Harris established an LGBTQ hate- crimes unit. Prior to the legalization of same-sex marriage, she refused to uphold California’s Prop 8 in court. She also helped make California the first state to ban the use of “panic defenses” to downgrade charges or murder and assault, and in 2018 joined with House and Senate Democrats to introduce legislation to ban the practice nationwide.

Quote: “Arming teachers with guns would make our schools less safe. Instead, we should be arming them with fair wages, school supplies, and the resources they need to educate the next generation.”

“92 percent of all women killed by guns in high-income countries lived in the United States in 2015. It doesn’t have to be this way.”

Policy Positions: In her presidential primary, Harris—a gun owner herself—said she would sign executive orders to mandate background checks on gun buyers and close the “boyfriend loophole.” She supports a ban on assault weapons and on the sale of high-capacity magazines, and supports stricter regulation of gun manufacturers.

Quote: “As California breaks one wildfire record after another, we need to speak the truth—in order to mitigate these fires, we must combat the effects of climate change.”

Background: As San Francisco’s district attorney, Harris created the office’s first unit devoted to environmental justice. As California’s attorney general, she took on fossil-fuel giants like Chevron and was part of AGs United For Clean Power, an alliance of attorneys general who investigated ExxonMobil.

Policy Positions: Harris also sued the Southern California Gas Co. over a massive methane blowout from an underground storage facility on the outskirts of Los Angeles, citing the climate threat posed by the uncontrolled emissions of the super-potent greenhouse gas. The blowout was the largest known natural gas leak in U.S. history. The case was settled three years later, after Harris’s departure for the Senate, in an agreement that some environmentalists criticized as inadequate.

As California attorney general, Harris lent her support to a coalition of 1—was formed in the wake of disclosures that oil giant ExxonMobil had understood the magnitude of climate change for decades yet went on to mislead the public about the catastrophic consequences.

We can expect Kamala Harris’s groundbreaking significance to only become more muddled and contested between now and November 3.

Background: As former DA of San Francisco and AG of California—or, in her own words, the state’s “top cop”—Harris has a complicated, often contradictory record on reform. She garnered harsh criticism for, among other things, upholding wrongful convictions, not mandating the use of police body cameras, failing to investigate police brutality, and instituting a harsh anti-truancy program in San Francisco. Her voting record as Senator has been equally mixed: Harris sponsored the Justice in Policing Act, which would have made it easier to prosecute police. She also cosponsored FOSTA-SESTA, which criminalized online sex work and endangered sex workers.

Policy Positions: Harris supports reforming the criminal justice system by reducing police funding and reallocating funds to social services, job training, and mental health care. Her 2020 platform included mass incarceration, cash bail, and the death penalty. Harris is a cosponsor of a police reform bill drafted in the months following the murder of George Floyd that advocates a national ban on chokeholds, the creation of a national registry to track police misconduct, limits on qualified immunity, and ending the use of no-knock warrants in drug cases.

Background: Harris introduced the VoteSafe Act in April to expand vote by mail and early voting and to create safe alternatives to in-person voting during the COVID-19 pandemic.

Policy Positions: Harris supports restoring the Voting Rights Act, securing elections against foreign hackers, enacting automatic voter registration, and making Election Day a national holiday. She supports restoring voting rights back to formerly incarcerated people who have completed their sentences, but has been less clear about whether currently incarcerated people should have voting rights.

Read this Next: A Black Woman Vice President Can’t Save a Nation from Itself 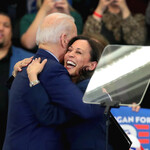 by Yannise Jean
The United States is ready to place the onus of healing the nation onto the shoulders of a Black woman.