North and Chicago Are Not Kanye West’s Karma | Bitch Media

Dear Kanye WestNorth and Chicago Are Not Your Karma 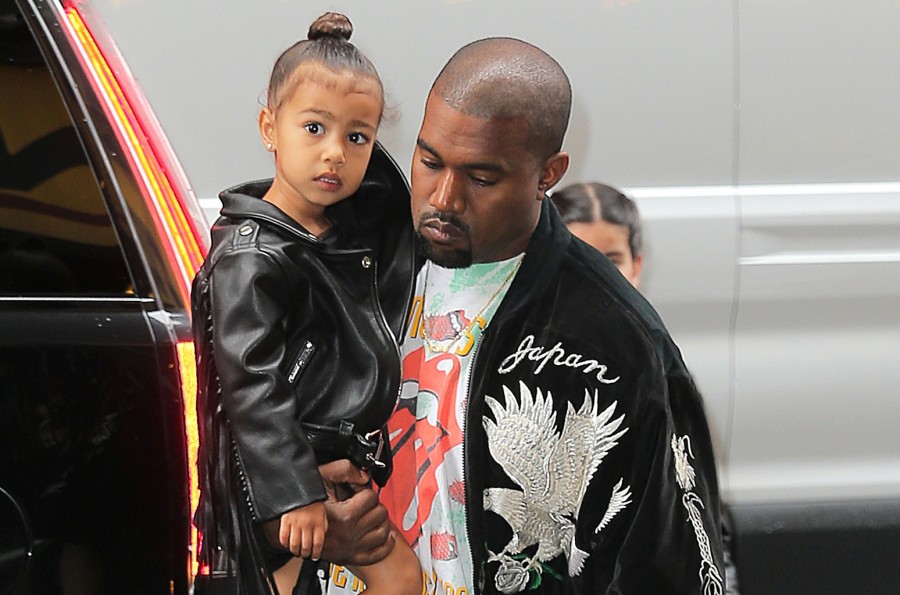 “We Major,” my favorite track on Kanye West’s classic 2005 album Late Registration, features two cringeworthy couplets I’d forgotten until recently. West raps: “Better than some head on a Sunday afternoon/ Better than a chick that say ‘yes’ too soon/ Until you have a daughter, that’s what I call karma/ And you pray to God she don’t grow breasts too soon.”

Back then, West didn’t have little girls named North or Chicago, but he knew fatherhood would require him to reflect on his sexual history with women. When I heard the lyrics of “Violent Crimes” (on West’s newest album, Ye), I immediately remembered his bars from 13 years ago, and my heart fell: The 40-year-old rapper espouses the same views as his 27-year-old self, but in greater, disturbing detail.

“Niggas is savage, niggas is monsters/ Niggas is pimps, niggas is players/ ‘Til niggas have daughters, now they precautious/ Father, forgive me, I’m scared of the karma.”

When I tweeted that “Daughters are not spiritual retribution for your misogyny,” many men promptly countered my assertion that it is not heartwarming to only feel remorseful for being sexist after they’ve had daughters. I never once mentioned the word “men,” but I didn’t have to. Enough of them huffed about how their daughters had taught them compassion for girls and women for me to perceive they considered those lessons to be integral to fathering girls.

They took my words as an attack on what they consider a positive aspect of fatherhood; sure, maybe it takes fathering a daughter for some men to change their views of female human beings, but better late than never, right? One man challenged, “Are you a man who had a daughter? How can you tell someone what their spiritual retribution is?” (as if my status as a woman precludes me from telling fathers what is harmful to daughters). Another rebutted that sons were not punishment for misandry. And plenty of others chimed in with curt responses like “Yes [daughters] are,” “No,” or “You sure?”

West is not the first man, especially in hip hop, to believe that having girl children is a form of payback for the way he has treated women. As Nas writes in his oft-quoted 2012 song “Daughters,” “They say the coolest playas and foulest heartbreakers in the world/ God gets us back, he makes us have precious little girls.” And even Jay-Z rapped before the 2012 birth of Blue Ivy that the demons in his past would ensure his daughters eventually paid for his sins.

Daughters are not spiritual retribution for your misogyny.

Nor are they tiny spiritual guides sent to newly show you the humanity of girls and women.

In both “We Major” and “Violent Crimes,” West references karma as the spiritual apparatus that will deliver his comeuppance. His loose understanding of the Buddhist concept could be considered faulty because the premise has no relation to the “cause and effect” teaching of kamma-vipaka. Beyond that, no causal relationship exists between the birth of a girl child and the past sexist or misogynist demons of a penitent player. Put simply: Breaking a woman’s mind, body, or heart does not directly cause any man to have a daughter instead of a son.

If daughters are men’s punishment for treating women callously or carelessly, then what are sons? Rewards for good behavior? This insulting idea places a burden on baby girls that they neither own nor deserve, one that associating their existence with a father’s future heartbreak. People call down girl children like plagues; they wish daughters on men who have behaved badly, as if caring for girls inflicts a suffering similar to the pain men have caused in their pasts.

A stellar example of this exists in Grammy-nominated country artist Brandy Clark’s 2016 song “Daughter,”  in which she growls at an ex, “You son of a bitch, I hope you have a daughter.” But many a daughter of many a misogynist father can attest that bringing a female child into the world is no guarantee of instant or authentic allyship with women. (Just ask Eminem, who has often penned lyrics about his daughter Hailie, but is much better known for his violent lyrics about women.)

West’s belief in the karmic arrival of daughters to “pimps” and “players” existed long before his own daughters did. For many, however, this introspection is only prompted by the wonder of childbirth and the new responsibility of protecting a daughter. Perhaps it is the manifest innocence of an infant that prompts fathers to at last consider the world of misogyny that awaits girls and women—a world they previously contributed to. But it is more than frustrating to realize how many refuse to see the humanity in girls and women until they create one themselves and feel a sense of ownership.

And that nascent understanding is incomplete. A man’s postnatal epiphany that girls are people too passes for an awakening to women’s plight without requiring much else to challenge the social beliefs that uphold sexism. The actions of fathers charged with protecting daughters seldom include confronting other men and boys in their lives on their misogyny, or awareness of perpetuating that same misogyny in other parts of their lives. West proclaims to know that “Niggas is savage / Niggas is monsters” because he is one—again, a common view, but not exactly an enlightened one.

Many fathers view male sexism and abuse as an immutable constant, but instead of working to confront that, they seek instead to control their daughters’ bodies. They warn their daughters against walking at night and brandish guns at their prom dates. Perhaps West’s tongue is firmly in cheek when he raps: “Don’t do no yoga, don’t do Pilates/ Just play piano and stick to karate/ I pray your body’s draped more like mine/ And not like your mommy’s.”

But similar to his early-career quip about praying his then-fictional daughter doesn’t grow breasts “too soon,” his concern centers on her pubescent development rather than condemning or directly addressing the predatory gaze of men on girls. This stigma placed on girls developing “early” has an especially pernicious effect on Black girls, who are often oversexualized. A father wishing his own physical form on his daughters so they might avoid male predation follows the fallacy that girls invite harm merely by developing breasts and curves.

He doesn’t want to merely protect his girls from predators, but from exercising their own sexuality. West openly admires his wife Kim Kardashian-West’s body; however, he also prays his daughters don’t inherit it.

Happy Fathers Day! Thank you for being such a good dad to our babies!

Connecting the future sexuality—or harm—of girls with their father’s sexual past continues the same controlling sexism that men purport to be free of by virtue of having daughters. But often the only thing that changes is their pain when a girl or woman they love suffers from behavior they’ve committed on someone else. Taken benignly, “Violent Crimes” is West’s inartful way of acknowledging that the misogyny men put into the world will one day affect their daughters. That’s not karma; that’s recycled patriarchy.

Daughters are not sent to this world for their father’s punishment, redemption, or atonement. As much as a son, a daughter arrives as a gift to whomever receives her. She does not deserve to be saddled with her father’s sexual baggage based on her biological sex—no child does.

The Long Feminist History of Fighting for Universal Childcare