Kate Nash DGAF About Your Agenda 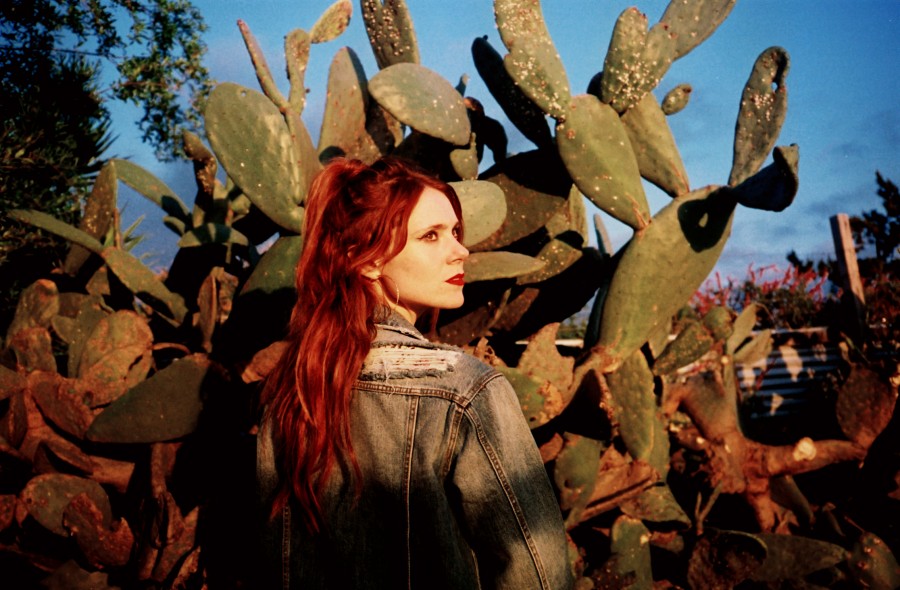 The UK-based punk-pop queen Kate Nash recently released a perfect mainstream/underground hybrid EP, Agenda. The vibe is gyrating with 50 of your closest friends on a dance floor, middle fingers to the sky. It’s the feminist pop-punk anthem we’ve all been waiting for someone to throw at us so we can scream-sing “I don’t give a fuck” just before putting in a call to our senators.

Nash raised over $150,000 on Kickstarter to release her fourth album completely independently. This summer, you can find her as one of the 14 inspiring and powerful ensemble of women in GLOW, the new Netflix series about the ‘80s women’s wrestling league, Gorgeous Ladies of Wrestling. Later this year she’ll be touring the UK to celebrate the 10-year anniversary of her first record, Made of Bricks.

Here, she talks to Bitch about speaking up and out, thriving in an industry that doesn’t necessarily have space for her, and finding new purpose and connection to her body.

I just don’t care. I have a song on my second album called “Mansion Song” and it’s really aggressive punk poetry. Loads of people told me not to put it on my album and I was like, “No, I really want it on here; it’s really important to me,” and I didn’t really think about the consequences. I just kind of DON’T. I think I have that inside me where I just wanna fuck shit up a little bit. I think people SHOULD do that.

I feel like a lot of other musicians’ excuse for not writing political content is that they don’t want to alienate anyone or lose their audience.

Yeah. I think people like me because I don’t worry about that. That’s my appeal. I’m not the cookie-cutter pop star. I’d feel wrong doing that because I would be like, “This isn’t me. Why am I doing this? I feel like shit. I feel fake. I don’t like it. I feel really confused. What is songwriting? What is art? What am I doing?” That is where my head goes when I’m trying to write something that isn’t true to me

Whereas, with “Agenda,” the beat was going, and I wrote it in a few minutes. That feels very natural to me.

You would prefer to say what you want to say and not be successful, rather than be really successful saying a bunch of bullshit.

Yeah, I want to succeed, but it doesn’t feel like a choice to me. It feels so wrong and depressing, and I feel like I’m peeling my skin off to be something I’m not. I can’t do it. I’ve tried.

Agenda, to me, sounds like mainstream pop. It could easily fit in on the radio. I feel like most musicians who say what they want are more alternative, or what they’re playing would never fit into mainstream.

Well, it’s reflected in that [Agenda] isn’t. It hasn’t become mainstream and it doesn’t get support from [the] mainstream.

Do you think that’s because of who you are or what you talk about?

It’s probably because I talk about the Gaza Strip [in “Agenda,”] and that’s a really controversial thing to talk about. I didn’t really think about it when I wrote it. I know it’s not black and white; I know it’s not simple, but the reason I mention it in the song is because I watched this news piece where they went to the Gaza Strip. I didn’t know that the population was predominantly children, so that really shocked me, and it made me angry that there are historically long feuds that are so complex that they can’t be solved even when it comes to deciding to kill a bunch of kids.

This seems like a brand new world for you because you’ve been independent, but now you’re independent with the Kickstarter hype and you’re coming out with this fourth album which is pretty different than anything you’ve made. What are you feeling?

I think I’ve been feeling for a while that I exist in a space, and I don’t know what that space is, so I don’t really know what my world is. There are frustrations that I have when I’m like, “I don’t really fit in anywhere,” but I’ve also had a lot of drama in my career. But it’s coming to the end of a cycle. I think once I’ve done The Made of Bricks Tour, and with GLOW coming out, I think it’ll be more clear and I’ll be able to carve out my own space and just kind of see where it all goes. I don’t know what it is yet because my life is about to change with GLOW coming up.

So, I’m floating in a weird spot. It’s hard in the music industry to not feel like you’re constantly failing. I know I’m not alone in that. That’s basically how every band and artist feels—even the biggest ones you wouldn’t believe. The industry makes you feel like that, because they have more control. But it’s really important to enjoy the moments that you have and the success you have because we’re mostly just like, “I’m not good enough. I’m not here yet, and I haven’t got this,” and that’s my biggest battle, trying to appreciate what I’ve got. That’s probably just life in general. I’m trying to stay comfortable with the fact that I don’t really know where I exist in terms of what kind of artist I’m seen as or I am. But I keep doing my own thing and working hard and trying to enjoy what’s happening. Enjoy the ride.

I think women, especially in pop culture, have a hard time speaking out when they care about issues. I’m wondering if you’ve noticed some of that when you were working with so many musicians for that Standing Rock letter.

Usually people are non-committal and nervous, but I think it happened at a time where everyone felt so desperate and actually scared. Trump becoming president really affected me in a way where I actually felt depression and anxiety every night. I’ve never felt that before. It was like heartache or something. I was genuinely depressed. And I think a lot of people felt that and it hasn’t happened to a lot of us before. I think this has changed a lot of our lives and that’s why everyone I spoke to wanted to sign that letter. Everyone wants to help, so I think it’s a time where people feel like they wanna be engaged.

Have you noticed people staying away from a political or social issue in the past?

I have had girls say to me, “I wanna call myself a feminist, but I wanna be able to do other things,” and I’m like, “Okay, do you want me to show you a dictionary because it’s not like I’m asking you to join a sorority or the army.” A lot of people didn’t want to collaborate with me on things because I was too aggressive.

Now that we’ve had Beyoncé and Taylor Swift say “I’m a feminist” or Beyoncé standing with “feminist” behind her, that’s huge. I was in Topshop and there was a shirt that said “feminist!” When I was talking about feminism in 2007, not many people in the pop world were. I had journalists tell me that I was the only one that would talk to them about feminism, that publicists would jump in and say, “She’s not gonna answer that.” when someone was asked if they were a feminist. It was not cool to be associated with.

I’m really excited about GLOW coming out for lots of reasons. It’s an amazing show, it tells the stories of these women really well, and it’s addressing a lot of issues in the wrestling community, which there’s still A LOT of racism and sexism. But [GLOW] also understands the power of wrestling and the culture, how amazing it is, and how empowered it makes people.

I also think people are getting to point where Trump’s been in for a while, everything has been heavy for a while, and we need some escapism. We need to move to the next phase where we start to feel good again. Because you can’t really make positive change unless you’re feeling positive. I think anger can fuel you and you can create some great things with anger, but when you really start to shift things is when you feel good and you feel stronger.

You can be like, “Yeah, the world is fucked and I’m angry about this,” but when you’re only driven by anxiety and anger it gets you to a certain point where you start to hurt yourself. I think GLOW is coming at the perfect time. People need something to feel good about. You need to inject some positivity into your life to be able to keep fighting the battles. It can’t always be doom and gloom, otherwise you’ll just collapse.

I’m excited for this show to give people escapism and empowerment. I’m especially excited for women to see women using their bodies in such an empowering way.

Is that how you felt while filming?

For me it’s been such a journey to learn how I really feel about myself, which isn’t that good. I work really hard on trying to feel good about myself, but I realize how insecure I am about things and wrestling helped me with some of that and empowered me. I wanted to look like a good wrestler; I wasn’t just worried about looking good. I wanted to look like a genuine wrestler. I had to keep my partner safe. I had to learn the moves. I had to flip. I needed to learn to do it all safely and make it look good. It made me feel really excited about my body because I was using it instead of just criticizing it.

I don’t necessarily recommend every young girl goes out and tries to wrestle because it is very hard on the body, but finding something that gives you a purpose with your body. Even just going on the journey with the characters will be really cool because I think we’re so held back by how shitty we feel about ourselves, if we’re really honest.

I also think the world doesn’t want you to look like a wrestler. So, it’s hard to feel convinced. Like, maybe I want to be a wrestler, but no one is gonna like me…

—and girls are taught to not take up space, to make themselves smaller. It’s literally not ladylike to be big and strong. But I’ve always been kind of a big person. I take up a lot of space. I feel big in spaces. I’ve got big feet. I’ve got big hands. I’ve got big shoulders. I’ve never been able to sit somewhere and feel invisible and it’s nice to embrace that. Like, I’m big and that’s good because I have strong feet and that’s gonna help me with wrestling.

All of the women are so vulnerable in the show, the men too. Everyone on the show was vulnerable and exposed themselves and really went out for something. I think it’s a really empowering show.

DOR is the creator of Lesbians Who Look Like Justin Bieber & Everyone is Gay, author of This is a Book for Parents of Gay Kids and CEO of Radimo—a gender neutral clothing brand. DOR has written for Nylon Mag, Cosmo, Autostraddle, Time, and MTV. She loves goddesses / witches, living near water, and staying in the sun as long as possible without getting a sunburn. Libra + Pisces rising.

by Katie Presley
This week's mix, by guest DJ Katie Monks of Dilly Dally, is all hope, claws, and raw power.