I need your help.

As one of Bitch’s founders, I have lived through at least two deaths of print. The first was shortly after we began as a zine in the late ’90s, when the internet was still called the World Wide Web and digital evangelists were insisting it was going to revolutionize the world and make print obsolete. One of those things happened; the other did not.

The second death came a little more than 10 years later, when the United States was plunged into recession, print-advertising revenue cratered, and many of our fellow independent magazines were forced to close. But once again, reports of print’s overall demise were premature.

Looking at the number of print magazines that have shuttered in just this past year, however, suggests that we’re now on the brink of a third print crisis, and this time I’m scared Bitch isn’t going to make it out unscathed.

2019 has been a rough year for nonprofits and a nearly catastrophic one for media outlets; Bitch is both. In 2019 alone, 18 outlets (and counting) have either shuttered their print magazines or disappeared entirely. From print publications like Glamour, ESPN magazine, and Mad magazine to fellow independent outlets like The Establishment, Pacific Standard, and Utne Reader, this is an industry-wide collapse at a scale I’ve never seen before. (That’s certainly what it feels like anyway.) To see long-running, award-winning outlets folding one after the other is chilling enough. To watch it happen from the vantage of an independent, explicitly feminist magazine operating without the safety net of any seed funding or venture capital? That’s a weight we haven’t been able to shake off all year.

But Andi, maybe losing the print version of Bitch isn’t such a big deal!

That’s a good point, and it’s one that we’ve debated time and again over the years. In 2009, we strongly and publicly considered going all-digital, but the response from our community spoke loud and clear: Keep Bitch in print. 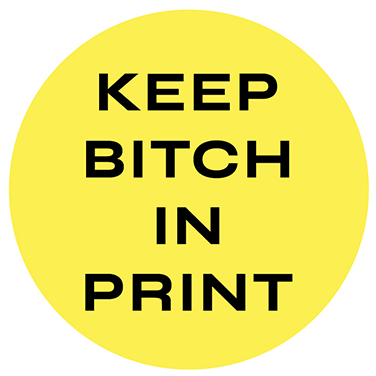 Bitch magazine remains the primary reason our monthly members join The Rage. It’s what readers tell us makes them feel anchored to feminist community and discourse even when they might not have access to feminist community in real life; the first spark of curiosity for folks when they see the cover peeking out of a newsstand; the first print byline for too many writers to count that have all shed light on issues and perspectives that wouldn’t have found a home anywhere else.

We’ve made it 23 years in print and we refuse to give up now.

But the reality is that without a big influx of help from our community in the next two weeks, we will not be able to keep operating Bitch Media as you know it.

So I’m asking you to please donate anything and everything you can today to help us keep Bitch in print.

"We Were Feminists Once" Available Now!