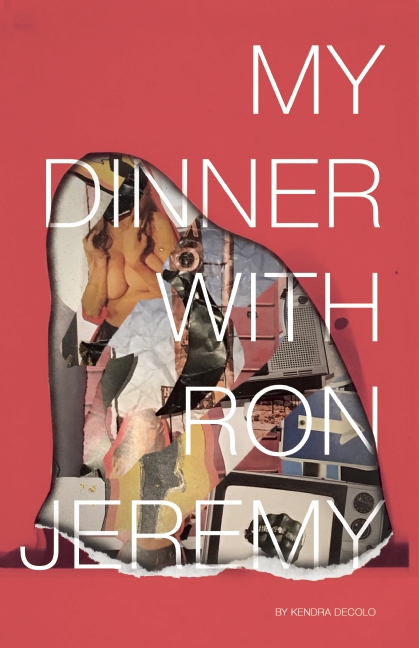 Kendra DeColo’s poetry has been described as electrifying, transformative, and my personal favorite, “an enemy to family values.” Her work is ferocious and tender, demolishing patriarchal language and using the fragments to build riotous new worlds where the absurdity of human desire and anxiety is rendered deftly in drug store aisles, Waffle House counters, and apocalyptic gas station snack bars. As an artist, DeColo has range and swagger to spare, so it seems fitting that her newest collection, My Dinner with Ron Jeremy found a home with Third Man Books, the literary imprint of Jack White’s Nashville-based record label.

I am grateful to DeColo for taking time out of her busy schedule to talk with me about her new book and the subtle (and not-so-subtle) ways women are denied access to various spaces.

BRITT ASHLEY: After months of design coordination with Nashville-based printers Lithographics, you found out that the company was refusing to print to the book due to content “inconsistent with their values.” As disappointing and logistically difficult as is would be to have to start over with a new printer, what you were most frustrated with was yet again being pushed out of a space that you “had been misled to believe I had access to, the reasons given kept purposefully vague.” Why is that idea of being misled so important?

KENDRA DECOLO: “Misled” is an important factor because it is about how businesses and organizations are allowed to be two-faced; they can pretend to value diversity or merit in their brochures, thus misleading applicants/patrons to enter their establishment, while then operating by a completely separate set of values/practices. In this sense, an MFA program or writers’ conference that aggressively recruits women and POC students to showcase their diversity but then refuses to actually support these students in meaningful ways is exploitative.

On a personal level, aside from the repugnance of intentionally misleading people to promote one’s own image/agenda, it really comes down to time—my time. If you pretend that you are a public, nondenominational company and then refuse to print my book because of its content, you have messed with my time and energy. I’d rather you have a sign up that says “Jesus-loving poets only”— it would save us all a lot of grief.

In your essay, “Encounters with Misogynists or, the Lap Dances I Never Received,” you talk about how, in the literary world, “explicit acts of sexism and misogyny can be transmuted under the lack of transparency into justifiable acts.” Sometimes it seems the more awareness there is of systemic misogyny and racism, the more both individuals and institutions seem to double down on oppressive behavior. As a writer and a feminist, how do you choose when to fight your way into a space that may not want you and when to create a different space altogether?

Yes! It’s almost a defense mechanism kicking in—a protest to show that “everything here is fine!”

I’m thinking of the quote: “When someone tells you who they are, believe them.” I’ve encountered literary spaces so hostile to women that it made the decision easy: This isn’t a place that respects or nourishes me in any way. I will be on my way. That is my basic litmus test—do I feel valued in this space, or do I feel like I have to defend who I am? But sometimes it’s more complicated and it’s harder to walk away from an opportunity that, while being spiritually depleting, might be helpful professionally.

I think I’m still figuring out the balance between entering hostile spaces and creating loving/nurturing communities within them (like at a writing conference, for instance) and then choosing to create my own (such as making my own reading series or seeking out writers and editors to collaborate with outside of the bigger establishments). The great thing is that there are so many people out there creating inclusive writing communities, starting new literary journals, et cetera—there is actually an abundance of spaces to be possibly welcomed into. I think we’re in a time when “literary gatekeeper” is losing its power, which is a wonderful thing.

One of the many things I love about this collection is the wonderful friction between the rawness and desires of the body, especially the maternal body, alongside these kind of slick, prepackaged cultural elements, like processed meats, ‘80s television shows, Cadillacs, Channing Tatum, and the Playboy Mansion. How is pop culture important to poetry?

Thank you! When I first started studying poetry, I heard a lot of teachers warn against writing explicitly about pop culture—that you run the risk of dating your poems. It’s been liberating to realize that writing about a new pop song or TV show can have the same function as writing about mythology or a Grecian urn. I love poems that can weave together multiple idioms, references, and narratives—poems that break down and reclaim cultural signifiers. Hanif Willis-Abdurraqib is a poet who does this beautifully; he has a series of poems in conversation with pop love songs (like Carly Rae Jepsen for example) that both honor the genre while transcending and complicating their tone. Terrance Hayes is the first poet I read who wrote about figures like Mr. T, Big Bird, Kool Keith, et cetera in a way that showed how much we see ourselves in their characterizations, how much of our identity is formed and contested in these mainstream spaces.

I like the idea of a book having a patron saint. In my first book I had a few poems inspired by Rodney Dangerfield, and his energy of vaudevillian sexuality and loneliness seemed to permeate the other poems. Ron Jeremy holds a similar place in my mind. A lot of the poems, even if they aren’t directly about him, are connected to his pathos.

You have described this book as feminist erotica, and you use pornography as “a starting point to talk about sexuality, agency, and identity; the poems about pornography set adjacent to poems about motherhood, coming of age, and politics.” What influenced you to set these elements in conversation with one another?

I’m interested in how pornography mirrors and distorts our sexual interests/obsessions/demons; its associations with coming of age, addiction, and shame. For a lot of people, porn is how they first encounter their sexual selves. But really, what happened is that last summer I was watching the news (specifically, coverage of the GOP nomination) obsessively in a way that started to feel like watching pornography. The coverage itself on many of the networks was so exploitative, reductive, and crass that the comparison started to feel more and more true. I was pregnant at the time, so all of these ideas converged and presented themselves in a way that I had to explore.

How has motherhood impacted you as a feminist and a writer?

Motherhood makes everything more immediate. There is no room for abstraction or self-pity. And there is so much less time for bullshit. It has forced me to become much more of an active participant in my own life, to become the kind of person I want my daughter to be inspired by—or at least I try to fake it really well. This means I am constantly checking my baggage, setting aside insecurities and self-doubt, and claiming my space so that she can see what it looks like to be a woman who doesn’t apologize or ask permission unnecessarily.

As a writer, I’ve noticed that I’m much more interested in constructing clear narratives and telling stories. I think the desire to create safe, clear spaces in my own life naturally feeds into my writing—I’m a little less willing right now to excavate my demons or let my subconscious take control. This might change. I eventually hope to be able to separate my mother and writing selves enough so that I can shut the door to my office and let the wolves in.

What pop culture are you currently consuming?

My pop culture consumption has dwindled down to a pitiful supply. I used to read Dlisted and Jezebel on my phone every night and see even the worst, most embarrassing action movies on a weekly basis. These days I mostly read think pieces about albums or movies I haven’t yet seen, usually while I’m breastfeeding. My husband and I did get to see the new Ghostbusters, which was amazing. I was a huge Leslie Jones fan before the movie, but now, given her performance and everything she’s gone through because of it, she’s my fucking hero. Also currently watching Samantha Bee’s Full Frontal and Richard Price’s The Night Of, which I think is incredible.

Relevant: Ding Dong: Anthony's Weiner Is His Own Damn Problem 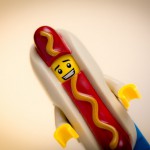 by s.e. smith
People are eager to view Abedin's husband's infidelity as a strike against the Clinton campaign.