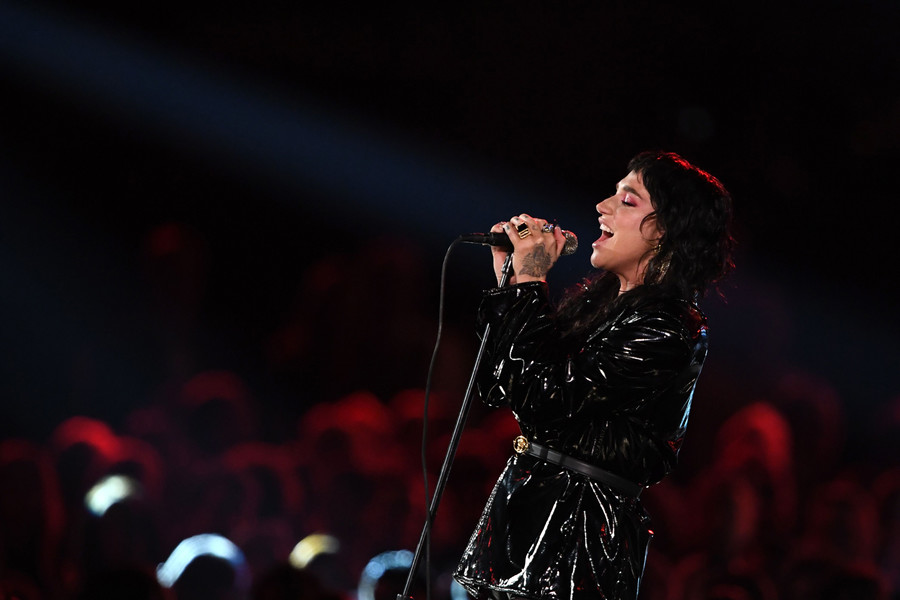 “‘You’re the party girl, you’re the tragedy’/
But the funny thing’s I’m fucking everything”

I measure my life in a series of “befores” and “afters,” defining eras as “before I went to college” or “after I met her” or “before this happened to me.” There are many key experiences in my life that triggered a before and after, and as much as I wish I could go back to all of the befores, these experiences—both traumatic and joyful—have changed me. Since 2014, Kesha (previously known as Ke$ha; she dropped the symbol in 2014 after finishing treatment for an eating disorder), her music, and her career have existed in a period of “afters.” Before 2014, she was a pop star best known for songs about sex, drinking, partying—and not much else.

Kesha’s first major hit, “TiK ToK,” established her as a Jack Daniels–swigging party girl—“Wake up in the morning feeling like P. Diddy,” she bragged in its opening lines—was released in August 2009 and peaked at number one on January 2, 2010, making it the first number-one hit of the 2010s; the song made digital sales history and her debut album, Animal, sold 12.8 million copies in 2010. A 2010 review in The Guardian was skeptical about the singer’s video-ready bad-girl image, warning that, “Ke$ha’s time in the spotlight may already be running out,” but the high-energy pop hits—“Your Love is My Drug,” “We R Who We R,” “Timber,” and more—kept coming. For me, from 2009 to 2012, Kesha was the soundtrack of every middle-school dance, party, prom, long drive—everything.

And then Kesha became famous for something else: In October 2014, she sued her producer, Lukasz Gottwald (also known as Dr. Luke), who she had been working with since 2005, when she was 18. The suit included claims of sexual assault, battery, and long-term emotional abuse. Kesha asked a judge to release her from her contract with Dr. Luke’s Sony Music imprint, Kemosabe. That same day, Dr. Luke countersued Kesha for defamation, which resulted in a case in California (Kesha suing Dr. Luke for abuse) and another case in New York (Dr. Luke suing Kesha for defamation). In the nearly six years since, Kesha has been engrossed in a legal battle that has consistently undermined her claims and her autonomy over her own art—a story we have seen time and time again.

To make an long, upsetting, and complicated story short: Kesha’s plea to be released from her contract with Dr. Luke was dismissed in New York and Kesha ultimately dropped her California lawsuit in 2016. In 2017, both Kesha and Dr. Luke tried to amend their claims in New York, with Kesha shifting her focus to be about the contract itself, rather than the abuse; Kesha’s plea to amend was rejected. Finally, in 2018, the court upheld the rejection of Kesha’s claims, ultimately ending her suit to be released from her contract with Dr. Luke and leaving his defamation suit as the last of the two cases, and, as of this month, Kesha is still seeking a reversal of the rulings in the defamation case.

Amid all this, 2017 brought Rainbow, Kesha’s first album in five years. Released through Kemosabe and Sony Music but not produced by Dr. Luke, Rainbow was a deeply personal work that was met with both critical and commercial acclaim, and heralded as a “rallying cry” for survivors of sexual violence. In a review for this site, Melissa A. Fabello wrote, “There are so many moments on this album where you can feel Kesha addressing her abuser directly or reckoning with healing from trauma….Rainbow is more than a comeback album for Kesha; it’s a victory for all of us who have hurt and are healing.” Rainbow was a departure from her previous music, featuring emotional vocals and vulnerable-yet-triumphant lyrics about healing that made it clear that Kesha was back. She survived, and came out the other side a different artist than she once was.

At the time Rainbow was released, I was beginning my own journey of healing from sexual violence. I sought refuge in its music, grateful for songs that were so explicitly about healing from and overcoming that kind of violence. I tried to stop being the party girl and leaned into being the tragedy. I felt seen by the sound of Kesha’s voice—raw, honest, and unapologetically sorrowful—and it allowed me the space to understand and accept that I was now different, that I was in the after—and that it was okay. I’ll never forget the feeling of singing “Woman” with my college a cappella group to an audience full of people, many of whom knew or supported one of my assailants. I’ll never forget watching Kesha’s 2018 Grammys performance and seeing women standing behind her wearing white, an embodiment of their support for her, and feeling for the first time that there was room to be angry, to be sad, and to be a survivor—and to do so within in the previously limiting confines of pop music.

In the years following Rainbow, Kesha’s legal woes grew quieter, but in many ways her name and her lawsuit are now inextricable. Rarely do we hear Kesha mentioned, in media or even in casual conversations, without reference to the lawsuit and the traumas that drove them. But finally, on January 31, Kesha released her fifth album, High Road—the first since Rainbow came out in 2017. I listened to High Road three times through before I even ate lunch that day. I felt joy as I sat, subtly dancing in my desk chair, listening to her once again sing about sex and parties and alcohol and friendship. I felt joy in hearing Kesha make a brief return to her before and become the party girl again, and in my own party-girl response to her.

In High Road Kesha honors the before, while still celebrating and acknowledging the after. In “My Own Dance,” she begins by explicitly referencing her Warrior days: “Woke up this morning, feeling myself, hungover as hell like 2012, fuck it/ We get it that you’ve been through a lot of shit, but life’s a bitch, so come on, shake your tits and fuck it/ What’s a girl to do?” She even features her former self, Ke$ha, in the fun and sexy song “Kinky” where she sings, “Tell me the freakiest shit you secretly wanna do/ Baby, don’t be embarrassed/ Probably wanna do that shit too.” Throughout High Road, Kesha is rewriting what the aftermath of sexual violence can look like for those it impacts. Where Rainbow was explicitly about healing, High Road feels like healing—and for Kesha, that means proudly reclaiming the very topics that are so often used to blame victims of sexual violence. You can be a survivor, it asserts, you can continue to heal, and in doing so you can still honor the person you were before—sending them love and celebrating them.

Perhaps most important, High Road finds Kesha fearlessly proving that though she is in the after, her artistry does not need to be defined by Dr. Luke. “I don’t feel as if I’m beholden to be a tragedy just because I’ve gone through something that was tragic,” she said in a November 2019 interview with The Guardian. “That’s really important for people to know–you do not have to be defined by something that was done to you.” Still, less than a week after the new album was released, the after came for Kesha once again: On February 6, New York Supreme Court Judge Jennifer G. Scheter ruled that Kesha defamed Dr. Luke in a text message to Lady Gaga, in which Kesha alleged that she and Katy Perry had been raped by “the same man.” Less than a week after her album was released, we were reminded once again that there is still a very difficult path ahead of her. Not only was the ruling devastating for Kesha and survivors everywhere, it sets a dangerous precedent for future cases—some of which are already under way.

Where Kesha’s “Rainbow” was explicitly about healing, “High Road” feels like healing.

In the music industry, producers and record labels are undoubtedly in a position of immense power over artists: For the last six years, Kesha has been forced to continue working with and for her abuser, her own emotional distress contributing to his financial benefit. What started as a plea by Kesha to take back her voice has ended with the legal system restricting it even more, so much so that she is now being punished for speaking her truth, privately, to her friend and supporter. This ruling has the potential to further discourage victims from speaking out against their abusers because the courts are showing victims that doing so carries an immense secondary risk. Dr. Luke, Sony, and Kemosabe now hold even more power over Kesha, and the release of this decision on the heels of her latest album shows us that no matter what, this case and its losses will continue to loom over Kesha and her career.

As long as she keeps making music, Kesha will not be truly free. Before the release of High Road, Kesha spoke to The Atlantic about her shift back to joyful pop music, saying that on Rainbow, exploring joy was something she was hesitant about, but now she wants to be the cheesy pop star she is. “I don’t have to live in being a tragedy, or being a party girl,” she said. “I can be all of the things.” Kesha will never return to the her before, and neither will I, but she can exemplify what it means to honor both who you are and who you were.

Read this Next: After the Storm