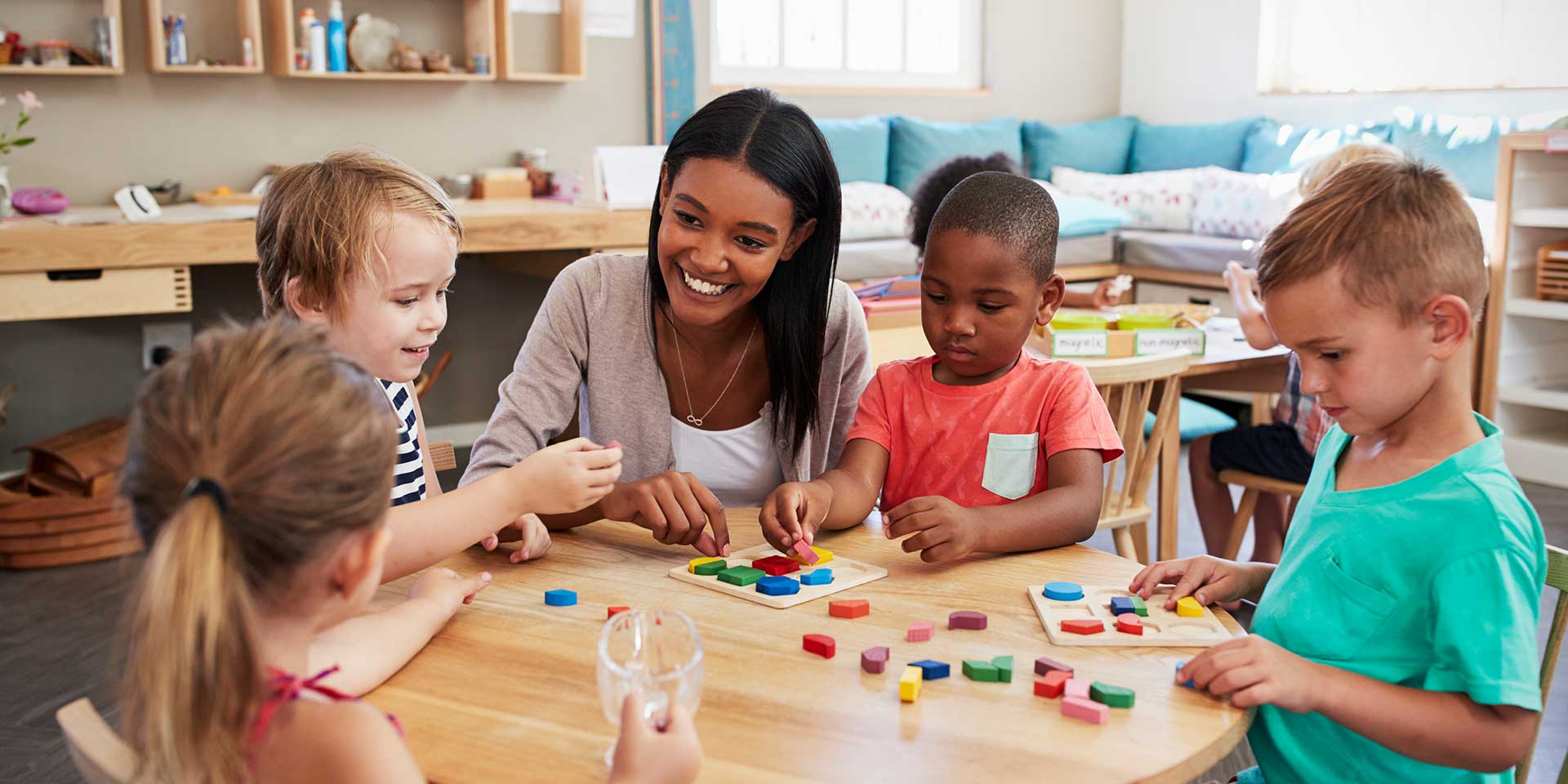 After my daughter was born in 2012, I was faced with the dilemma all parents face in the United States: What to do with her while I was at work. My employer, like most U.S. companies, offered no paid parental leave. I couldn’t afford to take months off work unpaid. I also wasn’t making enough to afford eight hours of childcare five days a week (in my city, that would have cost me $1,800 a month, several hundred dollars more than my mortgage payment). Luckily, my office did offer one concession to new parents: We could bring our babies to work. I took my daughter to work with me until she was six months old. At first she slept much of the time strapped to my chest while I worked at my standing desk. As she got older, she was often scooped up by an adoring colleague, carried off, and only brought back—usually by a different person—when she needed to nurse. I would hear her giggle across the office as I answered emails or researched lesson plans. It was an innovative, but imperfect, alternative way for me to spend more time with my daughter in her first few months of life.

I was grateful to have an option that most U.S. parents don’t. I didn’t have to separate from my baby before I felt ready, I got to return to a job that I liked, and I had lots of eager helpers in the office. I worked in a white-collar office, so bringing my baby to work was possible in a way it wouldn’t be if I worked on a factory floor or in a restaurant kitchen. But I am also wary of this bring-your-baby-to-work solution for two other reasons. First, it’s a dodge away from organizational responsibility for providing paid parental leave dressed up as a progressive, family-friendly policy. Second, it’s a Band-Aid for the gaping wound that is the debilitatingly dysfunctional U.S. parental leave and childcare systems, which are bad for parents, bad for kids, and bad for the economy. 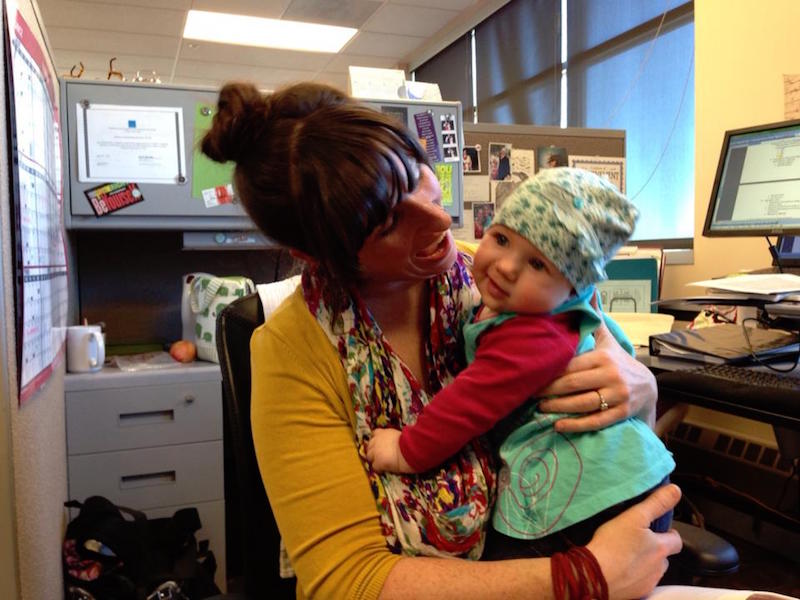 My four-month-old daughter Clementine and me at my desk.

We’ve been hearing a lot about family-friendly parental leave and childcare policies from the Clinton campaign and now even the Trump campaign. The policies suggested by the candidates are very different. Hillary Clinton says her administration would set up universal preschool for every 4-year-old, guarantee 12 weeks of parental leave at two-thirds of parents’ normal wages, and double the country’s investment in Head Start. Donald Trump says he would let parents deduct childcare expenses from their income taxes for up to four kids. Both plans have their critics: Detractors of Clinton’s plan say that government-funded daycare doesn’t always improve outcomes for kids, and Trump’s plan is seen as too narrow, inadequately funded, and unlikely to help the low-income families, same-sex couples, and single moms that need help affording childcare. Despite these major drawbacks, it’s great to see the issues of family leave and childcare being highlighted on a national level. Paid parental leave and childcare access have been on feminists’ radars for a long time, but they’ve often taken a backseat to other issues in national politics. The leaders of the major parties have not seen family leave as a crucial issue, despite the fact that they are necessary to keep women in the workforce and equal access to high-quality childcare reduces social and economic inequalities into adulthood. It’s unusual and heartening to see these issues take political center stage for both parties in an election year.

So here’s the question: What would excellent parental leave and childcare policies look like? What policies should our future president push for? 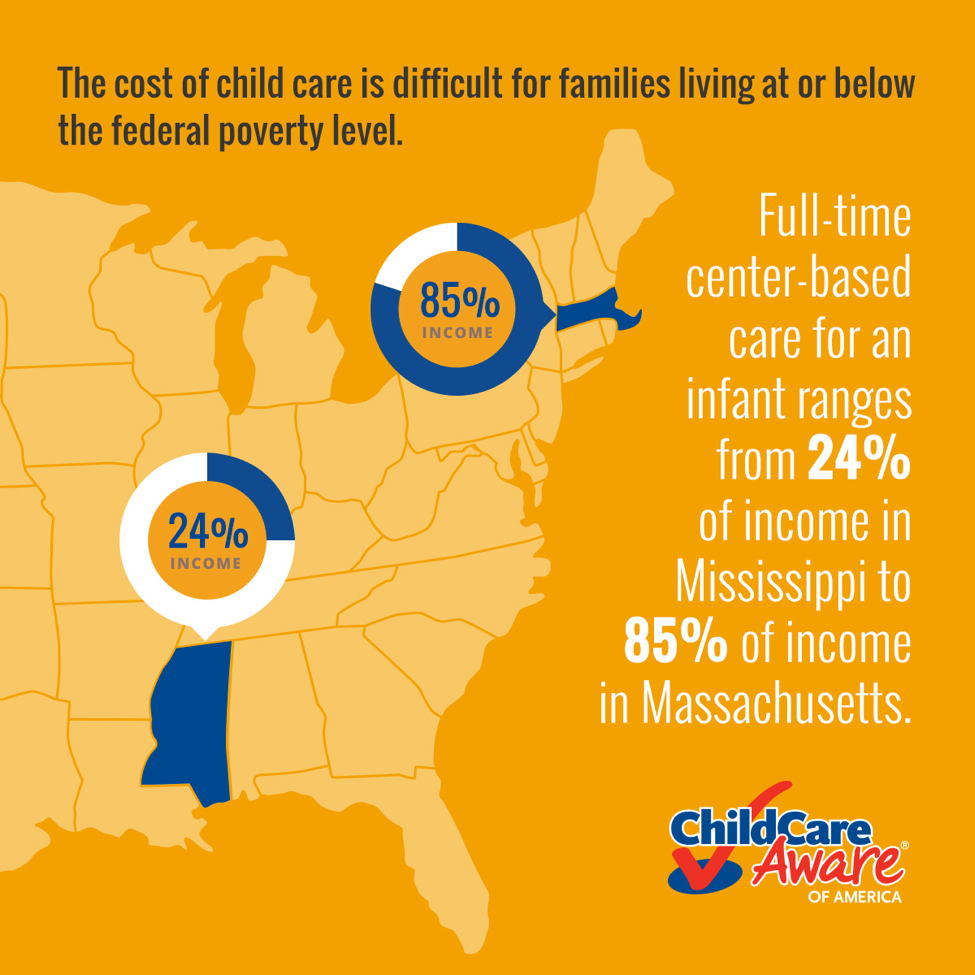 There’s a lot of media coverage and hand-wringing, rightly so, about the problems with the current parental leave and childcare systems. For example, the United States is still the only wealthy nation that doesn’t have a federal provision for paid parental leave, and childcare, which is often low quality, in part due to low wages for staff, costs more than in-state college tuition in 31 states. But we hear less about the good these systems could do, and still less on concrete policy reforms that could actually do the fixing. Also, it’s important to note that while parents (myself included) often lament the high cost of childcare, it’s expensive for a good reason: The people taking care of our kids should have lots of training and childcare environments should be safe places for kids to learn and play. The real-life consequences of having unregulated childcare providers—as seen in the 2013 tragedy in an unlicensed Texas daycare—are often ignored.

Economic and family-friendly policy experts have some ideas. They’ve looked at research on the economic and social benefits of high-quality, affordable early childhood care and education, and they’ve drafted policy recommendations that would allow us to reap those benefits.

Perhaps the most comprehensive recommendations are outlined by the Economic Policy Institute (EPI), a nonpartisan think tank that focuses on the economic policy needs of low- and middle-income families. They emphasize that there are compelling, evidence-based reasons to significantly change the current systems: High-quality, affordable early childhood care and education helps to close achievement gaps between children of different income classes and of different races and ethnicities, it reduces involvement with the criminal justice system, it boosts women’s labor force participation, and eventually, when the children grow up, it increases worker productivity and stimulates national economic growth. Clearly, this is an issue that has wide-reaching implications not just for parents, but for the social and economic health of the nation as a whole.

In order to realize these outcomes, according to the EPI report, we need to do several things. We need to increase funding for home visits by trained nurses before and just after the arrival of an infant; provide resources directly to families to help them afford early childcare and prekindergarten education, which will also boost parental labor force participation; and ensure that caregivers are paid salaries and offered professional development opportunities that match K-12 teachers, who have similar skills and credentials. This last policy change would have a particularly strong impact on women of color, who are disproportionately employed in low-wage, unstable early childhood caregiver jobs. According to EPI, “There are many models of successful widespread implementation of these types of investments, and research clearly demonstrates such investments would provide high societal returns. American productivity would improve with a better-educated and healthier future workforce, inequality would be immediately reduced as resources to provide quality childcare are progressively made available to families with children, and the next generation would benefit from a more level playing field that allows for real equality of opportunity.” 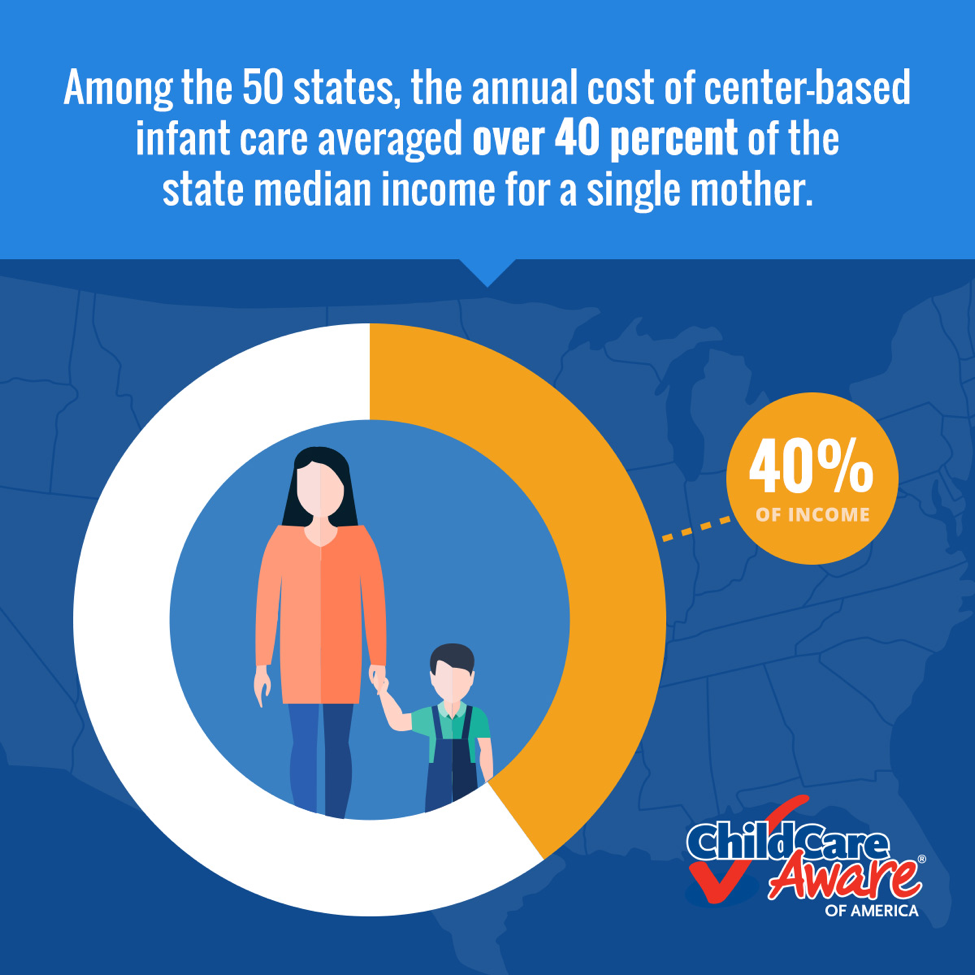 The media’s tendency to frame this as a purely economic problem disguises the ways race, gender, and class intersect to create unequal access to safe and affordable childcare. Many policy experts agree that access to childcare is a problem that is rooted in and perpetuates racial and gender inequities. As the Ms. Foundation for Women’s report Raising Our Nation: Forging a More Robust and Equitable Childcare System in America asserts, “Racial politics and racist administrative practices have held back efforts to develop a more expansive and equitable system of childcare in the U.S. So, too, has opposition to shifting gender norms. In 21st century America, transforming the childcare system goes hand-in-hand with embracing values of racial and gender equality.” And although the details of recommendations vary slightly by organization, policy experts also agree that in order to address these inequities and make our childcare systems work better for parents, kids, and the nation, we need to do three things: make childcare more affordable and accessible, improve job quality for childcare workers, and improve the quality of the childcare itself.

National and state-level advocacy organizations like the National Partnership for Women & Families and Oregon’s The Mother PAC also emphasize the need for policy reforms that affect childcare access, like closing the wage gap, establishing fair work-scheduling standards, and separating healthcare access from employment. Hillary Clinton’s childcare platform—which, contrary to Trump’s assertion, has been posted on her website since February—closely follows the evidence-based recommendations laid out by EPI and other policy experts. In an open letter to working moms, Clinton also promised to close the wage gap and expand access to healthcare. Whatever you think of Clinton, there’s no question that she has developed an expansive plan that aligns with progressive policy experts who have a positive vision for the nation’s childcare systems.

While we wait, perhaps for a long time yet, for our slow-moving government systems to enact these crucial changes, businesses can step in to provide stopgaps like employer-paid parental leave or, less optimally, options like the one my former employer offered that allowed me to bring my baby to work. Many large businesses in the last several years have started offering paid parental leave, including Netflix, with their buzzed-about unlimited leave for salaried employees in the year following a child’s birth or adoption. Allowing babies in the workplace is not yet common, but it is being done successfully, as my experience proves. According to the Parenting in the Workplace Institute, at least 176 U.S. companies allow it. Other companies don’t allow babies, but do allow school-age children to come to work. This is especially useful for after-school care, school closures due to weather, and child illnesses.

Whether we advocate for policy reforms or push our employers to implement better policies, one things is clear: Childcare is a reproductive justice issue. Inequalities among different communities mean that some children have access to high-quality early childhood care and education, and others do not. We can’t let the current situation continue for the next four years.

I don’t have a child, but on behalf of my parent friends who are working and have to make special arrangements, I was...