"Kiki" Picks Up Where "Paris is Burning" Left Off | Bitch Media

“Kiki” Picks Up Where “Paris is Burning” Left Off 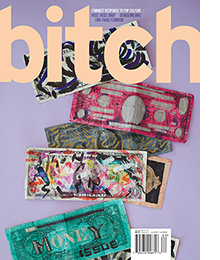 A lot has changed since Paris Is Burning, the 1990 cult classic that documented the LGBTQ underground “ball” culture of 1980s New York City and allowed Madonna to bring vogueing to the masses. In Kiki, filmmaker Sara Jordenö and producer Twiggy Pucci Garçon revisit the ballroom scene—a movement that thrives primarily in inner-city communities of color—decades later. The moves may be familiar now, mainstreamed via YouTube videos and episodes of So You Think You Can Dance? but traditions remain: At balls, you compete (or “walk”) for fame and prizes; “houses” refer to your chosen family (are you in the House of Pucci or the House of Unbothered Cartier?) and are guided by the firm hand of a house parent (usually a matriarch). The ball system establishes a framework for expression, collaboration, and community, but it’s also been shamelessly co-opted, with little recognition of its radical roots. If you’ve ever heard or said the word “realness” in modern parlance, you can credit ball culture.

Kiki follows house matriarchs Chi Chi Mizrahi and Gia Marie Love, as well as Garçon, as they mentor a new generation of stars—not just in dancing, walking, and throwing shade but in connecting their lives as LGBTQ people to struggles for social justice in the larger world. Former debate champion Love injects compassion and insight into conversations about sex-workers’ rights, at one point delivering an impassioned plea to those who championed gay marriage, urging them to champion their marginalized brothers and sisters as well. Elsewhere, Jordenö highlights the contrast between the comfortably middle-class ball attendees and the dancers—some of whom are homeless, hustling, and struggling to thrive outside the clubs.

Though queer people of color are more and more visible in film—from 2011’s Pariah to 2015’s Independent Spirit Award–winning Tangerine—they remain underrepresented in the mainstream, making Kiki just as crucial as its older sister was in 1990. With its frank, moving storytelling and determination to bear witness to deep social fissures, the film is destined to secure a position on top-ten lists of gaymous cinema.

Read This Next: As Hollywood Turns Its Eyes to Cuba, Will the Island Be More Than Just a Prop?
Read This Next: Five Documentaries to Watch for Women's History Month (or any month)