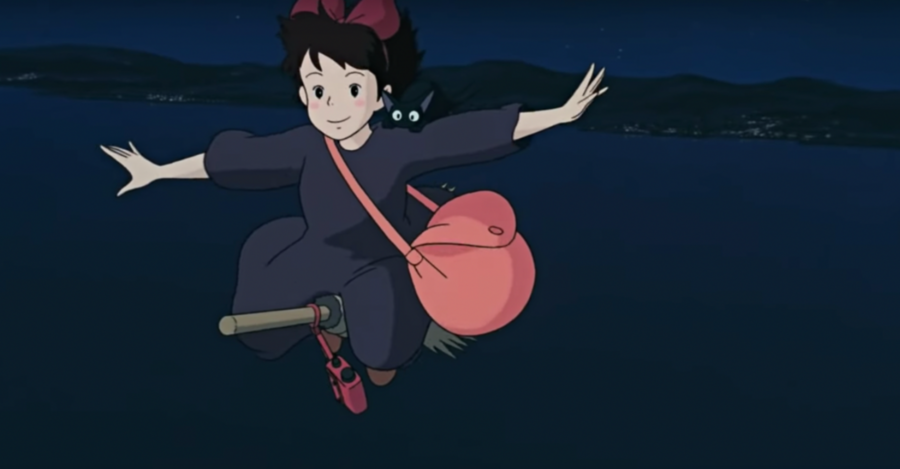 Thirty years ago, Japanese animator Hayao Miyazaki painted the world of Kiki’s Deliv­ery Ser­vice, an animated film based on the 1985 novel by Japanese author Eiko Kadono. Kiki is a whimsical, self-serious character who, at the age of 13 and under a full moon, leaves her small town to embark on a yearlong journey of witch training alongside her black cat, Jiji. She finds herself in a floating town on the ocean, makes a home in a bakery, and befriends Osono, the bakery’s pregnant owner.

In a show of independence, Kiki decides to become a courier, delivering goods by broomstick, but soon finds herself drowning in her new role as an entrepreneur, the fire in her dimming as she forgets about herself to serve others. Her fear and thoughts of self-doubt accumulate, with grave results: Her magical powers wane along with her sense of self. In fighting to regain what she has lost, Kiki learns the value of sisterhood, balance, and rediscovering her own magic. The timeless tale, beloved by so many women today, frames the history and rituals of witchcraft and the dogma of feminism within the young and fiery Kiki.

When Clare Reynders, a feminist and witch, rewatched Kiki’s Delivery Service for the first time since moving into her New York apartment earlier this year, it left her sobbing. She saw herself in the teen witch figuring out her next move, in a foreign city, buoyed by female friendship. Suddenly, Reynders didn’t feel so lost in her new home. Reynders isn’t alone: For many young women coming of age, Kiki’s story feels familiar: Like her, they are in awe of a world that not only creates space for women to use their powers for good, but to learn about themselves and their place in the world.

As Pam Grossman writes in her recently published book, Waking the Witch: Reflections on Women, Magic, and Power, “The teen witch is an avatar of the miseries, insecurities, and strange proclivities that so many of us keep knotted within as we navigate our young lives.” Grossman, who hosts the podcast The Witch Wave, points out that Kiki’s Delivery Service mirrors the empowering sisterhood that’s both heavily present and vital in 21st-century witchcraft communities, and contrasts it to previous teen-witch narratives. She notes that in the 1996 film The Craft, “[T]he women aren’t very nice to each other…. They actually end up turning on each other, and it gives this idea that women can’t be friends. The mean-girl trope can be so damaging when [really] sisterhood is such an empowering element to so many of us in real life, especially in the witchcraft community.”

One such illustration of the sisterhood portrayed in Kiki’s Delivery Service is that the teenage witch’s magical powers lead her to the artist Ursula, who has words of wisdom: “We each need to find our own inspiration, Kiki. Sometimes it’s not easy.” Along with Osono, Ursula provides the support that Kiki needs to maintain her magic. Like witchcraft itself, the film centers on the bonds between women. Though the male savior remains a common trope in coming-of-age movies—girl meets boy, girl falls in love with boy, boy makes girl’s life better—it’s women whom Kiki can trust as she learns about herself and rediscovers her strength. This is especially notable given that the film was released at a time when Disney films like The Little Mermaid and Sleeping Beauty were influencing girls’ ideas about love: Kiki’s Delivery Services liberated itself from the generational misogyny that has oppressed women in general, and women practicing witchcraft in particular.

It’s precisely because witchcraft itself was a rebellion against male dominance that the figure of the witch has been demonized throughout history. David Dean, a historian and professor at Canada’s Carleton University, notes that in Scottish witchcraft cases of the 16th century, young women were considered a threat to society. From the perspective of men, he says, “A female world was a hidden world.” The hysteria and fear that flourished during the Reformation landed hard on nonconforming women, leading to wide-ranging accusations of witchcraft and the demonizing popular imagery of the 16th and 17th centuries that pictured them as old hags who would steal newborn babies and disappear into the shadows.

Writer and illustrator Nina Morales says that it wasn’t until the 1950s that the representation of witches showed some progression, and eventually an acceptance that birthed teen-witch icons like Kiki, Sabrina the Teenage Witch, and even Hermione Granger, as rather than being shamed for their powers, these strong female protagonists get to keep their powers and use them for the greater good. Kiki’s Delivery Service enduring impact makes sense considering that witchcraft is a self-defining practice that has slowly and continually woven itself into the fabric of pop culture. In Waking the Witch, Grossman writes, “The fact that the resurgence of feminism and the popularity of the witch are ascending at the same time is no coincidence: the two are reflections of each other.”

Lisa Marie Basile, a writer and practitioner of witchcraft, agrees, telling me, “I really think we’re reaching a tipping point in society [with] women, trans women, and nonbinary people in general, because I think of the witch as an other. We’ve come to a place where we want to be more than what we’re supposed to be or taught to be. We want to be smart, we want to be slutty, we want to make money, we want to go off the grid. We want to be all the facets of ourselves that we are told we can’t be because it’s wrong or unethical or dirty or a man’s job.”

For music journalist Konstantina Buhalis, Kiki’s Delivery Service carries nostalgic memories. She recalls that “As a young woman, [the film] became this symbol of persistence and being able to make choices in your life, regardless of what may be the social norm at the moment.” For Morales, it represented freedom during a difficult period when, after graduating college, she fell into a depression that lasted three years. “Consuming magical-girl films like Kiki’s Delivery Service was kind of what sparked something in me, and was a big motivator to pursue my own passion.”

Witches have become part of women’s coming-of-age narratives. As Reynders notes, when you’re a teen girl you feel like you’re the least powerful person in the world. “Instead of fearing the witch, instead of not wanting to end up like ‘the old hag,’ [girls] start seeing witches as somebody they want to be,” says Morales. Basile adds that the current popularity of witches is part of a larger hunger to see more multifaceted women in pop culture. “We want to celebrate the person who wants power and growth and love,” she explains, “instead of characters that fill a mold and want to be rescued or weak to [fulfill] some sort of trope.”

Witchcraft, all these women agree, offers women a place where they can be anything and everything on their own terms. In difficult and tumultuous times, women have increasingly turned to witchcraft practices, whether it’s looking into astrology, reading Tarot cards, and crafting potions. The radical nature of witchcraft gives young women access to rebellion against the limits of patriarchy, and though the marketing of witchcraft can make it feel exploitative, it also makes it more accessible to the curious teen girl wondering about her place in the world. Perhaps, Kiki’s Delivery Service offers the same opportunity: a safe space for women to access power—but even more importantly, a connection with ourselves alongside a community of women.

by Dianca London Potts
Sabrina is a force to be reckoned with.
by Christine Jean-Baptiste
View profile »

She covers everything and anything within the arts and culture space, including but not limited to wellness, identity, film, women’s issues, systemic racism, and sustainable fashion.