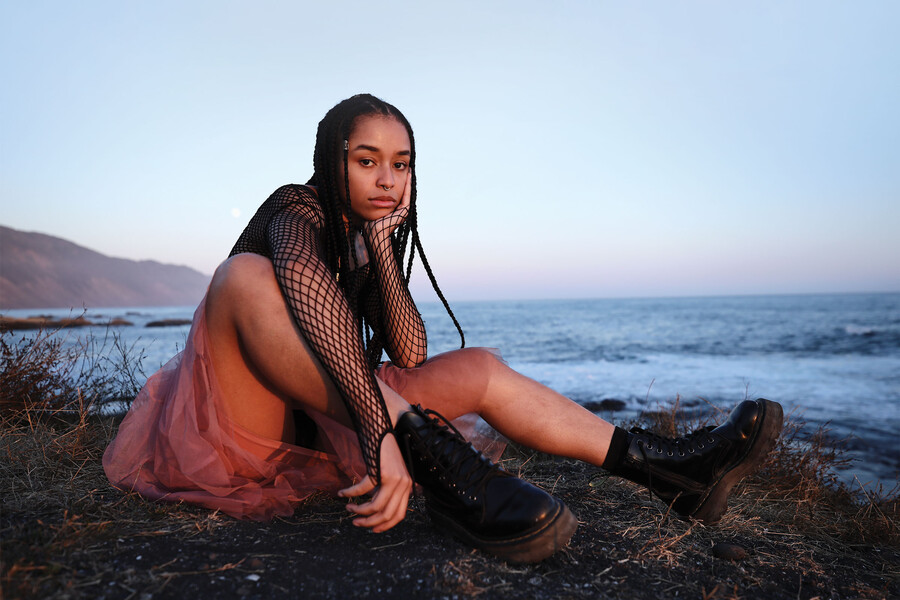 This article was published in Wild Issue #92 | Fall/Winter 2021 Subscribe »
In their January 2021 cover of Erykah Badu’s “Green Eyes,” Isis Brown, a.k.a. King Isis, demands our attention. The timbre of their voice is piercing, encompassing the emotion and vocal control that’s required to perform a Badu classic. The level of intensity they bring to the song is impressive yet fitting, considering Badu’s music was often a source of healing for King Isis as they battled anxiety. “Music has definitely been a safe haven for me [during] my struggles with mental health,” King Isis tells Bitch. “It has definitely been a [way for me to escape] those anxieties, fears, and dark thoughts. Music has been there for me even when I couldn’t be there for myself.”
King Isis sounds as if they’ve been in the industry for years, but the 24-year-old only began releasing music under their current stage name in 2020. Their debut ep, #1, the first of a three-part series, was released on June 25, 2021, and paints a brooding story of healing and the quest for self-discovery. King Isis plans to continue that theme of introspection on the second and third installments of the project, which they hope to release in September 2021 and October 2021, respectively. Originally from Oakland, California, and now attempting to find themselves through sound exploration in Los Angeles, they hope to inspire others to embark on their own journeys of self-discovery. Bitch talked to King Isis about releasing their debut project during a pandemic, growing up in Oakland, and the healing power of music.

From its ties to the Black Panther Party to being the hometown of many legendary artists, Oakland has a rich culture. What was it like growing up in that?
There’s a rich music and cultural history here. Just being surrounded by all the creativity in Oakland impacted how I feel about music. Oakland is kind of a small town. It’s a city, but it has smaller-town energy, especially within the creative community. It’s very close knit. Everybody knows each other or knows somebody who knows somebody, and everybody’s very supportive. It’s definitely changed within the past eight to 10 years because of gentrification, but growing up, the big art community was very supportive.
Was music always something you wanted to pursue?
I always wanted to make music, even if I’m not [performing it] on stage. Music is super powerful and super important in transforming individuals and communities. My music has helped me feel free in myself, [understand that it’s okay to not be] okay all the time, and explore the parts of me that I’ve suppressed. I feel whole and connected to myself, and that’s the energy I’m carrying into the music. I’m hoping that when people hear some of my songs, they can hear that as well.
#1 is the first in a three-part series. Why’d you decide to break up your releases in that way?
Music is very fluid for me. It doesn’t really sit in one specific sound. Before the pandemic, I was having a hard time trying to figure out how I was going to release these songs that sounded hella different from each other in one project and [still] make it sound cohesive. So I decided to break it up into three parts that are separated by sound. The first ep is alternative r&b, the second one is more alt-rock, and the third one is more stripped down [with an] acoustic guitar. [The full project tells a complete story about] sitting with yourself and doing the work to find yourself. [Through recording], I’ve learned that I definitely need to take time to just breathe and write things out in song form or through journaling. I just need to let things out of my head, let things go, not be so attached to stuff, and connect with different sounds across different genres.
You traverse genres pretty effortlessly. How has that experience been? Have you faced pushback from record executives?
People [expect] the majority of Black women artists [to sing] r&b, but we’re all hella complex and don’t really fit in any box. My music doesn’t sit in any specific genre. The second ep is very much a different sound than the first. This [first] ep is the most on brand and expected, so it hasn’t really provoked anything. But it does come up in conversations, and I’ve definitely severed some relationships with people who were trying to [pigeonhole me] in a specific sound or box. I think it’s definitely going to be easier or more palatable to a wider audience now because of people like Willow and even Young Thug. He did a show with a whole rock band on NPR Music, so [music that doesn’t fit neatly in one genre is] definitely becoming more mainstream.
You embrace fluidity outside of music too.
I consider myself genderfluid. I present as femme, but I reject the boundaries that gender presents in our society. It wasn’t until college that I was able to even see gender and identity in a different way. It just wasn’t an option [when I was] growing up. I wasn’t around people who thought like that. This whole project is also about a queer relationship and [is helping me] become comfortable with aspects of myself that I was rejecting and suppressing. The music I make and how I present myself embody not really giving a fuck about other people’s standards or ideas of what you should be. That’s something I want listeners to be able to see and hear.
This interview has been edited and condensed for clarity and length. 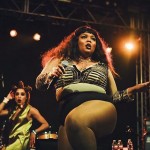