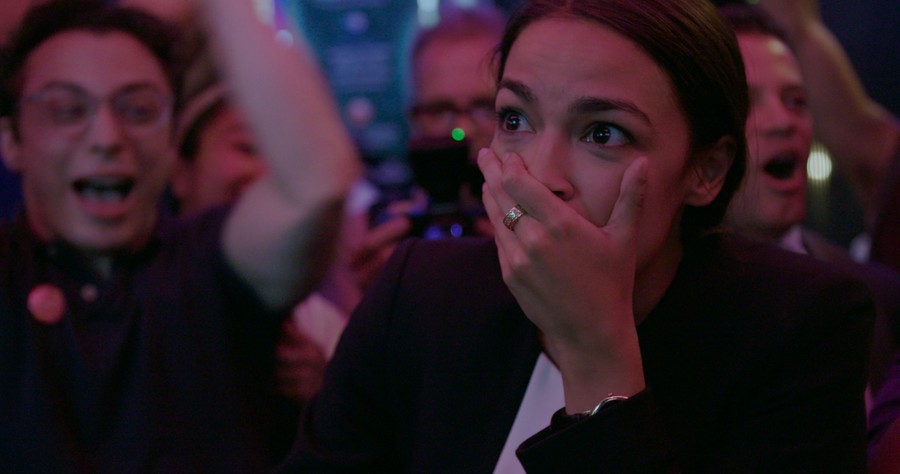 Alexandria Ocasio-Cortez in Knock Down the House (Netflix)

“We’re coming out of the belly of the beast kicking and screaming,” Paula Jean Swearengin says in Knock Down the House, Netflix’s recently released documentary about several women who ran for Congress in 2018. Swearengin, the daughter of a West Virginia coal miner, lost so many relatives to black lung disease that she decided to become one of the 255 women who ran for office in the 2018 midterms. Though she lost her bid to unseat Senator Joe Manchin, the mother of four is apart of a wave of women who entered the political arena for the first time.

Filmmaker Rachel Lears had just given birth when Donald Trump was elected president in November 2016. For her, as well as countless others, America’s new political reality was a wake-up call. When she heard about Justice Democrats and Brand New Congress, two organizations that recruit Americans without political experience—and without the backing of corporate money—to run for Congress, “The collective approach of it drew me. I was curious to see what it would look like to have people from different walks of life coming together to find common ground, in order to push the country forward.”

Knock Down the House, which began as a grassroots project, emerged from Lears’s curiosity. She and her husband, Robin Blotnick, along with their newborn, traveled the country to follow the journeys of four women: Alexandria Ocasio-Cortez of New York, Amy Vilela of Nevada, Cori Bush of Missouri, and Swearengin. Lears was particularly interested in races where political outsiders challenged established candidates, noting that, “Each of these women was taking their adversities, loses, and pains and making the connection between personal experiences and failing policies. They were finding their voices as we shot.” Though Lears knew there was a good chance that most, if not all, the women would lose their elections, that didn’t impact how she approached the documentary. “No matter who won, I wanted to explore the nature of power the women brought in,” she says.

Ocasio-Cortez was, ultimately, the only candidate to win her election, but campaigning helped Bush, Swearengin, and Vilela discover their political power. “I was not trying to become an activist. I live six minutes away from Ferguson,” Bush asserts in the documentary. “I took to the streets to lend a hand as a nurse. I wanted to see justice happen. It didn’t happen, so I just kept going back, again and again.” Frustrated with Congressman William Lacy Clay’s neglect of St. Louis’ Black community, Bush ran on a progressive platform that included ending poverty, reducing crime, and fighting mass incarceration.

Vilela, who grew up with a single mother who received WIC, Medicaid, and food stamps, decided to run against Steven Hersford after her daughter died from a pulmonary embolism that could have been prevented had doctors provided care without proof of insurance. Medicare for All was the linchpin of Vilela’s platform, which led some critics to label her a Marxist. “I don’t even know what that is,” she confesses to Lears in Knock Down the House. She just wanted to ensure that no other parents lose their child the way that she did. “I am not going to let my daughter have died for nothing,” she says through tears. “Now that my eyes are open, I cannot and I will not close them again.”

“How do you brace yourself for something you don’t know is coming?” asks Ocasio-Cortez in the film. That’s the question that several organizations are attempting to answer as they provide resources to women candidates who are running for the first time. “My immediate thought after the 2016 elections was: How can I enable this national and global connectedness online to help progressive women who are running around the country?” says Lily Herman. After volunteering for the Mainers United for Marriage campaign in 2012, Barack Obama’s 2012 campaign, and Hillary Clinton’s 2016 presidential campaign, Herman realized how few resources are dedicated to helping women candidates get press, organize data, build interactive websites, and foster strong social-media presences.

In 2017, Herman founded Get Her Elected, an initiative that connects volunteers with progressive women candidates. So far, Get Her Elected has worked with more than 350 progressive women candidates—between 50 and 60 of whom have won their races. After 2016, Herman notes, “Women realized that the system was not going to change and progress unless they themselves took the power into their own hands,” a line of thinking that further manifested in movements like #MeToo and Time’s Up. “We can’t talk about the phenomenal showing of women in 2018 without looking back to 2016,” says Emily Cain, the executive director of EMILY’s List, an organization that since 1985 has recruited and trained pro-choice women candidates. “The defeat of Clinton for the presidency was shocking to many women, but out of that rose a generation of activists who decided that they were ready to bring their talents to solve the problems that communities and this nation faces.”

“I have won five elections and lost two. Winning is definitely better!” says Cain. But, she adds, “The day after a loss can be clarifying—you are reminded of why you ran in the first place. You didn’t run for the title or the office, you ran to make a difference for the people and issues you care about,” Cain says. “All of the women who run, regardless of the outcome of their race, have mountains of political knowledge and experience,” adds Herman. In addition to the organizations already mentioned, Higher Heights for America, IGNITE, and Victory Institute have been actively invested in making America’s political machinery more just and inclusive, opening the doors for candidates like Ocasio-Cortez, a determined bartender from the Bronx who took on 10-term incumbent Joe Crowley.

Ocasio-Cortez orchestrated an elaborate grassroots campaign that took her door-to-door, convincing the people of the Bronx and Queens of the importance of electing someone who drinks the same water, goes to the same schools, and walks the same streets. “People always ask me why I think I can do this,” she says in the documentary. “I say it’s because the alternative is no one.” In her trademark vérité style, Lears’s camera quietly follows Ocasio-Cortez as she transforms from a “scrappy little fighter from the Bronx” into a formidable public speaker and politician. The camera frames her face as she looks around, sometimes nervous but never cowering from a man who hadn’t been challenged in 14 years. “If I was a normal rational person, I would’ve dropped out of this race long ago,” she says. But she doesn’t, and in what some political analysts called one of the biggest upsets in recent American political history, she earned 75 percent of the primary vote.

Ocasio-Cortez orchestrated an elaborate grassroots campaign that took her door-to-door, convincing the people of the Bronx and Queens of the importance of electing someone who drinks the same water, goes to the same schools, and walks the same streets.

Knock Down the House is clear-eyed about the tremendous amount of work that goes into running a campaign. In extremely moving scenes, candidates speak about their families, parents, partners, and campaign teams who tirelessly continue to support their fights. “When EMILY’s List supports a candidate, we support them for their wins and the losses, the highs and the lows. We believe in having real conversations with our candidates and advising them on the whole journey. For some, that means figuring out the right approach for next time, and for others, that might be deciding to look at other seats or opportunities to make an impact,” Cain says.

Knock Down the House also emphasizes that what Cain calls a “sea change” in the number of first-time women candidates needs as much documentation as possible in order to show and tell us that it’s possible. In 2017, filmmakers Hannah Rosenzweig, Wendy Sachs, and Tanya Selvaratnam were inspired to make the film Surge in order to record an unprecedented number of such candidates. The as-yet unreleased film documents the exhilarating journeys of three congressional candidates—Jana Lynne Sanchez of Texas, Lauren Underwood of Illinois, and Liz Watson of Indiana. “There can never be too many of [these] films,” Rosenzweig says, calling Surge and others “part of a zeitgeist of art and storytelling that is actively changing the way our country views women in politics and leadership.”

Cain agrees. “Electing more women is the best and fastest way to change aspirations for women and girls across our country. When you see someone who looks like you or who comes from where you come from in office, you can see yourself there.” Herman too agrees, but also acknowledges that it’s going to take a long time to achieve gender parity in politics. “We need to make sure there are more permanent structures and resources in place to help women who decide to run, instead of relying solely on grassroots efforts like mine,” she says. “We need larger cultural shifts in how we perceive women leaders and leadership in general.” The road is long and needs repairs, but as Swearengin sums it up best: “It’s time for ordinary people to do extraordinary things. Let’s raise some hell and take our lives back.”