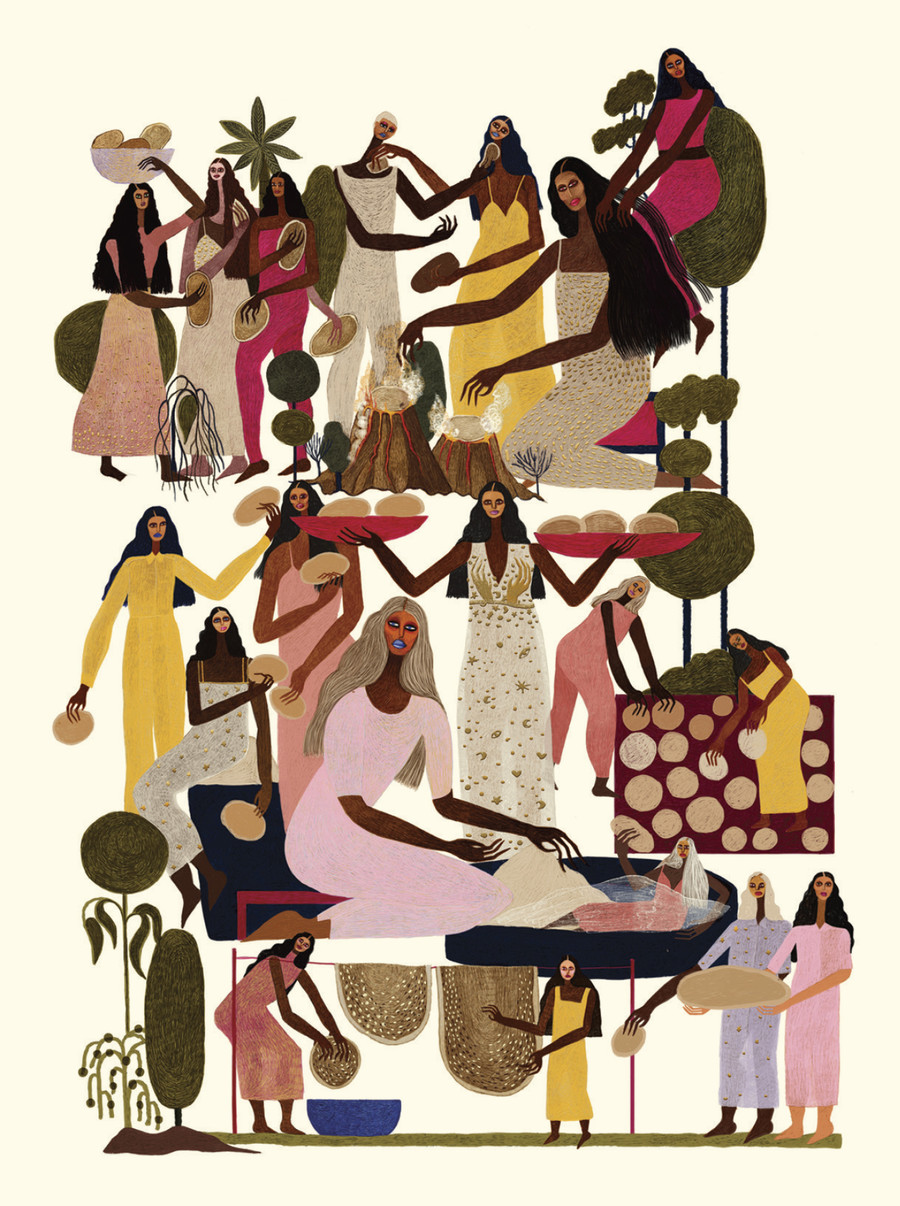 Shared Bread, an ongoing series of images celebrating the spirit of paying it forward and sharing (Illustration by Manuja Waldia)

Konkani was my first language. I grew into it at my mother’s breast, and lost it away from her. My mother cooed to me, fashioned a song: “Zai zai zai, Adit maka zai. Love love love.” It disappeared slowly, eroded by life in colonized lands, deprecated by English. When I was 7 years old, living in St. Louis, my friend’s father asked me my mother tongue. I never knew the name of the language we spoke at home other than our own word for it, “Amchigele,” which I later learned was an affectionate term (“our language”) perhaps used by the Konkanis who fled Goa to escape the Portuguese Inquisition. My friend’s father had never heard of Amchigele.

Goa is a little nugget of land in India between the large states of Maharashtra and Karnataka. The Portuguese conquered its taluks in the first half of the 16th century, and ruled what they called their “Old Conquests” for longer than the British ruled India. For more than four centuries, until 1961, the Portuguese violently proselytized; those who did not convert, like my ancestors, were forced to leave. Those who did convert were heavily policed. The Goan Inquisition, perpetuated by the Roman Catholic church, was established in 1560 and put around 16,000 people on trial—but we will never know for certain the exact numbers, the demographics of those tried, or their punishments because all documentation was burned when the Inquisition ended in 1820.

Muslims were once an integral part of Goa—through Arab trade; through the intermittent rule of Delhi Sultanate, the Bahmani Sultans, Adil Shah—until the Portuguese invasion. They constituted less than 1 percent of the population when the Portuguese left. A 1569 royal letter in the Portuguese archives indicates that all Hindu temples in Indian colonies were burned and razed to the ground. Imprisonment, executions, and public flogging were common; books in Konkani, Sanskrit, or Marathi were burned. Konkani was banned; and property confiscated. Voltaire said of the Inquisition: “The Portuguese monks made us believe that the people worshiped the devil, and it is they who have served him.”

When I returned to India for secondary school, I became fluent in northern languages like Hindi and Gujarati. Hindi is the highly Sanskritized register of the Hindustani language; Gujarati, a language descended from Old Gujarati, might be as young as 700 years old. My fluency in Gujarati grew colloquially, while Konkani became a private language between my mother and me, though I was hardly verbal in it. I mostly listened, and when I heard other relatives speak Konkani during rare visits, their accents sounded strange, alien. A debate teacher at school mocked me for not reading any Konkani books—blaming me, personally, for letting my mother tongue die. Portugal’s 1820 Liberal Revolution—and subsequent new constitution—allowed the heretofore-banned Konkani to thrive in Goa once again, and aggressive proselytizing policies were relaxed in some places. (The Portuguese Christian government continued to tax the Hindus and Muslims.)

The Portuguese left traces of ghostlike linguistic remnants throughout modern Goan Konkani. While the Portuguese were said to have destroyed all Konkani works in 1548, the Jesuits established the first printing press in all of Asia in Goa in 1556. Jesuits in the mid–16th century wrote down Konkani versions of the Mahabharata and Ramayana in Roman script, and the Portuguese took them back—three manuscripts were preserved in a Braga, Portugal, library until Mariano Saldanha discovered them in 1950. These were later turned into the Adi Parva, the first of the 18-book epic in Roman script. A Konkani Bible was published in 1808, and the first Konkani school was started by the Portuguese in 1932. In the 20th century, India underwent a rearrangement along linguistic lines, and a debate about whether Konkani was an independent language or a dialect of Marathi formed the basis of a geopolitical power play to subsume Goa into Maharashtra after Goa’s annexation to India in 1961.

The very act of speaking it is revolutionary, rejuvenating, even.

The latter half of the 1980s saw a fight for Konkani to become the official language of the state, which it won. The Sahitya Academy in New Delhi declared Konkani a fully fledged language, thus paving the way for the 1992 decision to constitutionally establish Konkani as an Eighth Schedule language, making it one of India’s official languages. Konkani is, as some linguists surmise, a Prakrit—an Indo-Aryan language dating back to at least 1187, to its first inscription in Bombay, though experts debate whether an earlier inscription on Shravanabelagola in 981 CE is Konkani or Marathi. But it is a southern Indo-Aryan language, and retains elements of Proto-Dravidian language structures, as well as similarities to eastern and Western Indo-Aryan languages. It is a complex language that travels with its displaced speakers; just as Goa’s coastal location opened it up to attack and trade, linguistic exodus is endemic.

In 1882, Angelus Francis Xavier Maffei, an Italian Jesuit and scholar of Konkani, described it as “far more perfect than many European languages” yet “altogether uncultivated,” which is possibly how all colonizers feel about cultures they visit devastation upon. Maffei faulted the Hindus who spoke Konkani for not incorporating as “many Portuguese words as the Christians.” Even then Konkani was blighted, as Maffei called it, an “ignoble state,” which he attributed to its lack of a common written language and its “corruption” by foreign words borrowed from Portuguese and English. Maffei’s confidence in the superiority of adopting European words into Konkani—additions that he believed made “Natives” despise it as a “good-for-nothing” language—was at odds with the Hindu route of adopting vocabulary from Indo-Aryan languages.

In Goa, the train passes by and sometimes through the Western Ghats, a long, continuous mountain range that travels down six states—from Gujarat, where I went to secondary school, to the very southern tip of India, where I have never been. I first visited Goa when I was 12, and expected to find a feeling of homecoming in this beautiful beach state where locals flocked for short vacations and foreigners for infamous hedonism. I found myself in my ancestral village outside of Mangalore a few years ago, and had to rehearse my first sentence before I spoke to my distant relatives. Konkani is a split tongue; you can even tell the religion of the speaker by the intonation (Hindus speak with a “rising contour” while Christians speak with a “falling contour”). It has five written scripts: Roman, Kannada, Malayalam, Perso-Arabic, and Devanagari.

If it borrows words from European languages, it is “corrupted”; if it borrows words from Sanskrit, it is Brahmanized; if it uses Kannada or Malayalam, it is Dravidized. It is a language undergoing constant stress and reinvention. It is a heat map informed by movement. Though the last Konkani newspaper folded three years ago, there are still plays written and performed in the Goan “tiatr” theater tradition. A Konkani book won the Sahitya Akademi Award last year, and there’s a Konkani translation of “Despacito” on YouTube. Konkani has nearly 13 million speakers and a growing diaspora continuing the tradition of migrant language. The very act of speaking it is revolutionary, rejuvenating, even—at least it would be for me, out in the diaspora. But I have lost it; it has fallen out of my mouth. My mother tongue —a ghost.

Read this Next: Bad Mouths 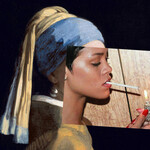 by Rachel Klein
Many of us think of washing someone’s mouth out with soap as an outdated punishment for ill-tempered children, but for a long time it was also commonplace as a corrective for women.