“Norman Fucking Rockwell!” Is a Case Study in Political Apathy 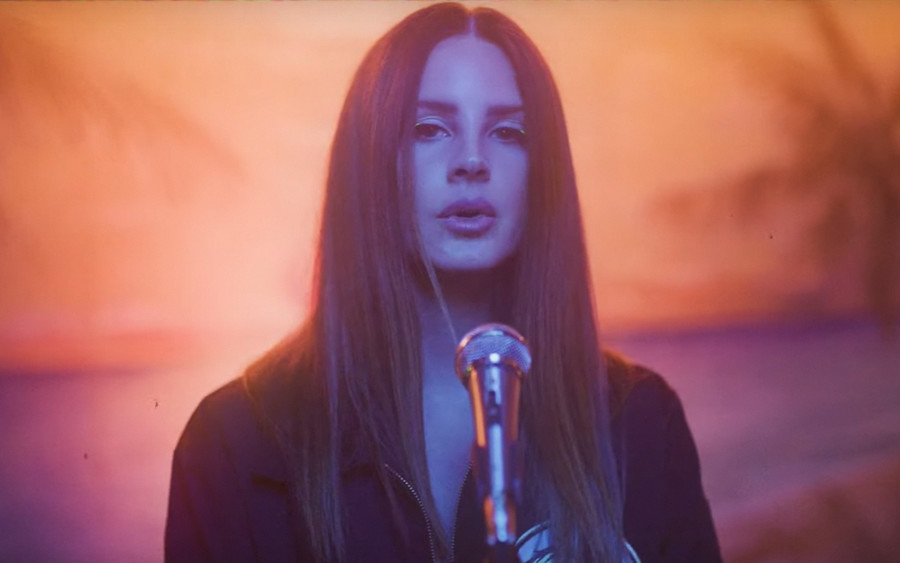 On the cover of her sixth studio album, Norman Fucking Rockwell!, Lana Del Rey extends a hand to listeners, her other arm wrapped around actor Duke Nicholson, who keeps her upright as they set sail together. An American flag peeks out from behind Del Rey’s neon-green windbreaker, and in the background, the landscape is on fire; they’re fleeing the destruction and she’s offering us sanctuary. Her cover is more than a metaphor: “L.A.’s in flames, it’s getting hot,” she sings on “The greatest,” a testament to the escapism and romanticism that have been integral to Del Rey’s discography since her self-titled 2010 debut album.

I’d eagerly anticipated NFR! since Del Rey first announced the project last fall. Its first single, “Mariner’s apartment complex,” evoked a quiet strength with an undercurrent of vulnerability; I listened to its swelling strings while walking along the Vancouver Harbour. “Venice Bitch” was released shortly thereafter, a song with a hazy, distorted, electric-guitar solo that boded a psychedelic influence reminiscent of 2014’s Ultraviolence. This unique sound carries over onto other tracks, like “Fuck it I love you” and “The greatest.” The simple piano arrangement of “hope is a dangerous thing for a woman like me to have—but I have it” seemed to indicate that Del Rey was gearing up to release the minimal, acoustic album I’d been waiting for.

But, unfortunately, my excitement was tempered by the artist’s personal politics—or, more specifically, her hands-off approach to confronting them, whether it’s her white-feminist leanings or her defensive and ignorant comments about her later-cancelled performance in Israel. I’ve always connected with Del Rey’s music on an emotional level, but as a racialized, millennial feminist, it’s been tough reconciling my support of her as my political identity has developed. There’s her Old Hollywood aesthetic, which pushes a hyper-traditional image of femininity that values beauty, youth, and submission above all else. She’s also been criticized for glorifying abusive relationships in her music, telling Complex in 2014 that she prefers a “hands-on love” when asked about the link between violence and romance. Unsurprisingly, she previously dismissed feminism because it “was not an interesting concept” to her.

And though Del Rey has avoided speaking about politics altogether, she has leveraged distinctly pro-America imagery, including saturating her videos with nationalist tropes—like the American flag—that center on “freedom.” Del Rey’s music evoked the “American Dream,” and the yearning for an America of days past. Her traditionalism and political apathy even led one right-wing outlet to laud her as a “Conservative Icon.” Her 2017 album, Lust For Life gave me a glimmer of hope: It seemed that the 2016 election had raised Del Rey for the better. After the Harvey Weinstein expose broke, she removed “Cola” from her setlist because she’d written it with him in mind, and affirmed her support for the survivors who came forward.

In a 2017 interview with V magazine, Del Rey told Stevie Nicks that she began paying attention to the news and felt “really present” and less “in her own head” while writing Lust for Life. Given the political landscape, she also became more mindful of her songwriting because she didn’t want to “be a part of anything that adds to that negativity.” She even removed the American flag from her tour imagery because it felt inappropriate to her with Trump as president. With Lust For Life, Del Rey demonstrated that she’s capable of self-reflection and critically examining the world around her. Unfortunately, that album was seemingly the beginning and the end of Del Rey’s political engagement. In a recent interview with the New York Times, she said, “I’m not really more of a liberal than I am a Republican—I’m in the middle.” She’s essentially refusing to pick a side between fascists and progressives, a dangerous position to platform in today’s political climate.

Neutrality in the face of oppression only helps oppressors and prioritizes a single comfort over a collective humanity. Centrist politics beget apathy toward Black and brown people and prioritize moral superiority over real human beings. It shifts the focus from taking a stand against bigots by prioritizing civility and respectability. Now, whenever I listen to her music, her comments hang above my head, conjuring a spectre of a white woman who’s “grateful to be in a country where everyone can have their own political views” while fascists in the United States continue abusing migrant children in concentration camps, debating the legitimacy of trans rights at the Supreme Court, and slowly rolling back protections around reproductive healthcare.

Del Rey’s political cowardice sours NFR! for me; it’s no longer a psychedelic escape but a glaring portrait of white feminism in America. Instead of continuing her criticism of American culture through her music, her perspective has regressed back toward her love life, which involves a relationship with a cop.  Given the namesake of the album, Del Rey’s apathy is especially disappointing. In a 2018 in-depth feature for Artsy, writer Alexxa Gotthardt describes Norman Rockwell as a beloved painter known for his sensitivity, compassion, and three-dimensional humanity. Though his art had universal appeal, he used his platform to raise awareness about the Civil Rights Movement, producing pieces like The Problem We All Live With and New Kids in the Neighborhood.

Following the 1954 Supreme Court decision in Brown v. Board of Education, The Problem We All Live With depicts four Marshals escorting Ruby Bridges, one of the first Black students to desegregate schools in Louisiana, on her way to her new all-white school. In the background is a racial slur spraypainted on a white wall next to tomatoes seemingly thrown in protest. New Kids in the Neighborhood features two sets of children in front of a moving truck. It seems that the Black kids have just moved in, while the resident children, one brown, the others white, are curious about their new neighbors. Though Rockwell advocated for racial justice and religious freedom, Gotthardt notes that “he never overtly addressed equal rights for women or the emerging feminist movement of the 1960s”—one thing he has in common with Del Rey.

Aside from a smattering of references to the counterculture movement of the 1960s and ’70s, Norman Fucking Rockwell! appears to have little to no meaningful connection to its namesake’s work. I hoped that in naming it after him, Del Rey would follow his example and use her art to continue critiquing the current political climate and advocate against the president she apparently hexed. When Vanity Fair asked her about the title, she explained, “It was kind of an exclamation mark: so this is the American dream right now. This is where we’re at—Norman fucking Rockwell. We’re going to go to Mars, and [Donald] Trump is president…” Unfortunately, the title is nothing but a “slight reference” to the “chaos of the culture” that she and producer Jack Antonoff find so amusing. It’s an empty gesture.

While NFR! is indeed a beautiful demonstration of Del Rey’s storytelling abilities and vocal talent, it’s hard to ignore her apparent apathy toward marginalized communities.

Though her perspective regressed after Lust For Life, Del Rey recently demonstrated that she’s willing to use her art for good. After back-to-back mass shootings in Dayton, Ohio, and El Paso, Texas, this summer, she released “Looking For America” as a standalone single and donated the proceeds to the respective relief funds supporting victims. “I’m still looking for my own version of America,” she sings on the track, “One without the gun, where the flag can freely fly.” Del Rey obviously has compassion as evidenced by the beautiful and moving nature of her music, but she doesn’t empathize with people who don’t look like her.

Del Rey’s lack of empathy is especially apparent when you look at whose she’s chosen to call out on social media. When Kanye West shared a selfie in which he was sporting a MAGA hat, she commented, “Trump becoming our president was a loss for the country but your support of him is a loss for the culture. I can only assume you relate to his personality on some level. Delusions of grandeur, extreme issues with narcissism.” Azealia Banks criticized her, rightfully calling her out for her “vapid attempts to seem politically aware” by going after a Black man. In response, Del Rey threatened Banks on Twitter, assuring her “I won’t not fuck you the fuck up,” and inviting her to “pull up anytime” to say it to her face. While West and Banks are indeed problematic, it’s telling that Del Rey has only publicly gone after her Black peers (with the exception of music journalist Ann Powers).

Del Rey longs for “her version of America” but it’s clear that the America she’s missing is one where privileged white women didn’t have to worry about politics. “I grew up with Obama and we were happy,” she recently told NME, despite being in her early 20s at the time. “We had gotten to a point where we could focus on music and the arts.” Her ability to ignore social issues like feminism, police brutality, and climate change until Trump’s election is another sign of Del Rey’s inability to grapple with her privilege. The Black Lives Matter movement began in 2013, after George Zimmerman was acquitted for the murder of Trayvon Martin. Meanwhile, in an older interview with Pitchfork, she says, “Under [Obama’s] administration… Everyone I knew felt safe. We were on the up-and-up.” It’s now abundantly clear which group of people she’s referring to.

While NFR! is indeed a beautiful demonstration of Del Rey’s storytelling abilities and vocal talent, it’s hard to ignore her apparent apathy toward marginalized communities. For Black and brown people, politics aren’t just a past-time or a hobby—engaging with social issues is a matter of our very survival. We need an escape from the world burning around us too.

Read this Next: Cruel Bummer 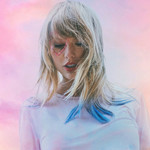 by Melissa A. Fabello PhD
Taylor Swift is turning 30 in December, so it’s no surprise that she’s released an album that feels more authentic and honest than her previous two.