This Land Is Not Your Land | Bitch Media 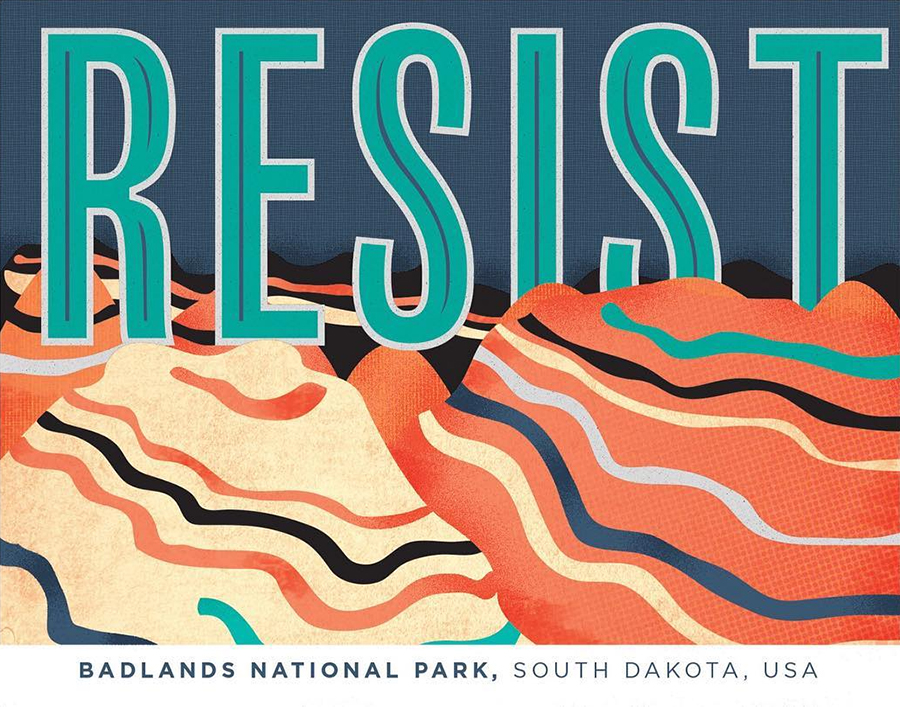 One of the first things I did after the election was go for a walk. Living in Southeast Michigan under the authoritarian leadership of an all-Republican government for the past six years has been overwhelming. We’ve seen numerous draconian laws implemented since Republicans took over, including a law that helped privatize vast portions of public assets. The prospect of facing what is happening in Michigan on the federal level was not just overwhelming, but outright horrifying. I needed to move; I needed to get away. I drove to the nearest park and walked. I walked for well over an hour, until my feet were throbbing and my shoulders hurt. But afterward, I felt calmer, more able to face this new world.

Then came the tweet heard around the country. The National Park Service account tweeted pictures that compared Obama’s and Trump’s inauguration crowds on the National Mall. The Trump administration retaliated by banning multiple government departments, including the Environmental Protection Agency, from posting anything on Twitter. It also eliminated all references to global warming from the White House  website and threatened to do the same to EPA and other federal agency websites. The NPS responded by going rogue, opening up an unverified, unaffiliated Twitter account where they directly addressed Trump’s actions and words and rally support. And just as this simple but effective act of resistance gained momentum, things took a turn for the worse; leaked reports revealed public land is being prepared to be sold off for private ownership.

That post-election walk, the one I took in a publicly owned park, suddenly took on a new significance. How much longer would that park exist as a public space? Would other public spaces like the sidewalks or playgrounds be there for my grandkids?

While parks remain popular and are used by people across all political spectrums, most people can’t really articulate why they want and need the parks outside of a generalized answer that “they’re beautiful.” And yet, the support the NPS has built through its unofficial, fact-loving Twitter account has been unprecedented.

Just last year,  a militia group seized the Malheur National Wildlife Refuge headquarters in Burns, Oregon. The militia was led by the notorious Bundy family, the same family that led a standoff against the government in 2014 in support of land privatization. By occupying the wildlife refuge, the group hoped to advance their belief that the federal land management agencies are constitutionally required to cede the majority of the public land they manage to individual states. Despite public opposition to the takeover,  few seemed to grasp the consequences of the precedent that would have been set had the takeover succeeded.

That general love for beautiful land coupled with the inability to articulate why we love it and defend it for public good is the problem. This is due in large part to the popular narrative that parks are not something we use everyday, they’re something cool that we travel to for vacations—they’re where you go to get a little rest and relaxation or to recreate a John Muir getting-closer-to-God experience. They’re not something we need, and they’re definitely not linked in any way to our schools, hospitals, water, or any other public asset in the public mind.

But we must complicate this discourse and talk about what an integral part privatization is to the Republican agenda. With cabinet confirmations like oil-friendly Rex Tillerson and pro-privatization Rick Perry and Betsy DeVos, the move to privatize NPS land promises to serve as a way to justify the privatization of other public assets like schools, libraries, water, utilities, and even pensions and healthcare. And those of us in Michigan can attest to how devastating the consequences of privatization of our public assets really are.

Michigan is losing its public assets. After Republicans took control of the House and the Senate and Gov. Snyder was elected, they created the emergency management system, which allows state-imposed “emergency managers” (EM) to privatize public assets to pay off city debts. This program has wreaked havoc on EM-controlled cities, but none have been hit as hard as Flint or Detroit. Flint, of course, saw it’s access to clean, safe water destroyed by its emergency manager, leaving untold numbers of people ill or even dead. Detroit’s emergency manager regionalized Detroit’s water system, meaning that while Detroit still technically owns the system, it has no control over what happens to it. Thousands of people in the city now live with no clean running water because they simply can’t afford it. Regionalization will only further increase the cost of water.

Detroit’s emergency manager also signed over control of the city-owned public park Belle Isle to the state. Detroiters argued that giving control of Belle Isle to the state not only meant losing more of the city’s publicly controlled assets and resources, but this act also threatened to shove the majority Black community of Detroit out of a much-beloved and easily accessible space. And indeed, within days of transfer of control, the state announced a four-day park closure to accommodate an auto tech conference. Only after massive public outcry was the park closure lifted.

Everything we’ve seen so far in Trump’s presidency promises to impose the same level of privatization seen in Michigan across the country. And just as in Michigan, there is no end in sight to their privatization efforts. Michigan stands as a warning to what will happen nationally under Trump’s administration if we don’t begin connecting attacks on the NPS to the drastic and dramatic attacks against our publicly owned assets.

So what should we be doing? What would a more accurate and more just discourse defending the NPS and other public assets look like? For some, this leads to the “this land is your land, this land is my land” conundrum. You know, the Woody Guthrie anthem in which he declared that the United States’s land belongs to the people, not the corporations. A worthy sentiment, except as generations of Indigenous peoples have noted, how is ownership by the people any different than government or corporate ownership for Indigenous peoples, who that land really belongs to?

Decolonization must be an integral part of addressing privatization of our public resources; it must be the place we start. It took a deliberate, ongoing system of colonization along with consistent anti–tribal sovereignty Supreme Court rulings to dismantle tribal communal land ownership and impose private landownership as the law of the land. If we don’t directly address colonization, we will never address the root cause and justification of privatization.

We must also refuse the narrative that public assets are solely something we travel to on special vacations to take beautiful pictures of, not something we experience or need every day. What are our daily lives without public schools, publicly owned water, public parks? What does our daily relationship with public assets and resources look like?

I am reminded of myself as a young mother. A working-class Chicana mami. Exhausted. Dealing with undiagnosed chronic illness. Two children. I just had to leave my apartment because the woman living in the apartment below complained to management about the kids “being loud.” But I was too exhausted to do anything or go anywhere. I drove around in my beat-up, run-down car until the children were screaming and kicking the back of my seat. And then—there’s a park. I stop the car and let the children out, and they are free. They scream and run and laugh and there’s nobody hissing at them to be quiet and they are released from their mother’s anxiety. They are free, and even though I can hardly move, I make it to the bench. And I sit and watch my children be free and for just a moment, for just a second, I feel the air on my skin and hear the birds and the laughter and can taste the spring that’s coming soon—and I am free too.

Public space is where we all agree that we have the right to be free. And that’s what we have to fight for as we move forward.