20 Years after "speak," Laurie Halse Anderson's Back with a "SHOUT" | Bitch Media 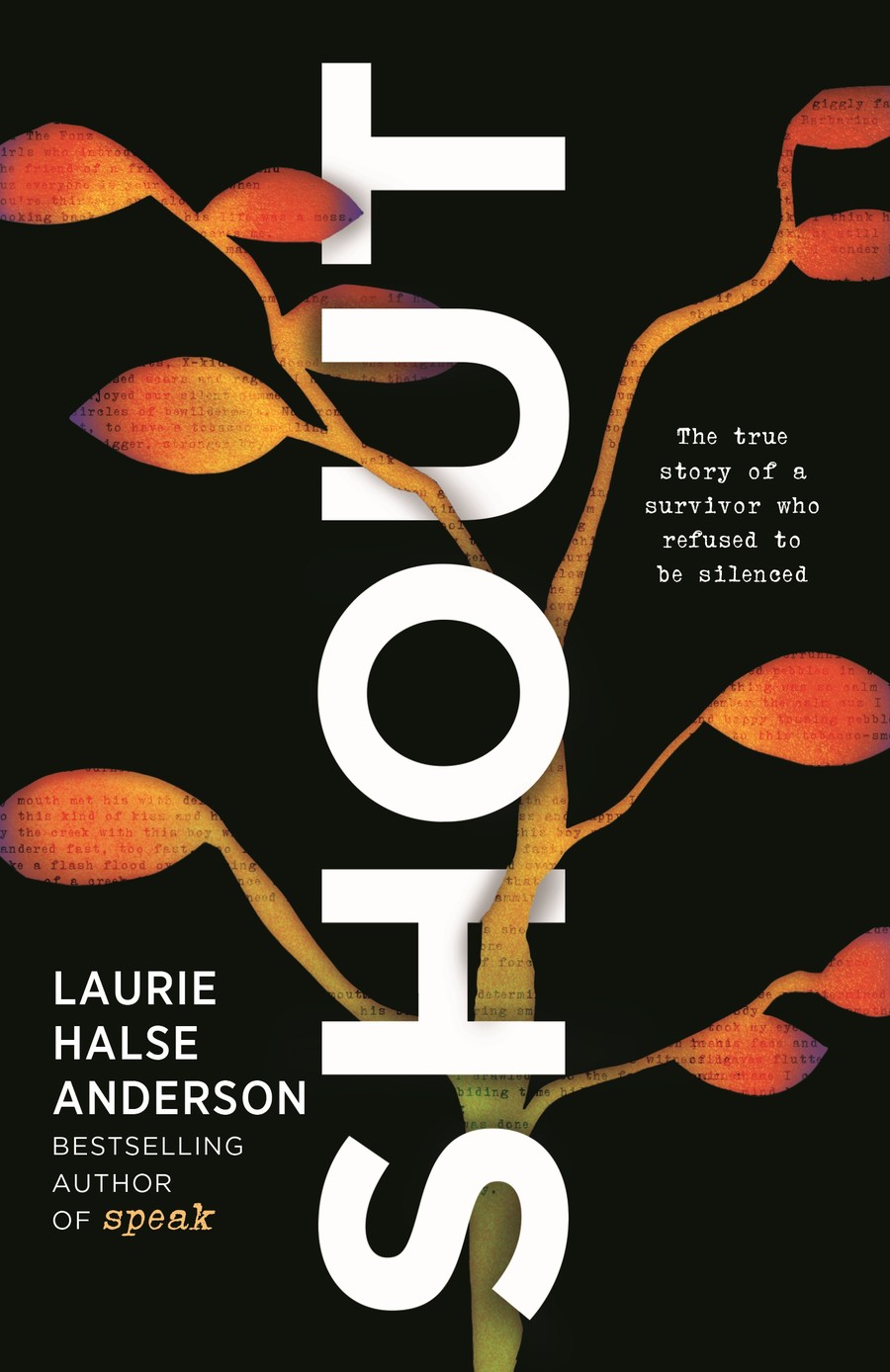 In 1999, author Laurie Halse Anderson told the story of her sexual assault in her radical, bestselling young-adult novel speak, and in doing so gave a generation of teens and young adults a vocabulary for consent and rape. Nearly two decades later, Anderson is back with SHOUT, a memoir in free verse that returns to her own experience but adds those of the innumerable readers who reached out after reading speak. SHOUT weaves stories about formative experiences with meditations on sexual violence, boundaries, and gender dynamics to paint a clear and poignant picture of the insidiousness of rape culture and the lessons it teaches us.

Though such conversations have evolved in the years since speak was published, much remains stagnant; Anderson notes that it’s this still-crucial need for more dialogue and progress that inspired her to return to the topic. Survivors of sexual assault have seen their public platform grow in recent years—most notably through the #MeToo campaign ignited by Tarana Burke— but too many young people are still left out of the conversation. As I read SHOUT, I found myself reflecting on incidents I once brushed off or downplayed even though they made my gut churn: the high-school music teacher who made me cry and then held me in a tight embrace, the customer who asked me into the dressing room when he was in only his underwear, the older man who touched my knee when we were alone in his office. Revisiting my own experiences made clear not only the power of rape culture but also the power of Anderson’s writing; as someone who read speak as a teen, SHOUT was evocative, comforting, and moving.

I recently spoke with Anderson about she changes she’s seen since writing speak, the ways rape culture permeates our everyday lives, the need for nuance and new allies, and how she remains optimistic.

What does it mean to write a book about sexual assault for both the generation that grew up reading speak and the one coming of age during #MeToo?

One variable is 20 years have passed, and a lot has happened in the culture. The second variable is the #MeToo movement—and let’s make sure we shout out Tarana Burke, who put the name to the concept and carried it forward starting in 2006. But I’ve changed and grown in 20 years [too]. It’s some kind of weird combination of all those things that got me to the perspective and the point that I could write about it.

I do think that today’s teens have a much harder time than kids did 20 years ago or 20 years before that, when I was raped. We have more access to information; we have organizations like RAINN, and other sources of information for kids who are trying to learn about healthy sexuality. We’re beginning the conversations about consent. But at the same time, you have the immediate and virulent backlash to the increased visibility of the #MeToo movement. Social media makes it really easy for horrible people to hide and hurt others; the bullying [and] the amount of sexual harassment that I see teenagers having to cope with is horrifying. Because their parents haven’t figured out how to do the brave thing and talk regularly and openly about healthy sexuality, their kids think that they’re not supposed to talk to their parents about things like that. These kids are just lost in the woods at night. And it’s a dangerous place to be.

Every bit of verbiage in SHOUT seems to reference the ways we talk about sexual violence, whether explicit or not. Using that language throughout is a really smart way of showing how insidious rape culture is. Was that intentional?

I think it’s a reflection of a culture that is based on dominance [and] rewards the dominant. This is a land that, in the hands of the people who took it more than 400 years ago, rewards people for being violent and thoughtless instead of a [forging a] culture based on respect, community, and cooperation. Maybe it’s because we’re still such a young culture [that] we still reward people for knocking others out of the way.

I think you see really clearly how early lessons about our bodies start. Could you expand on the significance of these experiences?

When I was working on the first draft of this book, I sat down one day and started writing down some internal research: every single incident I could remember of having my body touched by somebody that I hadn’t invited, or the guy who takes his dick out on the bus, all of those unwanted interactions. That’s actually a really good exercise. I was shocked at how much I had absorbed and stayed silent about.

This is a dark, muddy current that runs through our culture. It’s really important to [also] pay attention to the fact that women are not the only victims of sexual violence. Sexual violence affects men; it affects people who identify outside the binary; it affects LGBTQ people. Transgender people on college campuses have the highest chances of any gender identification group of being sexually assaulted. We have to make sure that we aren’t always coloring this as a cisgender, male/female issue.

Men are [also] harmed by all this toxic masculinity. I’ve talked to so many boys who are so confused because in childhood, for a little while, they’re allowed to have full access to their feelings, and then this culture tells them, “Buckle down and man up.” And the only emotion they’re allowed to show is rage. If they show it on a sports field, that’s even better.

It’s really powerful how prominently themes of silence and fear are woven throughout the book and how they evolve. Could you talk a little bit about the role of silence in the book?

Our culture [needs] to admit nuance and stop insisting that everything is an either/or proposition. The last thing we need to do is to go from the old way—which was that victims of sexual violence should be silent—[to] now [wanting] everybody to speak up then judging and shaming [those] who aren’t comfortable speaking up. There are [many] areas in our cultural conversations where we could all take a deep breath and recognize that everyone’s blocking their own path; we have to respect and honor each other enough to leave space for people to figure out their stuff. At the same time, we can provide resources. We can work within our educational systems to develop great curricula and give parents support so [they] feel comfortable having conversations. That can gradually lead to more people feeling safe enough to speak up.

Silence is a magnificent survival mechanism. It can also kill you. But it’s a great way to stay alive sometimes. The last thing I would ever want is for somebody to feel judged or targeted because that silence was still something that they needed.

A lesson early in the book that was really interesting was in your poem “lovebrarians,” about the idea that the people who support you are not the authority figures—they’re people who help you find your own voice. On the other side, in later chapters there’s frustration about “call-outs” that a lot of us feel with people who we think should be allies but aren’t.

One of the real struggles that is still a daily thing for me has been to learn how to trust the world again. In order to make yourself vulnerable, you have to feel safe, right? I like to compare this to Star Trek because I’m a big Star Trek geek: When the Enterprise has its shields up, nobody can get on board. They’re protected. But you can’t transport from a different ship onto the Enterprise when the shields are up. You have to put your shields down to fight back. That’s what humans are like. When I see people who I would’ve thought [would] be allies but they’re scorning or sneering or refuse to believe survivors, I see [people] that I suspect [are] in a lot of pain. And it’s not my place to speculate about where that pain comes from, but mature cultures have to recognize that things take time and that nuance is involved.

Art can open up conversation and really be a force for change. I know there are several generations of women who are still holding their stories inside.

I think so many of us learned the hard way that the people who are designated as our protectors rarely are: our police force, our school administrators, the church. Do you think there’s a connection between that rude awakening and then, later on in life, how unreasonably happy we are when people fulfill basic obligations?

That’s the legacy of the patriarchy, and it screws everybody over. [With] hetero, cisgender white guys, it’s as if the sun shines out their ass just by showing up, because that’s what our culture tells them. I’ve had some great conversations with guys my age who had that moment, and it’s beginning to dawn on them [that] if they’re entrenched in a culture that keeps on feeding that beast, [other men won’t] be able to figure it out on their own. If you have all the power and you’re in a culture that values power and dominance, you’re not going to give that up willingly. Nobody hands over power because somebody else asked them for it nicely. That’s not what revolutions are made of.

Do you feel optimistic about the young people you speak with?

I am ridiculously hopeful, honestly. That’s why I adore spending time with my readers— because we are making progress. When I was born, in 1961, I think interracial marriage was illegal in 25 or 26 states. I remember going to segregated beaches when I visited my cousins in Florida. I’m not that old, you know? And I can remember thinking [that I wasn’t] going to live long enough to see gay marriage. And then bam, it happened.

Cultural changes are always led by young people. They have the energy, they have the vision, and they have the open heart. And it’s because kids are amazing! All they’re asking us to do is to tell them the truth and make safe spaces where they can listen and speak. I think we owe them that at the very least.

I [also] have a secret desire that people will give this book to the older women in their lives for Mother’s Day. Because we know how art can open up conversation and really be a force for change. And I know there are several generations of women who are still holding their stories inside.