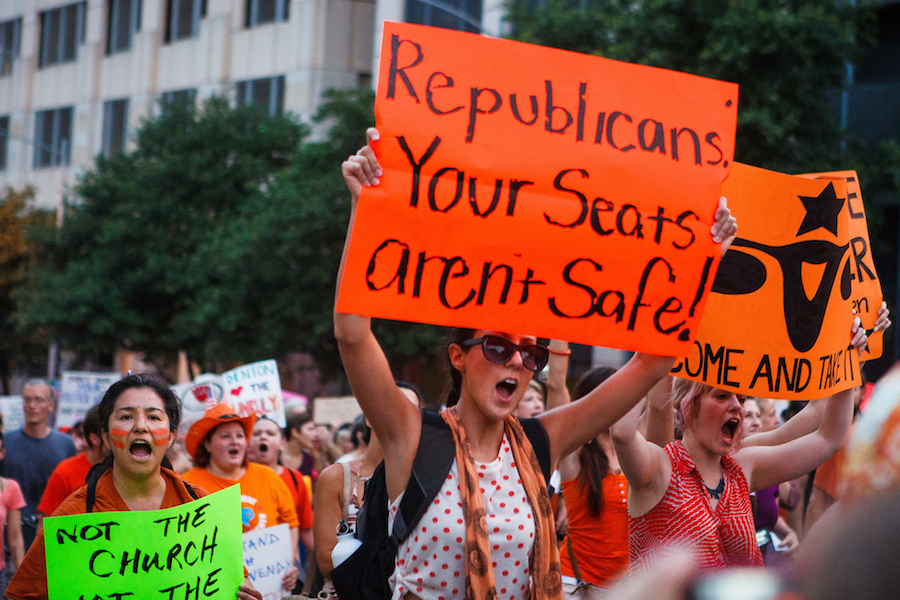 A crowd protests Texas law HB2 in 2013. The Supreme Court will hear arguments on the law this spring. Photo by Beth (Creative Commons).

Forty-five organizations, including healthcare professionals, reproductive rights advocates, and the Obama administration, filed “friend of the court” briefs at the Supreme Court today, asking the Justices to block a controversial Texas law that would force 32 of the state’s 42 abortion clinics to close.

The law, HB2, was the subject of heated protest—including a 10-hour filibuster by State Senator Wendy Davis—before the Republican-controlled Texas legislature passed it in 2013. Reproductive health advocates have been fighting the law since then. A federal district court ruled in 2014 that the law was unconstitutional, saying that clinic closures caused by the law “would operate for a significant number of women in Texas just as drastically as a complete ban on abortion.” But the Fifth Circuit Court of Appeals reversed the decision last June. After that decision, all but eight abortion clinics in Texas were immediately forced to close their doors. That prompted the Supreme Court to issue an emergency stay, allowing the clinics to remain open. Now, the bill will finally be heard by the Supreme Court this coming March. The Supreme Court’s decision on the Texas law could affect similar abortion restriction measures that many state legislatures have passed in recent years as part of a coordinated right-wing campaign to roll back abortion rights state by state instead of at a federal level. 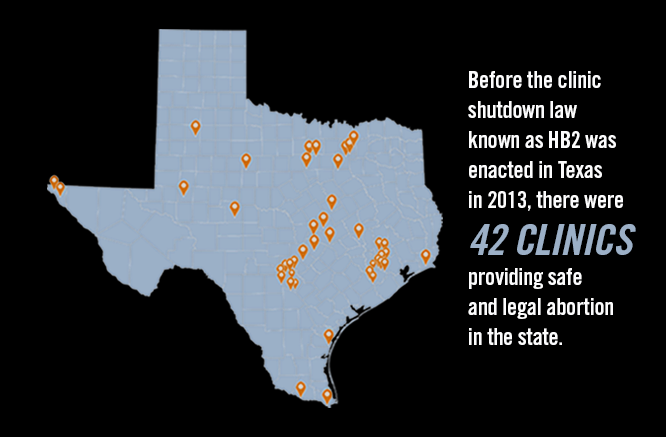 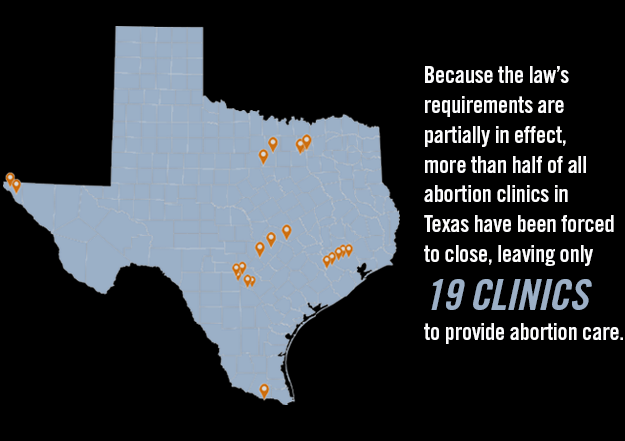 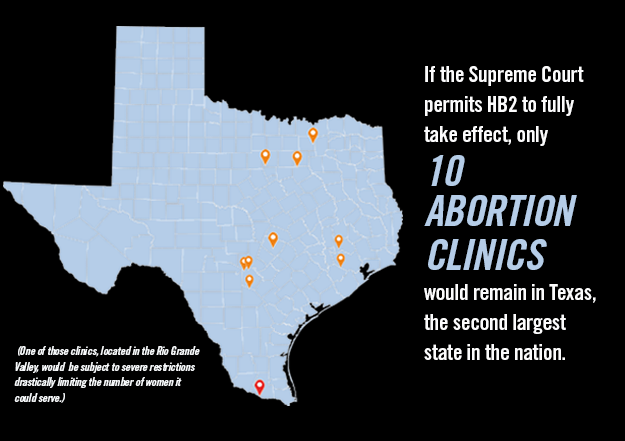 Charts from the Center for Reproductive Rights show the impact of HB2.

Like many other states’ recent abortion restrictions, HB2 chips away at abortion access  in some significant ways. It includes a 20-week abortion ban, requires oversight of women taking abortion-inducing drugs such as RU-486, and requires doctors who performs abortions have admitting privileges at a nearby hospital. During the Texas legislature’s debate over the bill, one of the most powerful pieces of testimony came from a doctor who countered the idea that these measures were necessary to protect the “health and safety” of people obtaining abortions—as right-wing legislators insisted. “There's no reason to go back to the bad old days,” said Dr. Bradley Price. “This [bill] is not coming from doctors, this is coming from politicians.”

Healthcare professionals’ opposition to the bill is clearly seen in the amicus briefs filed today. Among the 45 groups asking the Supreme Court to block the law are the American Medical Association and the American College of Obstetricians and Gynecologists. The Texas law has not protected anyone’s health and safety, their joint brief states, but instead made the situation worse: “There is incontrovertible evidence that imposing these unjustified burdens on abortion providers is impeding women’s access to quality, evidence-based medicine: H.B. 2 has delayed, and in some cases blocked, women’s access to legal abortion. Both outcomes jeopardize women’s health.”

Other organizations point out how abortion restrictions that may seem minor have had a huge impact on real peoples’ lives. In their brief of support, the National Latina Institute for Reproductive Health calls out how closing down clinics forces people to travel huge distances to obtain the legal medical procedure—and how the costs of travel, time off work, and childcare add up.  “Texas Latinas already face significant geographic, transportation, infrastructure, and cost challenges in accessing health services,” their brief states. “Many are forced to forego medical care when they are ill because they cannot take time off from work or school, or secure childcare.”

Wendy Davis filed a joint amicus brief with three other women who have experience in politics, Ohio Representative Teresa Fedor, Nevada Congressional candidate Lucy Flores, and former Seattle City Council member Judy Nicastro. In the statement, all four women share their personal stories of deciding to obtain abortions. “One in every three women has an abortion during her lifetime,” they write. “Yet very few women choose to openly discuss their experiences, a reflection of the cultural and social stigma attached to that choice. The resulting silence allows false stereotypes about why and when women seek abortions to persist in state legislatures and elsewhere.”

by VBF
YA fiction is more and more reflective of the world in which young people actually live, a new normal of characters and storylines encompassing all the complexities of sex, sexuality, and reproductive rights and justice.