This TikTokker Has Your Next Queer Rom Com Reading Rec 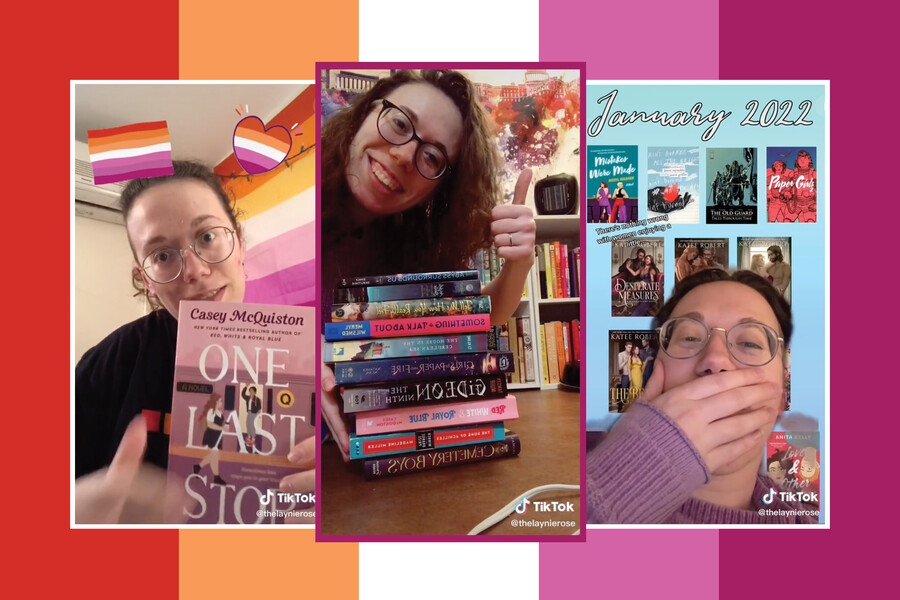 Laynie Rose Rizer—a.k.a. @thelaynierose on TikTok—has queered her Zoom background. A lesbian pride flag hangs on the wall, shrouding the bookcase in orange and pink. A copy of Shelley Parker-Chan’s She Who Became the Sun faces out, bookstore-style. It’s on-brand for Rizer, who started selling books at East City Bookshop in Washington, D.C., when the pandemic dashed their dreams of having a career as a theater stage manager.
In September 2020, Rizer first went viral with TikToks about the gay couple in the Netflix film The Old Guard, but they may be best known for their two criteria for book recommendations: “It’s gay and it slaps.” The 50-second video, with 305.4K views, rocketed Laynie Rose to niche celebrity on BookTok, the unofficial name of a growing TikTok community of booksellers, authors, and bibliophiles. With over 60,000 followers, she reigns as one of the definitive voices—if not the definitive voice—on queer BookTok, all while working full-time at East City Bookshop.
How did you go from bookseller to BookTokker?
I didn’t start making BookToks until I started working at the bookstore. I was reading my coworkers’ blurbs and reviews of books, and I was like, “Y’all sound so fancy. I don’t know that I can do that.” And then I made, “It’s gay and it slaps,” and I was like, “Oh, there’s this whole other world here that I didn’t know about.”
So, part of the reason you got into BookTok is that you were looking for the queer, lowbrow alternative to your coworkers’ book blurbs?
I was primarily surrounded by people who were reading [books like] All the Light We Cannot See and Circe, and I just want to read ones where they’re gay and they kiss. I actually did not tell any of my coworkers I was on TikTok until three or four months of working there. And it was only because my followers [were] starting to come into the store, and [they would] be like, “You’re Laynie Rose!”
Recently, you said you don’t get starstruck by authors anymore. But sometimes you do.
But sometimes I do. Like Casey McQuiston. Through TikTok, I have made several great working relationships with authors. Casey McQuiston and Sasha Peyton Smith, author of The Witch Haven, have both come in and signed books for us multiple times. I’ve been able to connect with Margot Wood and Sophie Gonzales and Becky Albertalli. It’s like, “Oh, we’re buddies! That’s cool! I’m gonna sell the crap out of your book.”
You’re big on BookTok, and you’re a bookseller. What is work-life balance for you?
That’s something my bookseller friends and I talk about a lot. We’re not paid to read for bookselling—we’re encouraged to. This is something a lot of people don’t know. The more advanced reader copies we read and review, the more publishers will send us those books. Then we have more opportunities to read books by queer authors of color. It is a balance. I read for work, but I’m also not getting paid to read for work.
And for TikTok I do book reviews, and I like to do rec lists. But I also go apeshit over Supernatural fan fiction. I’m a huge D.C. person. I go to the museums all the time. I try to anchor myself in things outside of bookselling because having it be both work and pleasure can be all-consuming. It makes me happy that you recognize that it can get blurred.

What is the BookTok influence on actual buying?
Short answer: It influences a lot. Probably once a day, I hear someone in the store say, “Oh, yeah! I’ve seen that on BookTok.” And a lot of our bestsellers are books that are popular on BookTok. Like The Song of Achilles; Red, White & Royal Blue; and The Love Hypothesis. Oh my god, we sell so much of The Love Hypothesis. And These Violent Delights and The House in the Cerulean Sea. All of these books that are huge on BookTok, I really do see reflected in our store buying.
Something I’m really proud of is the way I’ve been able to use BookTok and bookselling for preorder campaigns. Those have been incredibly successful at our store. I had six months to work with the If This Gets Out preorder campaign. We sold over 300 copies.
I am seeing a lot more queer romance and queer fiction in general. Is it a coincidence that’s happening alongside BookTok?
I don’t have a good picture of what it was like before because I wasn’t on BookTok at all before “It’s gay and it slaps.” I think it’s happening because people are finding community. Then they’re able to find 1,700 more options than when they thought all we had was Carry On by Rainbow Rowell and The Song of Achilles.
As someone who has a hardcover copy of Carry On by Rainbow Rowell on my shelf right now, I completely understand. And I don’t expect you to be the expert since you aren’t the one doing the research.
I can say that I’ve seen it affect me. The TV show The Magicians did such a horrific queer bait and killing off of their queer character at the end of season four. I was like, I can’t trust TV shows or movies to accurately tell a queer story. I need to seek out stories by queer people. The first five queer books I read were Simon vs. the Homo Sapiens Agenda; The Song of Achilles; Aristotle and Dante Discover the Secrets of the Universe; Carry On; and Red, White & Royal Blue. Because that was all I knew existed. Those are the only five books people knew about for so long.
What queer books are you most excited about this year?
For adult romance: Love & Other Disasters by Anita Kelly, Kosoko Jackson’s I’m So (Not) Over You, Count Your Lucky Stars by Alexandria Bellefleur, and Ashley Herring Blake[’s] adult romance debut, Delilah Green Doesn’t Care. Also, one of my author friends, Timothy Janovsky, is coming out with his debut book, Never Been Kissed. And, of course, we’re getting the sequel to Boyfriend Material by Alexis Hall.

“I just want to read [books] where they’re gay and they kiss.”

What is something you love that would surprise people?
I really like nonfiction and documentaries. I go bonkers over ocean documentaries. I watched one the other day that was imagining—this is so nerdy—the whole area of the ocean floor where the Titanic sank. It turns out there was only an 11-foot gash in the Titanic, and it sank over [a span of] two and a half hours. There’s this myth that the Titanic broke before it sank, but looking at how it fell, it wasn’t until after a mile into the ocean that it broke apart.
One of my goals for the new year is to read more nonfiction because I really enjoy learning. There’s a book called Cultish, and it’s about the language of fanaticism—everything from Jonestown to diet culture and spin[ning].
What do you want to be when you grow up?
I’ve learned in the pandemic that I can’t think too far ahead anymore. I love where I work. I love living on Capitol Hill. So, what do I want to be when I grow up? I want to be happy. I want to go to the farmers market on weekends and have my little cat and balcony. Would I like to write a book one day? Sure. Would I like to publish some poetry one day? Sure. But I don’t have any concrete plans for any of that. You don’t have to sacrifice your life for your career. You shouldn’t.
Who else should your followers be following?
If you’re looking for book content, follow the publishers. I also really love Maya on BookTok and my other friend @qweerjessreads. Those are two of my friends that I really adore. Follow Margot Wood. She’s hilarious. Also @justgreggy and @sapphoslibrary. And just find your niche. I guarantee you there’s someone out there who is into the same weird stuff you’re into, and you gotta latch onto them.
This interview has been edited and condensed for clarity and length.

Read this Next: In Vogue 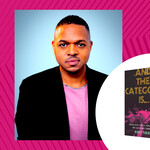 by Dr. Jon Paul
"And the Category Is..." offers a careful and thoughtful examination of ballroom culture.