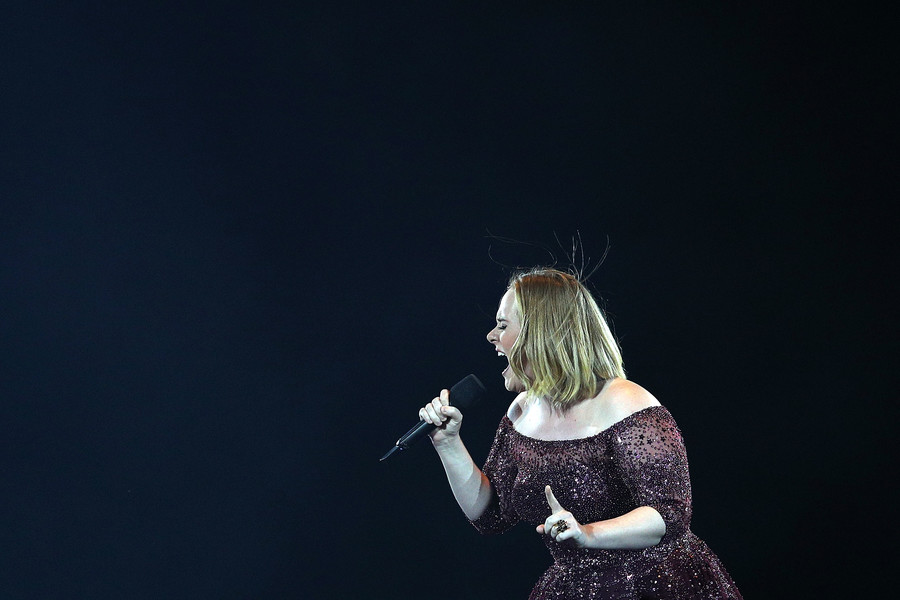 Adele is accustomed to breaking the internet: In October 2015, a 30-second snippet of her soon-to-be legendary song “Hello” appeared on a commercial during the United Kingdom’s version of X Factor. Her triumphant return to music, four years after the release of 21, sent the internet into a frenzy, guaranteeing that “Hello,” and the accompanying 25 album, would shoot to the top of charts and garner her even more awards. Adele’s January 2016 appearance on James Corden’s wildly popular “Carpool Karaoke” segment achieved a similar aim: It brought her—and her animated, spot-on rapping of Nicki Minaj’s verse on the 2010 song “Monster” —into millions of living rooms and computer screens, generating positive press based solely on her musical abilities and her willingness to poke fun at herself. Now, Adele’s name is on the tip of the internet’s tongue once again, but this time, her seemingly slimmer body is the center of the conversation.

On May 6, Adele posted an innocuous photo on her Instagram grid, nearly five months after posting her last photo, to thank essential workers for “keeping us safe while risking their lives.” Comments flooded in, though none of them seemingly acknowledged the photo’s caption: “YOU LOOK AMAZING,” beauty YouTuber James Charles commented, while Chrissy Teigen followed with, “I mean are you kidding me.” Lil Nas X, an Instagram account called Healthy Fitness Meals, Jenni Farley a.k.a JWOWW, and a who’s who mix of other ordinary people and celebrities descended on this picture to praise Adele—not because she acknowledged the sacrifices essential workers are making but because she debuted a slimmer body in a knee-length dress and black heels.

In some ways, the internet has been a life line for fat people, helping us find and create community among ourselves without the existential pressure to become slimmer, creating avenues for us to pursue careers as influencers and designers tasked with making the fashion industry more inclusive, and even giving us possibility models to mirror as we unlearn diet culture. But fat liberation—a movement started in the 1960s to secure legal protections for fat people and evolve beauty standards—has now morphed into body positivity, a countermovement for every person who wants to pinch the extra fat on their stomach for Instagram likes. And now there’s less focus on dismantling fatphobia and more focus on bodies themselves. Yes, body-positive influencers consider the impact of eating disorders, for example, but they’re more focused on the individual act of “overcoming” a disease and less focused on the social factors that prevent people battling eating disorders from accessing professional help.

And then, of course, there’s the other consequence of a subculture becoming mainstream: Fat people are suddenly “inspirational” and “courageous” for simply existing in public; twerking in an ass-less dress at a professional basketball game is elevated into an act of bravery, and any person with fat rolls who dares steps on the beach in a bathing suit is automatically dubbed a member of the body-positive community. Fat people, especially those like Adele who are visible, are then held to the community’s standards, becoming fodder for conversation—a place to rest hopes and dreams and fears—without them offering consent or even expressing interest in having these expectations placed on them. And in this way, social media becomes a spectator sport, a place for people to survey fat people’s bodies, noting as they shrink and expand and speculating about the cause for weight loss or weight gain. The movement, then, limits its scope to individual people’s always evolving and fluctuating bodies rather than the very systems that turn weight loss into headline-making news.

Here, as always, perceived desirability, which often becomes a double-edged sword for fat people, is less about the person at the center—in this case, Adele—and more about the baggage we bring into these conversations and then project on those participating in it. As Sherronda J. Brown noted in an August 2017 article for Wear Your Voice, “Amid conversations about desirability politics and fatness, it is important to keep fat humanity at the forefront, because the dehumanization of fatness and fat people is at the forefront of fatphobia.” Always. In these conversations, in which people across the internet dissect Adele’s body, what could’ve prompted her weight loss, and try to reassert that Adele has “been that bitch” for a long time, there’s still a hyperfocus on the size of her body instead of how that has been conflated with her worth as an artist and as a woman.

Adele’s body is not a battleground for us to plant our “all bodies are good bodies” flags on.

Dehumanizing fat people is crucial to perpetuating fatphobia because it allows those who benefit from thinness to divorce their beliefs about “obesity” from the literal humanity of those oppressed within the system. You can have internalized beliefs about the relationship between work ethic and fatness—thinness implies discipline, while fatness signifies laziness and slovenliness—or goodness and fatness—thinness equals an intense care for your own body—and still believe you treat fat people well. That idea, that it’s possible to separate fatphobia from treatment of individual people, allows the oppression to continue with impunity, without shame, and with complete disregard for how our thoughts about fatness informs our behaviors, which in turn, informs policy (or, in the case of workplace discrimination, lack thereof). It also allows strangers to project their own feelings about Adele’s body onto her without ever once considering how that might impact her perception of herself.

Never mind that Adele has recently endured a divorce, which has been proven to have an emotional and mental impact on those who’ve experienced it. Never mind that she has rarely spoken publicly about her relationship with her body and has never positioned herself as a body-positive icon. Never mind that she’s such a private person that we can only peek into her life through a carefully curated Instagram grid. In a culture that often equates thinness with moral goodness, weight loss is worthy of celebration, no matter how it’s obtained or what it signals about what’s happening with our bodies. “Anyone who’s ever shed a significant amount of weight knows the look: the one you get when someone who hasn’t seen you for a while takes your new body in, a thrilled yet somehow appraising smile on their face, rushing to cover you in compliments before asking, “So…how’d you do it?” Emma Specter noted in a Vogue article about the internet fawning over Adele’s body.

This look is all-too-familiar to me. Since being diagnosed with cardiomyopathy in May 2019, a number of people, ranging from close friends to family members, have complimented me for making the best of a bad situation e.g. dropping a significant amount of weight. It wasn’t desired or even earned weight loss, foisted on me by a cocktail of medications as well as sodium and liquid restrictions, but no matter how weight loss is achieved, it is deemed a step toward “healthiness” and “wholeness.” Note all of the people saying Adele looks as if she’s glowing in that Instagram photo, though she’s so far away from the camera that it’s impossible to tell if her smile is reflected in her eyes.

As Rachel Leishman highlighted in an article for the Mary Sue, “The issue is not whether we think Adele is beautiful at any weight (she is) but instead that the internet feels the need to debate her weight-loss, and to praise and/or malign her for it.” Adele’s body is not a battleground for us to plant our “all bodies are good bodies” flags on. We can and should continue conversing about fatphobia and desirability because shifting our interpersonal treatment of fat people is a crucial cornerstone in the ongoing fat liberation movement. But those conversations shouldn’t happen at Adele’s expense or in the comments of a photo she posted. Reinstating humanity is a part of the goal here, and Adele should be able to retain hers—no matter what size she chooses to be.

Read this Next: Truth Hurts 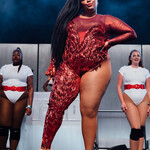 by Keah Brown
In every industry Black women have to work four times as hard for less than half the credit.