“Legend of Korra” Shows How to Navigate PTSD While Fighting Injustice 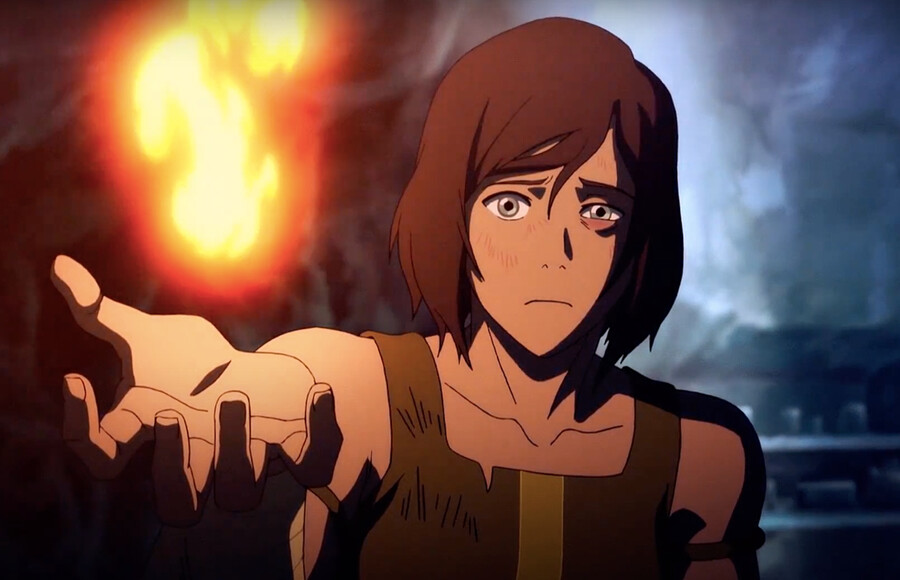 Superheroes show us how to fight villains, but the best superheroes also show us how to continue the fight while processing the trauma that comes with our journey toward justice. Released by Nickelodeon in 2012, Legend of Korra (LOK) isn’t any more perfect than Korra herself, but it did break ground and, as a result, Korra has been called a “hero” for her representation of mental illness. It’s rather similar to Iron Man 3 (2013) or Jessica Jones (2015), both of which gave us superhero stories that show how post-traumatic stress disorder (PTSD) symptoms manifest in a main character. In LOK, Korra (Janet Varney) uses her mastery of the four elements to defeat a variety of power-hungry leaders who seek to control the world and the people in it. While she has made mistakes, she always uses her powers for what she believes are good and just reason. Notably, Korra is a portrayal of an Indigenous-coded woman who has to deal with her complex PTSD in order to continue her duty as Avatar, master of the elements.

The title and skill set gives her both superhero status and a ton of responsibility: Like all Avatars, Korra is expected to bring balance to the universe, protect some of the most vulnerable, and bridge the gap between the spirit world and the physical world. It’s a lot of pressure, one we watch Korra bend under. In the process, we find one of the most accurate depictions of CPTSD I’ve ever seen on TV. Korra, like her predecessor Aang (Zach Tyler Eisen), experiences numerous traumatic events in her role as Avatar. In a similar vein to LOK, Avatar: The Last Airbender (ATLA), which debuted in 2005, explores Aang’s feelings of guilt and trauma following his realization that he is truly the last airbender on the planet, as the Air Nation was murdered in part because he wasn’t there to protect them. In the first season of ATLA episode “The Southern Air Temple,” Aang returns to the Southern air temple and is hit with the realization that all of his family and friends, as well as his entire airbender community, are dead, and we see his struggle in real time as he nearly loses control.

This realistic and honest portrayal of pain and trauma continues with LOK. We first meet Korra as a rambunctious child who bends a hole through her parents’ wall as she jumps out, proudly exclaiming she’s the next Avatar. Though she was still learning to master airbending, she met many of Tenzin’s (J.K. Simmons) exercises with gusto. She’s confident, bordering on cocky, and she’s sure that she’s up for the job of Avatar. But there’s a shift: In the years that follow, she experiences multiple traumas that only seem to ramp up as the seasons continue. We meet a new Korra who’s unsure of herself and easily rattled. One of the first traumas Korra endures is when she has her bending taken away by a villain in Season 1. Bending in the world of ATLA and LOK is an integral part of each elemental nation’s culture and history, so there’s an immense psychic and cultural loss when someone loses their ability to bend. When Season 1’s villain, Amon (Steve Blum), takes Korra’s ability to bend water, fire, and earth, he also threatens her very role as Avatar. But more important, losing her ability to waterbend is a deeper trauma because it breaks Korra’s connection to her water tribe.

I liken it to the loss of one’s home language. The pain of losing her cultural connection—however briefly—and the threat to her role as Avatar are compounded by her later traumas. Similarly, the second season features a final battle between Korra and her uncle, which results in her severed connection with previous Avatars. Again, we see how much Korra stands to lose and what she has already lost. The trauma that comes in Season 3 is the most brutal yet: Zaheer (Henry Rollins) and his gang capture Korra and attempt to murder her, and—somehow even more distressingly—try to end the Avatar line as the universe of LOK knows it. They chain her up and poison her with mercury to force her into the Avatar state; by killing her while she’s in the Avatar state, they could end the Avatar line forever and stop what they see as an unfair, marginalizing hierarchy.

We watch as Korra struggles, and she begins to sweat profusely and scream in agony as the poison courses through her veins. Her eyes flicker like a light going on and off as she struggles to not enter the Avatar state, despite it being what her body naturally seeks when she’s in dangerous moments like these. Korra begins to hallucinate, seeing Zaheer’s face crumble and Amon’s face appear, showing how those who want to harm her have blended into a larger, even more terrifying adversary. She wrestles with the knowledge that there isn’t just evil out there; instead, evil has become a constant. Her choice is a cruel one: Save herself, or save the Avatar line. She makes the awful decision (if we can even call it that) to die from the poison. Despite the violence already thrust upon her, there’s more to come; Zaheer traps her head in an air bubble, suffocating her. While Korra does win the battle in the end, she is changed forever, as the experience takes a physical toll on her body, her mind, and her sense of self. 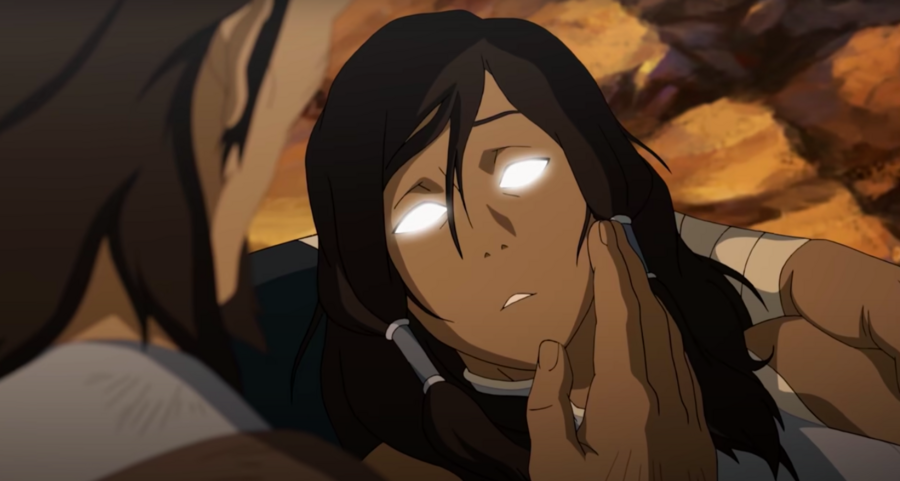 Instead of the plot moving forward and onto the next Big Bad, the show takes time to delve into the emotional and mental effects the previous seasons’ battles have had on Korra. A significant part of the plot in LOK’s fourth season (“Balance”) is how Korra deals with her PTSD, the portrayal of which feels honest and thoughtful, even when it’s painful to watch. Historically, onscreen depictions of PTSD are often flattened and misguided. In a 2016 article for Vulture, Angelica Jade Bastién outlined some of those tired TV tropes, including the asshole genius, a distrust of help, and eventual criminality. Among the research around PTSD, the work of Bessel van der Kolk, MD, has become a go-to for understanding it. In his much-touted 2015 book, The Body Keeps the Score: Brain, Mind, and Body in the Healing of Trauma, he looked at the mind-body connection of people who have endured traumatic events that plague them later in life. “We have learned that trauma is not just an event that took place sometime in the past; it is also the imprint left by that experience on mind, brain, and body,” he wrote.

During “Balance,” we see how the various traumas from earlier seasons have done just that, imprinting themselves on Korra’s mind, brain, and body. Flashbacks, nightmares, and severe anxiety are all common symptoms of PTSD, and this holds true for Korra throughout the season, as we see her plagued by flashbacks of her near-deadly encounter with Zaheer. In “Korra Alone,” the second episode of the season, we see how far Korra has spiraled and how distant she has become. She’s unable to sleep in the weeks following her fight with Zaheer, waking from nightmares of the attack in which she finds herself back in the cave, chained up and poisoned, or facing Amon as he’s about to take her bending away. She sees a shadow version of herself, withdraws from her friends and family, and feels haunted by her losses. She’s a different person than the boisterous go-getter we met early on. We’re able to see her pain for what it is: trauma.

In a move all too relevant in our current context, Legend of Korra shows TV viewers that it’s possible to manage trauma—even while continuing the fight for justice.

We also see that healing sometimes requires help. At the request of her mother, Korra finally goes to see Katara (Eva Marie Saint) of the original ATLA, who can help Korra heal just as she once helped Aang. Still unable to walk, Korra is frustrated that her body isn’t doing what she wants. “The mind can be a powerful ally or your greatest enemy,” Katara tells her. Korra’s mind is disconnected from her body; her physical recovery is slowed down by the internal struggle that rages in her mind as she tries, and fails, to process her trauma. For example, one nasty symptom of CPTSD is hypervigilance, or the feeling that you’re always under attack. In one session with Katara, Korra is unable to complete her physical therapy when flashbacks of her poisoning cause her to topple over. Katara reassures her by saying, “You’re okay. Your body thinks it’s still in danger, but you’re safe here.” Korra can’t focus on healing because her body still feels like it’s being attacked.

As van der Kolk wrote, “If an organism is stuck in survival mode, its energies are focused on fighting off unseen enemies, which leaves no room for nurture, care, and love.” Korra has barely kept in contact with her friends and hasn’t been able to resume her role as Avatar, protector of the world. She’s stuck in survival mode, constantly reliving her fight with Zaheer. Heart pounding, hair plastered to her face with sweat, terror takes hold: We watch as she wakes from a nightmare or a flashback interrupts her sparring. She’s stalked by a shadow Korra carrying the chains from when she was poisoned. The figure torments Korra and uses the chain to attack her; it’s a good visual metaphor for how trauma follows us around. Eventually Korra confronts Zaheer and faces what happened to her. Although her condition isn’t “cured,” she’s able to manage her symptoms and continue the fight, carrying out her role as Avatar. Korra is not the same, but she isn’t any lesser because of what she’s faced. Her loved ones give her space to deal with her complicated trauma, recognizing and honoring who she has become. Her trauma isn’t the butt of a joke or a stereotypical portrayal of arrogant genius. She’s still Korra, and she’ll always be healing. In a move all too relevant in our current context, Legend of Korra shows TV viewers that it’s possible to manage trauma—even while continuing the fight for justice. 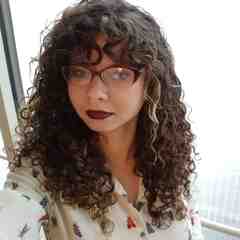 Jennifer is a writer, poet and scholar.