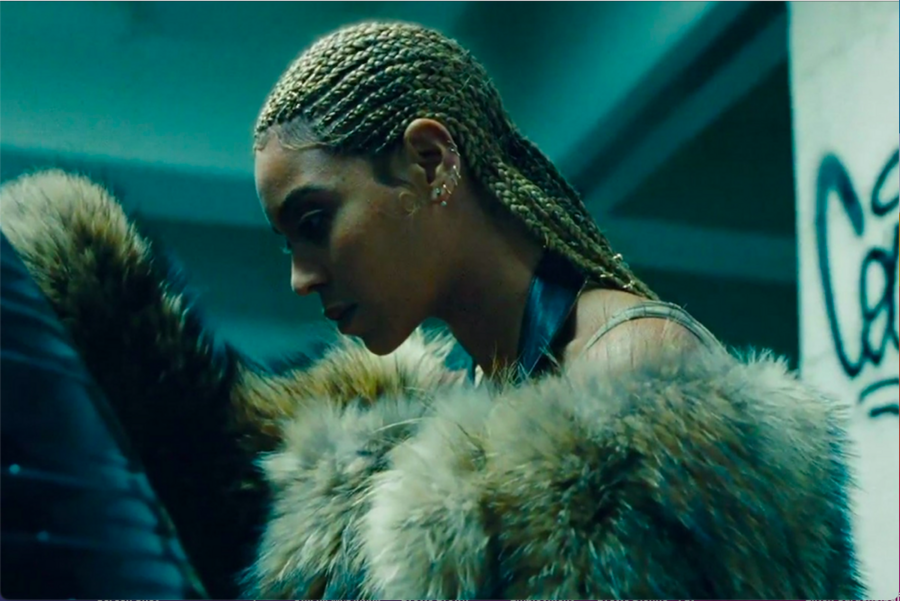 Beyoncé in the visual album for Lemonade (Photo credit: Parkwood/HBO)

Five years ago, Beyoncé released her sixth studio album, Lemonade, a follow-up to the self-titled visual album she dropped without warning in December 2013. The surprise release of the Grammy-winning album—and the hourlong HBO special that accompanied it—confirmed Beyoncé’s reign in visual as well as musical narrative; this time, however, it came with a defined narrative arc. Lemonade turned out to be a lush, atmospheric work of art and a testimony to the power of cathartic storytelling. Among the cultural and political references it included were religious iconography, unsung Black female film directors, the South, Creole culture, and the Black diaspora; together, they challenged and disrupted the stereotypical narratives of femme Black womanhood that rely on tragic depictions of martyrdom or imprisonment as an eternal mule.

Like a Biblical parable, the heroine of Lemonade embarks on a path that ultimately teaches forgiveness, redemption, and love. And in contrast to Beyoncé’s 2013 album, Lemonade fully embraces music as a form of protest, specifically against systemic oppression enforced by a white supremacist and patriarchal society. In all its glory, Lemonade takes a step beyond the concept of “finding the beauty in imperfection,” embracing fallibility as a necessary component of liberation. Tidal, the subscription-based streaming service that debuted Lemonade, called the album “a conceptual project based on every woman’s journey of self-knowledge and healing.” Indeed, the idea that enlightenment comes through healing, rather than scorched-earth revenge, is the project’s emotional core. Though its title references a well-worn aphorism— “When life gives you lemons, make lemonade”—it underscores that the phrase’s meaning is rooted in the idea that bitter and sweet are complimentary: bittersweet.

Pain has a purpose; it cleanses the soul. In order to emerge a phoenix, one must first catch fire and burn to ash. Lemonade’s visual narrative is divided into 11 chapters that cycle through the stages of grief. Each chapter features a voiceover from Beyoncé, who reads poetry by Somali British poet Warsan Shire. Chapter 1 introduces the prominent narrative theme of familial legacies inherited as hauntings in which ghosts from the past find their way into the present. “What are you hiding?” Beyoncé asks in the film. “The past and the future merge to meet us here. What luck. What a fucking curse.” Chapter 8 (“Forgiveness”) finds her beseeching “Baptize me…now that reconciliation is possible…. There is a curse that will be broken.” By Chapter 11 (“Redemption), Beyoncé reaches a place of transformative healing, free from a legacy of broken relationships and generational trauma.

Lemonade’s narrative equates healing with forgiving—but not forgetting—and self-knowledge with knowledge of pain. Take, for example, the third track, “Don’t Hurt Yourself,” in which Beyoncé sings: “I am the dragon breathing fire/ Beautiful mane, I’m the lion/ Beautiful man, I know you’re lying/ I am not broken, I’m not crying, I’m not crying.” The lyrics lean into anger and power rather than debilitating sadness. In the video, she has exchanged the bright-yellow dress worn in “Hold Up” for a fur coat, high-waisted bike shorts, a crop top, and heels. She commands the screen with an unmistakable swagger. In another shot, she’s outfitted in a strapless taffeta gown, her neck adorned with a glittering choker. She’s been captured moving in reverse; she floats backward up off the floor like a ghost, like a vengeful Miss Havisham or a jilted lover caught in the throes of an exorcism. “Don’t Hurt Yourself” also samples Malcom X’s speech, “Who Taught You To Hate Yourself,” with the lines: “The most disrespected person in America is the Black woman…The most unprotected person in America is the black woman. The most neglected person in America is the Black woman.” The inclusion of such lines speaks to the personal anecdotes of betrayal and mistreatment explored throughout the album, as well as the misogynoir Black women face in society. Later, after the demons have been vanquished, Beyoncé sings in “All Night,” the album and film’s final song, “With every tear came redemption and my torturer became my remedy.”

Lemonade explores redemption in the context of romantic relationships, but also in regard to how Black women understand their own self-worth. The twangy country-pop track “Daddy Lessons” considers how father figures (or a lack thereof) can shape a daughter’s knowledge of herself and the world around her. The song’s video is a clear homage to Bey’s Texas pride, her racial and ethnic heritage, and country music’s unspoken and long-ignored Black roots. In the video for “Love Drought,” women in white dresses lounge in trees draped with Spanish moss and later wade into the water, evoking the imagery of Julie Dash’s 1991 film Daughters of the Dust. In this way, Lemonade’s imagery invokes the tradition of oral storytelling—memories and mythologies passed down as heirlooms from generation to generation. “I am the first and I am the last…. The ancestor and the womb are one and the same,” Nana (Cora Lee Day), the family matriarch, says in Dash’s film. Lemonade, inspired by the magical realism embedded in Daughters of the Dust, is very much an individual and collective narrative about Black womanhood. Yet many critics could only see the album as a study of Jay-Z and Beyoncé, the celebrity power couple whose marriage is in question.

In a 2016 New York Times review, Joe Coscarelli focused mainly on rumored problems between the two, invoking the infamous elevator incident at the 2014 Met Gala and framing the album as a grand tell-all in which Beyoncé “addresses years of tabloid speculation about her marriage head-on.” Other critics, along with many social-media users, were hungry to uncover the identity of “Becky with the good hair,” who is referenced in a catchy line at the end of “Sorry.” However, the obsession with revealing Becky obscured the true intent of the lyric, which refers to colorism within the Black community. In a 2018 Harper’s Bazaar interview, “Sorry” songwriter and producer Diana Gordon said of the line, “It was a metaphor, too. ‘With the good hair,’ just meant like you’re dating a light-skinned Black girl, because ‘good hair’ is just what we say in the Black community for women who have not-so-kinky hair.” To limit Lemonade to an album purely about a woman scorned downplays its sweeping artistic scope. Though the album delves deep into the pain of infidelity, it shouldn’t be separated from its depiction of Black womanhood as a far-reaching community forged from shared experience.

The album’s narrative explores heartbreak and pain, but it’s not a portrait of defeat.

“At home surrounded by Black women is essential to our self-discovery,” Stephanie Mayo-Lee wrote in a review of the album for Catapult. “It is [a] reflection of the Ubuntu philosophy that states ‘I am because We are.’ Beyoncé understands that she is because of the women before her. This understanding is reflected in the slow zooming out of the camera showing various Black women on the branches of the live oak and the women standing underneath it.” As Mayo-Lee declares, “Home is salvation.” Though Black women are forced to navigate a society ruled by white supremacy, the sacredness they find with other Black women becomes a form of safety. In the video for “Forward,” Sybrina Fulton (Trayvon Martin’s mother), Gwen Carr (Eric Garner’s mother), and Lezley McSpadden (Michael Brown’s mother) appear, holding portraits of their late sons. And “Formation” references Martin, Hurricane Katrina, and the movement to end police violence in the United States. Multiple shots find Beyoncé perched on top of a New Orleans cop car, combining protest and empowerment and bringing to life defiant lyrics like “I like my negro nose with Jackson Five nostrils.”

At the time, both the video and the song marked a new chapter in Beyoncé’s career, one that amplified and uplifted Blackness without catering to the white gaze or appeasing white fragility. And at the Super Bowl 50 halftime show, Beyoncé used “Formation” to respond to America’s legacy of anti-Blackness and continued police brutality. The Super Bowl is typically not a venue for speaking out against injustice—especially after a wardrobe malfunction at the 2004 Super Bowl halftime show led the NFL and the broader media to crucify Janet Jackson. In the wake of Jackson’s “wardrobe malfunction,” the league consciously played it safe with halftime performers who wouldn’t attract controversy. But though Super Bowl 50 booked Coldplay as the headliner, Beyoncé stole the show with what the media deemed a “radical political statement” that included references to the Black Panthers, Malcolm X, and Black Pride. Dancers clad in black leather and berets raised their fists in the air, evoking the iconic image of Tommie Smith and John Carlos on the podium at the 1968 Olympics. Former New York City mayor Rudy Giuliani criticized Beyoncé’s performance, calling it “ridiculous” on Fox News. He added, “This is football, not Hollywood, and I thought it was really outrageous that she used it as a platform to attack police officers who are the people who protect her and protect us, and keep us alive.”

Now, five years later, Lemonade continues to resonate for many of the same reasons Beyoncé’s Super Bowl 50 performance struck a nerve: The album’s narrative explores heartbreak and pain, but it’s not a portrait of defeat. In the final chapter, “Redemption,” there’s even a sense of rebirth: “Grandmother, the alchemist, you spun gold out of this hard life, conjured beauty from the things left behind.” Lemonade shows that true empowerment can’t begin without the willingness to break down and if need be, start over again. In her 2000 book All About Love: New Visions, bell hooks writes, “Only love can heal the wounds of the past. However, the intensity of our woundedness often leads to a closing of the heart, making it impossible for us to give or receive the love that is given to us.” Hurt people hurt people because they haven’t healed from past wounds. Lemonade’s narrative understands that true love is not possible without healing, and true healing can only begin after a woman makes the pilgrimage back home and finds inner peace.

Read this Next: Hold Up 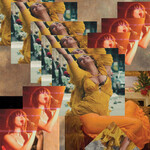 by Erica Campbell
“Hold Up” is a nuanced love song in which the female protagonist isn’t begging or asking for love.