Pride and JoyLGBTQ Muslims and the Power of Online Spaces 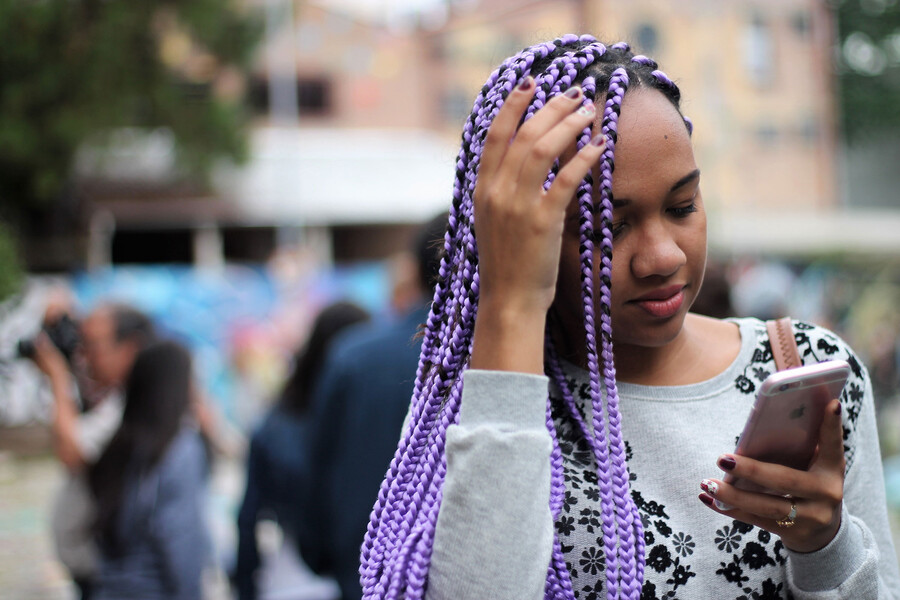 When Hafiza Ameerah Khan began her coming out process it was an isolating experience. Khan, a Bengali American Muslimah, told Bitch, “When I came out of the closet in 2016, I did not know of a single other queer Muslim in the world—and I really felt like I was the only one out there.” In recent years, some have pushed against the “coming out” narrative, noting that it doesn’t capture the complexity of queer life. Some critics feel that the phrase “coming out” doesn’t capture what it means to live within a cis-heteronormative society. Others also argue that “coming out” puts unnecessary pressure on LGBTQ people to expose intimate details of themselves and their lives. But at the end of the day, the decision to come out, to not do so, or to outright reject the phrase is deeply personal. Where someone falls in the discussion doesn’t erase the difficulties of navigating self-realization. And for Khan, it was important to be as clear as possible about who she is. She ended up announcing her coming out by performing spoken word at a Muslim Student Association conference.

After the event, a sister approached Khan and offered to connect her to a Muslim acquaintance in New York City. That connection took place over Facebook Messenger and, later, the acquaintance added Khan to Radical Muslims—a Facebook group with a tongue-in-cheek title that, she said, “became a place where I flourished and felt like I could be myself, even if it was entirely virtual.” Since then, Khan’s LGBTQ Muslim community has expanded both on and offline. That Facebook group, however, will always hold a spot in Khan’s heart. “I have arrived at a point in my life where I know that I have community as well as the fact that I am supported by Allah on my path to promote inclusivity of LGBT Muslims,” Khan said. “This Facebook group was where I began that journey.”

I can relate to some aspects of Khan’s story. Before I converted to Islam, I found a community of Black people in Minneapolis that included a significant number of LGBTQ Muslims who I mostly met online. I fell into the group by accident long before I considered converting; but after I did, digital spaces allowed for me to strengthen my bonds with LGBTQ Muslims both in and outside of my city. I’m a part of the same Radical Muslims Facebook group that Khan is and, although I can’t remember for certain if that’s where we connected, I know we first met online. Without these digital spaces, my conversion process and first year as a Muslim would’ve been much more difficult—or may not have happened at all.

While access to the internet is allowing LGBTQ Muslims to forge community in new ways, the use of group chats seems reminiscent of the popularity of pen pals among LGBTQ Muslims before the internet existed. Khan said she heard stories from Muslim elders who would use anonymous signed letters to form pen-pal groups with elaborate plans ready in case a family member got ahold of a letter first. Khan added, “There would be (and still is) a lot of secrecy around when and how they would hold physical, in-person meetings, and how they would surreptitiously communicate the time and place.” I became aware of digital LGBTQ Muslim spaces long before converting. But I was aware of them as somebody on the sidelines; catching sneak glimpses based on who my friends spoke to or retweeted.

From my friends, I learned that LGBTQ Muslims carved out their own digital spaces rather than just seeking out the broader Muslim or LGBTQ communities for a number of reasons. Amina, an Iranian Irish queer Shia Muslim, told Bitch, “At the risk of being repetitive, I think these spaces are so fucking important because LGBTQ Muslims face violence and ostracization from Muslim communities as well as LGBTQ communities. LGBTQ Muslims face homophobia alongside Islamophobia and depending on our other identities, a plethora of other forms of violence.” The rise of homonationalism is one of the most notorious examples of Islamophobia within LGBTQ spaces: In her 2007 book, Terrorist Assemblages: Homonationalism in Queer Times, queer theorist Jasbir Puar defines homonationalism as a “discursive tactic that disaggregates US national gays and queers from racial and sexual others, foregrounding a collusion between homosexuality and American nationalism that is generated both by national rhetorics of patriotic inclusion and by gay and queer subjects themselves.”

As broken down by Sara R. Farris in a 2018 Social Text article, Puar’s homonationalism is partially meant to describe “the moboilization of gay rights against Muslims and racialized Others within the American nationalist framework.” Homonationalism in the United States includes advocating for more LGBTQ people in the military, which then bombs Black or brown LGBTQ people who are apart of the Other abroad, LGBTQ people supporting President Donald Trump, and forming hate groups like Gays Against Islam. Beyond the United States, pinkwashing, an Israeli propaganda strategy that exploits LGBTQ rights in order to falsely portray Israel as progressive in contrast to Palestine, is another example of homonationalism. By positioning Palestinians as exceptionally homophobic and transphobic, Israel makes them seem deserving of occupation and apartheid policies—despite the fact that LGBTQ Palestinians are also victims of genocide.

For LGBTQ Muslims, digital spaces are vital to combat what seems like near constant assaults on our very being. As outlined by Khan, Facebook is a key site for LGBTQ Muslims to connect online, but it isn’t the only one. Venus, a Black Muslim lesbian, said she first began finding community on Tumblr before branching out to Instagram and, now, Twitter. Venus told Bitch, “I’ve been on the internet since I was 12, which is common for my generation. Besides the issues and dangers with that, I also owe a lot of who I am now to what I’ve been taught and the community I’ve found through it.”  Zee, a Black nonbinary Nigerian Muslim, also told Bitch, “I’ve mainly seen LGBTQ Muslims form communities through group chats or social media that allows us to be anonymous.” Even in digital spaces, secrecy is often still a necessity.

Zee cofounded Muslim Association for Sexual and Gender Diversity, an LGBTQ Muslim group at their university, that utilizes secure group chats and anonymous profiles on Twitter in a lot of their communications. Zee said, “Private spaces can allow for the safety and security that an already established community of LGBTQ Muslims may need….Having a sense of privacy and control is important for members of LGBTQ Muslim spaces because a lot of the time it feels like we don’t get to have that.” LGBTQ Muslims do form public platforms, though, which are vital for the distribution of resources like the “I’m Muslim and I Might Not Be Straight” or “I’m Muslim and My Gender Doesn’t Fit Me” pamphlets created by the Muslim Youth Leadership Council, a group that both Khan and I are a part of.

There are also a number of LGBTQ-friendly masjids offering virtual services, such as Chicago’s Masjid al-Rabia—which I am on the board of—and the international organization El-Tawhid Juma Circle: The Unity Mosque. Muhammad, a queer Muslim who attended Al-Tawhid’s virtual services during Eid, told Bitch, “For many queer Muslims, the question of literacy is really important. Many folks don’t really know that there are progessive and inclusive resources, communities, and theologies out there. It is so important for us all to share these resources in the hope that it could help others in these struggles for meaning, community, and ethical flourishing.”

Khan said she heard stories from Muslim elders who would use anonymous signed letters to form pen-pal groups, with elaborate plans ready in case a family member got ahold of a letter first.

Lastly, digital spaces can combat some of the media’s dominant narratives regarding Muslims, who are often imagined as Arab or South Asian and nothing else. Zee said, “I rarely see portrayals of Black Muslims in the media, so it means a lot to me to be able to meet and talk to other Black Muslims in digital spaces about experiences we deal with (anti-Blackness within Islam, as well as Islamophobia outside of Muslim spaces).” Black LGBTQ Muslims’ digital strengths can be seen with projects like Taylor Amari Little’s “Queer Ummah,” which is meant to document LGBTQ Muslims’ stories, and in the online presence of nonbinary Sudanese music artist, Dua Saleh.

Unfortunately, at the same time that digital spaces can be beneficial for Black Muslims, Amina pointed out that digital Blackface remains a problem, saying, “There are ways in which Black culture is consumed and appropriated and then packaged as part of our identities… This comes out in digital realms, in how we dress, how we speak—and the thing is, when we know that this performance can hinder us in any way, academically, professionally, etc, we shut it off—but we also refuse to admit that it’s because of anti-Blackness that we know we have to shut it off.” This can be seen in the way Black Muslims’ online cool is often co-opted for the benefit of non-Black or non-Muslim populations.

The problems that arise in digital LGBTQ Muslim spaces don’t combat the necessity of their existence. And while Muslims must battle surveillance concerns on social-media platforms like Facebook and Twitter, they can still be used to create something that is valuable and deeply necessary. As Venus said, “We create these spaces because we usually can never find them anywhere else. We need our very own because whether in Muslim communities or LGBTQ communities we are always somehow pushed back and forth between the two, never quite finding where we may belong, or simply exist. There is so much healing in these spaces we make for ourselves, so much mercy, so much more of true Islam than someone may ever seen before.” 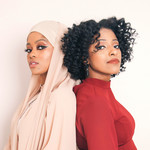 by Vanessa Taylor
We run the internet, even if the rest of y’all aren’t aware of it.