“Like a Boss” Takes Down a “Girlboss," But Misses the Mark on Comedy | Bitch Media

“Like a Boss” Takes Down a Girlboss, But Loses Its Sense of Humor 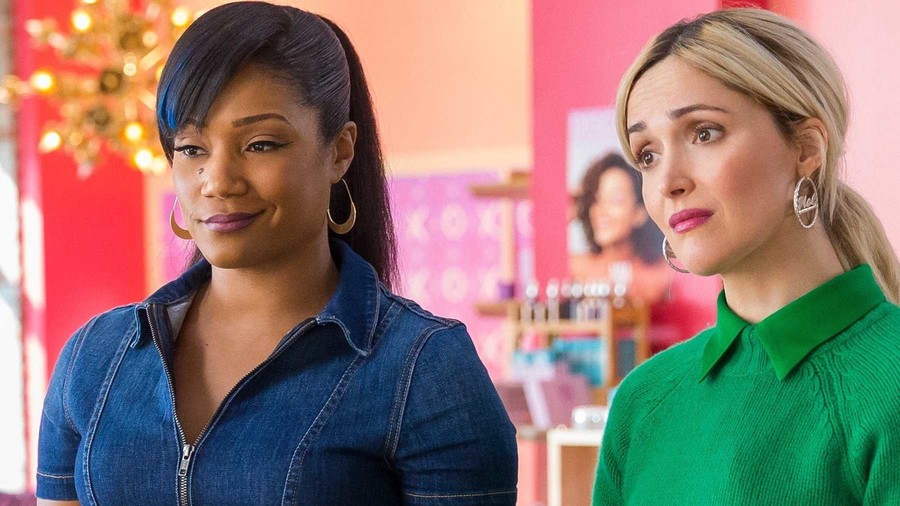 Tiffany Haddish as Mia, left, and Rose Byrne as Mel in Like a Boss (Photo credit: Paramount)

I went into Miguel Arteta’s Like a Boss prepared to enjoy the film’s message, and, if nothing else, to laugh. But I was surprised that the premise I was promised, along with the humor inherent to the cast, didn’t land. In pursuit of such a specific message—targeting the toxicity of “girlboss” culture—the film simply didn’t nail its objective, leaving only moments of physical comedy to really sparkle amid a long list of not-so-funny jokes. The film’s premise is uplifting: Best friends Mia (Tiffany Haddish) and Mel (Rose Byrne) have created a makeup company together.

Though Mel & Mia’s focuses on beauty, the company distinguishes itself by treating makeup as a form of empowerment instead of a way of playing into the male gaze’s sexy ideal. (Mia & Mel’s approach feels almost Glossier-esque, putting a new spin on “skin first, makeup second.”) Mia and Mel have known each other for ages, though they come from different backgrounds: Mel had a rough home life, so she leaned on Mia for support; Mia began leaning on Mel for comfort after her mother’s death. Now, they do everything together, including founding a company and living together in the house Mia inherited from her mother, which eventually leads to a conflict driven largely by lack of communication and lack of honesty.

Mel is the numbers-driven partner who stresses regularly about their finances, including the debt they’ve accrued from owning a storefront instead of sticking solely to online sales. Mia is more creative, whirling around the store and crafting new product ideas. They’ve managed to skirt around the conflict brewing between them—until one of their extremely wealthy competitors, Claire Luna (Salma Hayek), offers to buy their company. Claire comes across as a strong, empowered woman: She owns her own business; she’s glamorous; and, most important, she invests in other women. She convinces Mel and Mia that she’s the right woman to invest in their company by promising to pay off nearly $500,000 of their debt and guaranteeing she’ll invest further—if they impress her by wooing potential clients at a launch party.

Claire’s also a classic businesswoman who always prioritizes own interests. “Business and friendship don’t always mix,” Claire says to the women, planting a seed that can easily be deciphered: She’s going to try to destroy Mel and Mia after gaining their trust. Claire is framed as an evil and money hungry businesswoman who wants to succeed at all costs: The moment Mel and Mia sign Claire’s contract, she begins twisting their messaging, going as far as pitting them up against two men who have crafted a makeup company specifically designed to make women “hotter” to garner more attention from men. When Mel and Mia are forced to compete in a competition with these men, they create a soft, nearly natural look on a young woman, while the men go all in, making her as matte and poreless as possible, adding heavy eye makeup and finishing with a glossy red lip.

While Mia defends their softer look, Mel starts contouring their client’s face so they better compete. Moments like these would’ve been stronger if Mel and Mia were aligned; instead, the film undercuts its own messaging, prioritizing Mia and Mel’s frustration with each other rather than walking us through the look of disappointment on the model’s face, the language used by the men as they make the young woman “hotter” in their own eyes (because adult men trying to make young women sexier is disgusting), and fleshing out the impact of makeup as art versus makeup as a weapon of patriarchy. The message feels tangled and ultimately falls flat. As the film continues, Claire tries to tear Mel and Mia apart to satisfy her own capitalistic interests, but she’s unsuccessful; Mia and Mia not only manage to build a new brand that isn’t controlled by Claire but they’re also able to maintain Mel & Mia’s under her umbrella to generate additional profit.

The genre of the buddy comedy seemed as if it would lend itself well to the film’s goal of calling out girlboss culture and girlbosses themselves; after all, why watch a dark and distressing documentary on girlboss culture when you can watch a comedy? There was great promise in the cast as well, as viewers are gifted Haddish and Byrne alongside Billy Porter and Jennifer Coolidge, both comedic icons in their own right. Mia and Mel’s genuine friendship is supposed to create a contrast between their connection, which is based in loyalty and love, and Claire’s relationship with her partner, played in a cameo by Lisa Kudrow, which is about individual success at all costs. (Claire tosses her partner aside to build her own company.) In pursuit of this lofty goal, however, the film’s actual becomes secondary.

There are jokes about weaves: When Mia yanks off her own ponytail before leaping into a pool, a white friend comments, “That’s not her real hair?” “It’s a cultural thing,” Mia and Mel’s friend Jill (Natasha Rothwell), explains to their mostly white friend group). And there are many jokes about sex: The film opens with Mia telling Mel about a dream she had about having sex with Barack Obama, leading the women to question why dream sex is so much better than their actual sex lives. Coolidge feels massively underutilized, with jokes so bland they could’ve been said by really anyone, and Porter, though lovely in the moments he does appear onscreen, also left me wanting more; I could’ve definitely used more jokes from him than the film’s emphasis on joking about Mel being a pushover and Mia being bossy over and over again.

The moments that stood out most were the ones that involved physical comedy rather than one-liners meant to shock and impress. In one early scene, Porter’s character Barrett, the artist on Mel and Mia’s team who handcrafts their makeup products, is fired when their company is bought out by Claire. Mel and Mia invite Barrett to lunch to fire him, as they’re worried he’ll make a production of his firing, and he lives up to his reputation: As the women bicker between themselves over who’s the one who should be blamed for him losing his job, he shouts that they need to calm down and give him their attention. Clapping to punctuate each word, Barrett says, “Witness my tragic moment.” Satisfied with his audience, he begins his production; his expression shifts drastically, he rises from his seat at their chic brunch table and seems to glide slowly through the restaurant, eventually walking out only to come back and slam his body against the glass window, his pout sad and his eyes glossy, as onlookers stare on, confused and concerned.

There’s another strong moment when Mel, frustrated by Mia’s suspicion about Claire and disinterest, essentially poisons Mia: During a cooking class they’re taking with the rest of their friend group, Mel sneaks into the kitchen, chops up ghost peppers, and hides them in Mia’s food. Haddish shines here: Rather than the hypersexual jokes she drops every few scenes, she chokes, coughs, and slams her hands on the table in a way that’s perfectly melodramatic and engaging. We watch Mia chug water and milk, realizing in the process that Mel, ashamedly hiding behind the rest of her friends, is the reason her mouth is on fire. Watching this dynamic is much more interesting than listening to Mel and Mia hash out their issues as is common throughout the film, as we see them go back and forth way too many times for it to remain interesting, insulting each other and bickering the way that, I imagine, the film’s male writers imagined women speak to each other.

The dialogue itself felt stilted and generally unfunny, but in moments like these, the jokes land more successfully because Haddish and Porter physically engage with the world around them. Like a Boss isn’t an absolutely awful movie. It has a diverse cast and is clearly trying to make a statement about women being able to be business together without being catty and about capitalism ruining business relationships forged in good faith. But it’s unclear which of these goals the film prioritizes; I left the film with more questions than answers: Why does this woman want their company? Why does she care about their friendship? Why do they call her a “Mexican Barbie doll” like it’s some sort of empowered insult? If films like Like a Boss hope to hold their own in an environment that is slowly but surely becoming saturated with more films attempting to make a feminist statement, they need to actually put in the work. Otherwise, these films risk becoming just another random comedy trying to one-up the boys rather than something memorable that makes an impact—or at least makes the viewer crack a smile.