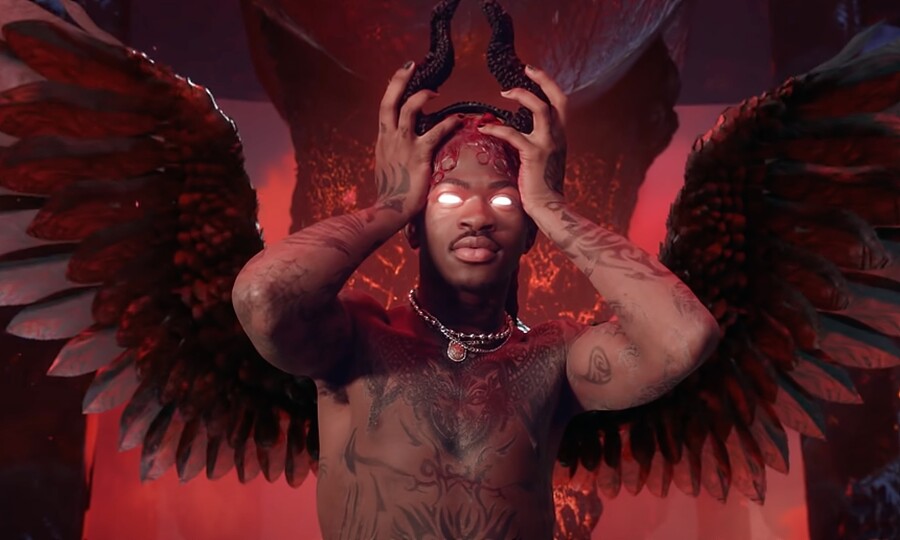 Lil Nas X in the “Montero (Call Me By Your Name)” video (Photo credit: Screenshot from YouTube/Lil Nas X)

On March 26, Lil Nas X’s music video for “Montero (Call Me By Your Name)” caused waves online. Conservative and Christian commentators responded with outrage to the video’s visuals, which are overtly queer and subversively play with religious imagery, including the concepts of heaven, hell, and the devil. The singer-songwriter who rose to fame in early 2019 with the hit “Old Town Road”—a song that was controversially removed from Billboard’s Hot Country Song list for not being country enough—came out publicly in summer 2019. Lil Nas X, who is well known for his mastery of social media and trolling, wrote on Twitter of his queerness, “deadass thought I made it obvious.”

Now, in his latest video, Lil Nas X unequivocally embraces his queerness through the tradition of queer blasphemy to the absolute despair of conservative Christian people across America—and to the triumph of queers everywhere who have been historically rejected by organized religion. “We are in a fight for the soul of our nation. We need to fight hard. And we need to fight smart. We have to win,” Kristi Noem, governor of South Dakota, tweeted in response to the video. Other critics of the video said they were concerned about Lil Nas X’s influence on children: “I think the biggest problem for me is the fact he don’t understand ‘Old Town Road’ is every kid’s anthem,” tweeted rapper Joyner Lucas. “Children love him for that record. They tuned in and subscribed to his channels. So with no disclaimer he just dropped some left field ish and all our kids seen it.” Across the internet, horrified Christians and homophobes commented that the rapper had “sold his soul” and owed them an apology for warping religious concepts.

Though we can ask whether Lil Nas X is “allowed” to play with Christianity, there are more pressing questions: What is the impact of being taught that queer love and companionship will land you in hell? What happens when the very way you romantically relate to other people is pathologized as demonic and you’re actively encouraged to hate that part of yourself? “Montero” is a response to how growing up queer in a Christian society breeds self-hatred, sexual repression, and internalized homophobia; his performance of queer blasphemy proclaims that he prefers to be the devil if it means he gets to love and fuck whomever he wants.

Does Lil Nas X play with Christianity in his music video? Sure, but it’s nothing new. In “Montero (Call Me By Your Name),” a song named after the rapper’s own name and whose parenthetical is in reference to the 2017 movie Call Me By Your Name, a romance about two men, Lil Nas X uses temptation and damnation—religious imagery that has been used to instill fear, shame and self-hatred in queer people—to reclaim his sexuality. There’s been a long relationship between queerness, religious blasphemy, and pop culture: Queer musicians have been drawn to queering religious imagery in response to the violent homophobia being taught by religious institutions. “Montero (Call Me By Your Name)” is only the latest expression of this. He’s challenging the ways his sexuality has been cast as deviant by Christianity through an embrace of the demonic. From George Michael’s “Faith” and Madonna’s “Like a Prayer” to Depeche Mode’s “Blasphemous Rumours” and Lady Gaga’s “Judas,” Lil Nas X is continuing a tradition of queer blasphemy, both embracing his deviant queerness and giving queers around the world something unflinchingly queer to worship.

But Lil Nas X adds to the queer blasphemy tradition by inhabitating the intersections of being Black, queer, and male. The violence of colonization and slavery is inextricable from Christianity, which carries the cultural imposition of white supremacy and heterosexuality, stigmatizing African religious practices as satanic. As such, Lil Nas X brings together intersections that were stifled by Christianity that go beyond the queer; the imposition of Christianity on enslaved Black people in America and other colonized countries was a violent tool of domination that erased African cultures that had flexible views on sexuality. Historically, Black musicians and rappers have responded to this tool of domination and stigmatization of Black practices and bodies. Black music genres like rap and blues have always played with the satanic: Robert Johnson’s 1911 “Me and the Devil Blues,” Big L’s 1993 song “Devil’s Son,” and Tyler the Creator’s 666 crew rap collective are just a few of many examples.

The way Lil Nas X makes these intersections visible without apology fuels the satanic panic in response to the video. “Montero (Call Me By Your Name)” offers up a blatant rejection of a cornerstone of white Christian America: the white heterosexual family. While many artists have received backlash for their satanic art, Lil Nas X is receiving pushback because he’s a Black gay feminine man rejecting the white heterosexual culture imposed on him and his ancestors for generations. “In life, we hide the parts of ourselves we don’t want the world to see,” the singer says in the prologue of the music video. “We lock them away, we tell them no, we banish them. But here, we don’t. Welcome to Montero.” In the Garden of Eden, Lil Nas X is tempted by a cunningly sexy snake (played by himself), who follows him as he tries to avoid giving into temptation. Instead, he makes out with the snake, resulting in a divine trial where he’s publicly shamed for his “sexual sin.” During the trial, Lil Nas X stands out—he’s the only man dressed in pink and he’s held in place by several shackles—while the guards and the judges (who he also plays) who will decide his fate are dressed in blue. Though Lil Nas X plays multiple characters in nearly all his music videos, this particular scene is significant because he’s portraying both his temptation and the people who judge him for “giving into” the temptation of same-sex attraction.

Amid the messiness of queerness and the internalization of homophobic religious morality, people become their own wardens; they’re both their queer selves and the self who hates their queerness. Lil Nas X knows this well: “I spent my entire teenage years hating myself because of the shit y’all preached would happen to me because I was gay,” he tweeted after the release of the video. “So I hope you are mad, stay mad, feel the same anger you teach us to have towards ourselves.” While he’s shackled for his sins, the characters watching the public trial ostracize him, expressing their outrage by throwing objects at him. He gets hit in the head by a butt plug, dies (again, he’s nothing if not hilarious), and ascends to heaven. But he ultimately elects to change his path by enthusiastically sliding down a stripper pole on his way to hell. Wearing nothing more than thigh high boots and tight boxer shorts, Lil Nas X plunges toward self-acceptance—if being queer is deviant, he will embrace that deviance in the most outrageous and erotic way possible. As he lands in hell, he seeks out Satan, twerks on him, and gives him a lapdance. But the ultimate self-acceptance goes beyond satanic eroticism—Lil Nas X snaps Satan’s neck and places the devil’s horns on his own head. In the video’s final sequence, Lil Nas X’s eyes shine with a demonic flash as he grows devil wings: He is the incarnation of evil now.

Lil Nas X’s critics fail to reckon with the idea that spending centuries telling LGBTQ people that they’re inherently evil might just lead them to embrace being demonic to spite those who oppress them. Christianity makes queerness a living hell for queer people, so what could be so bad about twerking on Satan? This is the story of the millions of queers around the world, raised under the unyielding rule of anti-queer, unmoveably heterosexual Christianity. It was drilled into us that we would burn eternally if we dared to love or feel pleasure with those we choose. In an Instagram post on the day of the video’s release, Lil Nas X wrote a note to his 14-year-old self: “I know we promised to never come out publicly, I know we promised to never be ‘that’ type of gay person, I know we promised to die with this secret. But this will open doors for other queer people to simply exist.” He’s releasing himself from outward stigma and internalized self-hatred, even if it means plunging into the demonic eroticism of Satan’s bulge—and he’s not letting anybody come remotely close to stopping him.